Kerri Einarson and Brad Gushue have made it official that they will be competing as a team at the upcoming mixed doubles national championship set to take place in mid-March at the Calgary bubble.

“I’m so excited for it. It’s definitely going to be lots of fun and I’m looking forward to teaming up with Brad and having the fans cheer us on,” Einarson told CBC Sports.

The two skips are still trying to figure out who’s going to be doing most of the sweeping.

“I think we’re going to play like skips, throw it pure and watch it go,” Gushue said. “I don’t think there’s going to be a lot of high-intensity sweeping. For both of us, we haven’t swept that much in a long time. We’ll make it up as we go.”

Both teams did not get the chance to represent Canada at the world championships due to the pandemic.

Einarson, who has never played in a competitive mixed doubles event before, says she’ll be leaning on Gushue.

“I’m pretty excited about it. I haven’t played mixed doubles before. Brad will have to teach me the ropes,” Einarson said.

“Brad sent me a text message this summer asking if I was interested in playing mixed doubles. I had been wanting to play and had been asked to play by a few people. Brad is such an amazing player and so smart on the ice I couldn’t say no.”

Einarson one of the best rock-throwers

Gushue, who previously played with Einarson’s third Val Sweeting, said he was considering a number of other curlers but considers Einarson one of the best rock-throwers in the game.

“If she plays like she did at last year’s Scotties, we’re going to be a force. I watched her at the Scotties last year and was so impressed with her skill level and composure. Her draw weight was so good,” Gushue said.

There’s just one hitch: while Einarson and Gushue will both be competing as Team Canada at the Scotties and Brier in the Calgary bubble, they may not actually get the chance to practise together once before heading into the mixed doubles national championship.

“I’m not exactly sure what it looks like yet. We might get some practise ice before we play a game,” Einarson said. “You just get thrown into it because you know you haven’t been on the ice together.”

Gushue isn’t overly concerned about how much time they’ll get on the ice prior to the national championship, which is scheduled to begin March 18 at the Markin McPhail Arena in Calgary.

“If she plays like she did at last year’s Scotties I don’t have to do very much,” Gushue said. “She can be so good when she’s on. I think if she’s hot during that week it’s going to give us one hell of a shot at winning it.”

Since mixed doubles was added to the Olympic program prior to Pyeongchang 2018, Canadian curlers have certainly started focusing on the new discipline in a much more meaningful way.

John Morris and Kaitlyn Lawes became the poster children for the sport after not only winning the first-ever Canadian Olympic qualifier trials but the historic inaugural Olympic gold in the sport.

It’s been well documented the two only practised for about 30 minutes on ice in Winnipeg before entering the trials.

The one concern for Einarson and Gushue, because the ultimate goal would be to represent Canada at the Olympics, is that should either of their foursomes earn a berth to the 2022 Beijing Games, they would not be able to compete in both disciplines as it stands right now. 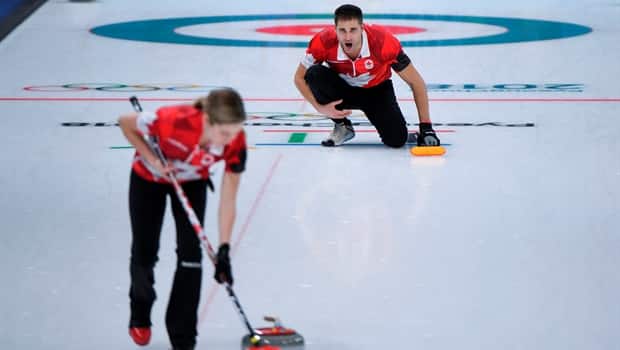 Canada will go down in the history books as being the first country to win gold in mixed doubles curling. The team of Kaitlyn Lawes and John Morris beat Switzerland 10-3 in the final. 12:17

Curling Canada has said that it does not want athletes competing in both events at the Olympics, mostly to ensure both teams are as rested and prepared as possible.

But both Gushue and Einarson disagree with that decision.

“I didn’t necessarily agree with that decision the first time around. If you’re committed to a team, I think you should have the opportunity to play it out to the end. If you win both, good for you. It’ll be busy but it’s upon you to figure out how it’s all going to work,” Gushue said.

“That would be pretty special for that individual and for the sport.”

The mixed doubles Olympic qualifiers will most likely take place in early January 2022 in a host site that has yet to be determined. Because of the pandemic Curling Canada is still trying to figure out how teams will qualify for the event.