Kendall Jenner and her best friend Hailey Bieber are back to working out after enjoying a wild weekend in Aspen to ring in 2023.

The Vogue models were seen with damp hair and workout clothing on as they left a hot pilates class at Get Hot inside Sunset Plaza in Los Angeles on Tuesday. Classes cost $40 each.

They walked one after another to their cars in the parking lot as they failed to crack a smile on the rainy afternoon.

Sweat session: Kendall Jenner and her best friend Hailey Bieber are back to working out after enjoying a wild weekend in Aspen to ring in 2023

Hot ladies in a hot situation: The Vogue models were seen with damp hair and workout clothing on as they left a hot pilates class in Los Angeles on Tuesday

Kendall wore a navy blue bra top with matching high-waisted leggings as she added a chocolate brown leather jacket that was worn open.

The cover girl also had on white sneakers with matching socks.

And the ex of Devin Booker pulled her wet hair back in a messy bun as she added sunglasses and a face mask.

The Keeping Up With The Kardashians veteran looked distracted as she focused on her cell phone while walking to her vehicle. 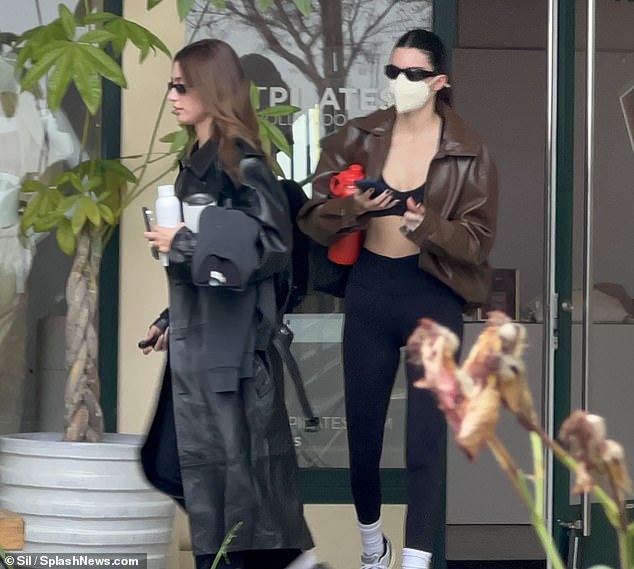 No miles here: They walked one after another to their cars in the parking lot as they failed to crack a smile on the rainy afternoon 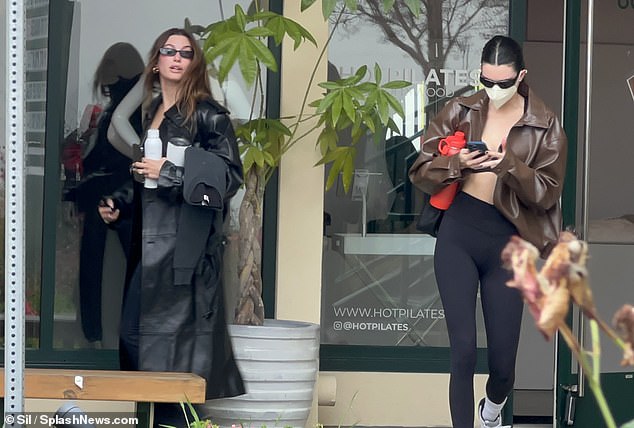 Bye bye lady friend: They went their separate ways out of the building 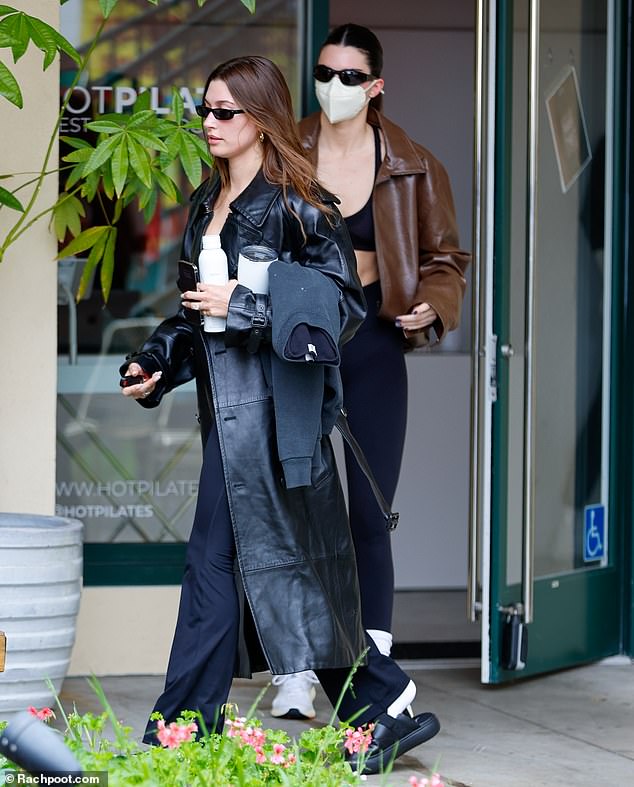 A fancy place to break a sweat: The classes cost $40 each, per the Hot Pilates website

Also in her hands was a large cherry red water bottle.

Hailey looked like she had just stepped out of the Matrix as she had on an oversized black leather coat with a heavy collar and a belt.

Underneath the wife of Justin Bieber had on black workout clothing and she added black slippers.

The star wore her dark brown hair down and she added very thin sunglasses as her hands were full with a cell phone, a water bottle and a Thermos. 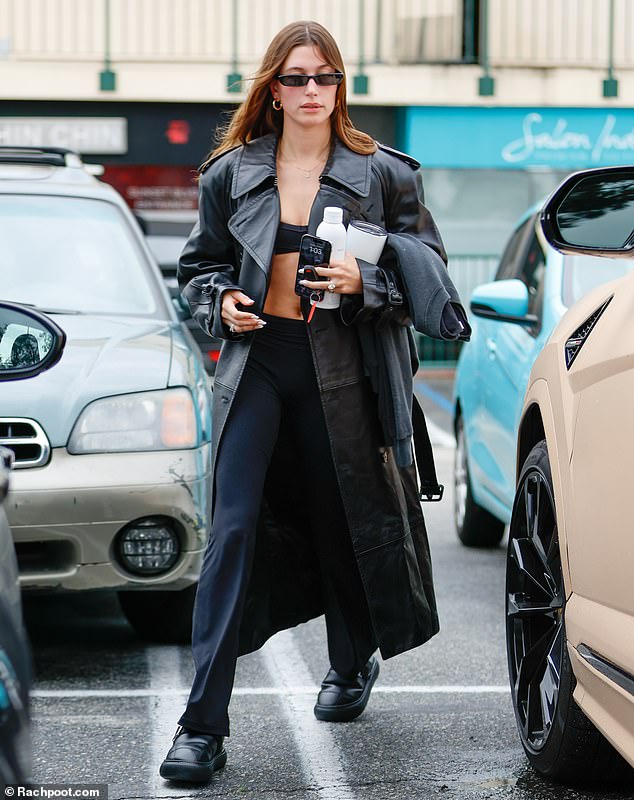 All that’s missing is Keanu Reeves: Hailey looked like she had just stepped out of the Matrix as she had on an oversized black leather coat with a heavy collar and a belt 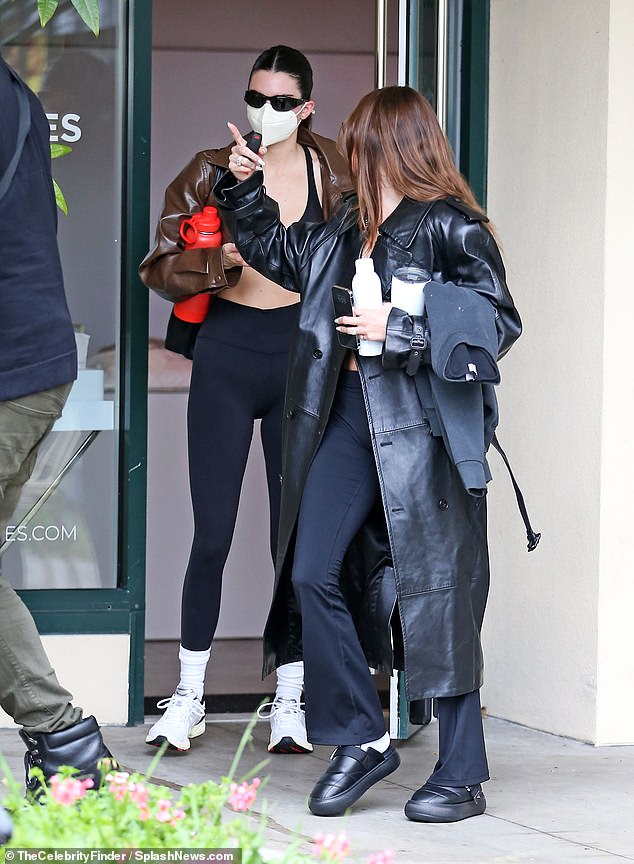 Busy Hails: Underneath, the wife of Justin Bieber had on black workout clothing and she added black slippers

Oddly, she had on her massive diamond engagement ring from Justin which seems like a very pricey piece of jewelry to wear to a workout session.

This comes after Kendall partied with Hailey, her husband Justin, as well as sister Kylie Jenner in Aspen.

Also along was Kylie’s daughter Stormi and her best friend Stassie Baby.

Kendall and Hailey were seen not only heading to dinner with the group, but also hitting the slopes. They were spotted flying back to Los Angeles on Monday.

Kendall appears to still be single.

In late November it was claimed she didn’t have an ‘awful breakup’ with Devin Booker. 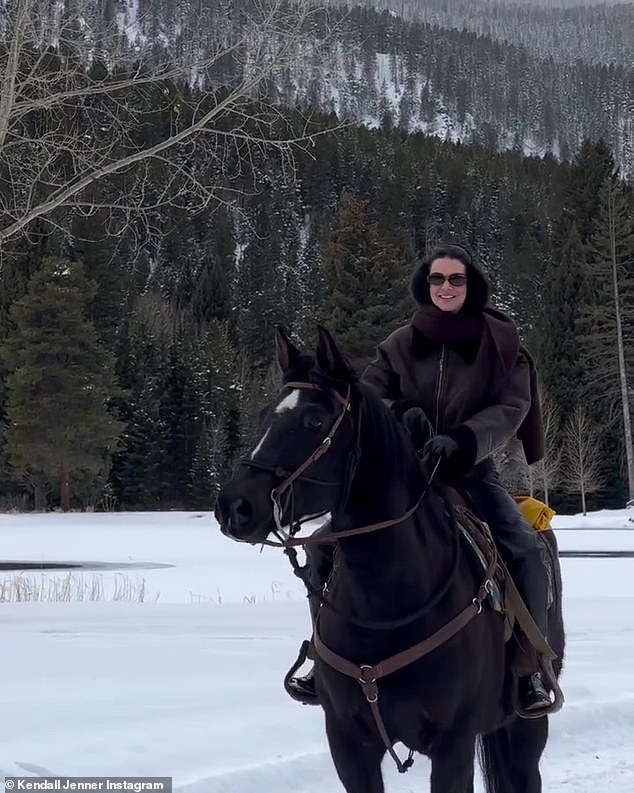 In her happy place: In Aspen over the weekend, Kendall was seen riding a horse in the snow 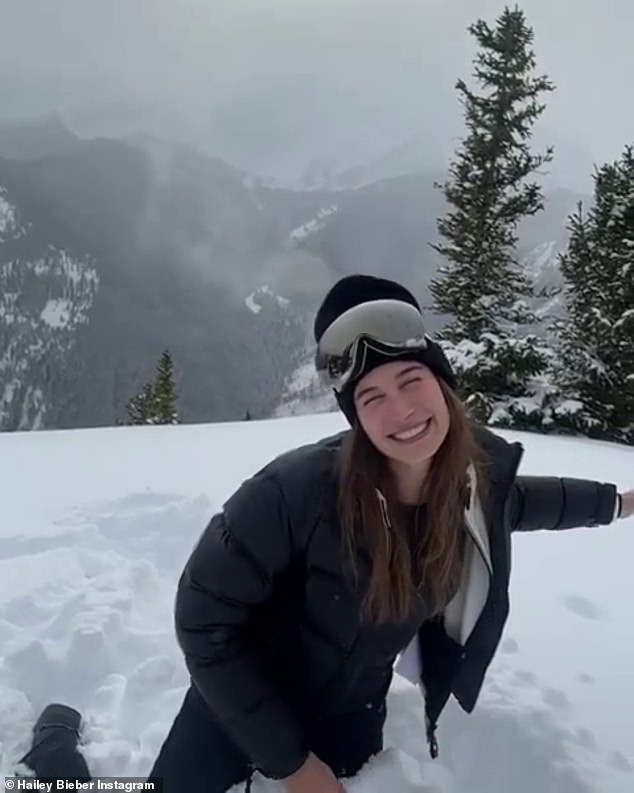 Mrs Bieber was full of joy on the mountain: Hailey had her goggles on her head

The 27-year-old model had been in an on/off relationship with NBA player Devin, 26, since 2021 and although the pair are said to have ‘quietly’ split for a second time in October, a source close to The Kardashians star has alleged that their breakup was merely a result of scheduling issues.

The insider told E! News: ‘Their schedules weren’t lining u and eventually the relationship really took its course. There’s no bad blood. It wasn’t an awful breakup.’

The insider went on to claim that 818 Tequila founder Kendall is in ‘great spirits’ since calling it quits with Devin and is focussing on taking her company to the ‘next level’ so is not interested in finding someone new.

The source added: ‘Kendall is in great spirits since the split. She’s been really busy and is trying to take her company to the next level, and is really focused on work. She’s not really open to dating right now.’ 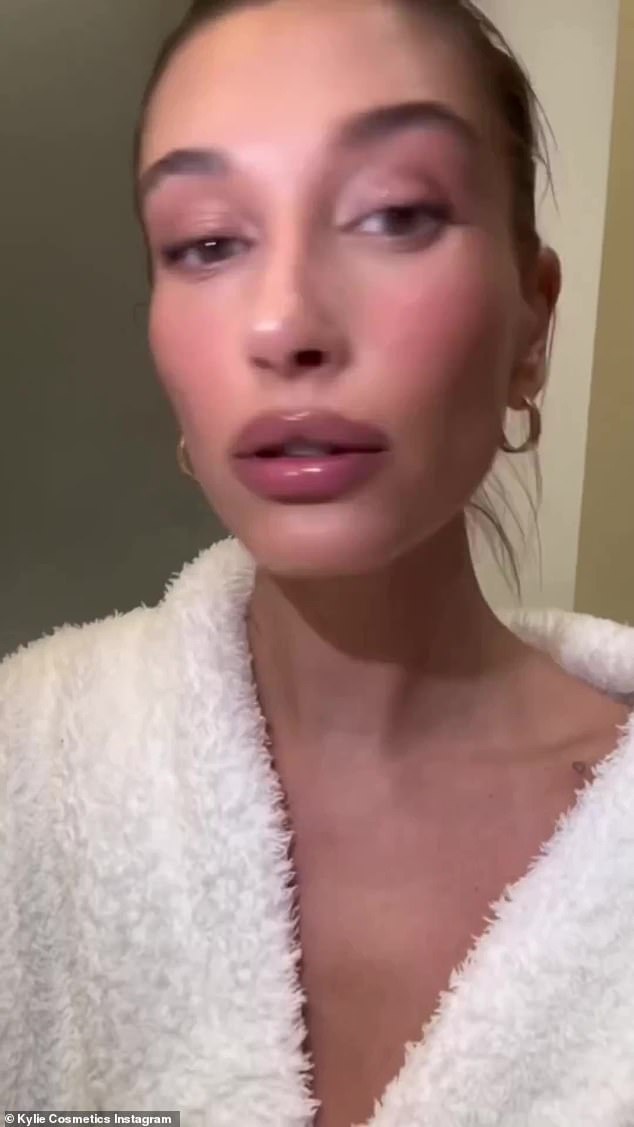 Also: On Tuesday Hailey was also seen on the Kylie Cosmetics Instagram page taking care of her skin 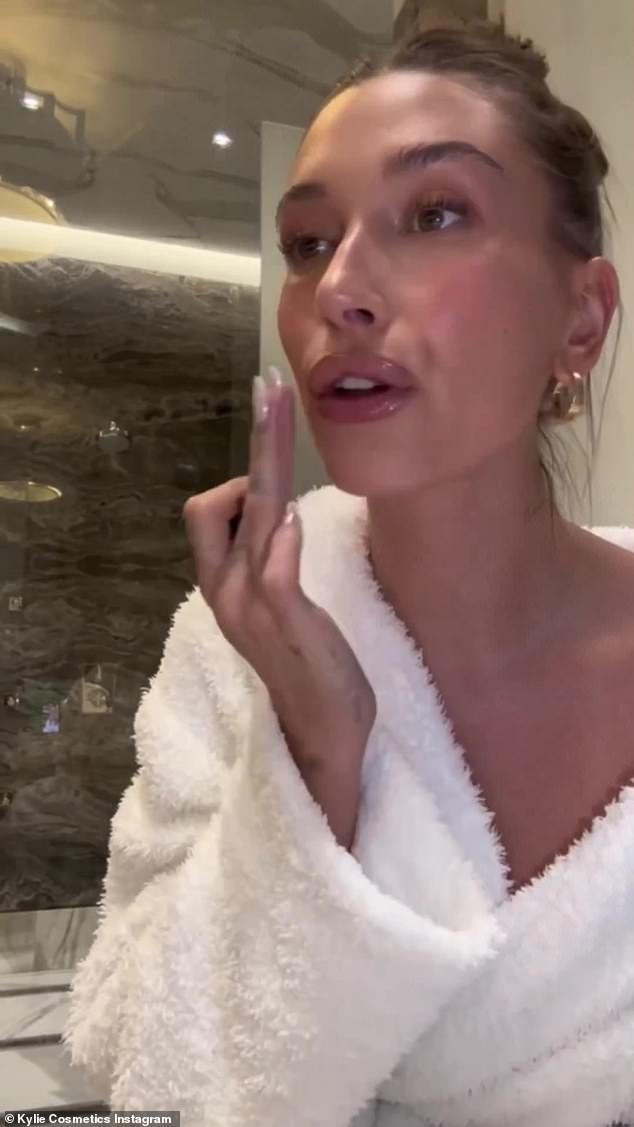 You glow for it, girl: The daughter of Stephen Baldwin had on a white robe as she touched her face

However, the comments come just days after it was alleged that Kendall and Devin still plan to keep in touch with each other despite calling it quits.

A source said: ‘They have a lot of love and respect for each other and wish only the best.’

The apparent split comes months after Kendall and Devon first split, with Page Six reporting in June they were on ‘different pages’ about their relationship.

An insider told the outlet: ‘While they care for each other, Devin was not going to propose marriage and his priority is his career. Kendall’s career also dominates her life.’

Not long after news broke they had ended their two-year relationship, the pair were photographed together at Soho House in Malibu. A source dismissed it as a ‘PR stunt,’ adding: ‘(Kendall’s) team does not want it to look like she was dumped. Her people requested the meet up.’ They were most recently spotted on a holiday together in Hawaii in August.