‘Do you want him to go back to medical school?’ Ken Hinkley defends Port’s team doctor for allowing Zak Butters and Tom Jonas back on the field after SICKENING collision and insists pair showed no sign of concussion after the game

The Power duo looked set to wrap Richmond halfback Liam Baker halfway through the fourth quarter of Port’s 77-65 loss at the MCG on Thursday night.

As Butters looked to drag Baker down from behind, the Tigers gun managed to evade his grasp, with momentum sending the former head-first into Jonas, who was looking to tackle the Richmond player.

The duo were immediately attended to by Port’s medical staff and left the field with Butters bleeding profusely from just above his nose and Jonas sporting a notable gash just above his eyebrow.

However, Butters rejoined the action after just six minutes, with Jonas re-entering the frame a couple of minutes later after being cleared by Power doctor Mark Fisher.

Given the violent nature of the collision it was surprising to see both players back on the field without undergoing a head injury assessment, but Hinkley dismissed any criticism of Fisher. 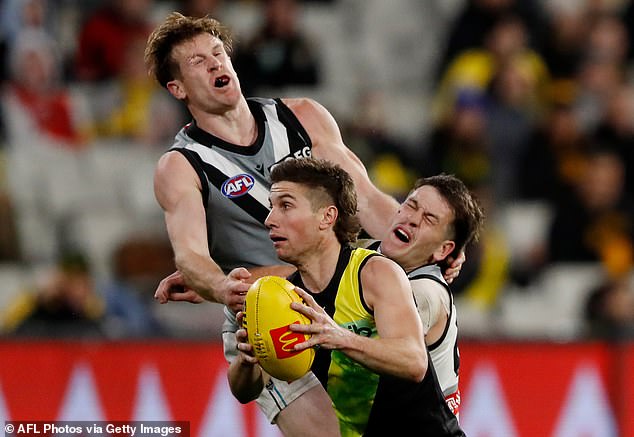 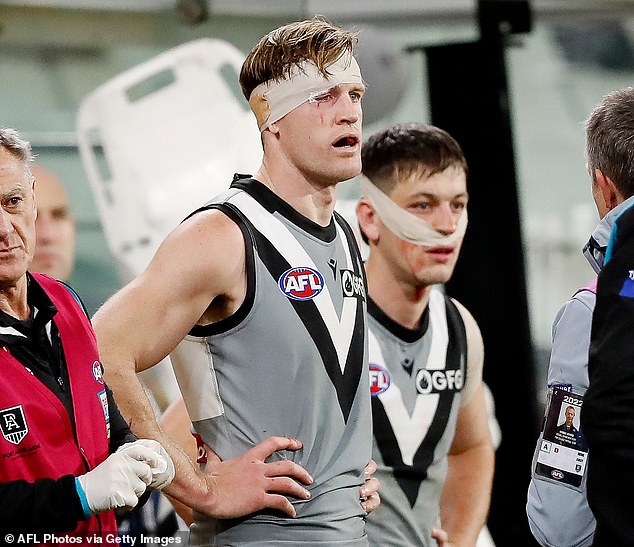 Despite the sickening clash, both Butters and Jonas rejoined the action after a few minutes

‘I gather there’d be some conversation around the collision, but people get cuts in games of football and they don’t get concussion,’ the Port coach said in his press conference after the game.

‘I’ve got a doctor who’s been with our footy club 25 years and the conversation between our doctor and our football manager during the game was these boys have got no issue with concussion.

‘If anyone’s got a challenge on that and they feel more qualified than Mark Fisher, who’s a 25 year AFL doctor, feel free.’ 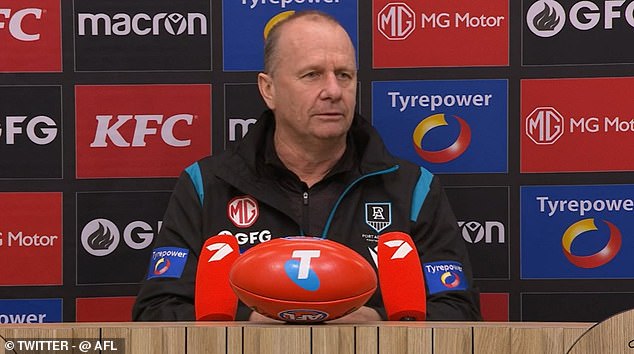 Asked a follow-up question on the incident, the Power coach replied: ‘I’ve got the most experienced doctor in the AFL making these decisions. Where do you want him to go? Go back to medical school?’

Hinkley also insisted doctors on the field were far better equipped and more experienced to make decisions than pundits and spectators watching from the commentary box or the sidelines.

‘We’ve got a very experienced doctor who has the utmost respect in the AFL. […] I trust the people who are running that part of our organisation in those facets of the game.’

Hinkley acknowledged the brutality of the impact, but added Butters and Jonas did not appear to show any sign of concussion when he spoke to them in the sheds after the game. 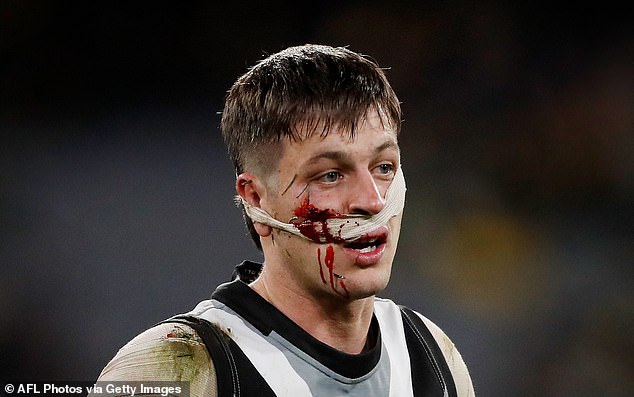 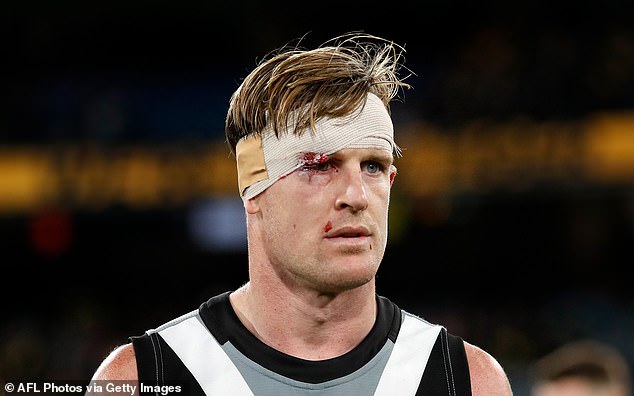 It is not the first time Port find themselves in hot water of their handling of a severe head collision.

Back in 2016, the Power were fined $20,000 – with half of the sum suspended up until 2018 – for rushing Hamish Hartlett back onto the field in a game against Hawthorn after just five minutes, instead of waiting 15 minutes as per league rules.

‘We accept we didn’t get it the way we should have got it,’ Hinkley said at the time.