Australia’s Kelsey-Lee Barber has entered the record books alongside names like Cathy Freeman. Jana Pittman and Sally Pearson with her historic gold medal javelin throw at the World Athletics Championships in Eugene, Oregon.

She becomes the first woman in history to go back-to-back in the javelin throw at the championships with her best throw in three years of 66.91 metres securing the gold medal.

Barber’s throw of 66.91 metres smashed the 64.05 metre throw from silver-medallist Kara Winger of the United States while Japan’s Haruka Kitaguchi claimed the bronze medal with a throw of 63.27 metres.

Barber notched up the historic win on her third throw, matching her booming final throw at the Doha world championships three years ago that rocketed her from fourth to first at the death.

Clutch throws are becoming a hobby for the 30-year-old who overcame a slow start to her Tokyo Olympics campaign in 2021 to snatch the bronze medal late on the final day of competition.

Barber’s performance – the best in the world this season – fell short of her personal best of 67.7m, but was well above her season’s best of 61.4m.

Kelsey-Lee Barber is an ALL TIME GREAT??

How clutch can one athlete be? Rocks up to majors in meh form. Says stuff that and produces monster throws every time. Ppl think “she can’t do it again can she?”…But she just does

The first athlete to defend the Women’s Jav title ever

Barber’s feat has been achieved before in Javelin by any woman. Only three other Australian woman have managed to claim back-to-back gold at the world championships in other events and Barber is now in very illustrious company.

Pearson completed one of the greatest sporting comebacks of all time to overcome two years of injury to claim the world 100 metres hurdles title at the age of 30 in 2017.

Freeman also made history by becoming the first Australian Aboriginal woman to win a gold medal at the world championships when she won the 400 metre sprint in 1997, a feat she backed up in 1999.

Jana Pittman rounds out the list after she claimed the 400 metre hurdles titles in 2003 and 2007.

Australia almost claimed two medals in the event, with 25-year-old Sydney medical student Mackenzie Little holding onto third place until the final round when she slipped to a heart-breaking fifth spot. 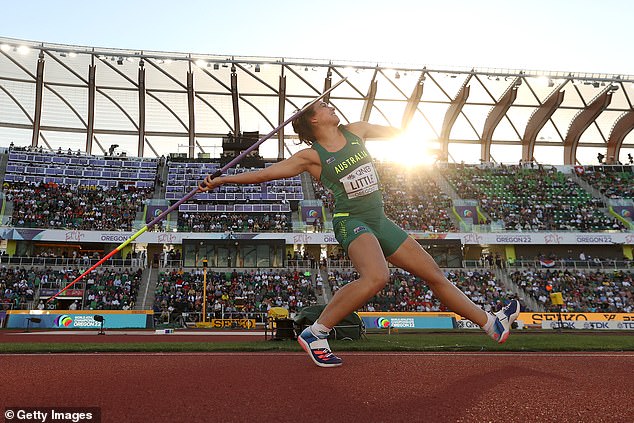 She threw a personal best of 63.22 metres with her first throw in the final to set the challenge to the rest of the field.

Unfortunately she was overtaken by China’s Shiying Liu [63.25m] and Kitaguchi who saved their best throws for last.

Australia’s previous best medal haul at a world championships was in 2009 when our athletics team claimed two gold and two bronze medals.

With two gold and a bronze already in the books, the Australian team now has a chance to make it our best-ever showing at a world championships.

Peter Bol will line up in the 800 metre final on Sunday while Olympic bronze medallist Ash Maloney will compete in the decathlon and both have strong claims on a medal.