Kellogg’s, Britvic and Mars are among the leading food and drink companies to slam Government plans that could see a ban on the online advertising of unhealthy foods.

In a letter to the Prime Minister Boris Johnson, bosses at Kellogg’s, Britvic and Mars joined other leading companies to attack the proposal and said the evidence underpinning the plans was ‘lacking in detail and efficacy’.

They also claimed the restrictions would ‘disproportionately impact’ on small and medium business which make up the majority of the sector.

The letter, signed by more than 800 food and drink manufacturers and 3,000 UK brands, comes after the Government proposed a ban on junk food adverts as part of its efforts to tackle childhood obesity and improve public health. 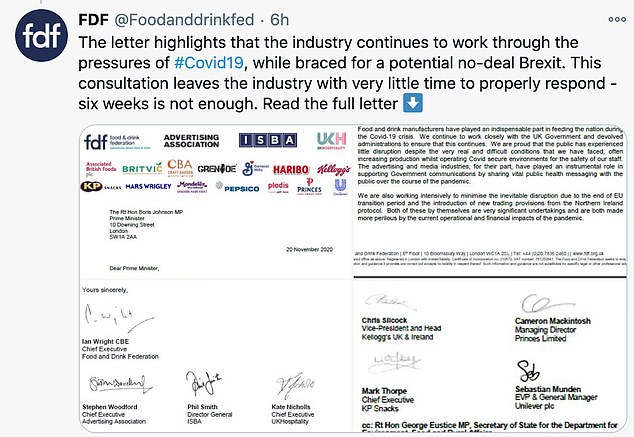 The letter was signed by more than 800 food and drink manufacturers and 3,000 UK brands

The proposed ban would stop firms from promoting foods that are high in fat, sugar and salt on online platforms such as Facebook, Twitter and Instagram.

The Department of Health and Social Care launched a six-week consultation earlier this month to try to understand the impact of introducing a total ban on advertising junk food online.

But in a letter to Prime Minister Boris Johnson, posted on social media on Sunday, food and drink industry leaders branded it a ‘disproportionate proposal with an impossibly short time period’ for response.

Bosses said: ‘The UK Government is quite correctly committed to evidence-based policy making.

‘However, the evidence base underpinning these proposals is lacking in both detail and efficacy.

‘Additionally, there is still no agreed definition of which foods the Government is including in these proposals.

‘They are so broad they even capture family favourites from chocolate to peanut butter to sausage rolls.’

The letter, which is also signed by the Advertising Association and UK Hospitality, said the industries were ‘shocked’ that the proposals would restrict how producers describe products on their website despite previous Government assurances that it had ‘no interest in doing this’. 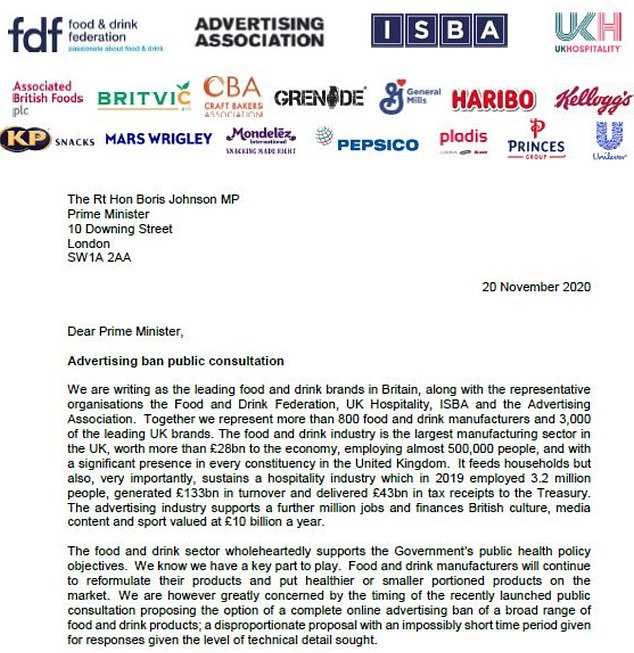 It added: ‘We have been shocked that the proposed advertising restrictions will police how producers describe their products on their own websites and social media channels, despite previous assurances that the Government had no interest in doing this.

‘Furthermore these restrictions disproportionately impact SMEs, who make up 96% of our industry.

‘Again, is it really the Government’s intention that a local wedding cake business, for example, would not be able to share product details on its Instagram account in order to grow its sales?’

The letter said the industry had a shared ambition to ‘drive a step change in obesity’ rates but said that with the ongoing coronavirus pandemic and with Brexit on the horizon it could not respond to the consultation in time.

It added: ‘Food and drink manufactures have played an indispensable part in feeding the nation during the Covid-19 crisis.

‘The advertising and media industries, for their part, have played an instrumental role in supporting Government communications by sharing vital public health messaging with the public over the course of the pandemic.

‘We are also working intensively to minimise the inevitable disruption due to the end of the EU transition period and the introduction of new trading provisions from the Northern Ireland protocol.

‘Both of these by themselves are very significant undertakings and are both made more perilous by the current operational and financial impacts of the pandemic. 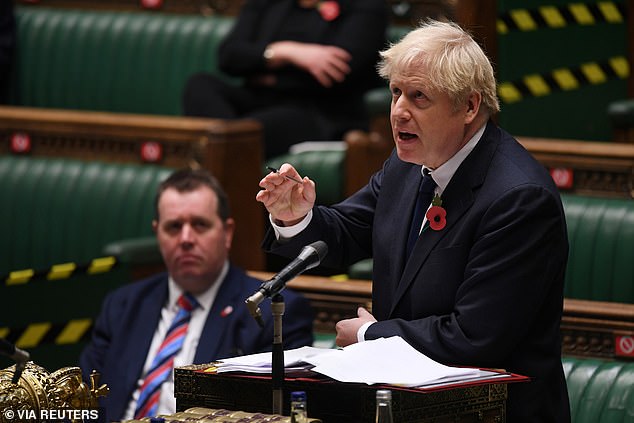 ‘The sheer volume of critical work facing food companies in the next few weeks means that at this time we simply cannot give this consultation the resource it deserves and demands. Something will have to give.’

The letter called for an extension to the closing date of the consultation and a meeting with Mr Johnson and the Number 10 health policy team.

It comes just weeks after Tory MPs criticised the Government’s ‘nanny state’ plan to ban online junk food adverts and said the proposals were ‘incoherent’ because they came after ministers encouraged people to eat fast food through the Eat Out to Help Out scheme.

The proposals were also slammed by the Institute of Economic Affairs think tank, with head of lifestyle economics Christopher Snowdon warning the ban would impact ‘a huge range of perfectly normal food and drink products’.

‘It will cover everything from jam and yoghurt to Cornish pasties and mustard, and will include all forms of online advertising, including paid-for search engine listings, emails and even text messages – at any time day or night,’ he said.

‘No country in the world has attempted anything like this and with good reason.

‘It will permanently exclude businesses large and small from the primary marketing medium of our time.

‘It is an ill-considered policy designed by fanatics who have mis-sold it to politicians as a ban on “junk food” advertising.

‘It will be hugely damaging to food producers, especially small businesses and start up companies, and will have no impact on obesity.’