Sir Keir Starmer will tell Labour members that the party must rediscover its patriotism and ‘pride in Britain’ this week as he seeks to draw a line under the Jeremy Corbyn era.

The Opposition Leader will use an online address to the virtual conference, which starts today, to warn that the party must do more to engage with traditional voters who were alienated by his hard Left predecessor.

The party has already unveiled a new slogan ‘A new leadership’ which also tries to distance Sir Keir from the Cobyn movement, which led the party to one of its largest ever election defeats in December.

A source told the Telegraph: ‘This week Keir will speak explicitly of his pride in Britain, of its values and for what it has achieved. It’ll be patriotic , optimistic and rooted in people’s values.’

‘So, recognising that, listening to those who no longer vote Labour – and I spent the last six months listening, asking for conversations with people to be difficult rather than easy – and changing and focusing on the future, and that means difficult decisions like tackling anti-Semitism. So, a new leadership, focused on 2024 but absolutely recognising the scale of the task that we face.’ 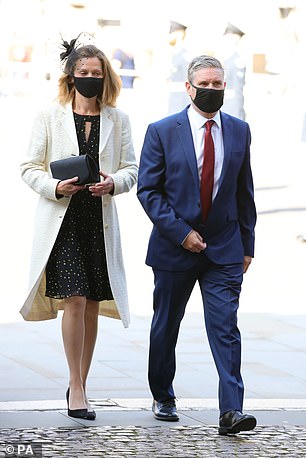 The Opposition Leader told Sky’s Ridge on Sunday today (left): ‘We are making it clear we’re a new leadership and that means absolutely clear about recognising the scale of the defeat last December. He later attended a service for the 80th anniversary of the Battle of Britain (right) with his wife Victoria 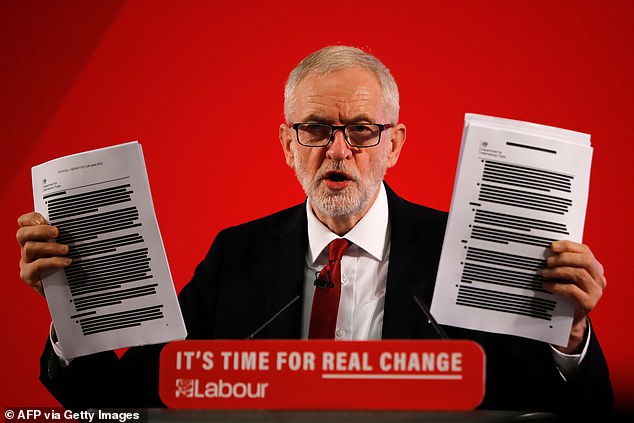 The Opposition leader will use an online address to the virtual conference, which starts today, to warn that the party must do more to engage with traditional voters who were alienated by his hard Left predecessor 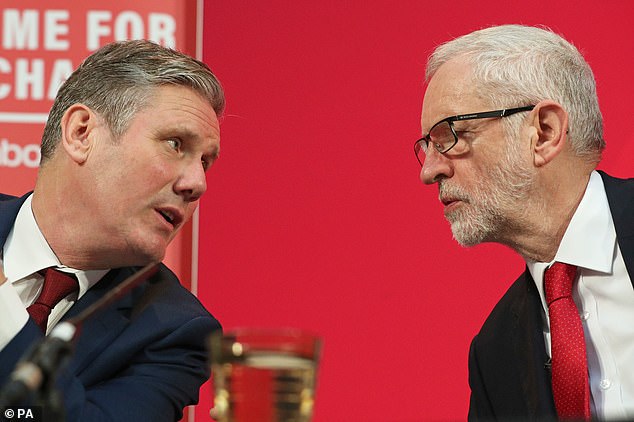 The party has already unveiled a new slogan ‘A new leadership’ which also tries to distance Sir Keir from the Cobyn movement, which led the party to one of its largest ever election defeats in December

Sir Keir admitted he sometimes finds it tough being a vegetarian because of his love for bacon sandwiches.

The Labour leader confirmed today that he had been given up meat years ago for health an environmental reasons, but that it was not plain sailing.

He told Ridge: ‘ I gave up as a matter of principle years ago on the basis that eating meat wasn’t the right thing for the body and the planet but I have to say, I miss meat.’

Asked what he specifically missed he looked whistful as he added: ‘Oh, bacon sandwiches, chicken curry, you name it, almost everything!

‘So, this is hard work for me but my wife has been vegetarian for many years longer than I have so … ‘

Mr Corbyn was widely criticised as leaders for failing to criticise Russia after it was foudn to have been behind the novichok nerve agent attack in Salisbury.

The attempted assassination of Sergei and Yulia Skripal left a local woman dead.

The former leader is a long-standing senior member of the Stop the War Coalition, which campaigns against western military intervention, and wants the UK to abandon its nuclear deterrent.

In June It was revealed that documents used by Mr Corbyn in his election campaign was ‘almost certainly’ spread by ‘Russian actors’ in the run-up to the December poll.

The then-Labour leader brandished a 451-page dossier at press conferences saying they proved the NHS was ‘for sale’ in a post-Brexit trade deal.

Sir Keir is expected to use his keynote speech on Tuesday to set out his vision for Britain after Covid-19 and to explain how he intends to lead Labour back to power.

Sir Keir, formerly a leader of Labour Remainers, told Ridge today: ‘We have left the EU, we’re out, so the Leave/Remain argument is over.

‘Whichever position people held in the past; we have left so Leave/Remain is over.

‘On the second question, do I want to win? Of course, I want to win, I absolutely want to win. We have lost four elections in a row; I didn’t come into politics to be in opposition.’

In a stinging rebuke to Mr Corbyn he also said: ‘Leadership was necessary on anti-Semitism and that’s what we’re showing in the Labour Party now.’

‘What I’ve tried to do as leader of the Labour Party is make it very clear in my acceptance speech (in becoming leader) that we would tear out anti-Semitism and then get on and do it, and make sure that we’re taking action as well as words.

‘In all my discussions with Jewish communities they’ve said to me, ‘Keir, in the end we’ll judge you on what you do, not what you say’, and I’m happy with that.’

Last night Sir Keir’s bid to reaffirm his control over his party was met with claims from the hard-Left that he could betray Mr Corbyn’s legacy.

But Labour Party officials hit back by condemning Mr Corbyn for holding high-profile events at this week’s ‘virtual’ party conference.

The conference – relegated to an online virtual rally owing to Covid-19 – begins today with the party unveiling the slogan ‘A New Leadership’.

The phrase replaces ‘Under New Management’ which Sir Keir, who replaced Mr Corbyn in May, has been using during the summer.

But at an online rally for the Socialist Campaign Group on Monday, party figures loyal to the Left-wing agenda charted by the former leader will warn Sir Keir not to ‘lurch to the Right’ by burying Mr Corbyn’s policy platform.

Former Shadow Cabinet Office Minister Jon Trickett is set to use the event to launch a thinly veiled rebuke of the new leader for failing to set out a vision that will take Labour back to power.

In an article to coincide with the rally, he will warn: ‘We can’t cross our fingers and expect to win the next Election by default.’

He will acknowledge Sir Keir’s success in holding Boris Johnson to account over the Covid crisis but will add: ‘It’s not enough to chip away at Boris’s blundering and the Tories’ incompetence. We have to make people feel they’re voting for something – not just against something.

‘It would be folly to ditch all the policy platform built up over the last five years. Build on it, yes! But don’t jettison the core principles.’

Insisting Mr Corbyn’s policies were popular with both the party membership and the electorate, Mr Trickett writes: ‘The last thing we need in the age of Covid, when even the Tories see the sense of massive state intervention, is for Labour to lurch to the Right.’

Sources loyal to Sir Keir hit back last night by pointing out that only this weekend a YouGov poll showed Labour had now drawn level with the Tories on 40 per cent each.

One said: ‘It’s pretty ridiculous for the hard-Left to start whingeing about Keir, given how much progress he’s made in restoring the party’s reputation since our disastrous Election result under Corbyn.’

One said: ‘At the same time Labour women’s conference hears from black female MPs and members, Jeremy Corbyn is hosting a rival event that matters most to him – his ego.’

But last night, allies of the former leader insisted he had every right to take part in conference meetings and branded the criticisms ‘absurd’.