Labour leader Keir Starmer tore into Dominic Raab over coronavirus testing and PPE blunders today as they faced off at the first ‘virtual’ PMQs.

Standing in for Boris Johnson in the Commons, the Foreign Secretary defended the painful progress towards the target of 100,000 tests a day by the end of the month.

But after Sir Keir Starmer pointed out that the number of checks being carried out daily is still less than half the potential capacity of 40,000, he acknowledged that many of those eligible had ‘transport problems’ about getting to testing centres.

Mr Raab said ‘mobile labs’ and the army were being deployed to try to get the numbers up, and dismissed warnings that the government is doomed to miss the goal, saying there could be an ‘exponential’ increase before the self-imposed deadline.

Sir Keir also hit out at bungling over life-threatening shortages of PPE for the health service and care workers, complaining that a swathe of companies had offered to help government with supplies and been ignored.

In another day of coronavirus turmoil: 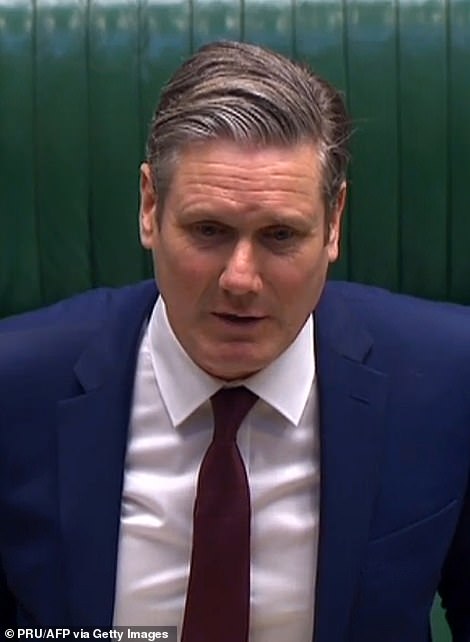 Standing in for Boris Johnson in the Commons, Foreign Secretary Dominic Raab (left) defended the painful progress towards the target of 100,000 tests a day by the end of the month. Sir Keir Starmer (right) also hit out at bungling over life-threatening shortages of PPE

Care Minister Helen Whately was savaged during a series of brutal interviews this morning as she struggled to provide answers to key questions on the supply of PPE, deaths of frontline workers and testing errors.

Ms Whately suffered four car crash grillings after she was sent out to bat for the government by Downing Street.

She was hammered by ITV Good Morning Britain host Piers Morgan for failing to know how many health staff have died from coronavirus.

It was the second interview between the pair in less than a week with Ms Whately’s previous appearance seeing her criticised for laughing after Mr Morgan confronted her over the number of people dying in care homes during the current crisis.

She was forced to defend the government’s record on the supply of vital PPE for the NHS amid fears shortages are putting the lives of frontline workers at risk.

She insisted ministers are moving as quickly as possible to boost supply as she spelled out the challenge of finding the ‘billions’ of items needed.

The Tory frontbencher was unable to explain why current testing numbers are so far below the available capacity.

The bitter clashes came amid increasing questions about the government’s approach to testing – which many believe is the only way out of the lockdown crippling the economy.

Health Secretary Matt Hancock announced yesterday that the number of drive-through sites will be increased from 26 to 50.

Meanwhile, ministers have been implementing proposals to send swabs direct to care homes, with ‘mobile delivery’ methods for the checks also being looked at.

Mr Hancock told the Commons – where a limited numbers are physically attending while others use video conferencing – this afternoon that testing demand had been ‘lower than  expected’.

‘I’ve set the goal of 100,000 tests a day by the end of this month and I’m delighted to say that the expansion of capacity is ahead of plans, even though demand has, thus far, been lower than expected,’ he said.

‘We are therefore ramping up the availability of this testing and expanding who is eligible for testing, and making it easier to access the tests.’

Mr Hancock said ‘contact tracing’ of those testing positive will be reintroduced when the number of cases falls, but that could take a few weeks.

At PMQ earlier, Sir Keir said the UK has been ‘very slow’ on testing.

He added: ‘The Health Secretary made a very important commitment to 100,000 tests a day by the end of April, but yesterday the figure for actual tests was 18,000 a day and that was down from Monday, which was 19,000 tests a day.

‘We’re way behind the curve and the end of the month is a week tomorrow. So, what does the First Secretary expect to happen in the next eight days to get us from 18,000 tests a day to 100,000 tests a day?’

Mr Raab said testing capacity was now up to 40,000 a day and will increase ‘exponentially’ by the end of the month

He added: ‘I do have to just correct him. Our capacity for tests is now at 40,000 per day, so I think that is an incredibly important milestone.

‘Of course, he is right to say that in the final week that will require a big increase.

‘But, of course, with a project like this, it does require an exponential increase in the final days and the final week of the programme.’

Sir Keir pointed out that frontline workers who have symptoms of coronavirus, or a family member displaying signs, must self-isolate.

He added: ‘To get a necessary test, they are then instructed to travel to a testing centre, which is often very many miles away. 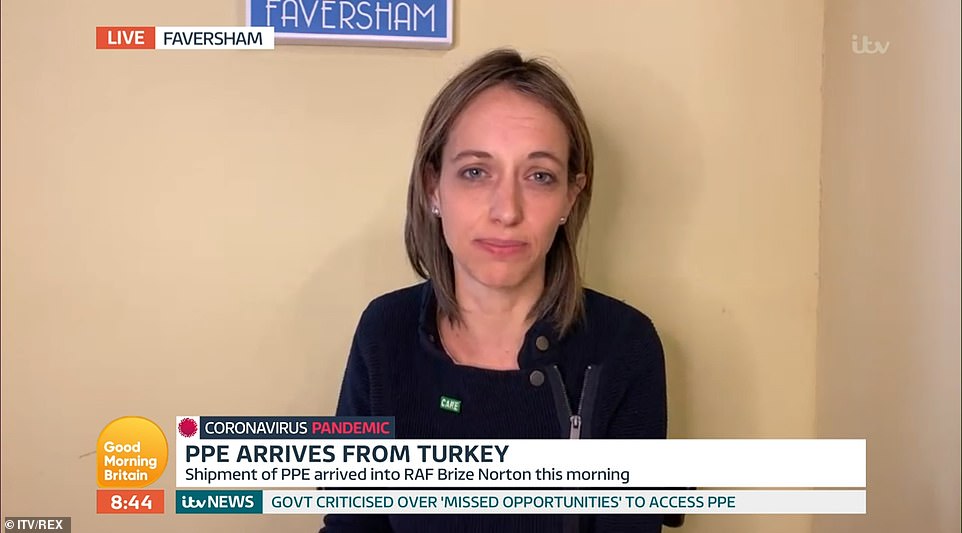 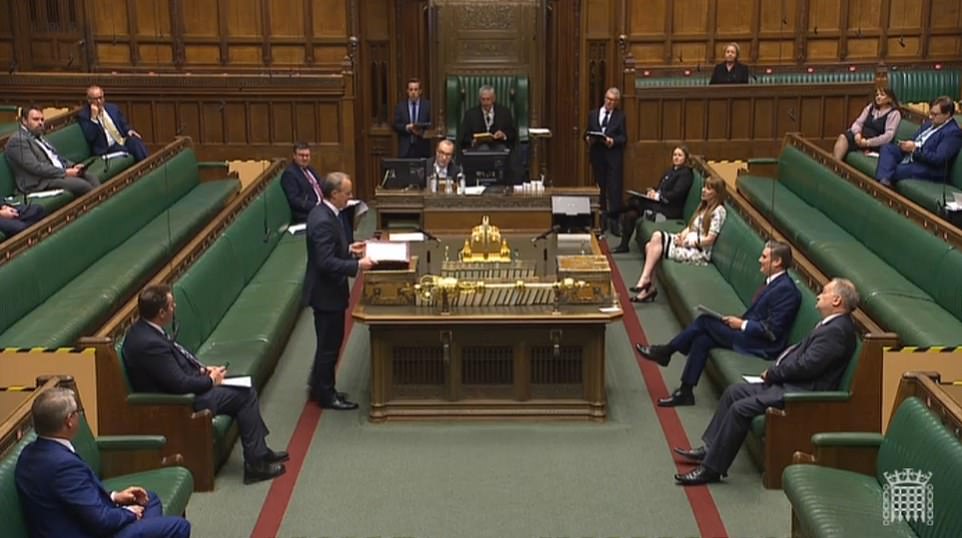 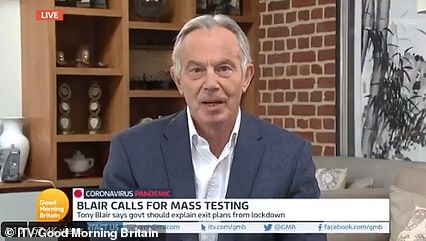 Tony Blair today insisted decisions on how to ease the coronavirus lockdown must be taken now – warning ministers cannot allow a ‘void’ while Boris Johnson recovers from the disease.

The former PM said the government had been ‘behind the curve’, underlining his demand for mass testing and a fundamental reorganisation of Whitehall, with experts being pulled in from business to help a war-style response.

He also raised concerns over the government’s insistence that an ‘exit strategy’ cannot be laid out now. Mr Blair said Foreign Secretary Dominic Raab and senior ministers must make crucial choices on releasing schools, regions and sectors to avoid huge damage to the economy.

Mr Blair waded into the row amid signs of Cabinet divisions over when and how to loosen the draconian social distancing curbs threatening to wipe a third off GDP and destroy millions of jobs.

‘Now there’s an obvious problem with that system. Not all care workers will have access to a car, because they’ve got symptoms or family members have got symptoms they obviously can’t use public transport, so it is little wonder we’re seeing these pictures of half-empty testing centres.’

Mr Raab said: ‘It is about demand. We need to encourage those who are able to take the test to come forward.

‘But he is right to say that it is also about distribution, and some of the logistical and frankly transport problems that people particularly some of those that he described will have in terms of getting to the tests.

‘So we are working with the local resilience forums to make sure we can distribute the tests as effectively as possible.

‘We have got mobile labs to go to some of those areas that are hard to reach. We will be using the army, who have made along with the other key workers an incredible contribution.’

Sir Keir also raised ‘countless’ problems with supplies of PPE for frontline workers, saying ‘the least they deserve is the right protective equipment’.

Labour has been contacted by 36 British companies that say they have offered to help the government sourcing kit, but been ignored.

‘This has been a stress test of our resilience and the Government plan is clearly not working,’ he said.

‘There’s a pattern emerging here – we were slow into lockdown, slow on testing, slow on protective equipment and now slow to take up these offers from British firms.

Mr Raab responded: ‘He will know that getting the PPE to where it needs to be is a massive international challenge that every country faces globally from China to Germany, and we have done a huge effort to provide, for example, the ventilators which have bolstered the NHS through this incredibly difficult time.

‘Since the start of the outbreak, we’ve delivered one billion items of personal protective equipment and tens of millions have been distributed via the devolved administrations.’

Earlier, care minister Helen Whately was unable to explain why current testing numbers are so far below the available capacity.

Pressed repeatedly on the issue on ITV’s GMB, Ms Whately said: ‘We know that testing is really important and so we have been working hard to ramp up the testing capacity in the country.’

Presenter Piers Morgan interrupted and said test numbers had actually fallen in recent days, adding: ‘I don’t want to hear about your ramping up. Care Minister, with respect, you are not ramping it up… you are going backwards. Do you see?’

Ms Whately then said the UK had ‘trebled’ the number of tests which can be done prompting Mr Morgan to exclaim: ‘You are not doing them! You are doing 18,000 a day which is less than you were doing 12 days ago.’

The Care Minister then asked Mr Morgan to ‘let met me finish speaking’ but the exasperated TV presenter said: ‘You keep talking about capacity. I am asking you about how many you have done.’

Boris Johnson’s stand-in Dominic Raab and Labour leader Keir Starmer were among the few MPs in the chamber for Prime Minister’s Questions’ this afternoon as the hybrid legislature met for the first time.

With just 50 MPs allowed on the famous green benches the vast majority of parliamentarians who would usually provide a cacophonous background to proceedings mainly followed and asked questions from home.

But the session was not without technical problems. David Mundell, the Tory former Scottish Secretary, was due to ask a question but Speaker Lindsay Hoyle informed MPs ‘we have been unable to connect’ to his home in his Dumfriesshire, Clydesdale and Tweeddale seat. 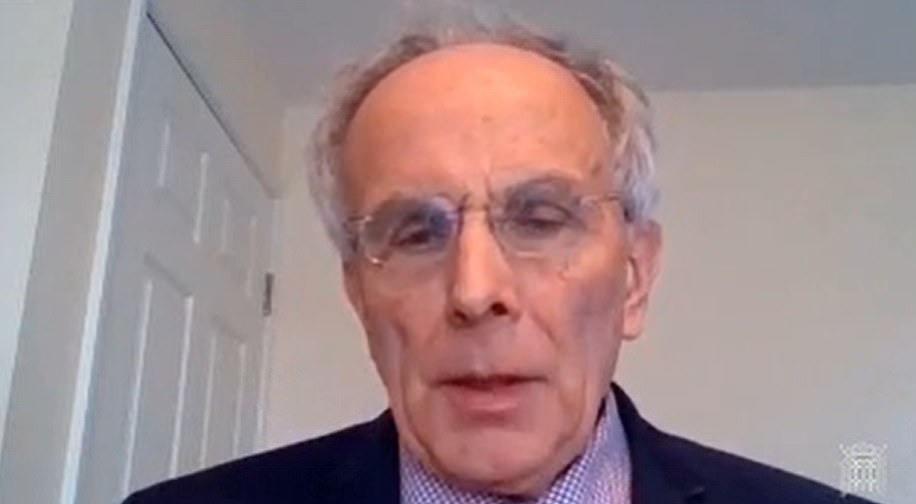 Peter Bone was later cut off as he finished asking a question about the behaviour of the banks, with Mr Raab smiling and saying he had got ‘the gist’ of the question

David Mundell, the Tory former Scottish Secretary, was due to ask a question but Speaker Lindsay Hoyle informed MPs ‘we have been unable to connect’ to his home in his Dumfriesshire, Clydesdale and Tweeddale seat 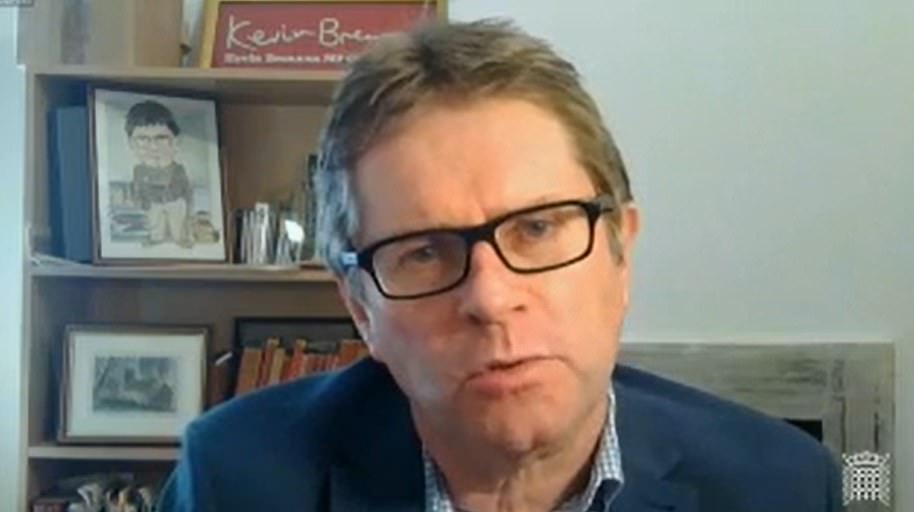 Peter Bone was later cut off as he finished asking a question about the behaviour of the banks, with Mr Raab smiling and saying he had got ‘the gist’ of the question.

Much of his question broadcast in the chamber from his Cardiff West constituency was inaudible, which prompted some laughter.

Speaker Sir Lindsay said: ‘I hope the Secretary of State can make the most of that question, the line did go down.’

Mr Hart said he got the ‘general gist’ of the question about the coronavirus.