Sir Keir has told Labour MPs to vote for the accord when it is crashed through Parliament tomorrow on the grounds that it is better than a damaging no deal split from the EU which is the only alternative.

But Labour MPs, councillors and activists are increasingly angry at the leader’s decision and are demanding that he perform a U-turn.

The statement calls on all opposition parties not to support the agreement and warns Labour against ‘falling into the trap’ of backing it.

The growing Labour rebellion came as Tory Brexiteers were poised to announce their backing for the deal. 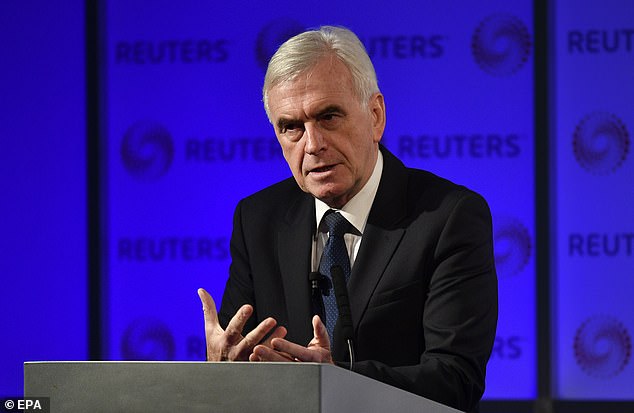 But Sir Keir is facing a growing Labour rebellion on the issue, with ex-shadow chancellor John McDonnell leading calls for the party not to support the ‘rotten’ accord

Sir Keir is calling on Labour MPs to support the ‘thin’ post-Brexit free trade agreement, despite misgivings that it will fail to protect many key economic sectors.

He argued, however, that the alternative of ending the Brexit transition period on December 31 without a deal in place would be even worse for the economy.

His stance has upset some pro-Europeans in the party who say they should not support a flawed agreement and should abstain instead.

The statement has been organised by the campaign groups Another Europe is Possible and Labour for a Socialist Europe – both on the left – but it has attracted support from both wings of the party.

As well as Mr Bradshaw, the signatories also included ex-cabinet minister Lord Adonis from the Blairite wing of the party.

From the left, Mr McDonnell is joined by Mr Lewis as well as a number of former MEPs, councillors and party activists.

The statement said: ‘Given the Government’s majority, it is a foregone conclusion that the deal will pass in parliament, but this deal will not “get Brexit done”: negotiations over trade and regulatory frameworks will go on and on for years to come.

‘The vital task now is opposition: proper parliamentary scrutiny of this and all future trade deals, and the setting out of an alternative future in which we not only regain the rights and jobs we have lost, but become a better and more equal society.

‘That task gets harder if opposition parties fall into the trap of rallying around this rotten deal.

‘We call on Labour, the labour movement and other opposition parties not to support the Tories’ Brexit deal when it is put to a vote in the House of Commons.’

Labour is alone among the opposition parties in saying it will support the deal – with the SNP and the Liberal Democrats having said they will vote against it.

Yesterday it was reported that half a dozen Labour frontbenchers could quit over the instruction to support the deal.

The DUP – which backed Brexit – has also said it will oppose the deal because the Brexit divorce settlement imposes customs checks between Northern Ireland and the rest of the UK.

The growing Labour rebellion came as Tory Brexiteers prepared to deliver their formal verdict on the PM’s trade accord.

The European Research Group of Tory MPs has been reserving judgement on the deal until its ‘star chamber’ of legal experts led by Sir Bill Cash has pored over the detail.

The group is expected to set out its position this afternoon with all signals suggesting it will support the deal despite some misgivings over elements of the agreement.

Mr Johnson will crash his trade deal through Parliament in a single day tomorrow, with one day to spare before the end of the ‘standstill’ transition period on December 31.

The PM’s 80-seat majority and the backing of a majority of Labour MPs means the accord’s passage through the House of Commons and the Lords should be relatively smooth sailing.