Members of the armed forces will be drafted in to help give Covid tests to thousands of school and college students in England.

The Ministry of Defence said 1,500 military personnel would be deployed to ensure that testing systems were up and running by the time pupils returned for the new term in January.

It comes as ministers were warned that keeping schools shut in January will harm children’s prospects.

Next term is already being postponed by a week for most secondary pupils to allow for coronavirus testing.

But teaching unions and scientific advisers are seeking at least an extra fortnight’s delay in the face of a surge in infections.

But the MoD will now draft in the personnel to form local response teams, providing support and phone advice to institutions needing guidance on the testing process and set-up of the testing facilities.

According to the department, support will be done ‘predominantly through webinars and individual meetings’, but teams would also be on standby to provide in-person support at short notice.

Students will swab themselves in the vast majority of cases, under the supervision of a school staff member or volunteer who has been trained for the role, and teachers are not expected to take a role in the testing process.

The MoD added that schools and colleges would shortly be provided with further information on how to request additional support if necessary.

The decision follows successful testing pilots conducted in schools in November and December and the work is being done in conjunction with the Department for Education (DfE) and Department of Health and Social Care (DHSC). 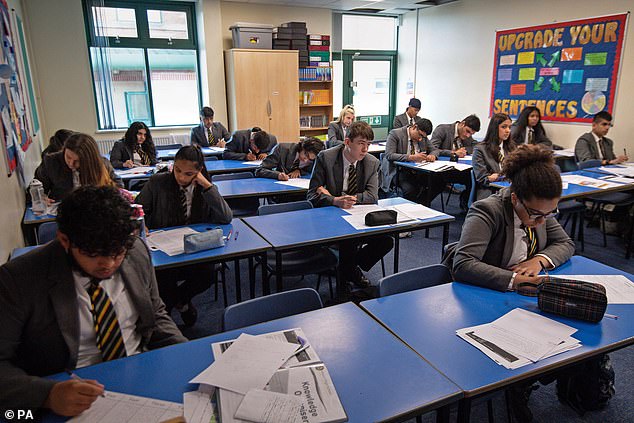 Students will swab themselves in the vast majority of cases, under the supervision of a school staff member or volunteer

Defence Secretary Ben Wallace said: ‘The UK armed forces are stepping up once again this holiday.

‘They’ll share considerable experience of testing across the country and the successful school pilots conducted this autumn.

‘We are grateful for the professionalism and commitment they and our colleagues in teaching are showing to get students back into the classroom and on with their education.’

The armed forces were previously recruited to assist with pilot mass testing schemes in Liverpool in November.

Education Secretary Gavin Williamson said: ‘It is a true cross-government effort to make sure secondary schools and colleges have the support, guidance, materials and funding they need to offer rapid testing to their staff and students from the start of term.

‘I am grateful to the armed forces personnel, and all the school and college staff, leaders and volunteers working to put testing in place.

‘This will help break chains of transmission, fight the virus, and help deliver the national priority of keeping education open for all.’ 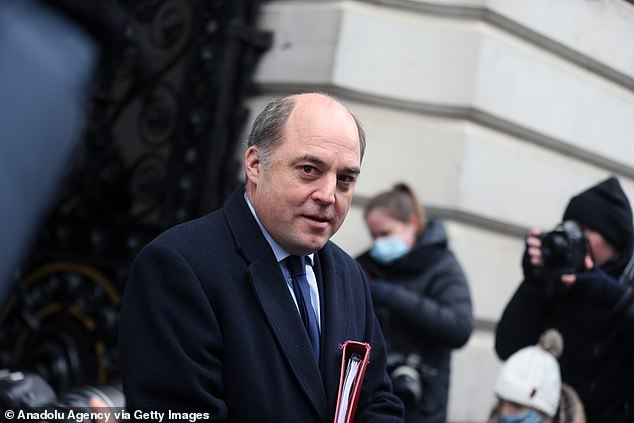 Defence Secretary Ben Wallace said: ‘The UK armed forces are stepping up once again this holiday’

He is said to be keen to stick to the existing schedule while others in the Government are concerned by signs that a new strain of the virus spreads faster among the young.

At the meeting yesterday No 10 is believed to have told Mr Williamson to bolster the plans for testing at secondary schools. Some headmasters have complained they lack the resources to swab all their pupils.

Health Secretary Matt Hancock and Cabinet Office minister Michael Gove are said to be leaning toward delays to next term – with Mr Johnson keen not to pursue this course.

Schools were closed in March to all pupils apart from the children of key workers, and many did not return until September.

Any move to close them again would throw the fate of next summer’s exams into serious doubt. The testing initiative, which was announced on the last day of term, caused consternation among heads who now have to recruit extra staff. 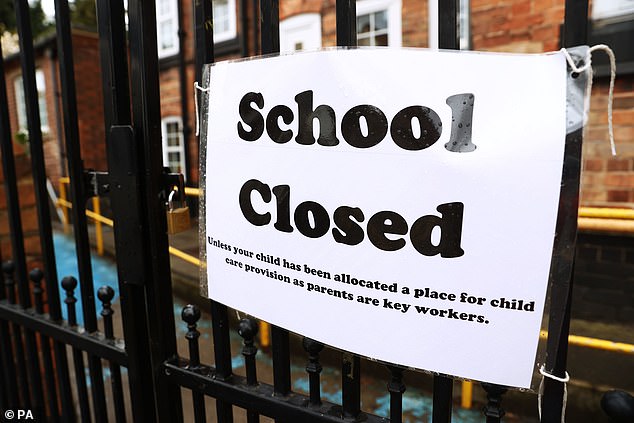 The National Education Union has protested about the lack of clarity and wants to see at least a further two-week delay to the new term to help suppress the virus.

Patrick Roach of the NASUWT teaching union wrote to Mr Williamson yesterday asking for schools to remain closed at the start of term and for the publication of the latest scientific advice on the new strain.

Labour education spokesman Kate Green criticised Mr Johnson for his silence. She added: ‘The country needs to hear from him today, alongside the chief medical officer and chief scientific adviser, about the evidence on the spread of the virus, how he plans to minimise disruption to education and a clear strategy for schools and colleges that commands the support of parents, pupils and staff.’

The Sage scientific advisory group has reportedly been pushing for tougher lockdown restrictions to fight the new strain, arguing that the R rate will not fall below 1 without schools shutting. The scientists believe that secondary school closures would make more of an impact than shutting primaries because older children are more likely to be infected with Covid-19. 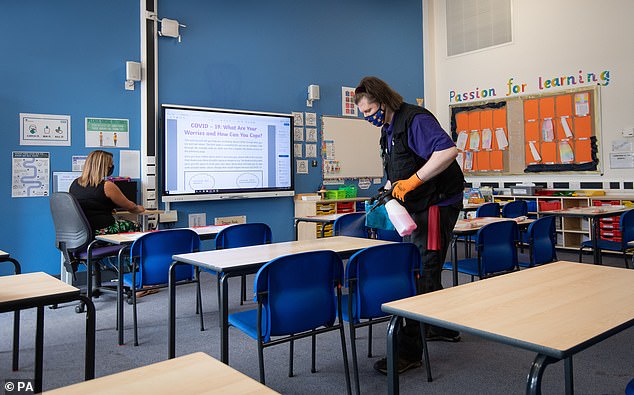 But Molly Kingsley, of parents’ campaign group Us For Them, said: ‘It is sad that schooling is even up for debate. We are setting ourselves up for a perpetual cycle of on-off schooling. The Government needs to set a marker that education transcends these things.’

Lee Elliot Major, professor of social mobility at the University of Exeter, said: ‘Closing schools is the worst thing we can do for the future life prospects of pupils, particularly the poorest children.

‘Any decision to deny schooling for pupils must not underestimate the long-term scarring effects. Our research is revealing stark education and economic inequalities in the wake of the pandemic and these are likely to have dire consequences for future social mobility.’

Education watchdog Ofsted said in its annual report that remote learning was ‘not a substitute for in-class learning’. Adam Finn, a University of Bristol paediatrics professor, told Radio 4’s World at One: ‘Keeping some kind of education going must be a priority for all of us, not only for the education and social development of kids, but actually in some cases for their safety and nutrition.’ 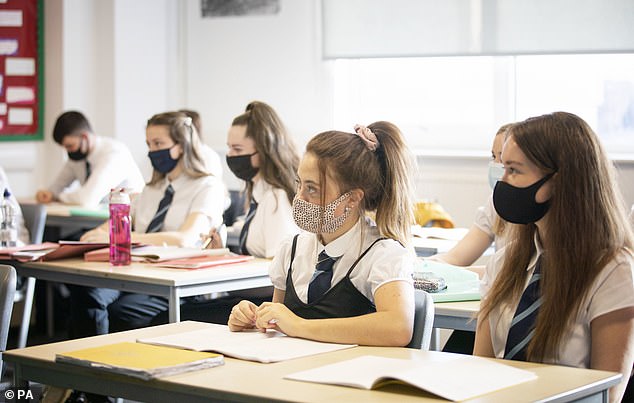 Chris McGovern, chairman of the Campaign for Real Education, said: ‘Millions of children are being damaged both in terms of their mental health and academic achievement. We can’t deprive children further.

‘I have sympathy for the profession and a great deal of admiration for teachers but perhaps the answer is to let parents make the decision whether to send their child to school.’

Mr Gove said yesterday that ministers would speak to headmasters over the next 48 hours to ensure the testing plans were ‘robust’. But he also told Sky News: ‘We always keep things under review.’

A government spokesman said: ‘We want all pupils to return in January as school is the best place for their development and mental health but it is right that we follow the path of the pandemic and keep our approach under constant review. Our huge expansion of rapid testing will support secondary schools and colleges to stay open to all pupils and reduce the risk of transmission.’

Q&A: Why closures are so ruinous

Is the new mutation really more infectious in children?

Controversial epidemiologist Neil Ferguson told MPs last week there was a ‘statistically significant increased proportion of cases’ among under-15s, citing anecdotal evidence of classroom infection rates accelerating. But, as the Imperial College London professor acknowledged, scientists still do not know enough to be sure. Keeping schools open was always a calculated risk, with ministers balancing any R rate rise with protecting children’s futures.

Closures are universally agreed to have a deleterious impact on children, with the poorest suffering the most as they ‘tend to have fewer educational opportunities beyond school’, Unesco says. Ofsted has detailed children going backwards in basic skills such as reading and writing, as well as an increase in emotional problems, eating disorders and self harm.

Chief Inspector Amanda Spielman said many children could already be ‘at least six months behind where they should be’.

The Government will have to hope its mass handout of laptops to poorer families, as well as the extensive work that schools have put into improving remote education provision, will mean that any potential closures will be less of an educational disaster than the earlier ones.

What is the risk to teachers?

Preliminary research by the London School of Hygiene and Tropical Medicine says the new strain of the virus is spreading 56 per cent more quickly than the initial variant, while other estimates suggested it could be up to 70 per cent. There is no evidence it is more dangerous to health, but suggestions that it can spread more quickly and infect children more easily have left teachers worried.

Will teachers be prioritised for vaccinations?

Teachers are not on the priority list but this could change, especially if approval of the Oxford/AstraZeneca jab dramatically speeds up the programme. The Joint Committee on Vaccination and Immunisation lists teachers alongside other professions such as those working in the military, justice and transport systems as being in the second phase.

Will tests at schools work?

The Government and education leaders agree that regular testing in schools would help to protect teachers and limit outbreaks among children.

Daily testing of those who come into contact with a case will also mean they do not have to isolate at home unless they too test positive.

But Education Secretary Gavin Williamson appears to have burnt through teachers’ goodwill with his last-minute plan to test secondary school pupils.

In theory, all should have been tested by the end of next week, despite schools receiving instructions two days before Christmas – and the first batches of tests being delivered next Monday.