Katy Perry has revealed the trick to making her packed schedule work – no boyfriends.

Juggling a packed tour schedule along with filming commitments for American Idol, something had to give.

And for Katy Perry, single following her break-up with Orlando Bloom, her love life was the obvious choice.

‘I’m single!’ Katy Perry reveals her key to making American Idol work with her tour schedule… no boyfriends; she is seen at a fashion event in August

‘I’m a bit younger in heart! I’m a bit more mature…single!’ a laughing Katy told Entertainment Tonight, when asked about how she copes.

‘You know, when you’re single, you got a lot of time to yourself and a lot of energy, and I’m just finding a delicate balance.’

The 32-year-old was married to comedian Russell Brand from 2010 until 2012 and has also dated the likes of John Mayer and Orlando Bloom.

She said her fellow Idol judges Lionel Richie and Luke Bryan were doing a lot of the work.

‘These guys are pulling a lot of the weight,’ said Katy. 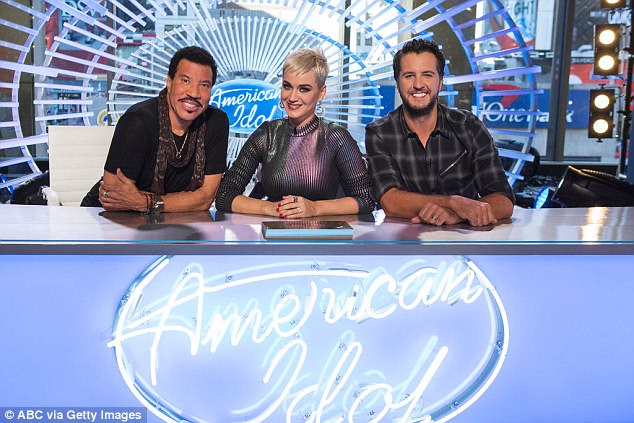 The new Idol panel: Katy said her fellow Idol judges Lionel Richie and Luke Bryan were doing a lot of the work

Katy is currently racking up the air miles with her Witness Tour, playing to sell-out arena crowds.

But having been paid $25million for her Idol gig, she needs to give producers their money’s worth.

By contrast, Charlie Puth recently revealed he turned down a role on American Idol because the schedule was ‘too overwhelming’.

The We Don’t Talk Anymore hitmaker admitted he was ‘honoured’ to be asked to be a judge on the talent show, but said he had to turn it down when ‘Iife got crazy’.

Charlie shared: ‘The schedule got too overwhelming. It’s nothing to do with [the network] … ABC is wonderful and I told them I would love to be in business with them in the future. [I was in talks] and then things in my life got crazy.

‘I can’t wait to watch it. It’s a huge honour that they asked me. The fact that they would even ask me to be a part of it is just beyond flattering because it’s a show I grew up watching and I know it’s going to be amazing without me.’