Katy Perry has made many wild impressions at the annual Met Gala event in New York City, but this year may be different.

The Roar singer told PageSix Style that she is looking to take a different turn for 2022 with perhaps a more elegant approach which would be in step with her current red carpet mood.

‘You know, it would be pretty obvious for me to go play the kooky, crazy, wild, big, fun, colorful card,’ the Santa Barbara native told the site. ‘This time, I’m going to play a whole different card.’

Her ‘quirky’ style can still be seen on stage but she has been wearing more ‘sophisticated and streamlined and sexy’ looks on the carpet, she said. She won’t completely change her stripes, however as she added: ‘I know what the people want, and I know where I came from. I always want to put a good show on. I take fashion risks all the time, but I never have any regrets.’

Here is a look at all of her Met Gala looks over the years.

Perry played it safe in a royal blue fitted satin dress by Tommy Hilfiger with a bronze halter strap that matched her large cuff Wonder Woman reminiscent bracelet. The look was made even more elegant with a Betty Boop bob hairstyle with bangs. The theme was The Model as Muse: Embodying Fashion.

The siren went for a feminine look with her pale pink strapless CuteCircuit gown that was lit up with 3,200 LED lights. A slit up her leg reminded fans she had an incredible figure. She added a pink and white diamond choker for a Marilyn Monroe Gentleman Prefer Blondes feel and finished with open-toe heels. The I Kissed A Girl diva wore her hair jet black with soft curls. The theme was American Woman: Fashioning a National Identity. 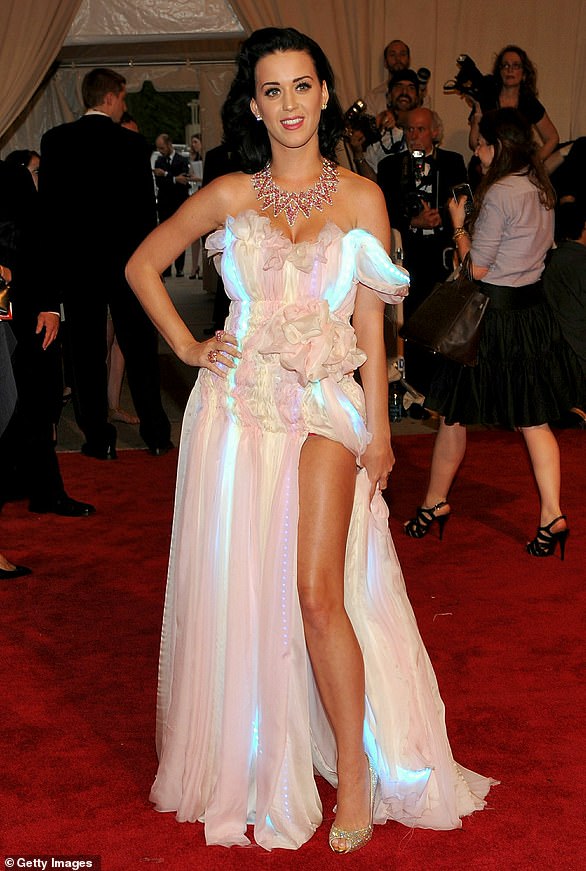 It was a Renaissance look this year for Perry who had on a dress with sleeves and a hem that went to her calf. The Dolce & Gabbana number had a portrait of a woman on the front with several beads all over in maroon, gold and green. A gold crown perched on her head added a royal feeling as she wore Mary Jane heels. Her earrings were massive gold and pearl crosses to drive home the throwback style. The theme for the year was Punk: Chaos To Couture. 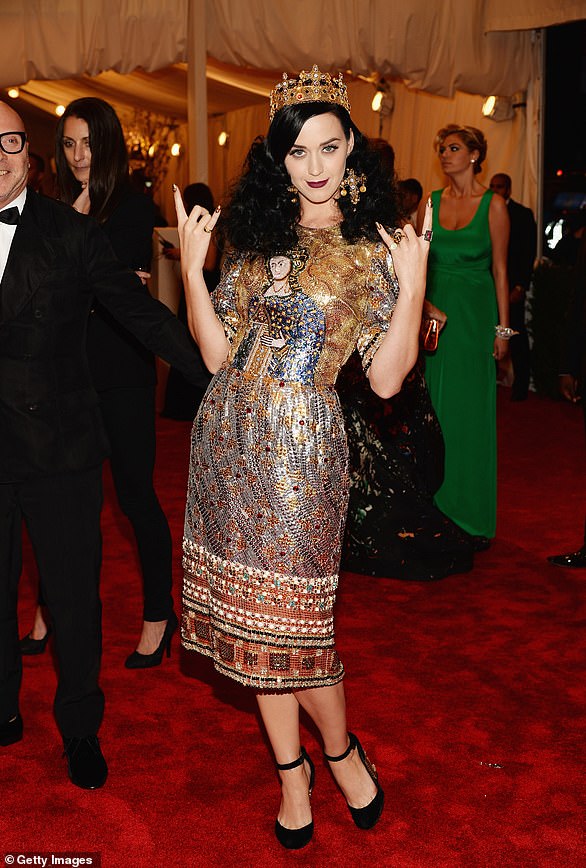 The crooner took a risk by modeling a plunging black sweetheart-neckline dress that was spray-painted on the bottom. Perry added black blue spray painted opera gloves and she carried a purse that was a can of spray paint to stay consistent with the graffiti vibe. The designer was Moschino. But the hair is what stood out the most: she wore her locks very short and jet black. The theme was China: Through the Looking Glass. 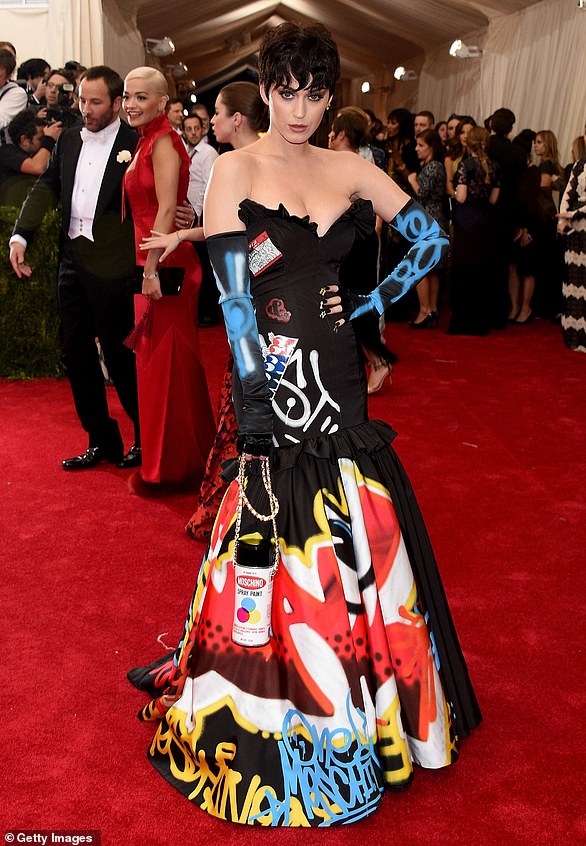 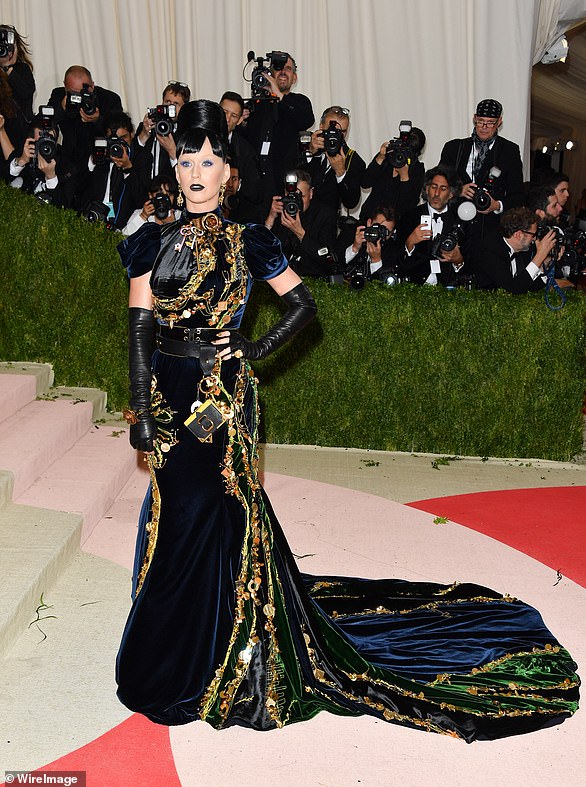 It was blood red for the Dark Horse hitmaker as she wore an embroidered sheer red veil designed by John Galliano over her head that covered her intense red Maison Margiela dress that had layers of bundled tulle everywhere. It was not easy to see her face with all that fuss. Red camel toe boots added some offbeat fun. The theme was Rei Kawakubo/Comme des Garcons: Art of the In-Between. 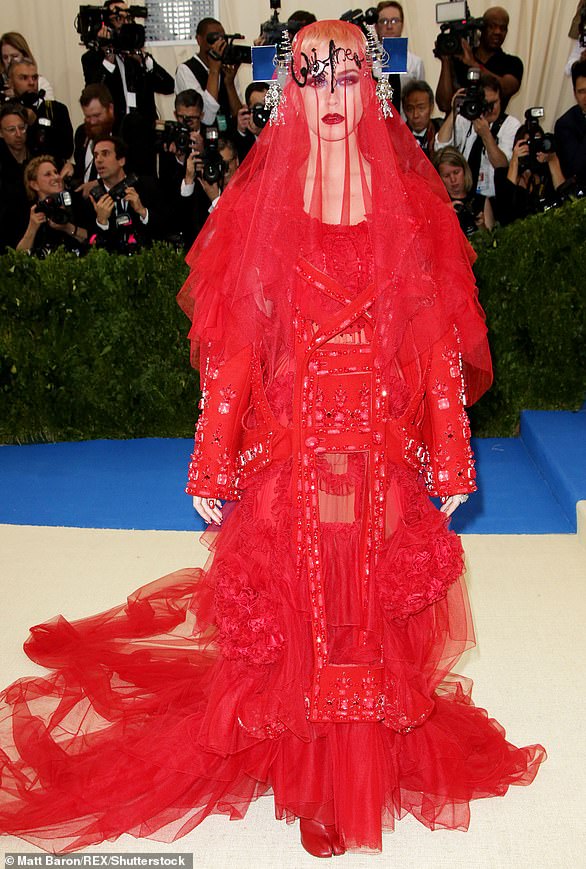 Perry got into the costume mood as she dresses up as an angel complete with 10 foot high off-white feathered wings that could not have been easy to maneuver on the red carpet. The siren had on a bright gold Versace mini dress with a sheer overlay and over-the-knee boots. Then theme was Heavenly Bodies: Fashion and the Catholic Imagination. 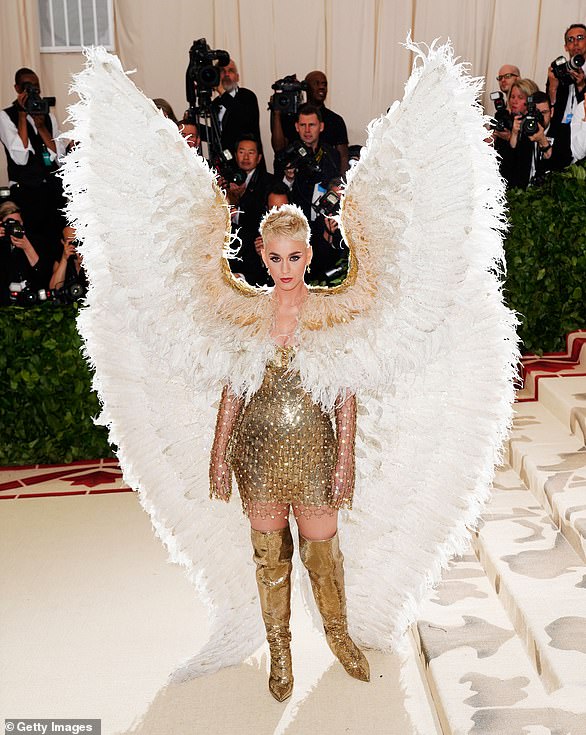 Katy wore a working chandelier on her head and around her waist with a sparkly dress by Moschino underneath and silver bow-tied Cinderella style high heels to resemble the character Lumiere – which translates from French as light – from Beauty And The Beast. The theme was Camp: Notes on Fashion. Inside the swanky party she went for silly laughs as she slipped into a cheeseburger costume by Moschino. 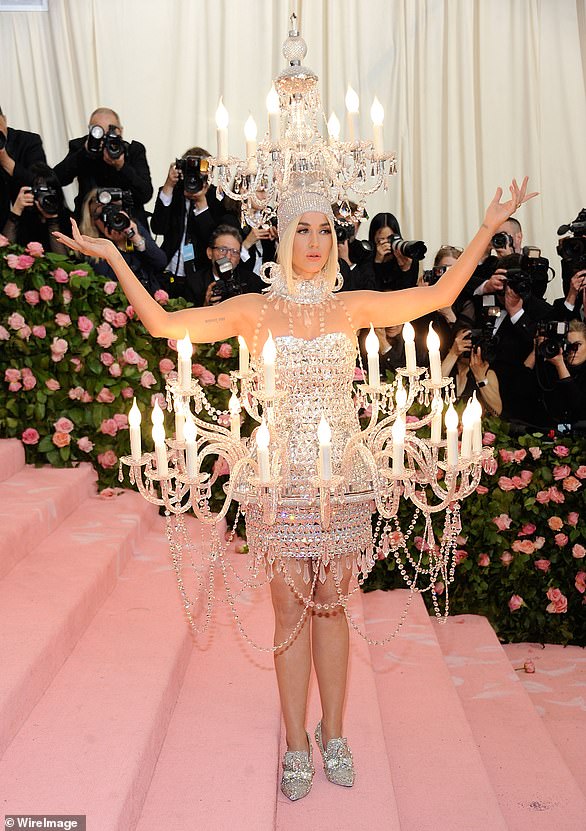 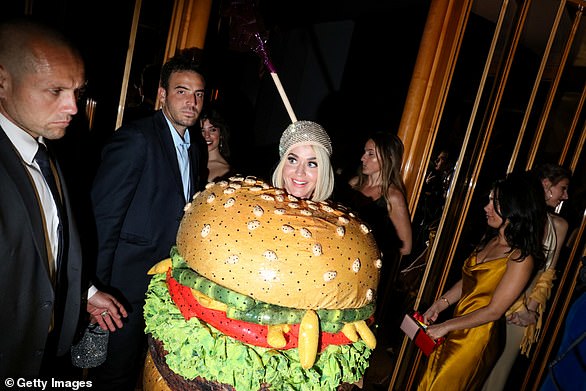