The hype around Katie Taylor against Amanda Serrano was summed up perfectly by Eddie Hearn, who is promoting the biggest fight in women’s history at Madison Square Garden this Saturday.

‘Taylor-Serrano is a moment in time,’ said the Matchroom Boxing chief. ‘Trust me when I say the amount of media that is coming to Madison Square Garden, I’ve never seen anything like it.

‘This fight, when it comes around on Saturday, will be absolutely massive. I think people have embraced this fight. People are excited for this moment. People have bought into this moment.’ 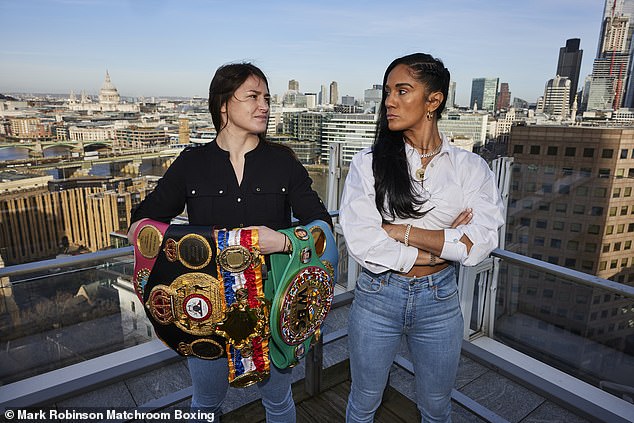 Arguably the two biggest stars in the women’s game, the two fighters put their immaculate records on the line on April 23 with all the lightweight belts on the line and a chance for Serrano to usurp Taylor as the undisputed champion.

Serrano comes into this showdown as the slight favourite as a seven-weight world champion having conquered the super fly, bantam, super-bantam, feather, super-feather, lightweight and super lightweight titles.

She is not someone to take lightly in the slightest, and Taylor faces her toughest test by some distance. Serrano’s profile has been raised massively in recent years, with the 33-year-old coming on leaps and bounds since her sole career defeat to Frida Wallberg in 2012.

Teaming up with YouTuber-turned fighter Jake Paul has been a boost too, and she now possesses a big following as a nine-time world champion with 42 career victories. The Puerto-rican, who is based in New York, tried her luck in wrestling and MMA and was born to fight – but it was boxing that was her true calling. 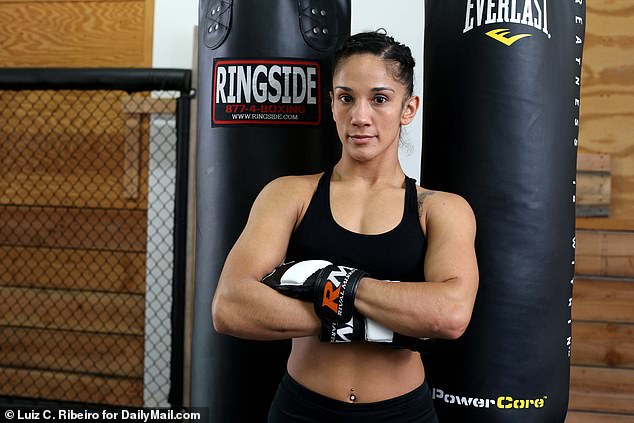 At the start of 2021 she revealed how fans wouldn’t know ‘who the heck I am’, but under the promotion of Paul’s company Most Valuable Promotions, she now has supporters gathering to take a picture with her at her hotels.

After tweeting Paul last April asking to be on one of his shows, she quickly appeared as a co-main event against Miriam Gutierrez on the undercard of Paul vs Tyrone Woodley II and then became the first athlete signed to MVP.

Paul said his main motivation was to get female boxers the recognition they deserve and level the playing field by upping their paydays.

‘First and foremost, I hope it just puts [women’s boxers] on a different pedestal of respect and gets them paid better,’ he said. 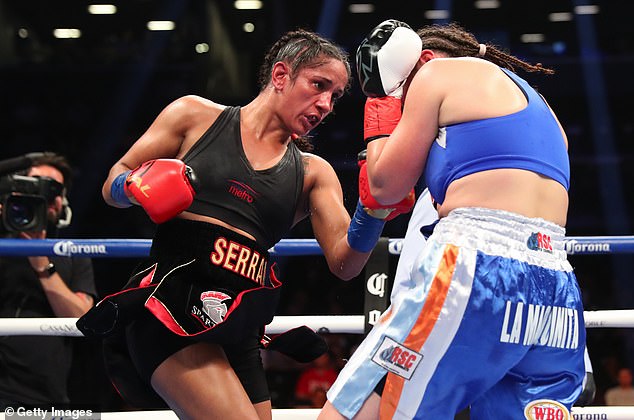 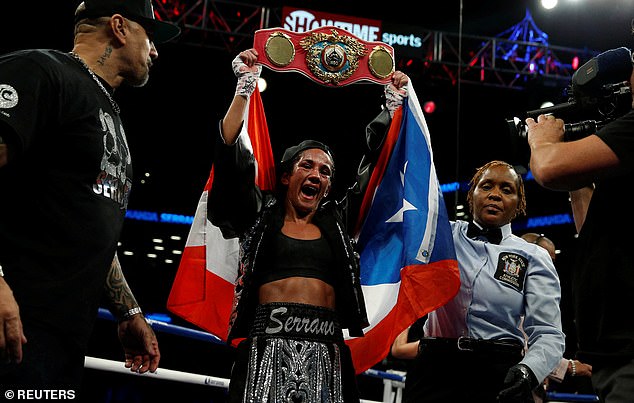 ‘We’re eyeing a seven-figure payday for Amanda in 2022, and that right there will just prove to the rest of the world that women need to be paid more in this sport. Because they are the most underpaid, more than anybody. That’s what I’m looking to do.’

As far as Serrano was concerned, she was already doing amazing things before Paul came along, unifying the world featherweight title against Daniela Romina Bermudez and defending it against Yamileth Mercado in the same year in 2021.

‘It’s funny,’ she said. ‘It took Jake Paul to actually have people acknowledge me and to know who I am. I’ve been a pro for 12 years, been doing the same thing, been a seven-division champion for, what, two years now. Three years. And I’ve never got what I’m getting now.’ 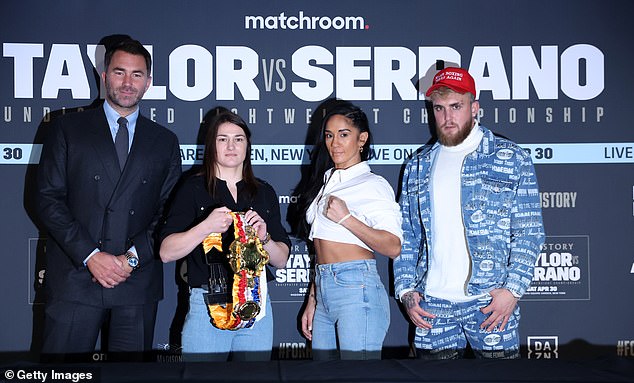 With Paul and Hearn forming an unlikely partnership to promote this colossal event, all eyes are on women’s boxing in a vital shot in the arm for a sport that has been cast aside and dismissed for too long.

‘As good a fight as that is, come on, for whatever reason it is, people don’t particularly pay attention to the women fights,’ he said. ‘The answer is ESPN made the schedule and they couldn’t care less.

‘I don’t wanna denigrate fights, I don’t wanna be accused of being anti-women in sports, but I’m telling you, this is like the Premier League against women’s football.’

Paul slammed him as a ‘dinosaur’, while Hearn insisted people of an older generation have a different way of thinking – claiming this would be one of the greatest fights of all time, never mind women’s boxing. 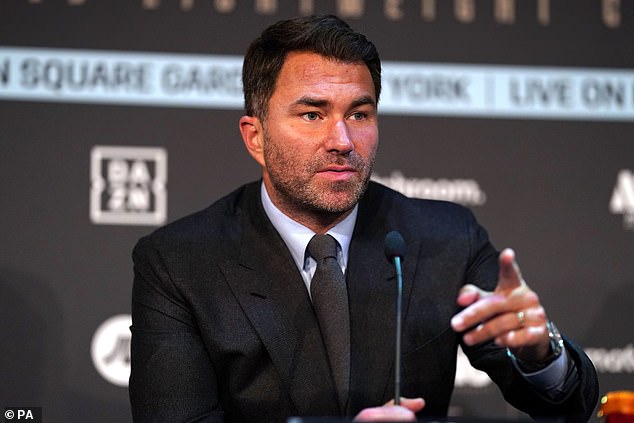 Hearn in particular has transformed the female sport in a way that no one else has. Like Serrano, Taylor sent her future promoter a message on Twitter in 2016 in what was a shot in the dark at the time, but one the Matchroom chief took with both hands after the Irish boxer’s storied success as an amateur, winning 175 bouts.

In that message, she promised to bring women’s boxing into focus and generate serious interest – and she has more than delivered after storming to four world title championships and becoming undisputed in the process.

Twenty straight wins have followed – not bad for a fighter who has only been pro for six years. She has done exactly what she said she would do and has quickly become the poster girl for women’s boxing.

The fanbase she has developed has been a huge boost to Matchroom’s commercial and broadcasting partners, with DAZN admitting she has become a real marketing weapon for them. 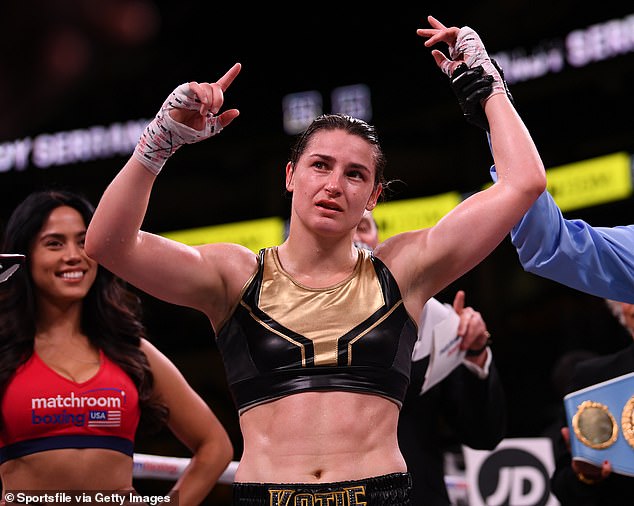 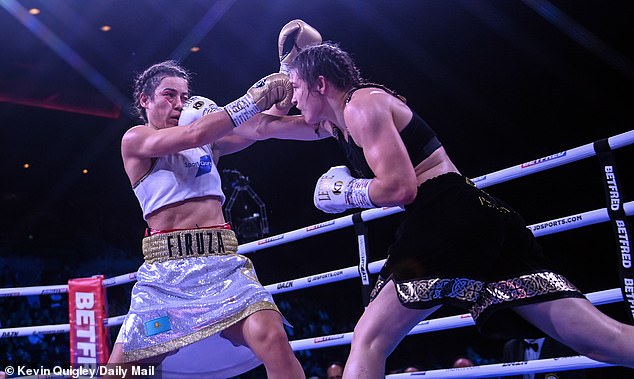 ‘For us, we make decisions based on economic interests and the growth of our business and the health of our partners’ businesses,’ said the company’s executive vice president Joe Markowski.

Taylor has already become one of the biggest stars in the women’s sport and now has the chance to claim a stake as one of the greatest female boxers ever by seeing off the threat of someone with the reputation of Serrano.

Adding another layer of spice is that Serrano will be out for revenge after Taylor defeat her sister Cindy on points back in 2018. 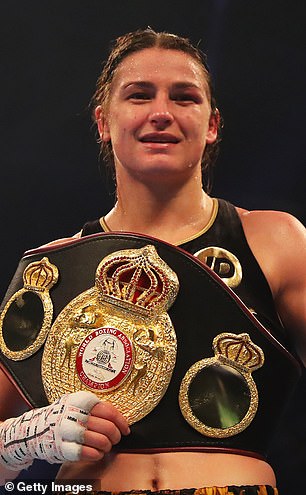 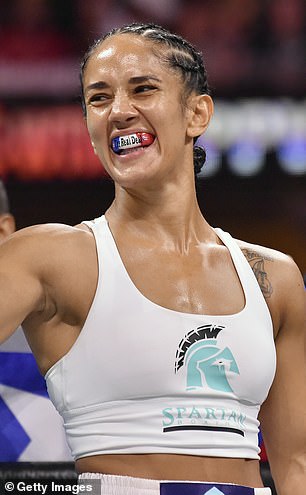 With both Taylor (left) and Serrano (right) at the top of their games, this is as big as it gets in women’s boxing

There is already plenty of intriguing sub plots to this fight and it needs little more promotion, but Taylor has stoked it up as possible one of the greatest that has ever graced MSG, saying it could have the same impact as Muhammad Ali vs Joe Frazier.

‘I think the fight on Saturday night is going to absolutely be awe-inspiring for people,’ she said. ‘I feel like stylistically we match up very very well and it’s going to make for a phenomenal fight and I think this fight is going to be talked about for years and years to come.

‘Every time you say Madison Square Garden you think of the likes of Muhammad Ali and Joe Frazier, these kinds of fighters – fights that we still talk about to this day.

‘So I feel like the fight between myself and Amanda will be talked about for years and years to come as well. And absolutely think there will be follow-through with regards to the payday as well.’

Simply mentioning a fight in the same breath as Ali v Frazer is a cardinal sin in the book of the most fanatic boxing fans, but there is no doubt this will be a historic night. As far as women’s boxing is concerned, this is as big as it gets.