Katie Price showed off the results of her 16th boob job as she posed up a storm at in a very racy outfit at the KSI v FaZe Temperrr boxing match on Saturday.

The former glamour model, 44, slipped her curves into a sheer black catsuit and covered her nipples with duct tape while pouting for photographers.

She added inches to her hourglass figure in a pair of dazzling silver boots and ran her hands through her light brown tresses upon arrival at OVO Arena Wembley.

Wowzers! Katie Price showed off the results of her 16th boob job as she posed up a storm at in a very racy outfit at the KSI v FaZe Temperrr boxing match on Saturday

She was soon joined by her son Junior Andre, 17, who put on a trendy display in a yellow padded jacket, which he layered above a white T-shirt.

Katie reportedly had her 16th breast implant procedure in December in a bid to have the ‘biggest boobs in the country’.

But she was later said to have been left in ‘agony’ following the operation and suffering from severe back pain. She was also alleged to be upset with the results claiming doctors have left her with ‘wonky’ breasts.

According to The Sun the huge 2120 CC implant left her suffering from sleepless nights and she is already considering having them removed.

Shock: The former glamour model, 44, slipped her curves into a sheer black catsuit and covered her nipples with duct tape while pouting for photographers 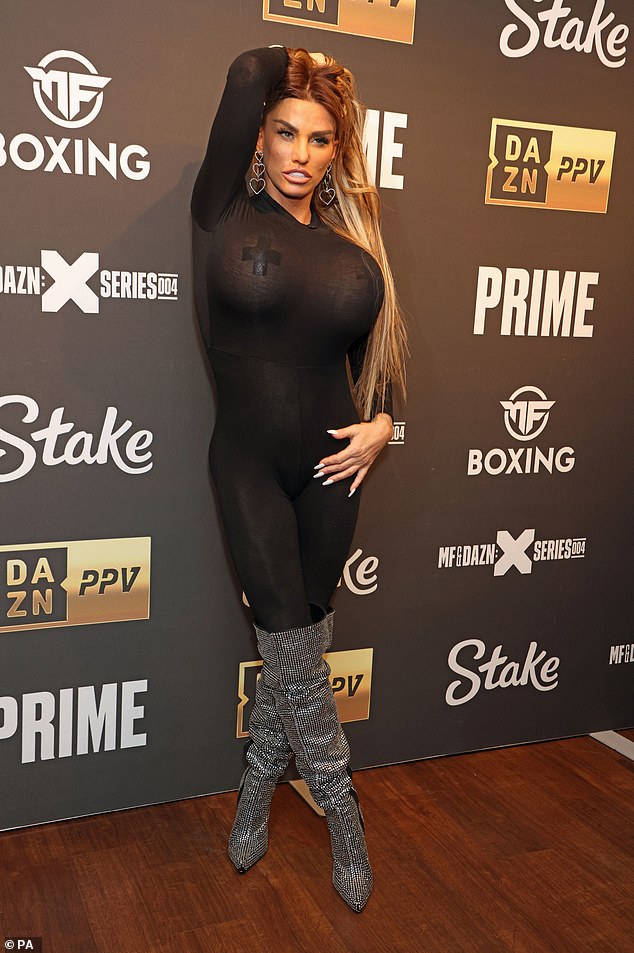 Jaw-dropping: Katie soaked up the attention as she flaunted her figure 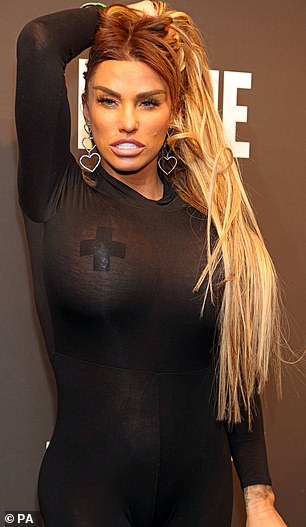 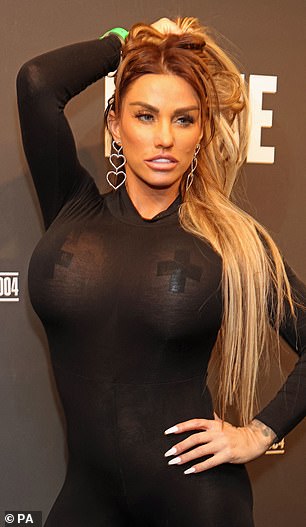 Woah! Katie reportedly had her 16th breast implant procedure in December in a bid to have the ‘biggest boobs in the country’ 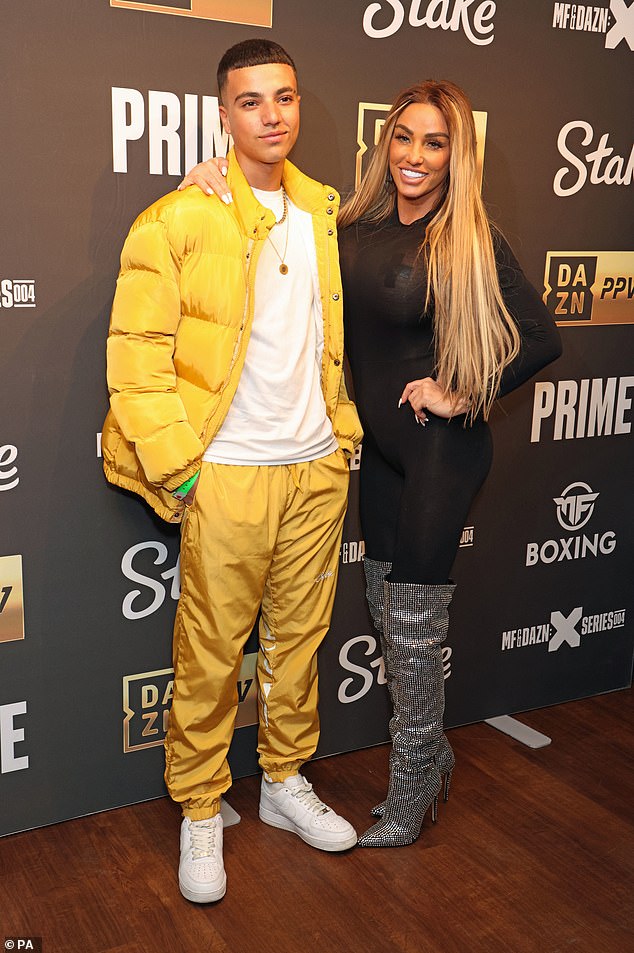 Family: She was soon joined by her son Junior Andre, 17, who put on a trendy display in a yellow padded jacket, which he layered above a white T-shirt 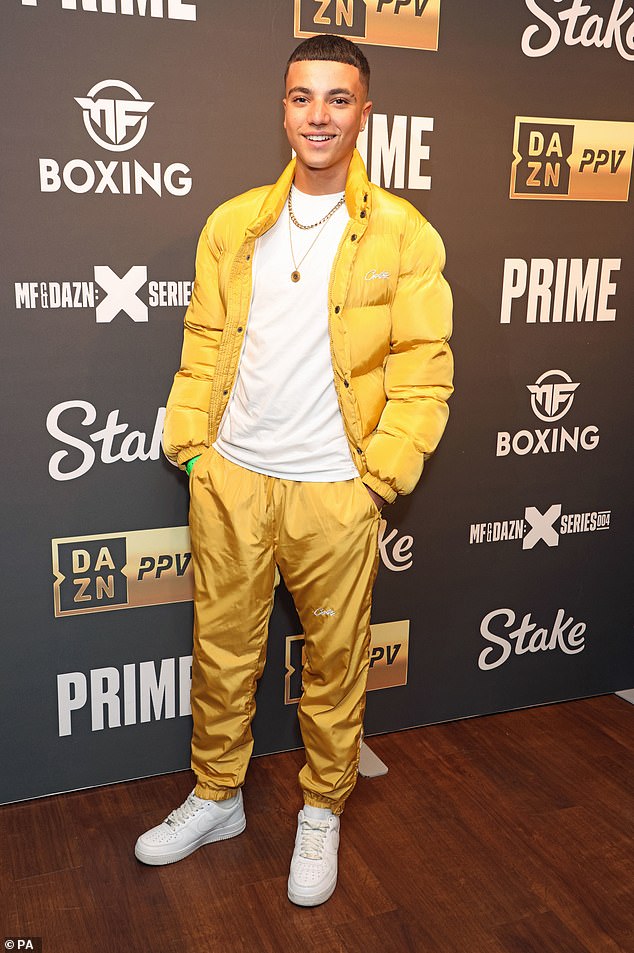 Looking good: Junior continued his look with a pair of coordinating yellow joggers 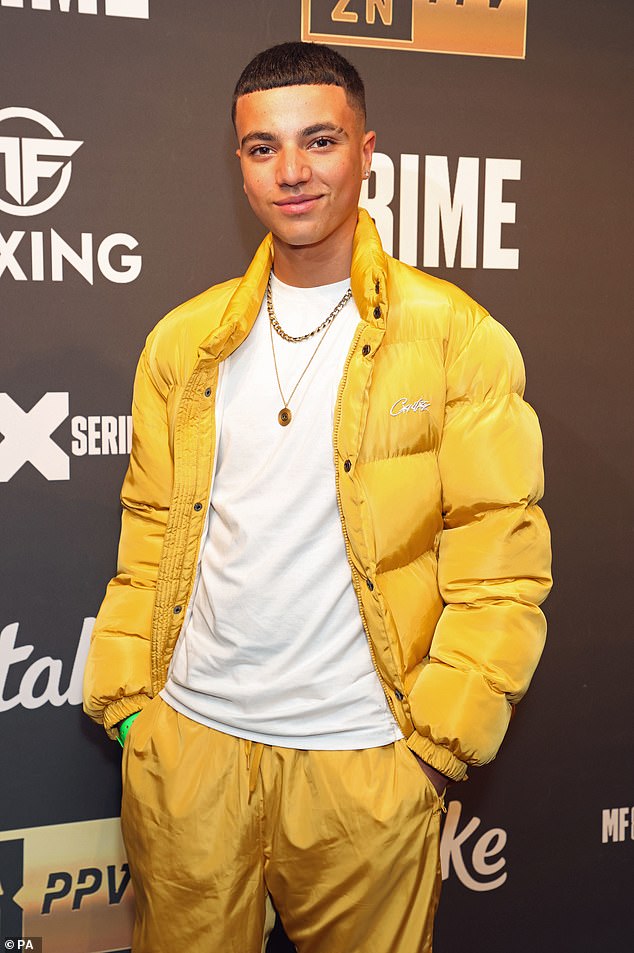 Stylish: The rapper accessorised with a pair of gold necklaces

YouTuber KSI will make his return to the ring as he takes on replacement opponent FaZe Temperrr in the latest Misfits boxing card.

The British entertainer was due to face inactive MMA fighter Dillon Danis in the main event, before the American pulled out just 10 days out – according to KSI’s management due to a lack of preparation.

Instead, KSI – who insists he will fight Jake Paul later this year – takes on another entertainer in FaZe Temperrr, who was already on the bill, previously scheduled to fight an unnamed mystery opponent. 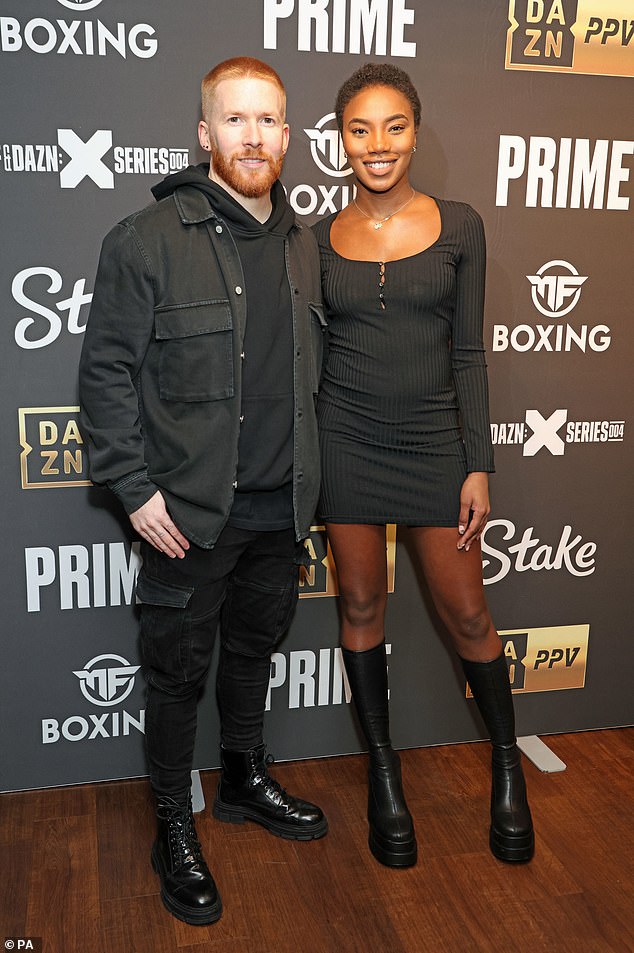 Couple: Neil Jones and his girlfriend Chyna Mills put on a cosy display 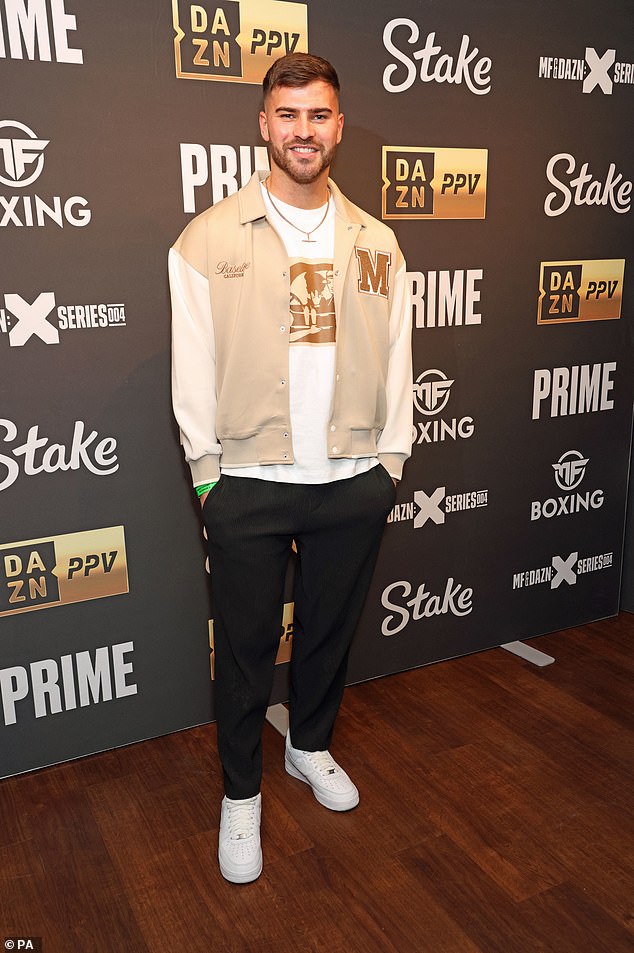 Straight-faced: ArrDee shot a serious expression and flashed an L sign with his hand while Louis Theroux wore a light blue sweater

KSI received backlash after claiming two wins in one night in his most recent outing in August, with opponents Luis Alcaraz Pineda and Swarmz – replacements for the injured Alex Wassabi – putting in poor showings.

FaZe Temperrr again carries less reputation than either Danis or Tyron Woodley, who was also linked with a fight.

He has teamed up with former heavyweight and now Deontay Wilder’s coach, Malik Scott, however, in a sign of his intent ahead of the fight.

Chilly? Shayna Marie wrapped up in a green coat while Deji Olatunji shot a thumbs up 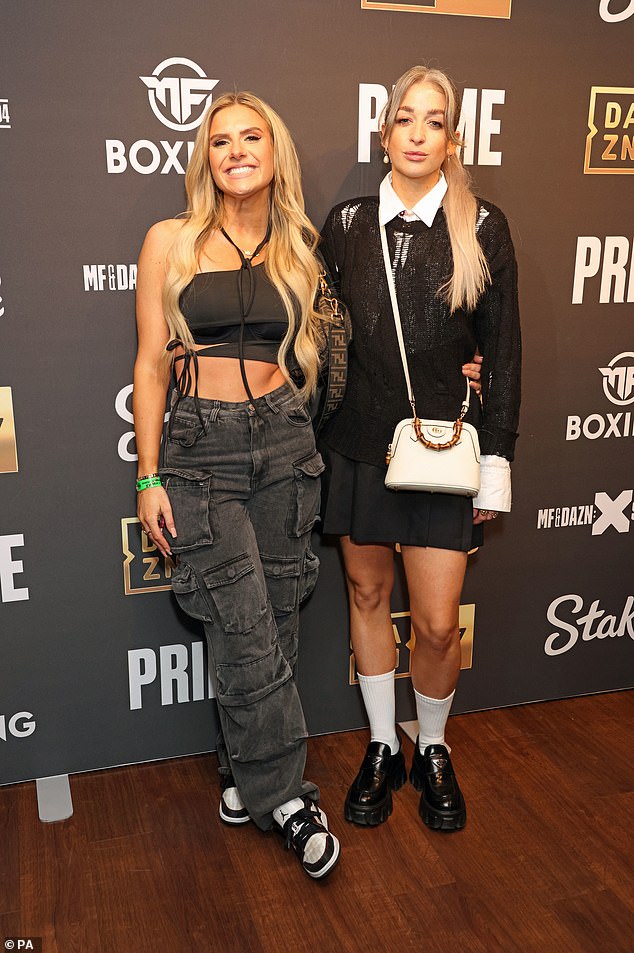 Leggy: Chyna flashed her legs in a black minidress while AJ Tracey kept things casual in a paint-splattered grey tracksuit 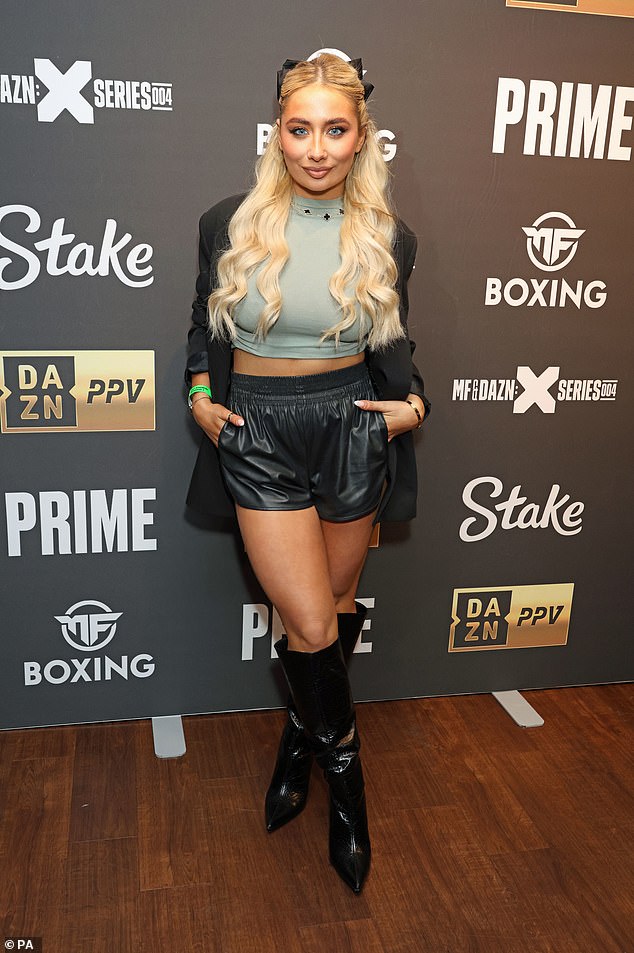 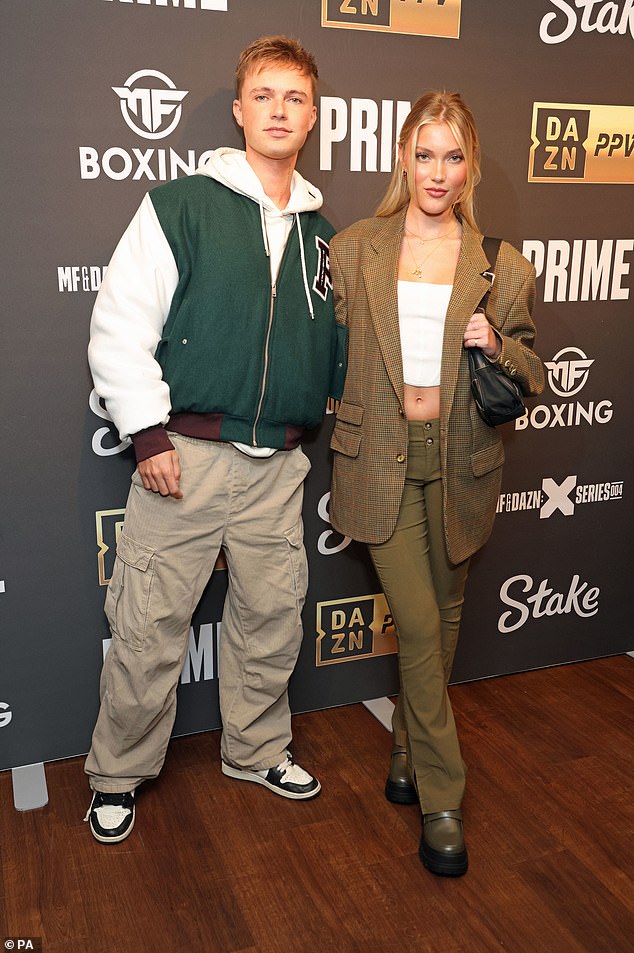 Adorable: HRVY and his girlfriend Leanna Cavanagh put on a loved-up display

The clash between KSI and FaZe Temperrr is scheduled to take place on Saturday, January 14 at the OVO Arena in Wembley, London.

The pair are expected to walk to the ring at around 10pm for those in the UK, though that will of course depend on results beforehand.

There is also an abundance of action on the undercard, with musician Tom Zanetti going up against Slim, while Anthony Taylor – who lost to Tommy Fury in 2021 – is also on show. 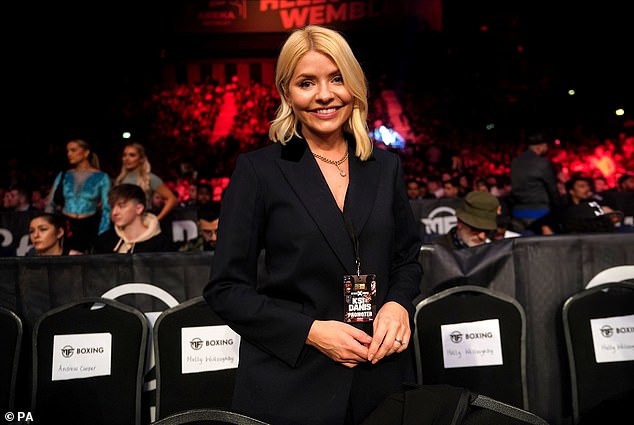 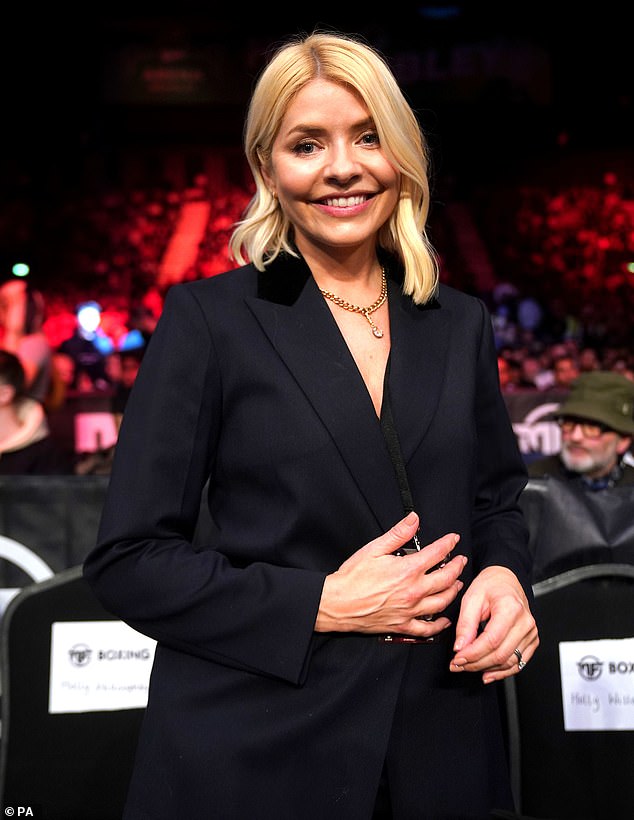 Stunning: She looked classy in a black blazer featuring a plunging neckline

The fight will be broadcast live on DAZN PPV in the UK, with coverage starting at 7pm.

KSI and FaZe Temperrr have been largely respectful throughout the short build-up to their fight, though they did exchange some fiery words at Thursday’s press conference.

FaZe Temperrr insisted he will give KSI his hardest night in the ring to date, which the Briton emphatically disagreed with.

Emerging: Katie looked incredible as she arrived at the event. She accentuated her natural beauty with a full face of make-up 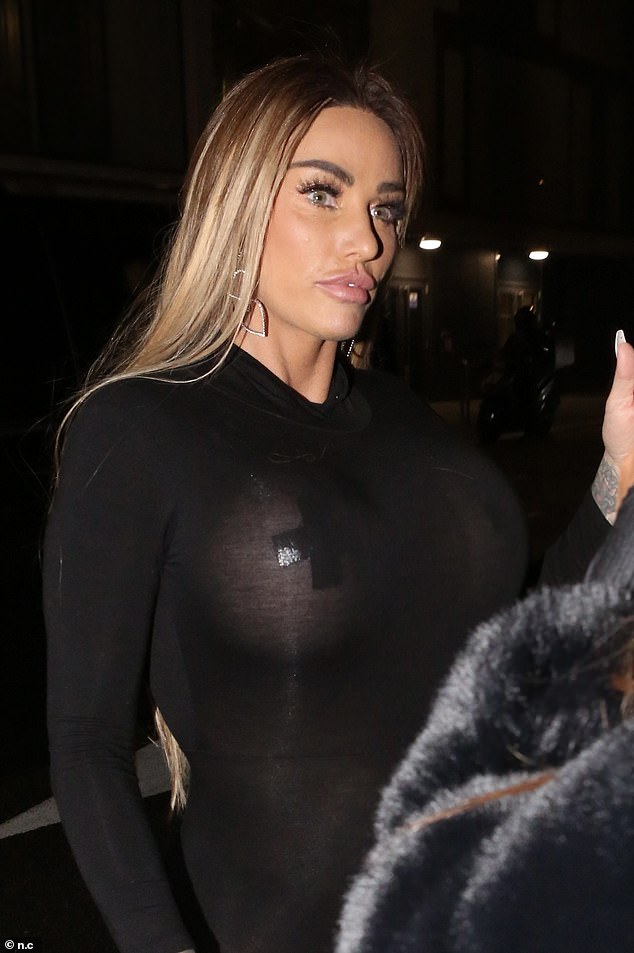 Hitting the town: She flaunted her surgically-enhanced breasts through the sheer number 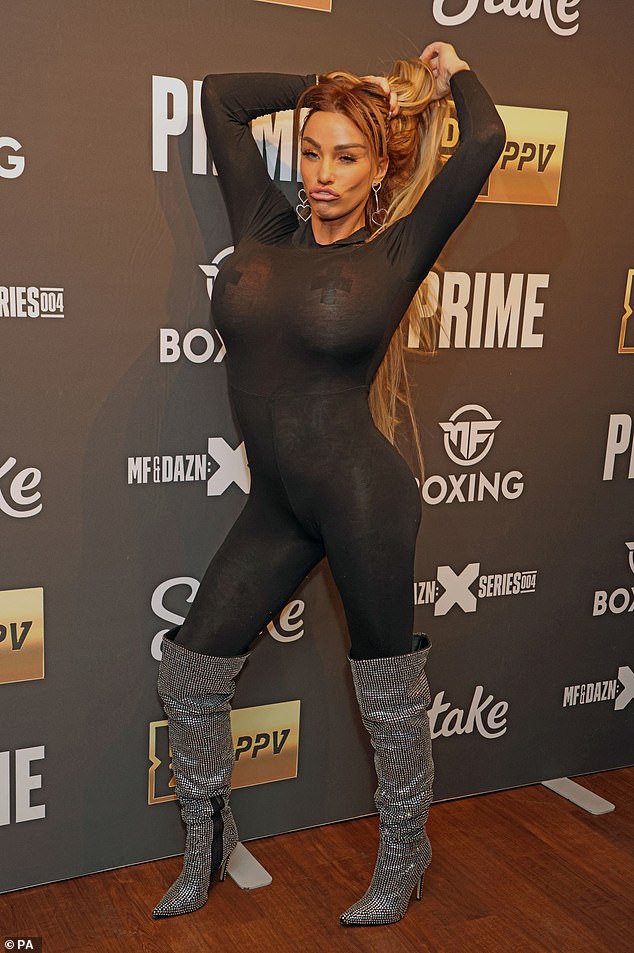 Glamorous: She pouted up a storm for photographers against the press wall

‘No, it definitely won’t,’ KSI said. ‘It’s great to see Malik Scott helping you train, it doesn’t matter, because your power is going to do nothing to me.

‘I have been fighting people heavier than me in sparring and they have hit me with bombs, and I have yet to be dropped.’

He continued:  ‘You’re going to sleep man, and you might not be getting up from this one. I do feel sorry for you, I can see all the doubt coming through.

‘It makes sense, no one wants to see you get hurt. Either way, I respect you for getting in the ring because Dillon Danis couldn’t do that. He’s not a real fighter. You are, but you’re getting knocked out.’ 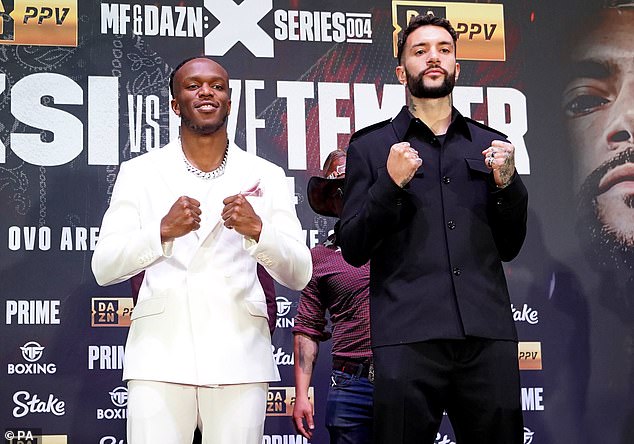 Bring it on! YouTuber KSI (left) will make his return to the ring as he takes on replacement opponent FaZe Temperrr (right) in the latest Misfits boxing card