Kate Winslet has offloaded her chic New York City penthouse less than six months after putting it on the market for $5.69 million.

The actress, 45, previously had the property, a four bedroom duplex located in Chelsea, listed as a rental for $30,000 a month, according to the New York Post.

Now the Titanic star is in contract to sell the stunning piece of Manhattan real estate, which boasts 13-foot tall ceilings, plenty of natural sunshine and an outdoor deck with incredible views of the city.

Sold! Kate Winslet has offloaded her chic New York City penthouse less than six months after putting it on the market for $5.69 million

The 3,018 square foot loft also comes with three and a half bathrooms, built-in storage and an open chef’s kitchen.

Guests can take in the stunning city views from inside the living room, which houses a fireplace and arty gold chandelier.

The next homeowner will also have plenty of storage space with a wall full of built-in cabinetry located right in the living room. 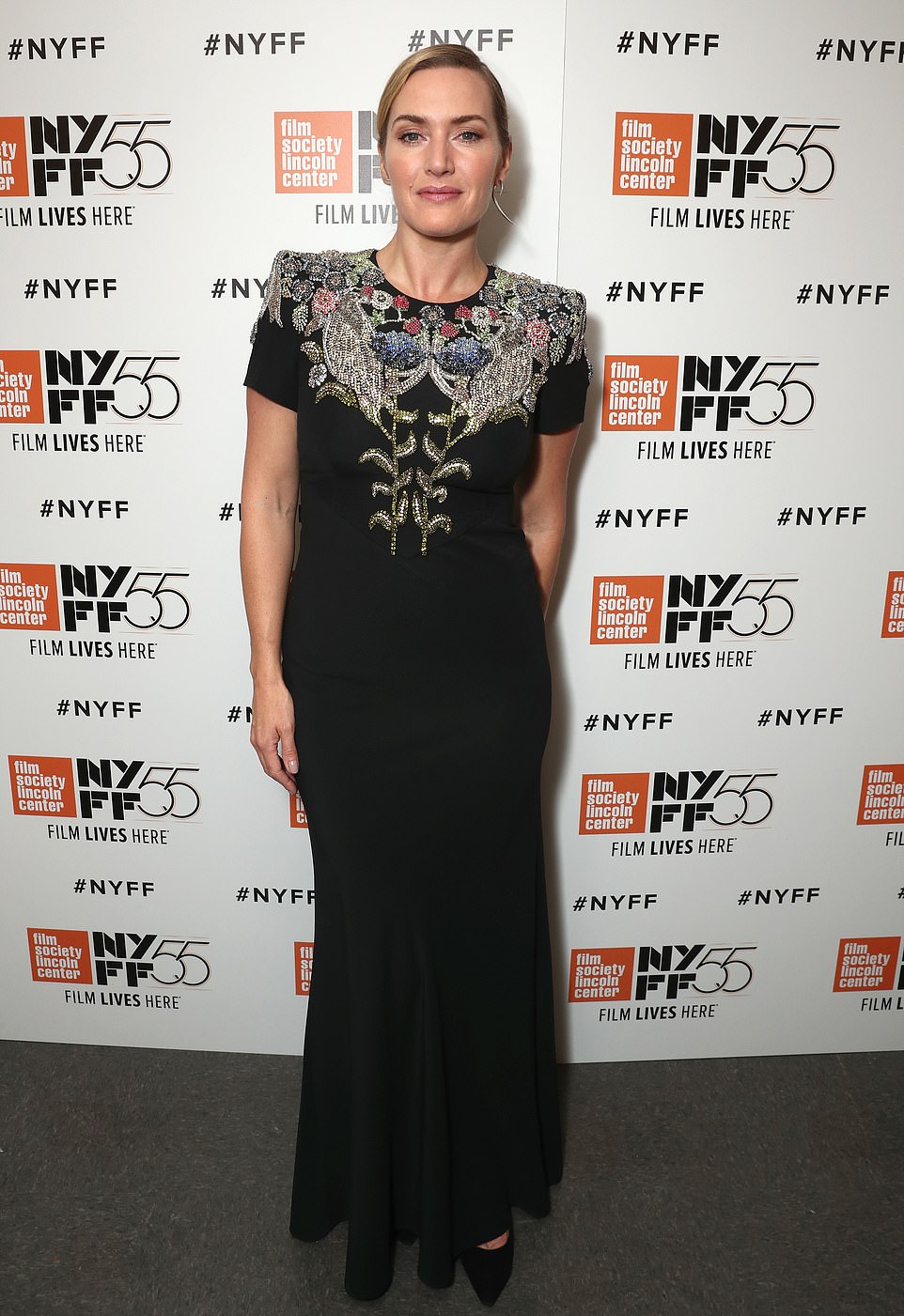 New York, New York: Winslet previously had the stunning property listed as a $30,000 a month rental 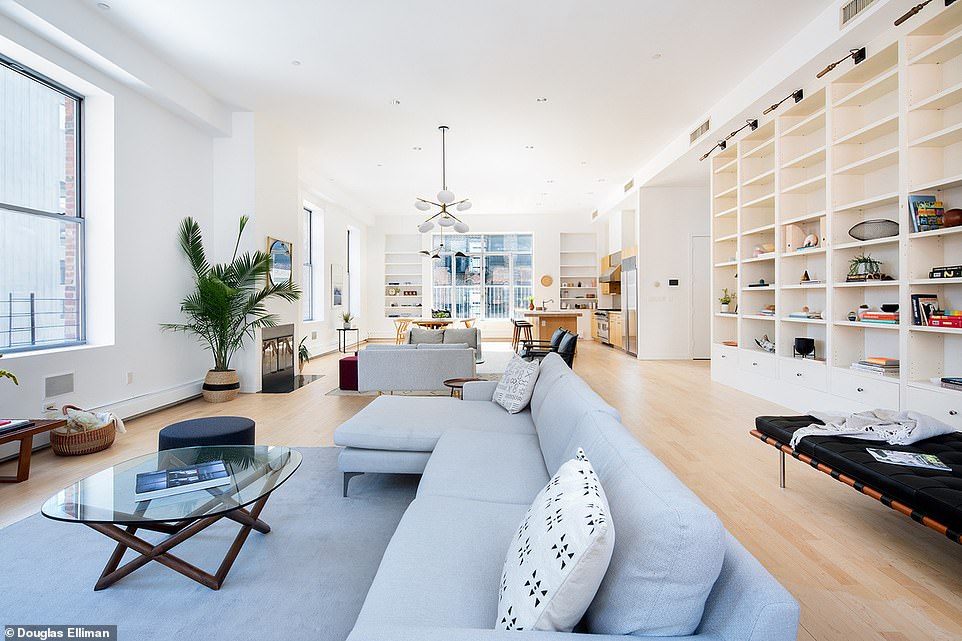 Kick back: The sophisticated loft boasts plenty of space, built-in cabinetry and tons of natural lighting 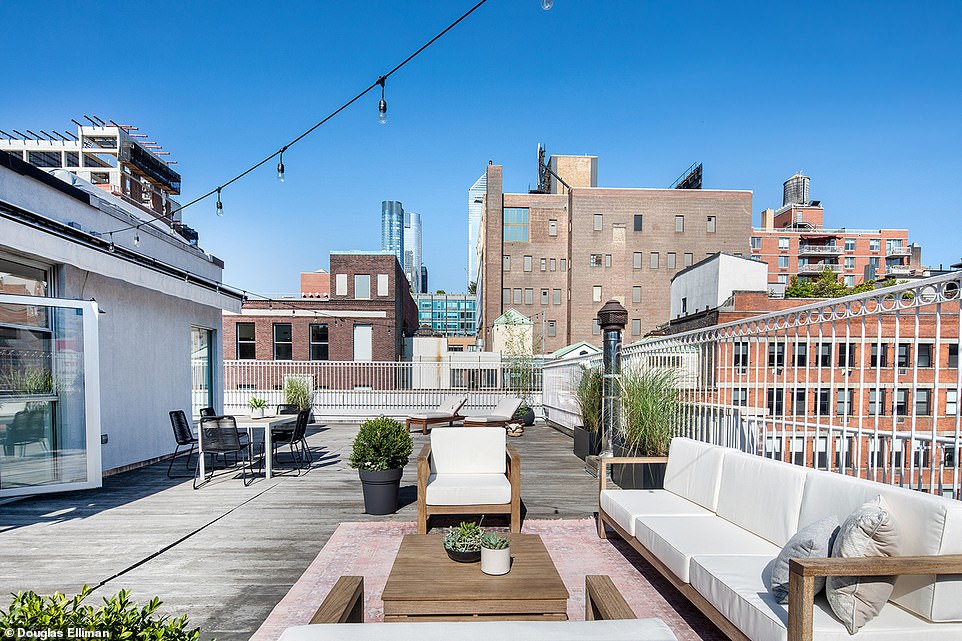 Rubbing elbows: The incredible deck makes the apartment the perfect place for relaxation and entertainment

A rarity in some New York apartments, all of the bedrooms come with large windows allowing for tons of natural sunshine to pour inside.

Chic hardwood floors add a modern and clean touch all throughout the loft.

Contrasting the overall sleek vibe of the duplex is the elegant bathroom.

The next homeowner will be able to soak inside a luxurious clawfoot bathtub, rinse off inside a chic shower, all beneath a translucent hanging chandelier. 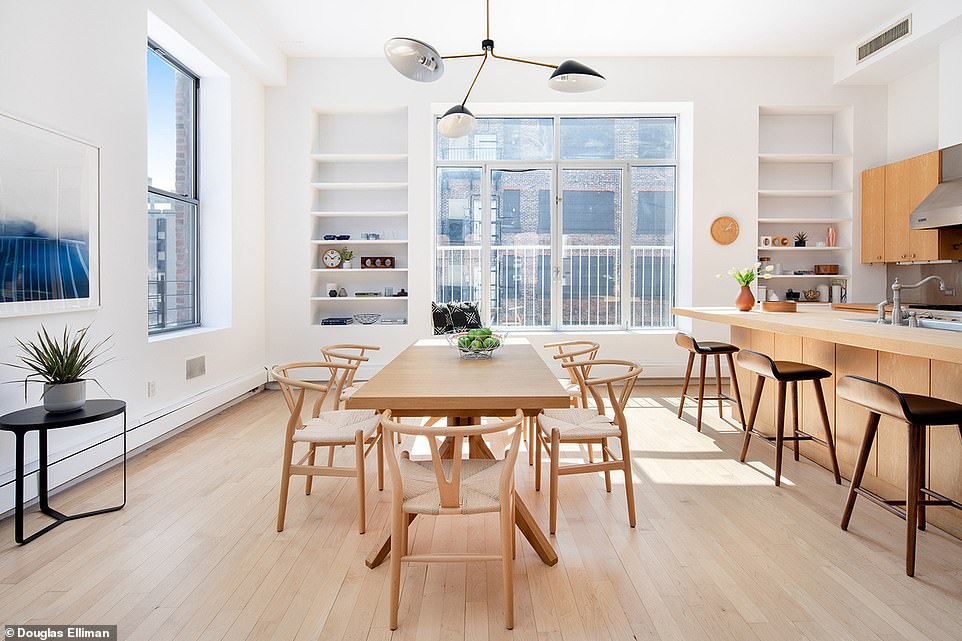 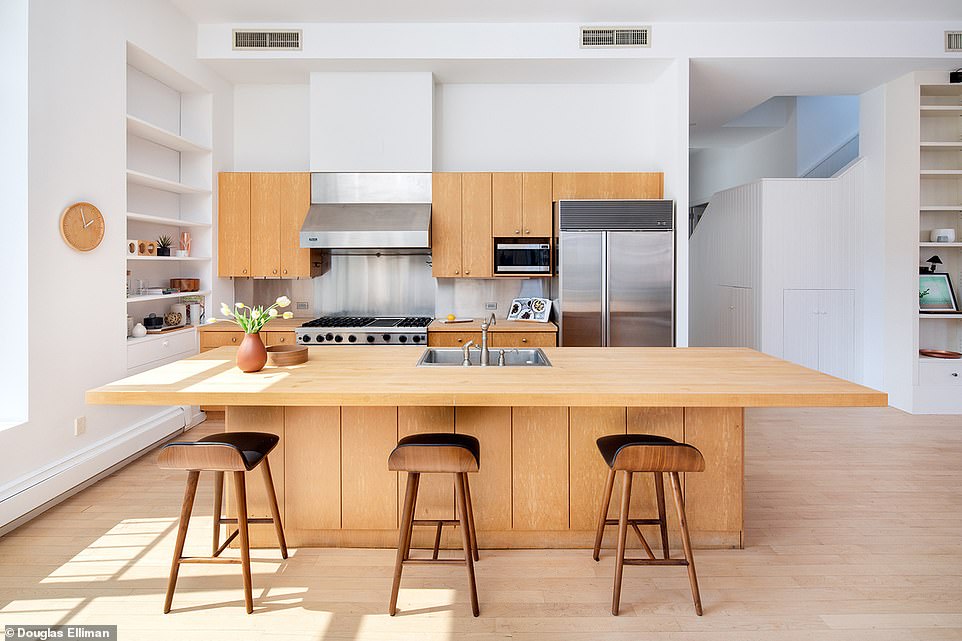 What’s cooking? A sleek metallic stove and fridge add a modern touch to the kitchen

Perhaps one of the most jaw-dropping features of the property is the incredible deck.

Guests can take in the incredible views whilst relaxing upon the spacious outdoor area.

Nowadays, Kate has been living much of her life across the pond at her historic estate outside of London with her husband Edward Abel Smith, according to the NY Post.

Her current accommodations are certainly a far cry from the world she was recently inhabiting as part of her role in the new HBO series, Mare Of Easttown. 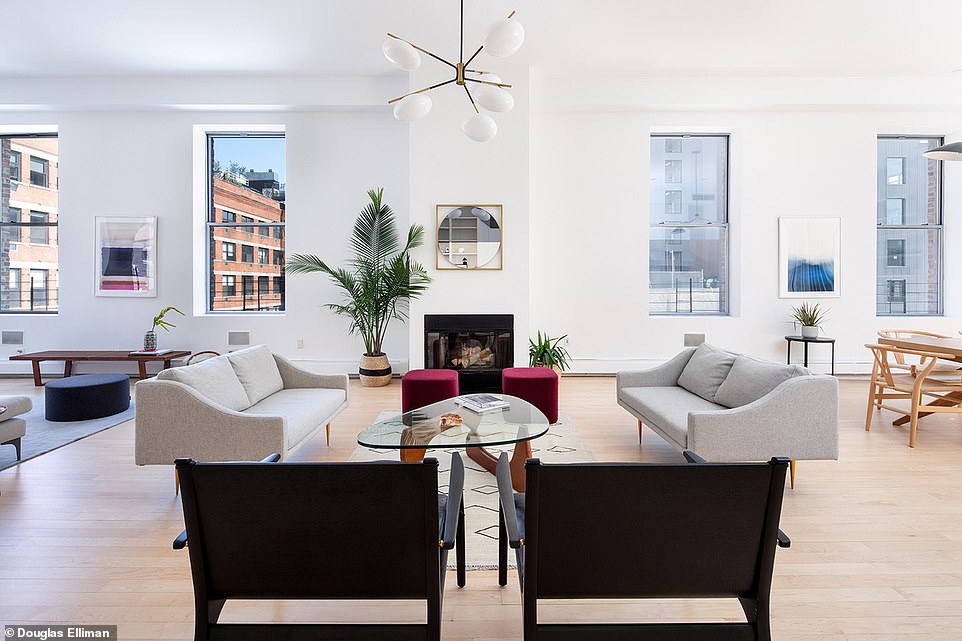 Sophisticated: The next homeowner will be able to relax beside a roaring fireplace with stunning views of the city 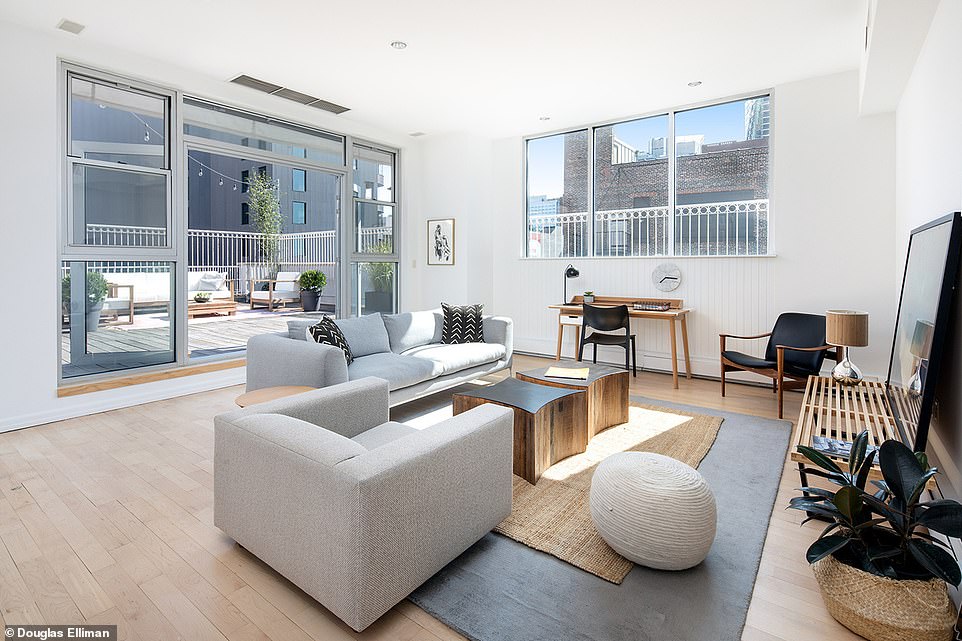 Ray of sunshine: Unlike some New York apartments, Kate’s has plenty of windows allowing for plenty of sunshine to bathe the place

In an interview with the Radio Times, she admitted playing the eponymous lead character took a toll on her emotional wellbeing and forced her to ‘invent trauma’ to properly portray her.

Kate confessed that she struggled to shake off Mare’s inner turmoil and fraught home life, even after she wrapped up filming in the States and returned to her home in Sussex.

‘It’s a process I’m going through. It’ll be gone soon. I’ve been her for a year and a half, right? You can’t just switch it off. 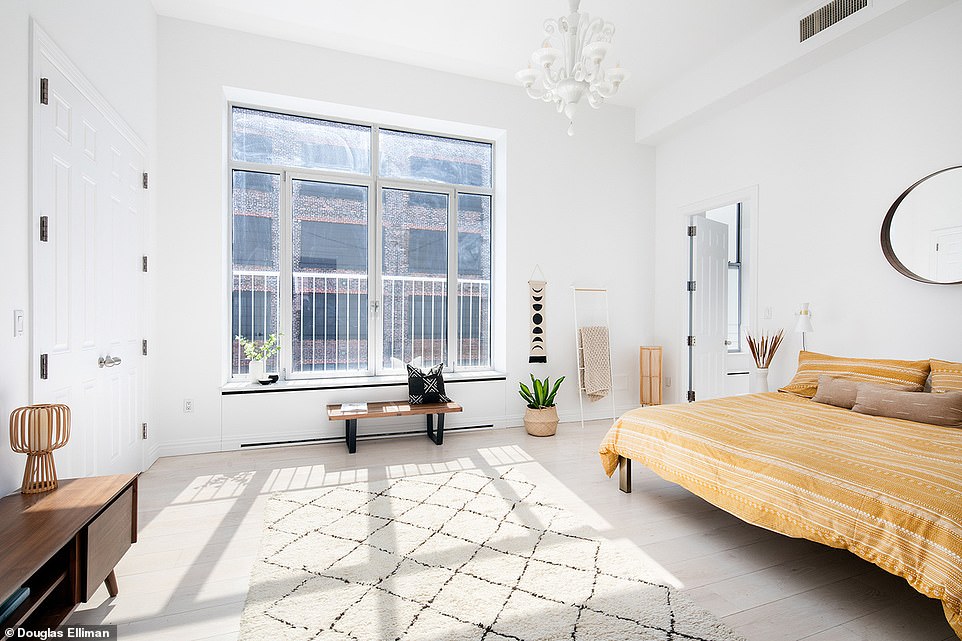 Zzzz: The loft boasts four bedrooms and three and a half bathrooms 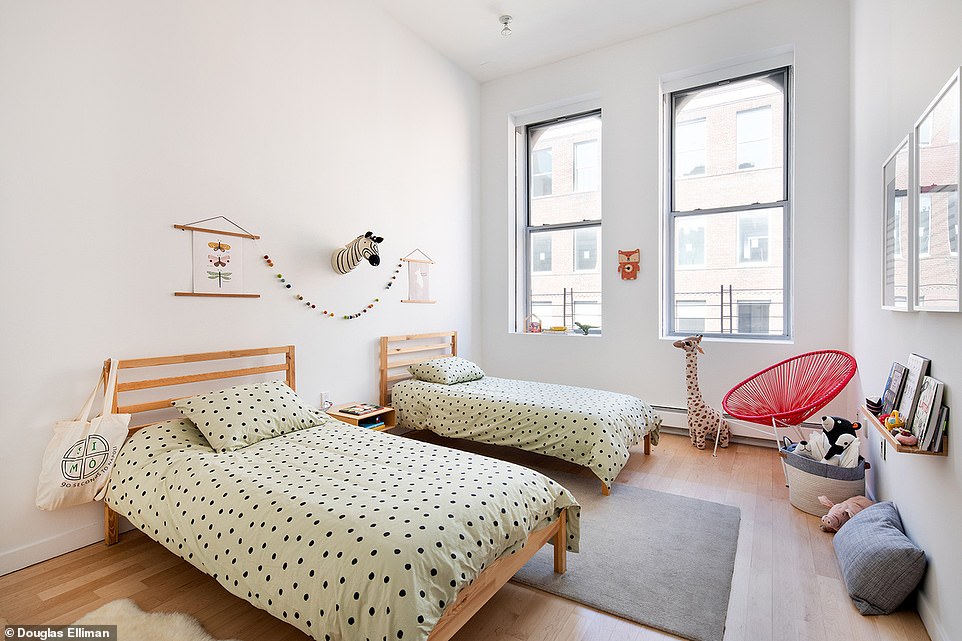 Sweet dreams: The loft is perfect for a growing family

‘I had to invent more trauma for myself to play this part than any character I’ve ever played.

‘I mean, look at me. It’s utterly, utterly stupid,’ Kate said to the publication with tears trickling down her cheeks.

According to the award-winning actress, it was not the brooding mystery and crime underpinning the drama which affected her, but rather Mare’s strained relationship with her troubled son who is absent from the home.

She continued: ‘There’s clearly something in me that’s bound up in the guilt.

‘As a mother, one feels for certain things. And you know, not that I have huge things as a mother to particularly feel guilty about myself, but we can always do better as mums. 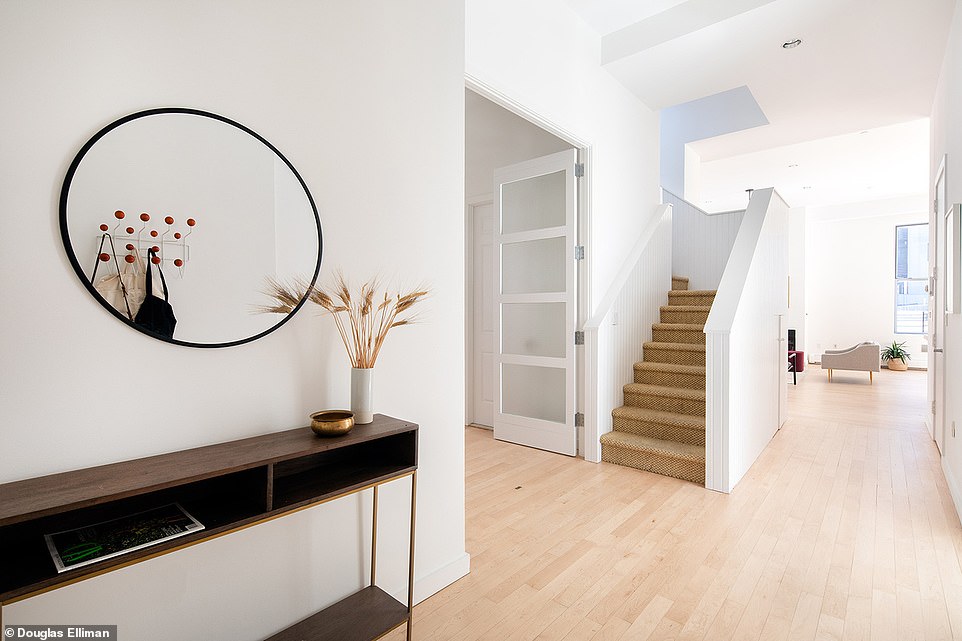 Big Apple sophistication: Chic hardwood floors add a modern and clean touch all throughout the loft 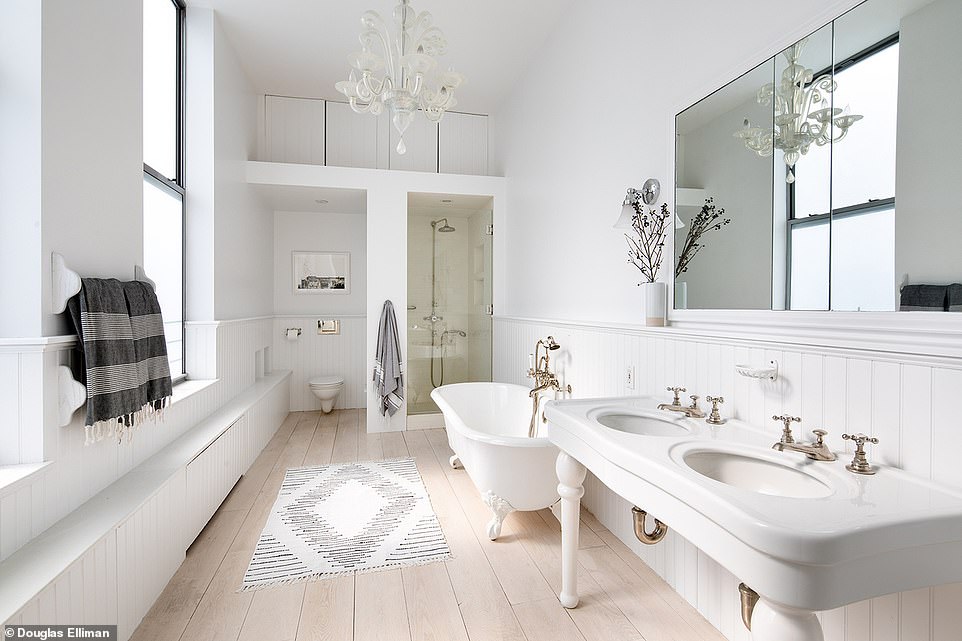 Rub a dub dub: The next homeowner will be able to soak inside a luxurious clawfoot bathtub, rinse off inside a chic class-encased shower, all beneath a translucent hanging chandelier

‘We all have something where we wish we’d said it differently or perhaps made a different choice.’

Kate has daughter Mia, 20, with her first husband Jim Threapleton, son Joe, 17, from her second marriage to Sam Mendes, and Bear, seven, who is the son of her husband Edward.

Kate confirmed there were many negative underlying themes affecting her character, Mare, which she identified with, even if they weren’t present among her own family.

‘I was very struck by how relevant a lot of the underlying themes in Mare truly felt to me.’ 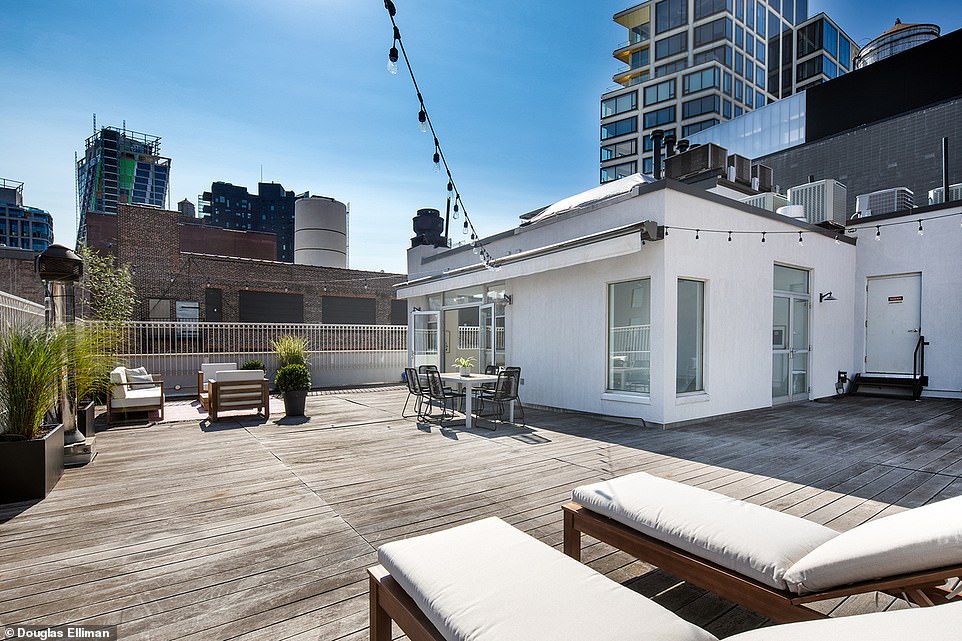 Perfect place to hang out: Perhaps one of the most jaw-dropping features of the property is the incredible deck