The Duchess of Cambridge was in her element as she got stuck in with outdoor activities during a visit to a London Scouts Group today.

Kate Middleton, 38, dressed down in jeans, a favourite gilet and a Scouts woggle to meet Cub and Beaver Scouts in Northolt, west London this morning.

The Duchess, who has often spoken of her love of the great outdoors, joined the children in toasting marshmallows and writing letters to send to care home residents during the outdoor engagement.

The visit coincided with Kate being named joint president of the Scouts. Kate is sharing the position – her first presidency of an organisation – with the Queen’s cousin, the Duke of Kent, who has been president of the youth movement since 1975.

Kate’s gone camping! The Duchess of Cambridge was in her element as she got stuck in with outdoor activities during a visit to a London Scouts Group today. Pictured, Kate toasting marshmallows over a campfire with two Scouts 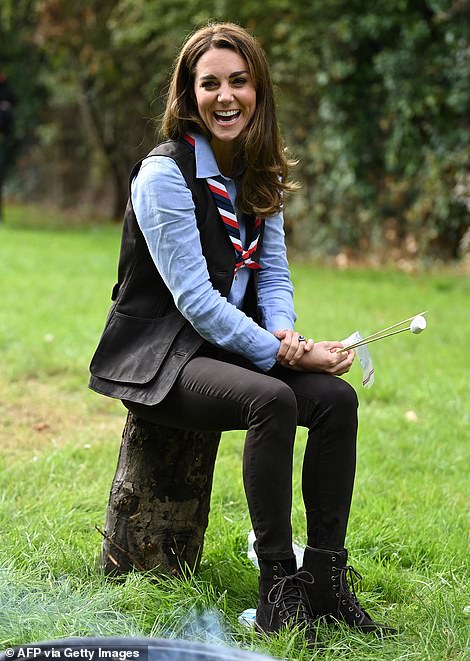 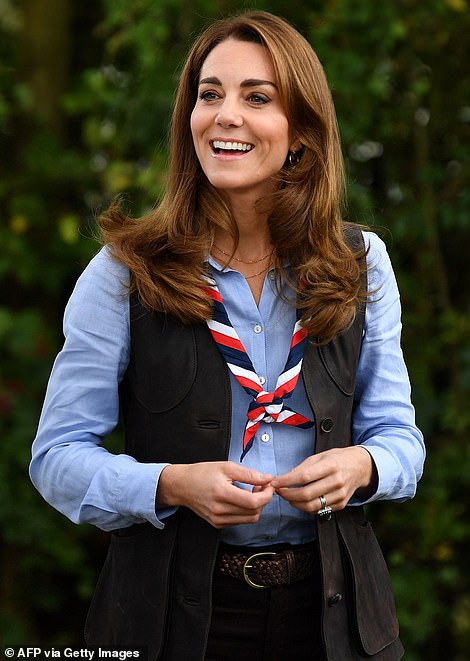 Keeping things casual: The Duchess of Cambridge dressed down for the outing, wearing a casual blue shirt with a favourite pair of Massimo Dutti jeans. In a nod to the Scouts, Kate wore a woggle around her neck (right) 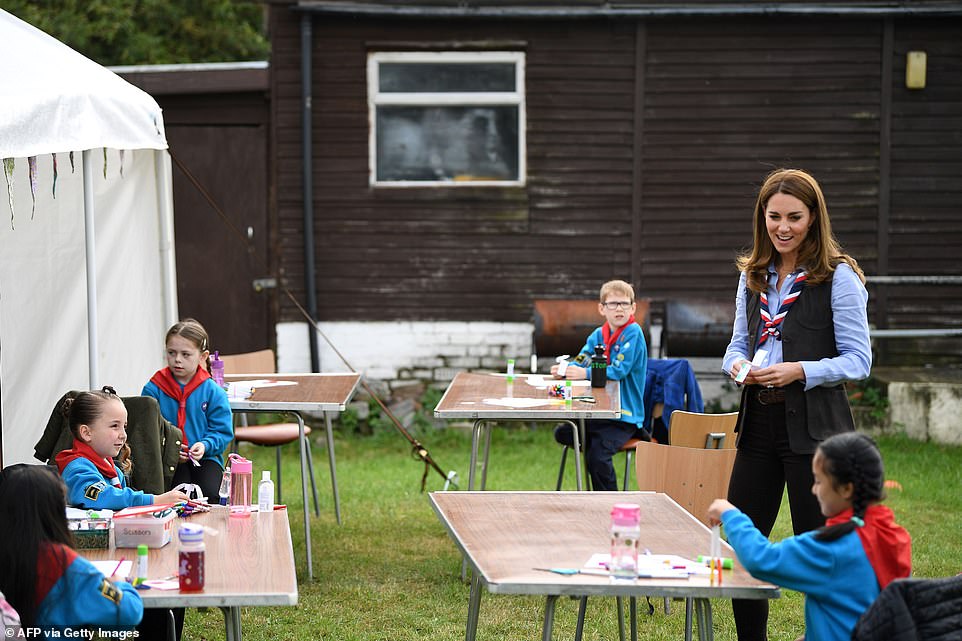 Arts and crafts! The Duchess beamed as she spoke to Scouts taking part in the outdoor art session this morning 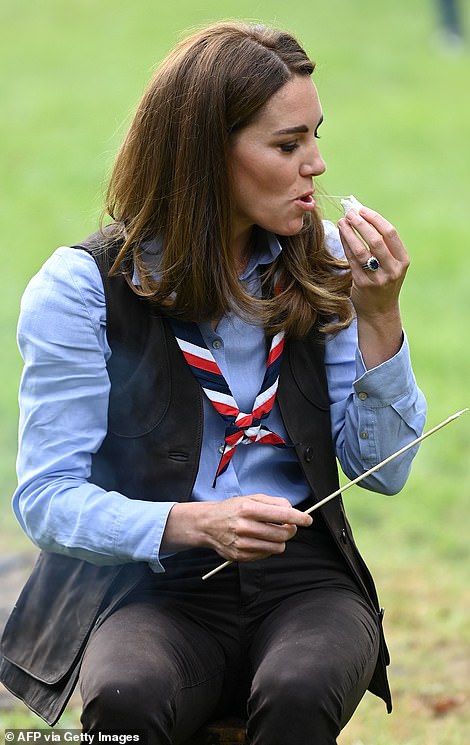 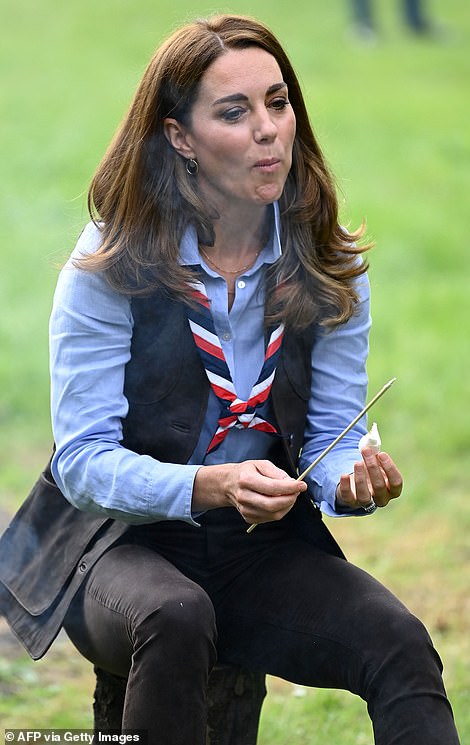 Time for a sweet treat: The Duchess of Cambridge tucked into a melted marshmallow after toasting it on the fire 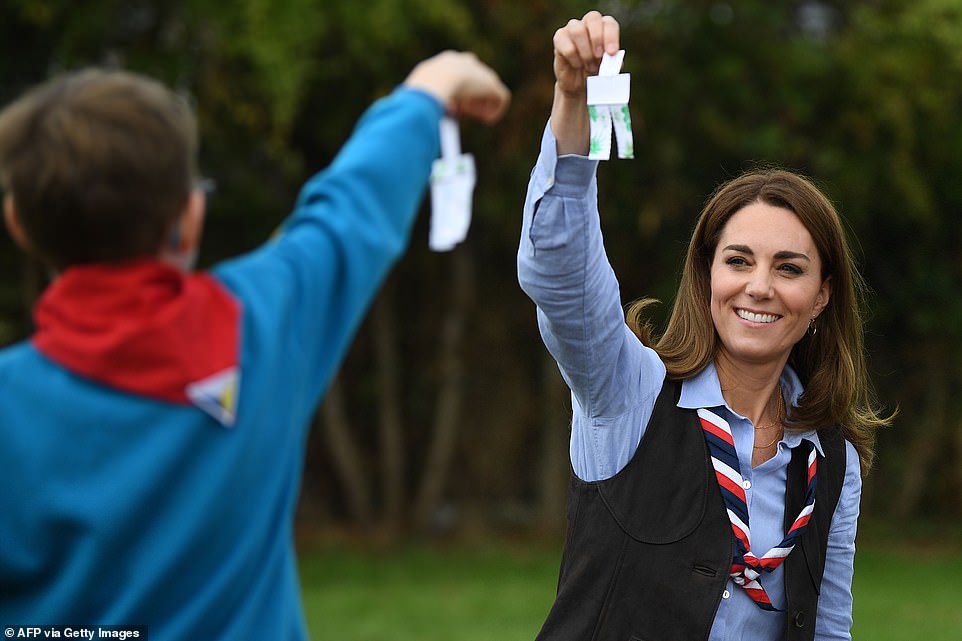 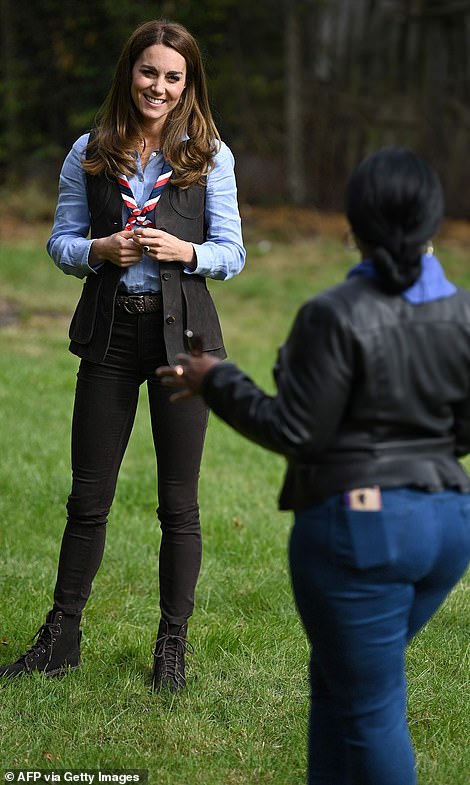 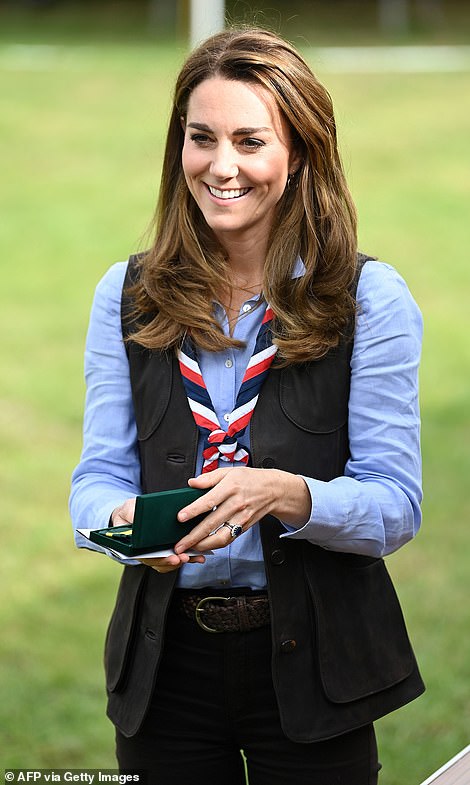 The Duchess of Cambridge heard about how the Scouts supported young people during lockdown (left). Right, the Duchess was presented with the Silver Wolf Award, the highest award made by The Scout Association which the Duke of Kent  also holds 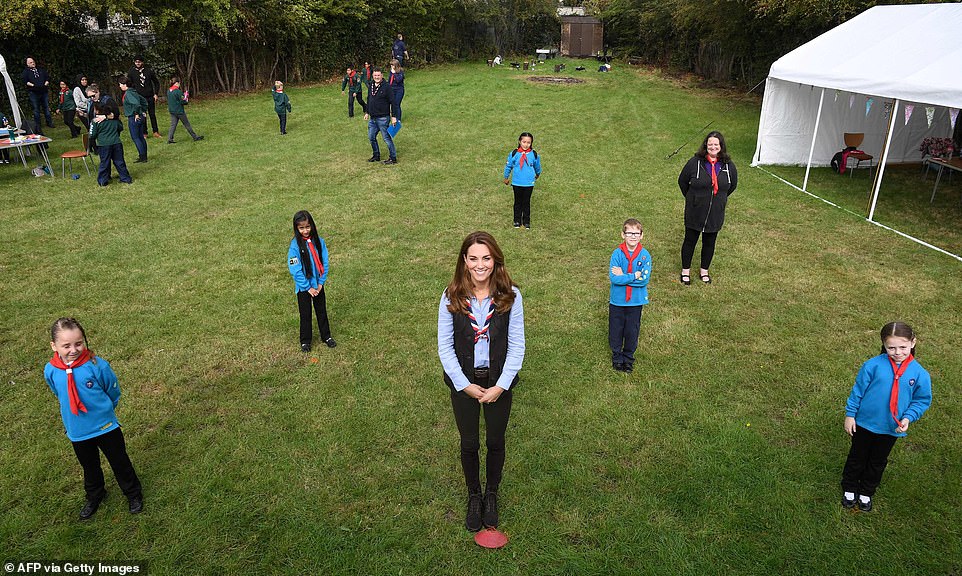 Say ‘social distancing!’ The Duchess of Cambridge and young Scouts kept their distance for a group photo

Kate described her delight at becoming joint president, saying: ‘For many children and young people, The Scout Association plays a key role as they build relationships and develop the skills they need to succeed in later life.

‘When I volunteered with the Scouts on Anglesey eight years ago, I was struck by the huge impact the organisation has on inspiring young people to support their communities and achieve their goals.

‘I am delighted to be joining the Duke of Kent as joint president of the association and look forward to working with Scouts across the country as they strive to make a positive difference to our society.’

The duchess joined the 12th Northolt Scout Group in west London to mark her appointment and appeared in excellent spirits as she chatted with children and volunteers. 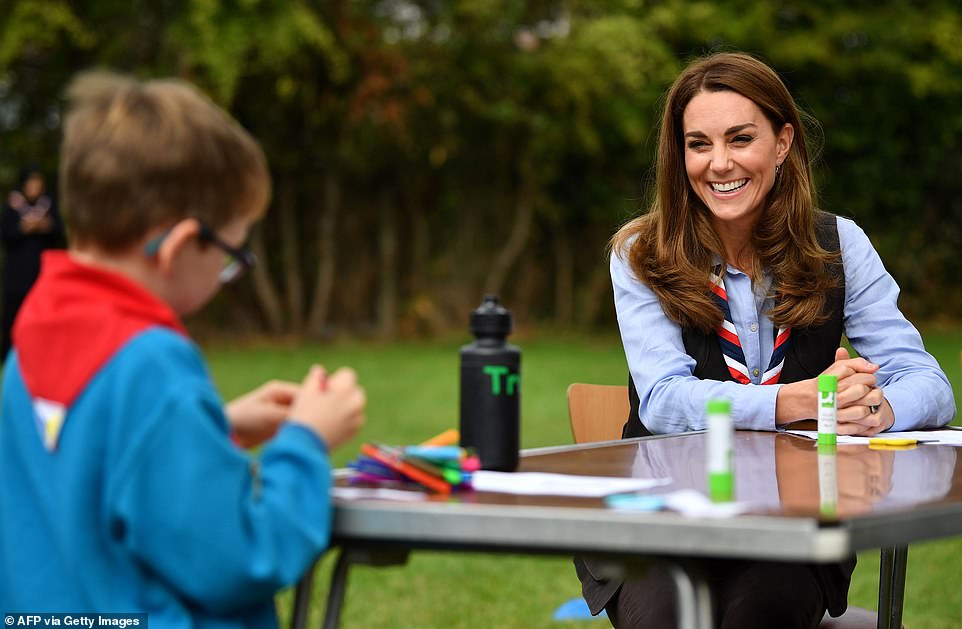 The Duchess of Cambridge beamed as she spoke to one boy at the arts table, where they made paper birds 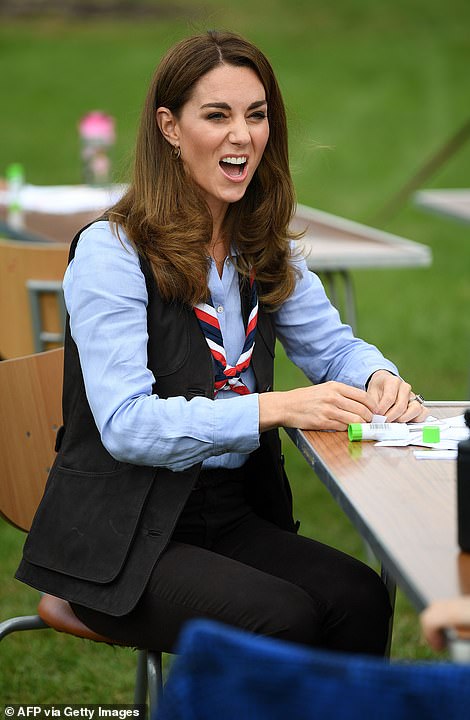 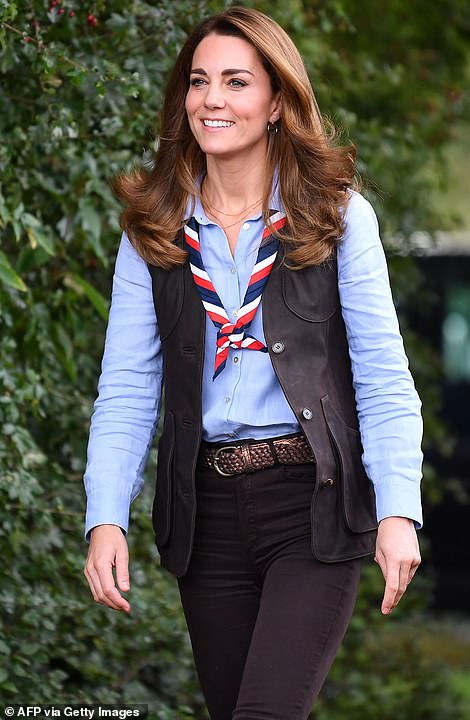 The royal looked animated as she chatted to the children about their projects. Right, arriving for the engagement today 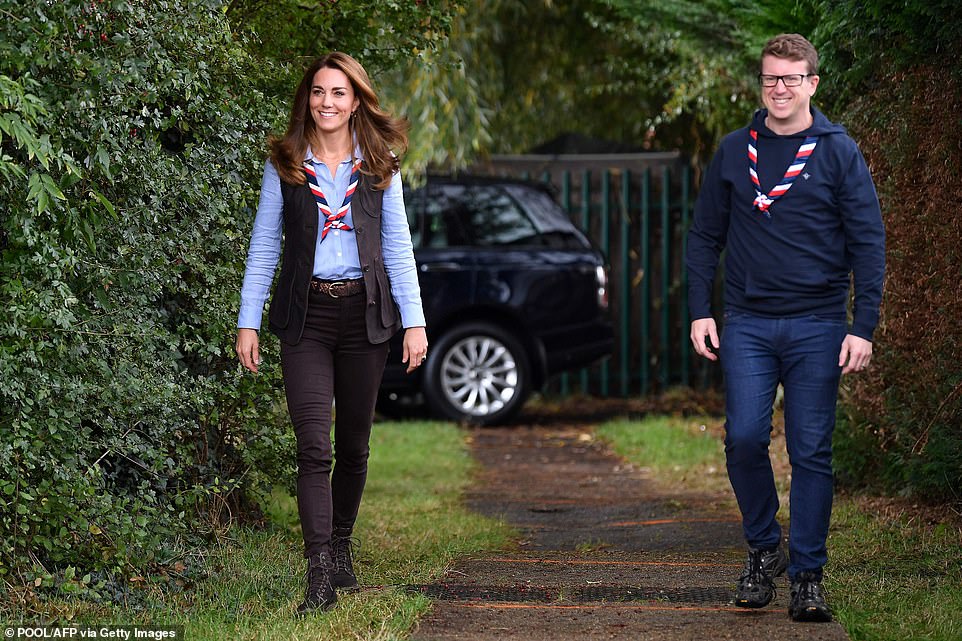 The Duchess of Cambridge re-wore a favourite pair of Massimo Dutti jeans for the outing in Northolt, west London, today 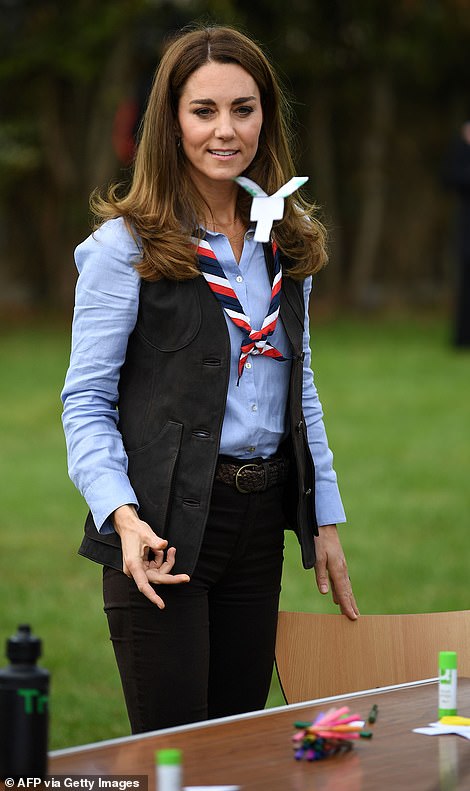 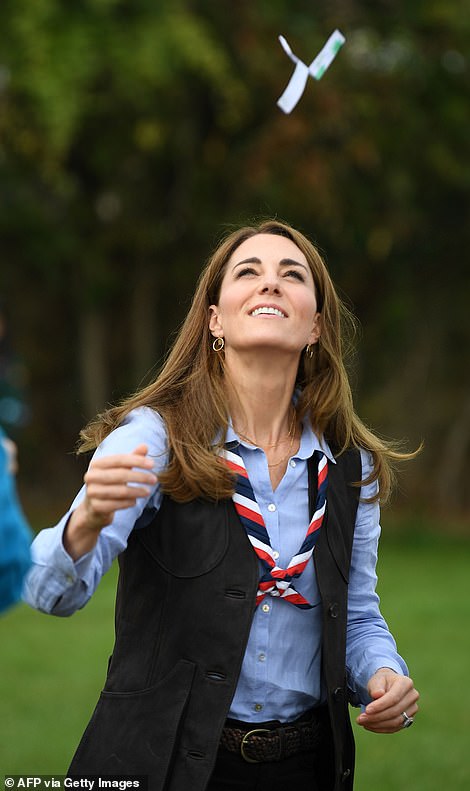 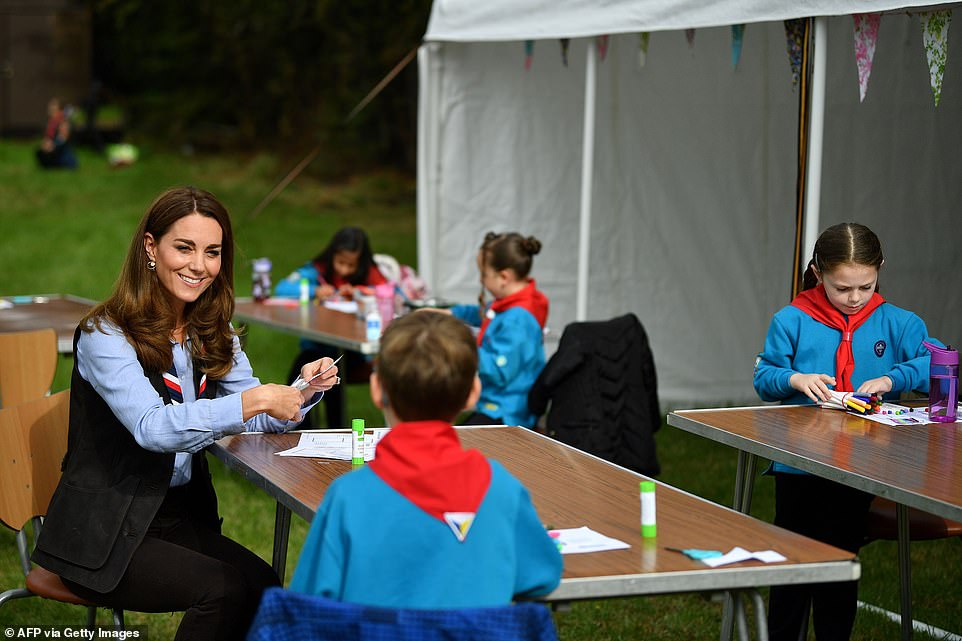 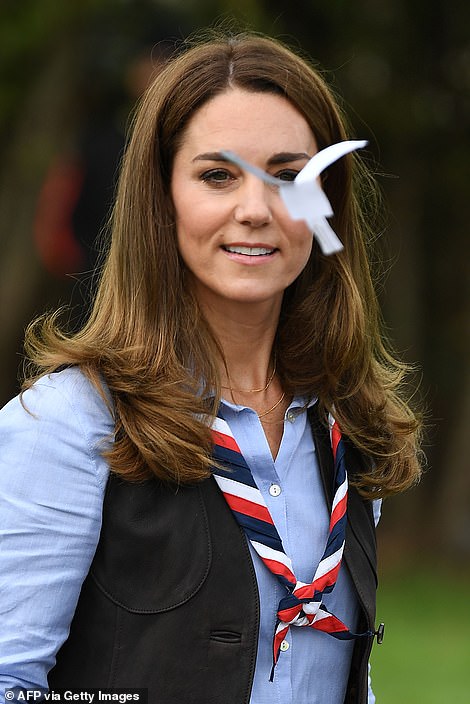 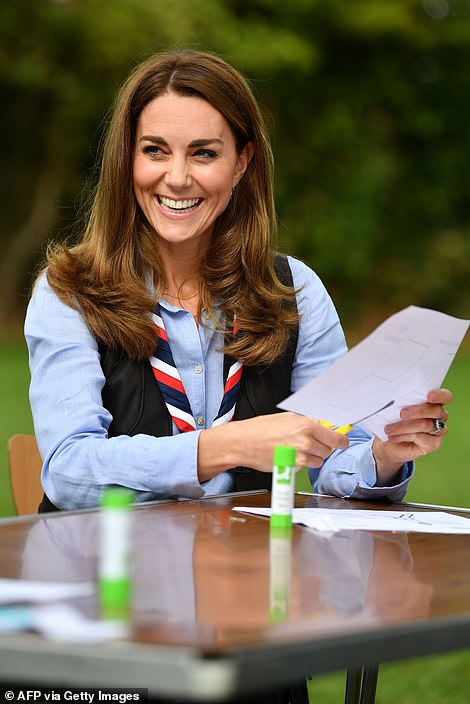 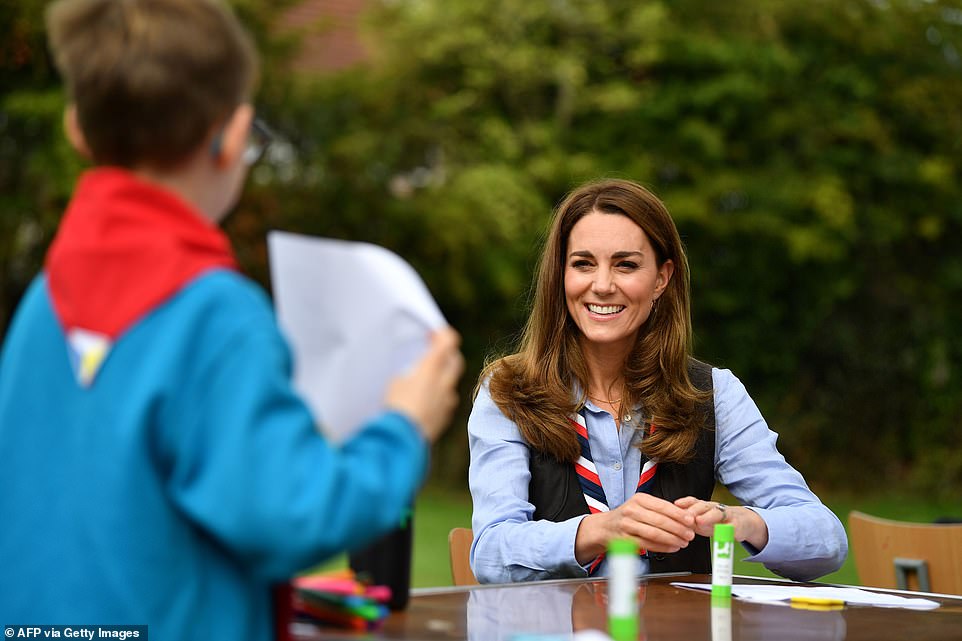 Look what I’ve done! The Duchess of Cambridge smiled as an excited young schoolboy showed her what he had made

The royal was careful to maintain social distancing from other members of the group but the Beavers and Cubs all looked delighted to speak to their royal visitor.

Kate also spent time organisation’s volunteers for supporting more than half a million young people during lockdown. She heard how the association adapted during the pandemic when sessions went online as part of #TheGreatIndoors campaign.

She also met parents and carers of young people who have been supported by the organisation.

The Duchess was presented with the Silver Wolf Award, the highest award made by The Scout Association which the Duke of Kent also holds. 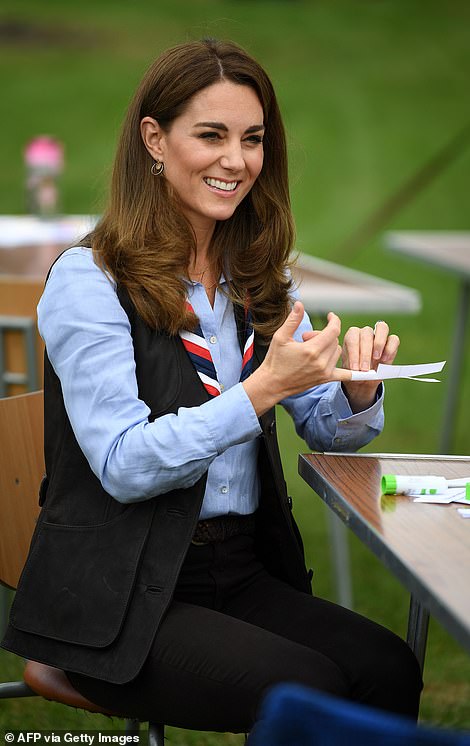 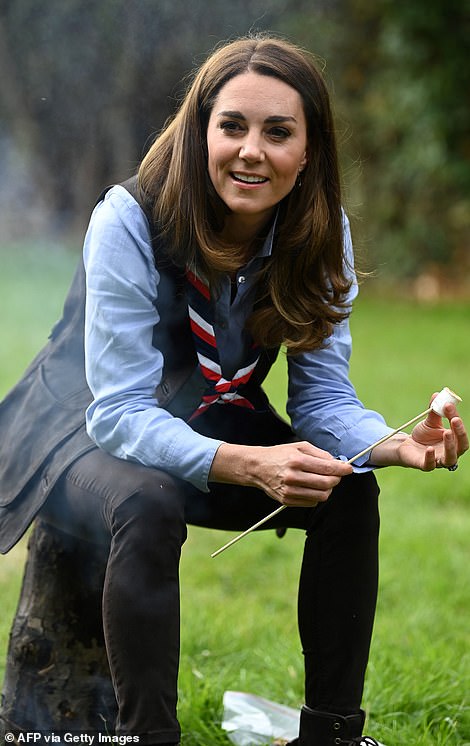 Spot of trouble: The Duchess of Cambridge appeared to get her finger stuck (left). Right, Kate by the campfire 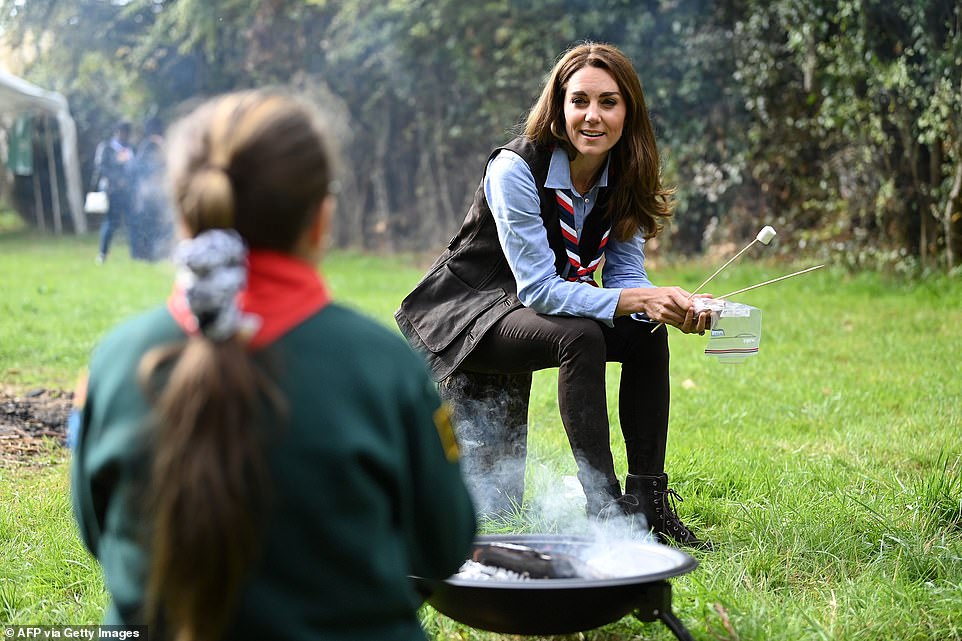 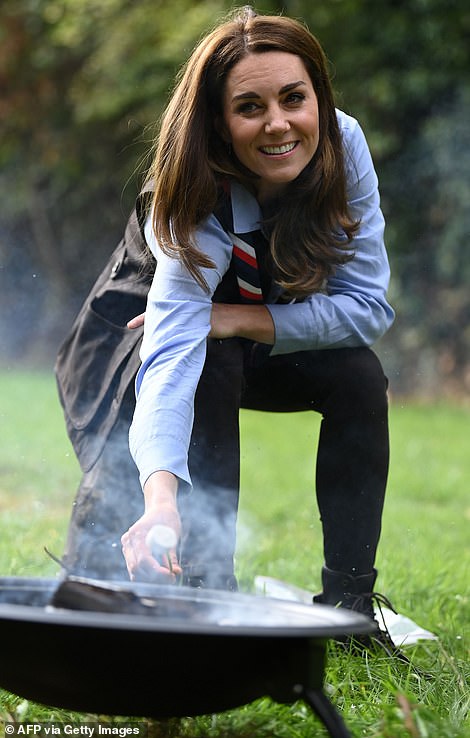 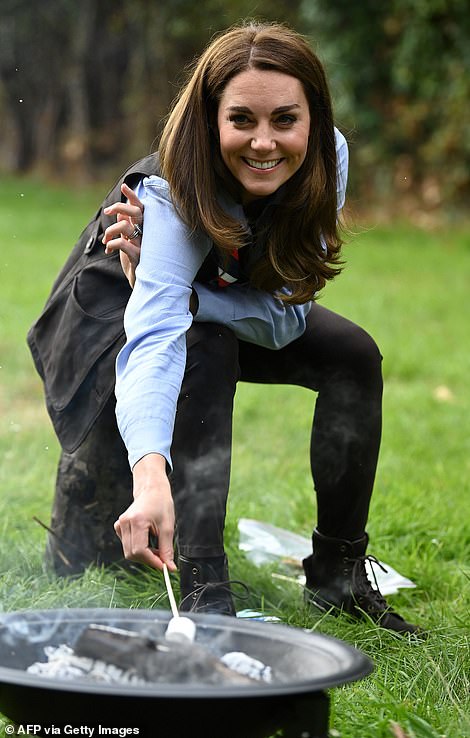 Kate, who enjoys doing outdoor activities with her own children, held her marshmallow over the campfire 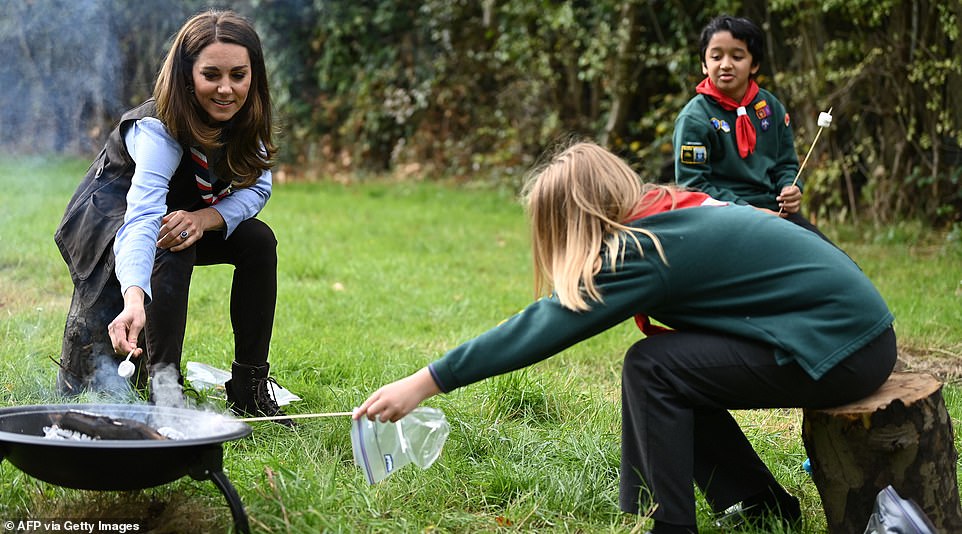 Kate Middleton, 38, dressed down in jeans, a gilet and practical boots to meet Cub and Beaver Scouts in Northholt, west London, today. The Duchess joined the children to toast marshmallows on a fire pit (pictured)

The Duke of Kent welcomed Kate to the role, saying: ‘The Scouts’ ethos of dedication, inclusivity and lending a helping hand wherever one is needed resonates across the generations and, as such, I am delighted to welcome the Duchess of Cambridge as joint president, and to work together to continue that legacy.’

Kate was previously a volunteer with a Cub Scout pack when she and the Duke of Cambridge lived in Anglesey, North Wales.

She has carried out numerous visits to Scout groups over the years, including joining Cubs in North Wootton, near King’s Lynn in Norfolk, in 2016 to celebrate 100 years of the youth movement and visiting the Scouts’ headquarters in Gilwell Park in Essex in 2019.

This year, Scout groups across the UK have carried out more than 10,000 acts of kindness by sending cards and greetings to care home residents. The Queen is patron of The Scout Association. 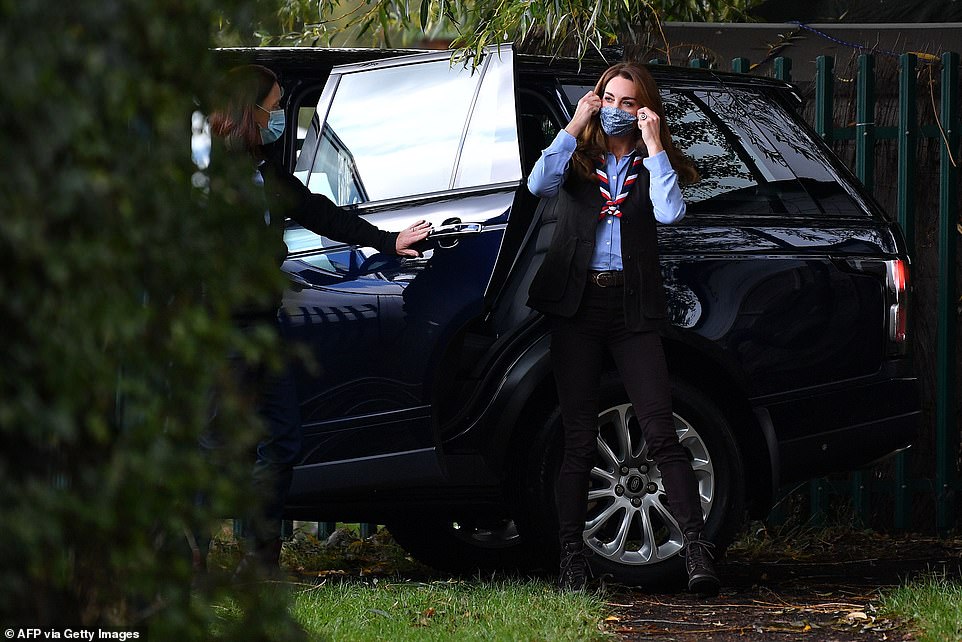 Unmasked: The Duchess of Cambridge removed her face covering as she stepped out of her car at the engagement