The Duchess of Cambridge was left delighted after a little girl introduced herself as a ‘princess’ during a video call about the ‘lifeline’ provided by a baby bank that has become a vital service for parents during the pandemic.

Kate, 39, who is based at her Norfolk home Anmer Hall, highlighted the emotional as well as practical support mothers have received from London-based charity Little Village, which provides clothes, toys and equipment for babies and children up to the age of five.

During a video call chat with the charity’s clients on Tuesday, three-year-old Isla upstaged her mother Vicky Jones by saying hello to the duchess and telling her ‘I’m a princess today’.

Ms Jones described how the charity’s volunteers welcomed her like a friend and she did not ‘feel judged’ when she walked through the door.

During a video call chat with the charity’s clients on Tuesday, three-year-old Isla (pictured right with her mother) upstaged her mother Vicky Jones by saying hello to the duchess and telling her ‘I’m a princess today’

The duchess, dressed in a £125 white jumper by L.K. Bennett, said: ‘It must be such a lifeline to you to have a support network like this, not only for you but also for your daughter as well.

‘Because, you know, looking after yourself as a mum is just as important and it’s (great) Vicky that you’ve got the supportive Little Village for the practical things but also the emotional things as well… help you do the best job you possibly can.’

Ms Jones had introduced her daughter after saying she ‘entertains me to keep me happy’ and ‘I’m surprised she’s sitting quietly at the minute’.

Ms Jones said her midwife recommended Little Village after her apprehension at becoming a single parent: ‘I didn’t know what I was going to do, where I was going to go. I was thinking like “it’s my first child, I’m so scared”.’ 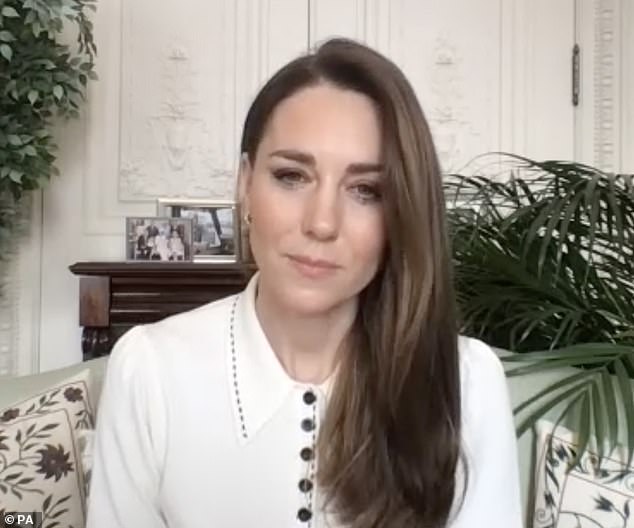 Kate (pictured), 39, who is based at her Norfolk home Anmer Hall with Prince William and their three children, highlighted the emotional as well as practical support mothers have received from London-based charity Little Village

She said: ‘Literally, the minute I walked in, it was like a huge family unit, it was absolutely amazing, and you didn’t feel judged.’

The mother added: ‘You look around and you think like, we’re all in this same situation, but different circumstances.’

The duchess spoke to Little Village founder Sophia Parker on a separate video call and was told the charity has adapted to the pandemic by retraining their volunteers who have made more than 7,000 calls to families.

Since its launch in 2016, Little Village has supported more than 11,000 children and grown into one of the largest baby banks in the UK.

Ms Parker added: ‘Families simply don’t have enough money to cover the basics so I think it’s really important that we address those needs.

She said the lack of resources some parents were experiencing and the problems associated with lockdown – living in cramped accommodation or not having outside space – meant the charity was seeing the impact this was having ‘on levels of anxiety, of feeling low or feeling depressed and actually feeling very isolated as well’.

Last summer, the duchess brought together nineteen British brands and retailers to donate over 25,000 new items to more than 40 baby banks nationwide, including Little Village, to help support the most vulnerable families in the UK.

During the pandemic demand has increased substantially, with Little Village supporting double the number of children in 2020 than they had the previous year.