Kate Garraway broke her social media silence on Tuesday to respond to a fan who urged her to ‘keep hanging on’ as her husband remains in intensive care.

The Good Morning Britain co-host, 53, has stepped back from all platforms in recent weeks, as her husband Derek Draper remains critically ill after coronavirus caused ‘extraordinary damage’.

Kate replied to a follower’s Tweet who encouraged her to watch a YouTube video of Australian mountaineer Lincoln Hall who explains the stages of unconsciousness he came back from.

Grateful: Kate Garraway broke her social media silence on Tuesday to respond to a fan who urged her to ‘keep hanging on’ as her husband remains in intensive care

The fan had encouraged Kate to watch a video about Hall, who reached the summit of Mount Everest on his second attempt in 2006, miraculously surviving the night at 8,700m on descent, after his family was told he had died.

Kind: Kate replied to a follower’s Tweet who encouraged her to watch a video of mountaineer Lincoln Hall who explains about the stages of unconsciousness he came back from 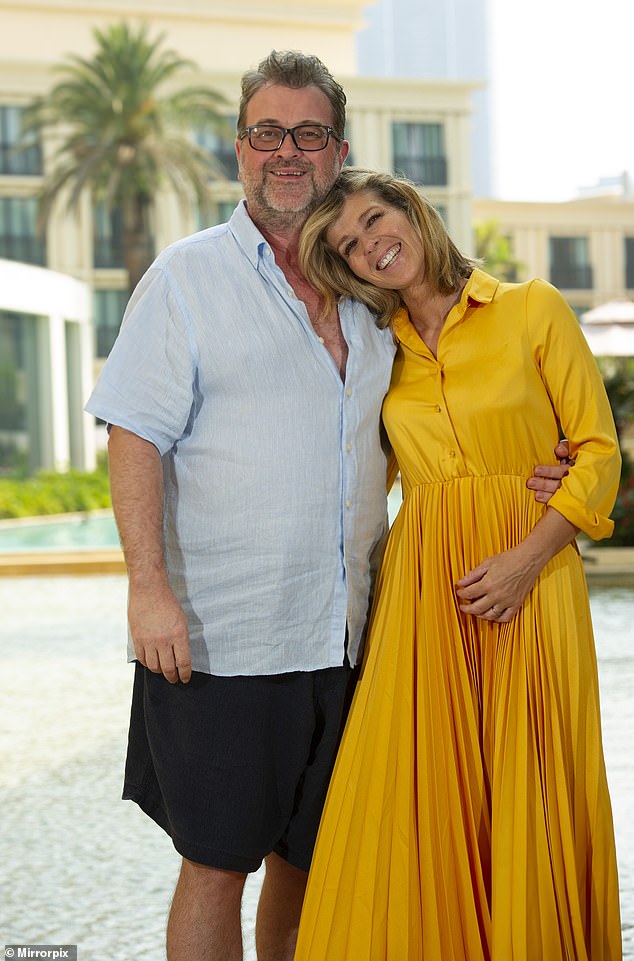 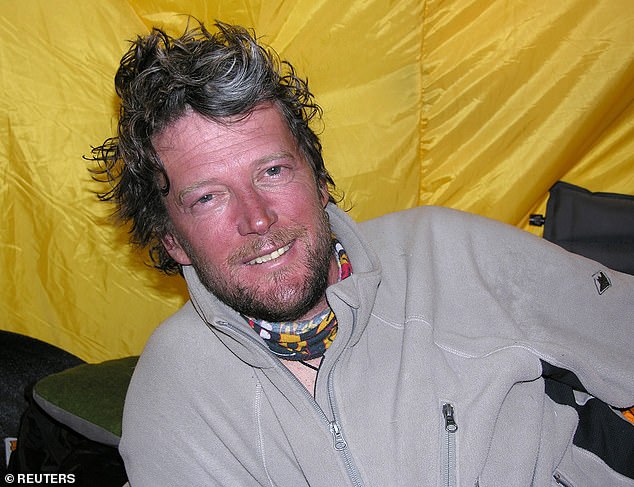 Miracles do happen: The fan had encouraged Kate to watch a video about Lincoln Hall, who survived a night at the summit of Mount Everest after his team had to abandon him

Kate’s husband Derek, 52, has been in a comatose state in intensive care for the past 12 weeks, after contracting coronavirus.

Former lobbyist Derek is now free of COVID-19, but is suffering from serious residual complications.

Kate broke down in tears earlier this month as she revealed Derek thanked her for ‘saving his life’ before he slipped into a coma. 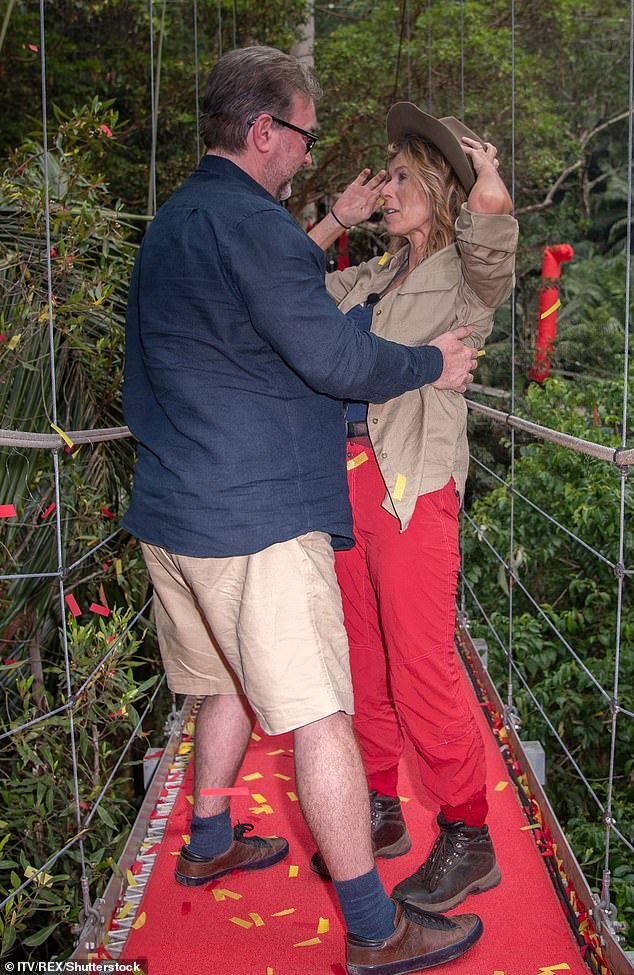 Lovely surprise: The GMB host previously revealed the couple were set to renew their wedding vows after Derek popped the question again after she left the I’m A Celebrity jungle

REVEALED: HOW THE CRUEL LEGACY OF COVID MAY LAST A LIFETIME

Covid-19 could leave survivors with debilitating illnesses that last for years, doctors have warned since the outbreak spiralled out of control.

One leading medic called it ‘this generation’s polio’ – a disease that killed thousands and left a generation with life-long mobility issues.

Patients who spend weeks fighting for life in intensive care can suffer from long-term complications caused by permanent damage to their lungs and liver.

Physiotherapists also warn patients can suffer a loss of mobility, if they are stuck on hospital wards for weeks, or endure flashbacks and emotional distress.

But even patients who endure symptoms so mild they don’t get admitted to hospital are plagued by fatigue, headaches and breathlessness that can linger for weeks.

Several recent studies have highlighted proof Covid-19 causes fibrosis – scarring of the lung tissue that makes it harder for the organs to work.

A research paper published in a Chinese journal in March said ‘pulmonary fibrosis may be one of the major [long-term] complications in Covid-19 patients’.

Evidence is also emerging that the virus may affect the brain, causing seizures and stroke, as well as harming the liver, kidneys, heart and blood vessels.

A paper in the journal JAMA Cardiology in March reported one in five of 416 Covid-19 patients hospitalised in Wuhan, China, had suffered heart damage.

The heart problems are thought to occur as a result of the virus triggering a ‘cytokine storm’, where the immune system overreacts to the infection.

Number 10’s panel of leading scientists – SAGE – called for studies to investigate the lasting effects of the illness.

The presenter became overcome with emotion during a recent instalment of GMB as she admitted she ‘doesn’t know’ if Derek can recover from the ‘extraordinary damage’ COVID-19 has inflicted on his body, and may be in a coma for a year.

Kate said: ‘Well there will be tears, I’ll try to keep them down, he’s still with us, he has fought the most extraordinary battle, the fact that he’s still here and holding on.

‘I am so grateful that he’s still here, and I’ve got the option of praying while others have lost that.

‘He’s very, very sick and as time goes on, it’s a virus, it’s like a computer virus, the doctors manage one but there seems to be a flicker of hope and other things emerge and they’re fighting that.

‘It has affected him from the top of his head to the tip of his toes.

She added: ‘He is now COVID-free, he has tested negative, the fight with the virus is over but it’s wreaked extraordinary damage on his body and we don’t know if he can recover from that.’ 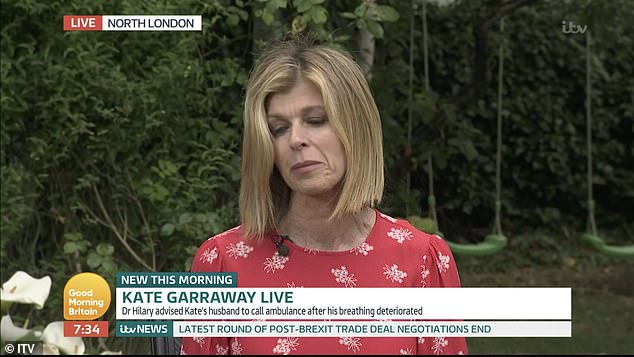 Brave: During a recent appearance on This Morning, Kate broke down in tears as she revealed critically-ill husband Derek thanked her for ‘saving his life’ before he slipped into a coma

Kate spoke for the first time about Derek’s initial admission to hospital in March, revealing the last thing he said to her before he was put in a medically-induced coma, was ‘I love you, you saved my life.’

She said: ‘In that first week it looked like he was rallying. But then he was very bad, he couldn’t really speak to me, he could shout things to me on speakerphone.

‘He was begging me, he said “I can’t take this, I feel like I’m suffocating”, he said “please let them put me in a coma” and they didn’t want to do that. On Sunday they said “we’re going to put him in a coma as overnight we think we have to do that.”‘ 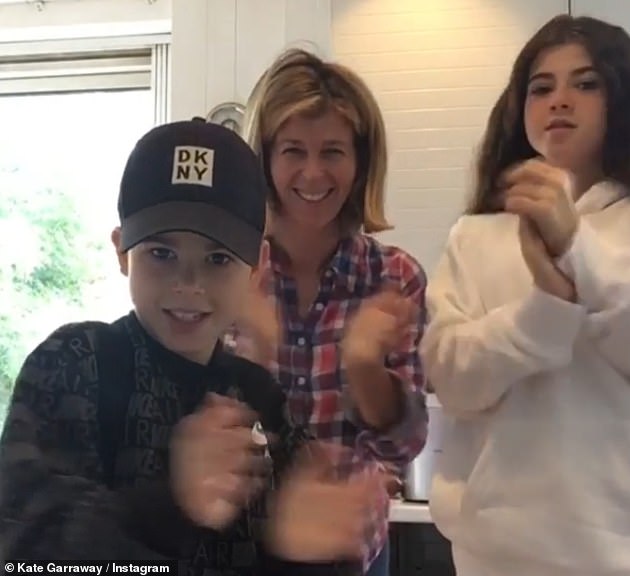 Struggling: The GMB presenter has talked about how her children (pictured, Billy with sister Darcey, 14) are struggling while missing their father

‘He said: “I love you, I’m sorry I have to leave you, you’ve saved my life”. I think he thought I had asked the doctors to put in him in a coma. He said “being married to you, the children, you saved my life”.’

Derek has previously credited Kate for saving him from depression which started during his career as a political advisor and led to a nervous breakdown and a stint in The Priory in the late 1990s.

Kate and Derek have been married for 14 years, with the former lobbyist cheering his wife on for the duration of her stint on I’m A Celebrity last year. 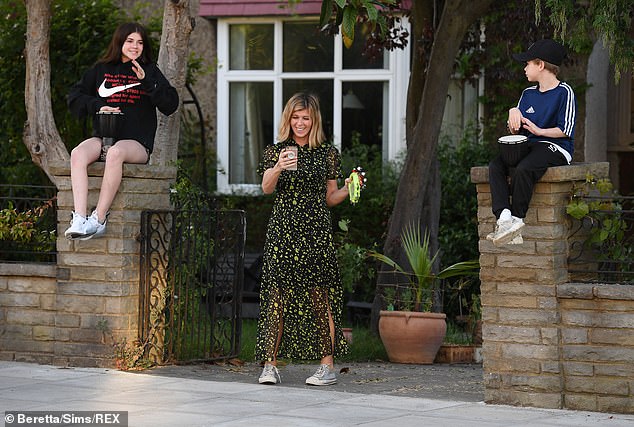 Family: The television star admitted at times she feels paralysed with fear, but vows to stay strong for their two children (pictured with Darcey and Billy last month)