They’ve been the talk of Paris Fashion Week after stepping out in an array of couples outfits.

The rapper, 44, joined his new actress love, 31, as they posed for pictures while clad in leather ensembles that looked to have been inspired by The Matrix film series. 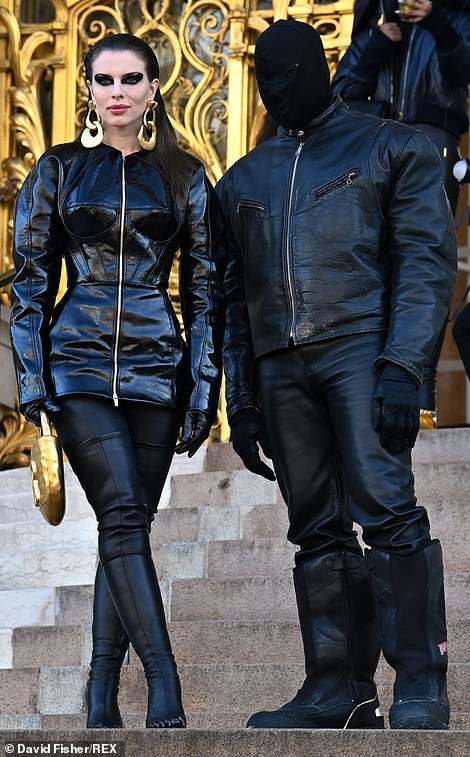 The FourFiveSeconds hitmaker added to the look with a leather jacket and trousers paired with chunky knee high boots and gloves.

While usually impeccably turned out, the style guru appeared to have had a slight mishap on his way to the venue, as his jacket bore a large stain next to the zipper. 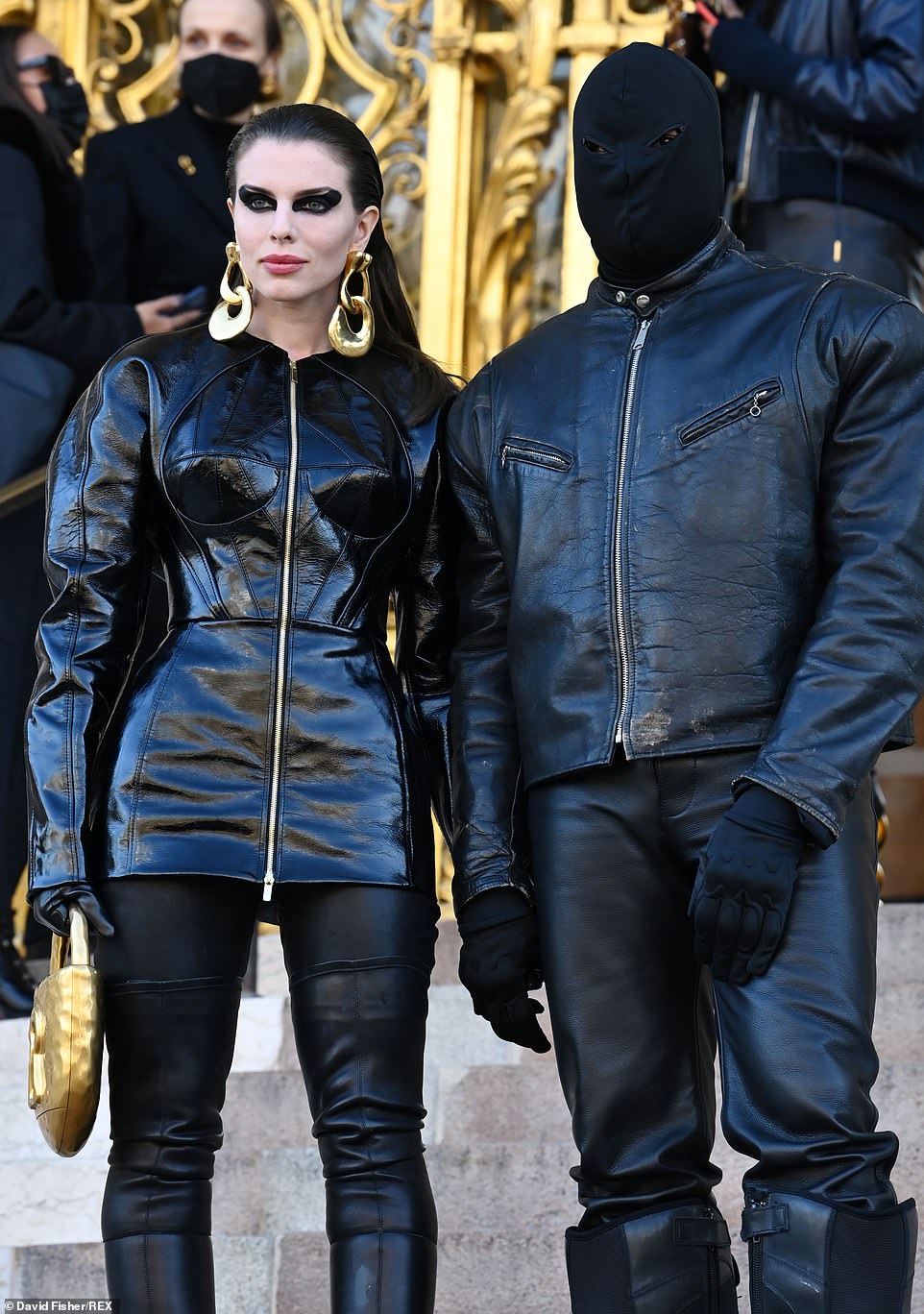 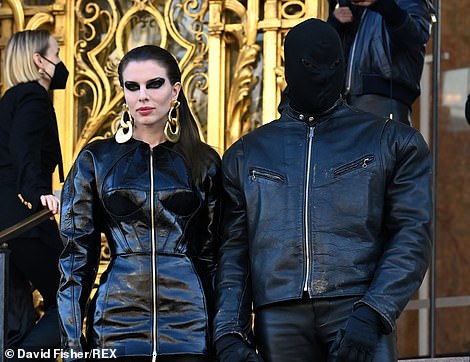 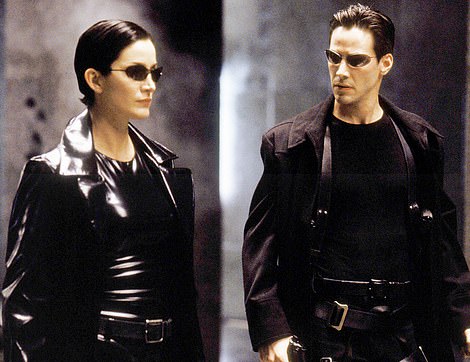 When you know you Neo: The rapper, 44, joined his new actress love, 31, as they posed for pictures while clad in leather ensembles that looked to have been inspired by The Matrix film series (pictured right: Carrie-Anne Moss & Keanu Reeves in The Matrix)

At his side was Julia, who wowed in a peplum leather jacket with a cone corset that emulated the iconic Jean Paul Gaultier cone corset as worn by Madonna on her Who’s That Girl tour in 1987.

She added to the glamour with a pair of towering thigh high heels that boosted her modelesque frame.

Injecting some colour, the Uncut Gems actress donned a chunky gold handbag and giant hooped earrings, while she framed her eyes with a thick lining of kohl. 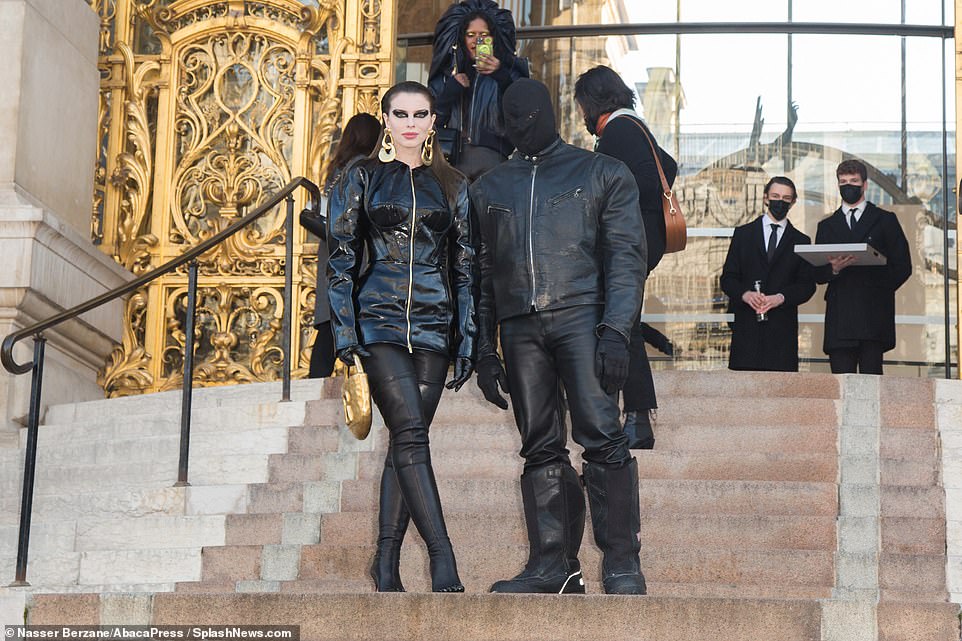 Working it: The pair posed up a storm as they made a stylish arrival into the building 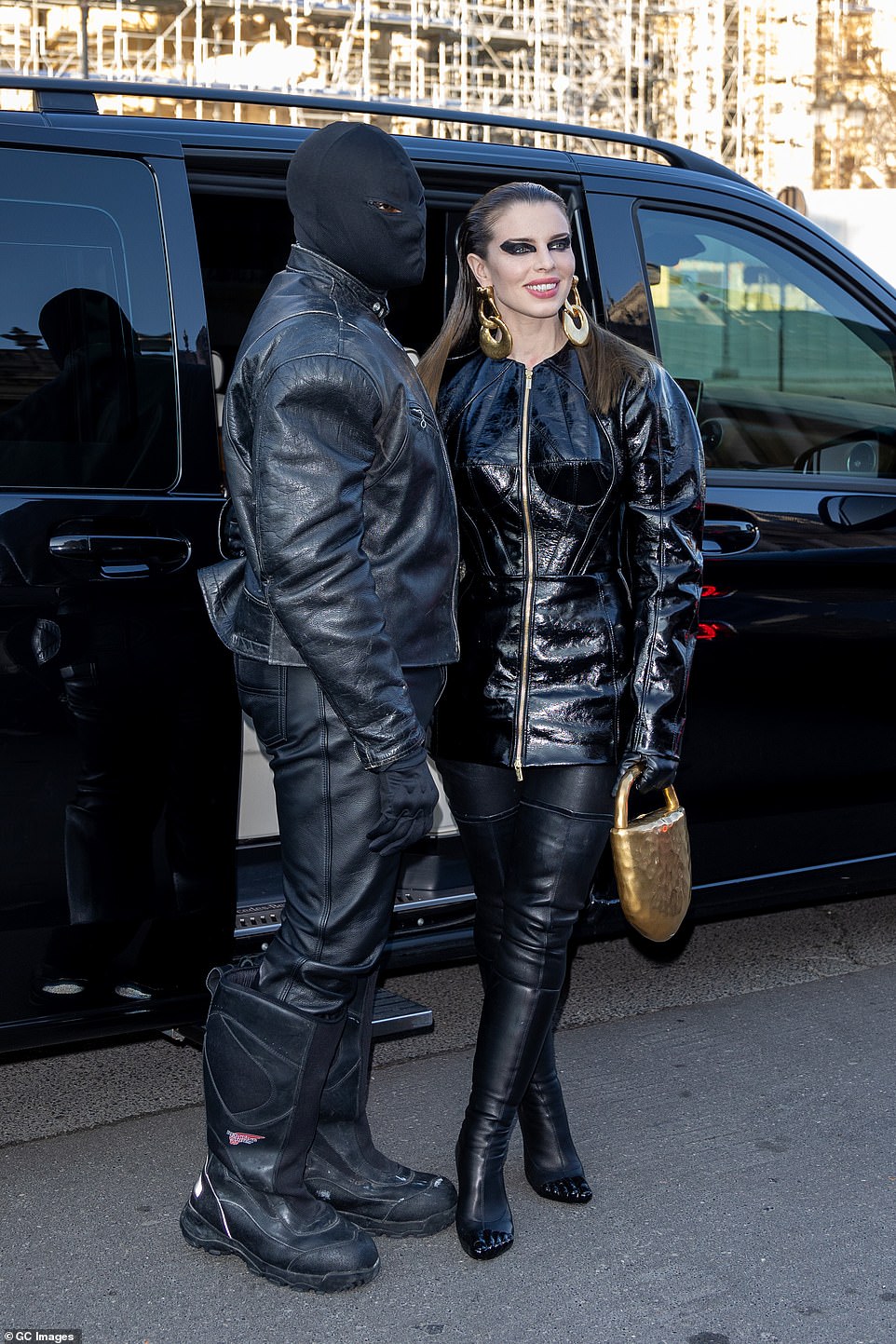 Feeling hot hot hot? The FourFiveSeconds hitmaker added to the look with a leather jacket and trousers paired with chunky knee high boots and gloves

Julia recently discussed her romance in a chat with Interview Magazine, as she disclosed that they had an ‘instant connection’ when the first met in Miami on New Year’s Eve.

She added on her Forbidden Fruits podcast: ‘It’s funny cause I’m getting all of this attention, but I really couldn’t care,’ The Uncut Gems star said of her whirlwind romance with the rapper that spans about three weeks.

‘Watch my movie, read my book. That is more thrilling to me now than eyes on me. I couldn’t care less.’ 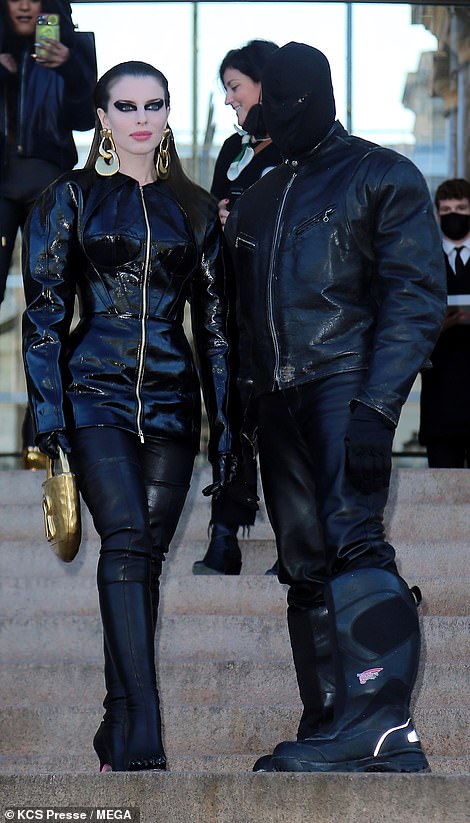 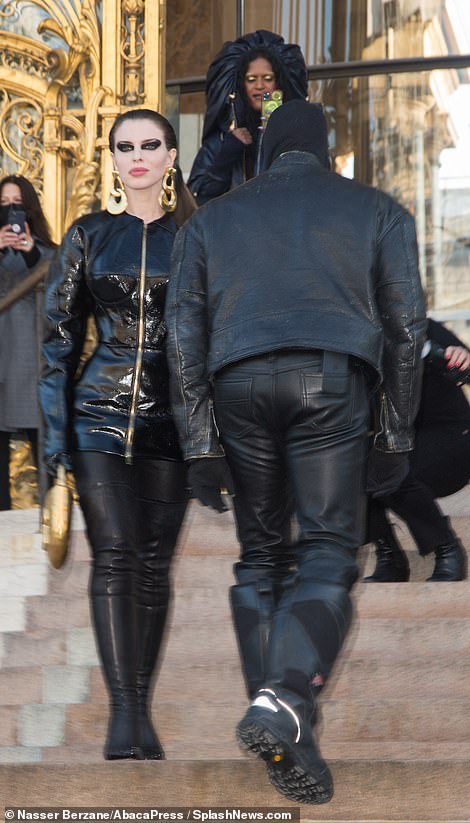 Snap happy: The pair turned the stairs outside the building into their own personal runway ahead of watching the show 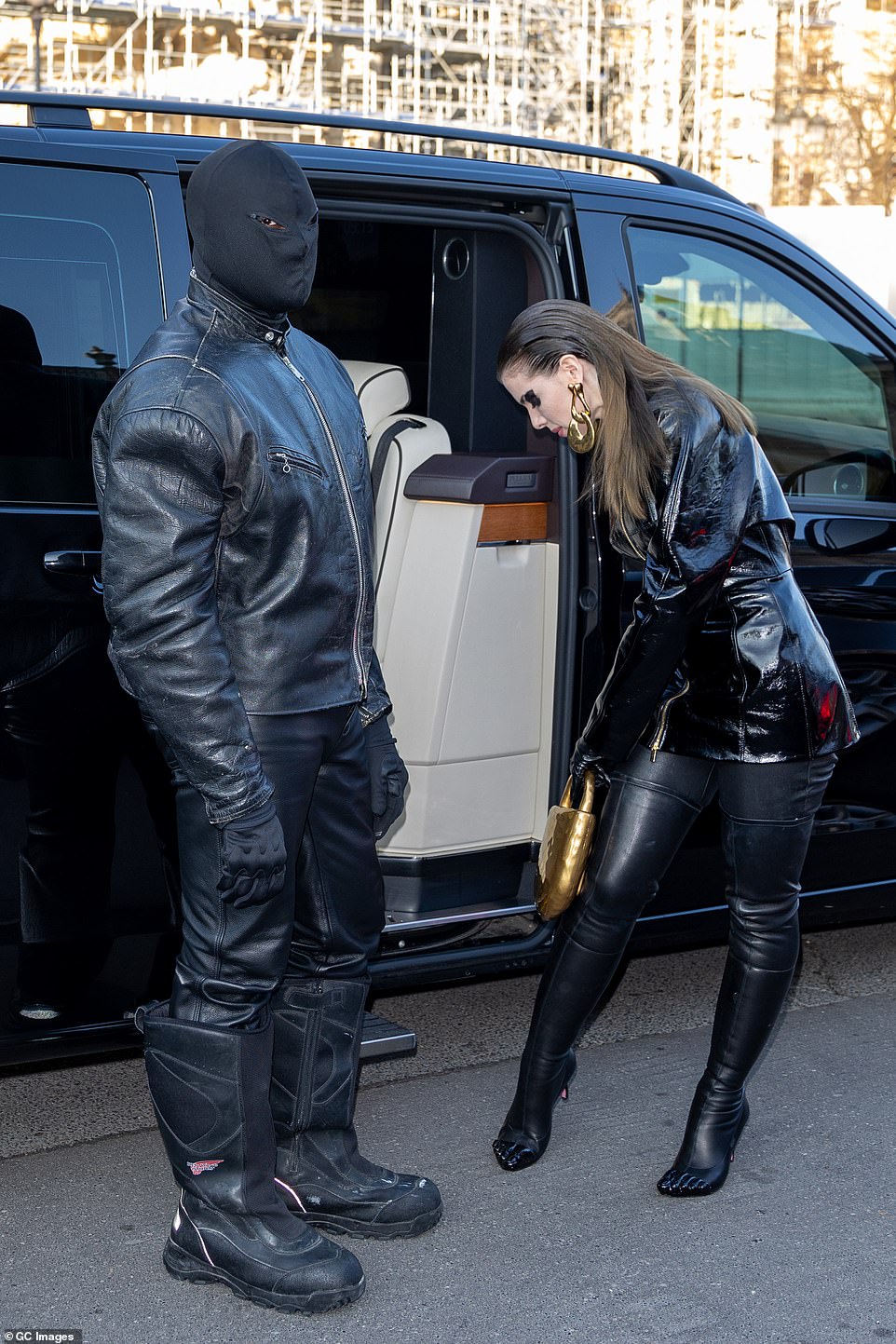 All about the accessories: Injecting some colour, the Uncut Gems actress donned a chunky gold handbag and giant hooped earrings, while she framed her eyes with a thick lining of kohl 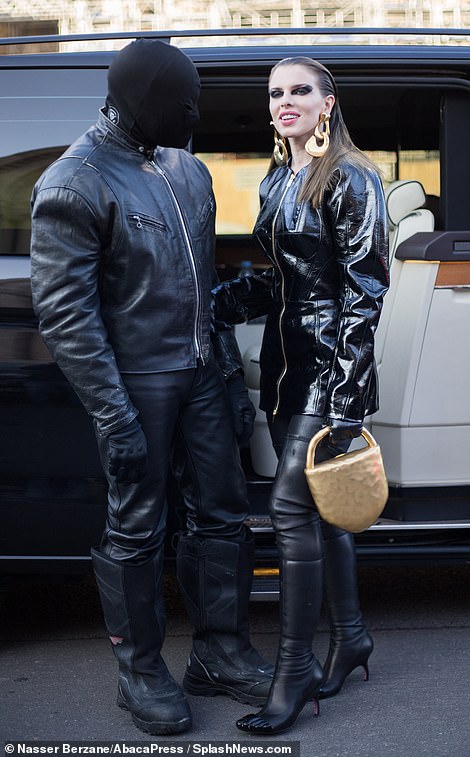 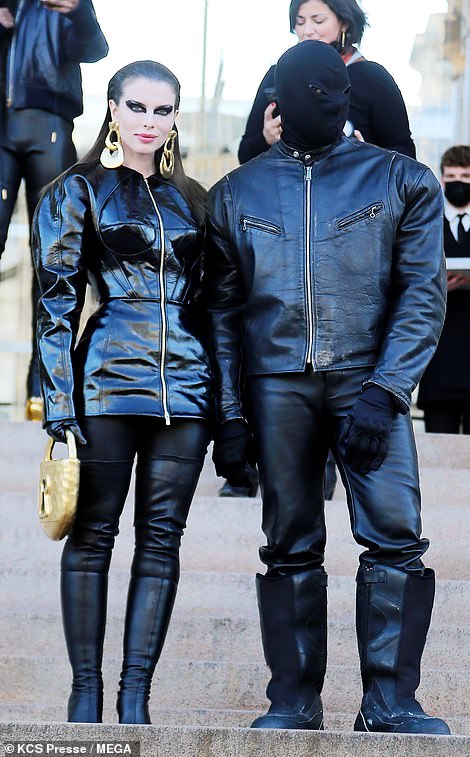 Posing up a storm: The pair snuggled up to one another as they commanded attention outside the venue 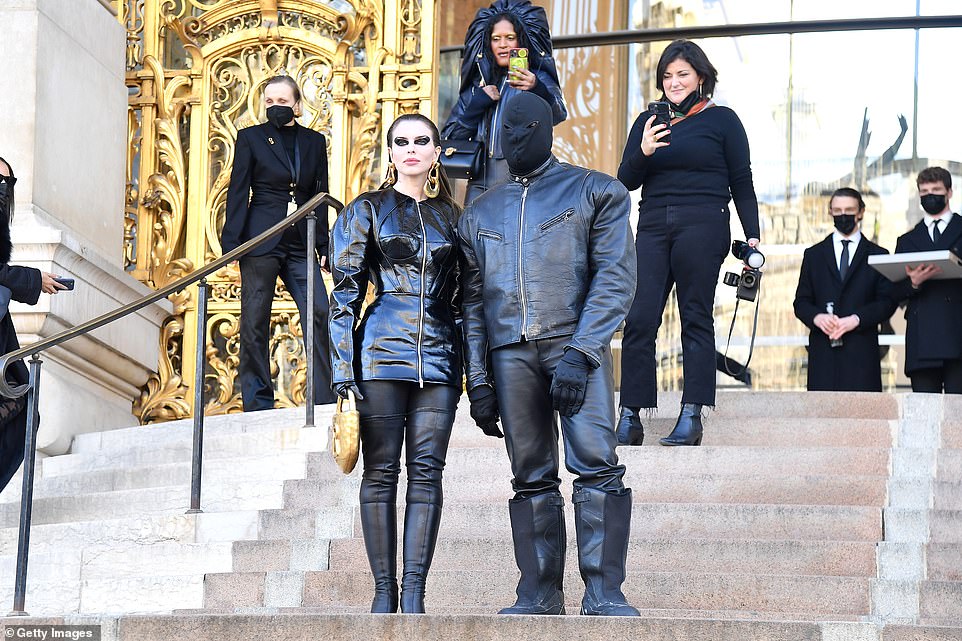 A sight for sore eyes: Julie and Kanye ensured all eyes would be on them as they posed for snaps on the stairs 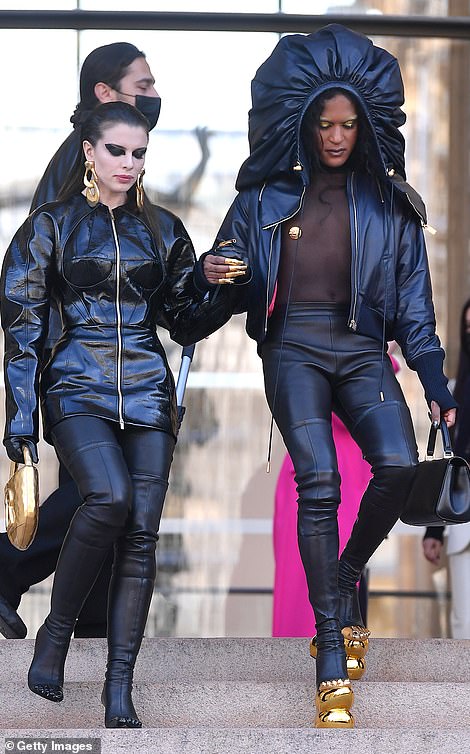 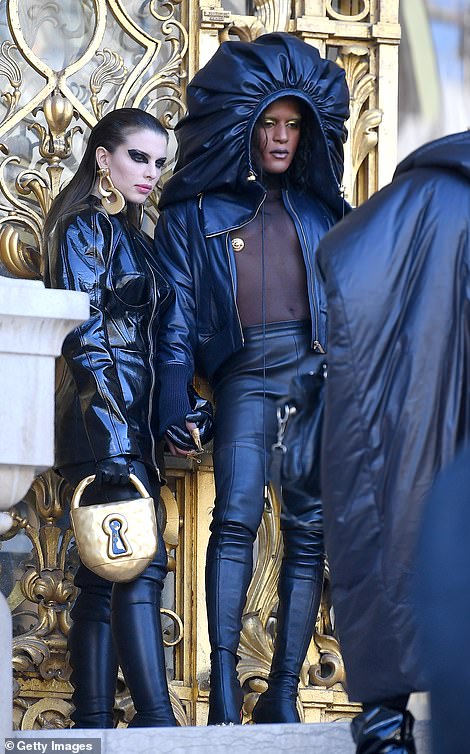 Hood have thought it: Julia was seen walking hand in hand with model Richie Shazam, who opted for a quirky jacket featuring an oversized hood that he paired with leather trousers 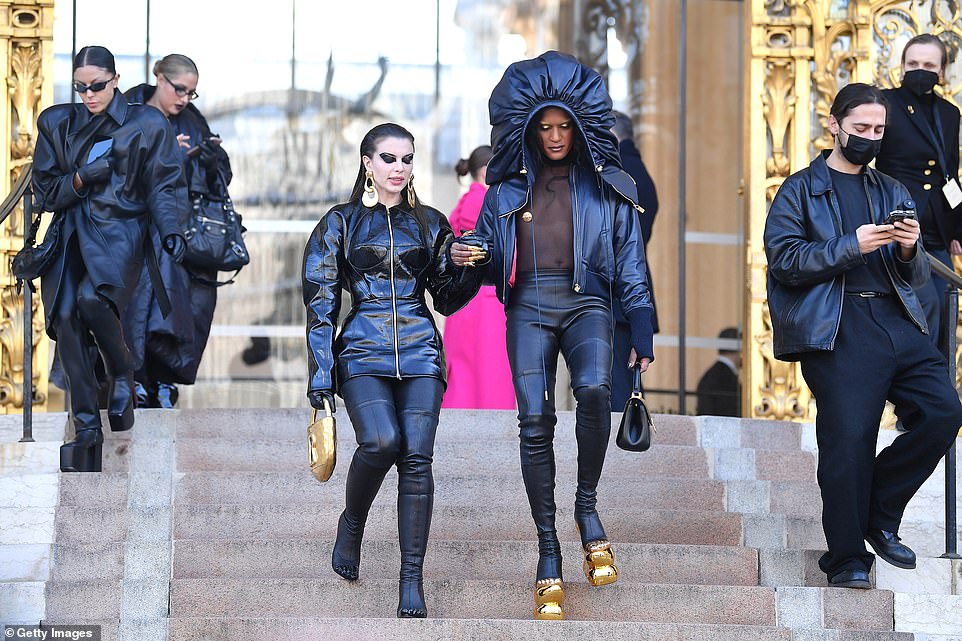 Bold: Julia and Richie certainly stood out from the crowd with their unique ensembles

While their relationship appears to already be getting serious, the Italian-American actress and model maintains she’s focused on creating art and ‘putting things into the world.’

Julia went on to share some of the details behind a recent dinner that she and a few high-profile celebrities attended, including Madonna and former Tampa Bay Buccaneers star wide receiver Antonio Brown.

‘There was a lot going on. Madonna was there. I was actually supposed to be at dinner for just Madonna and I,’ she shared, adding, that ‘all of these other celebs crashed’ the party.

Julia also posted images from the star-studded evening on her Instagram Story on Tuesday that included video of her snuggling up with Kanye. 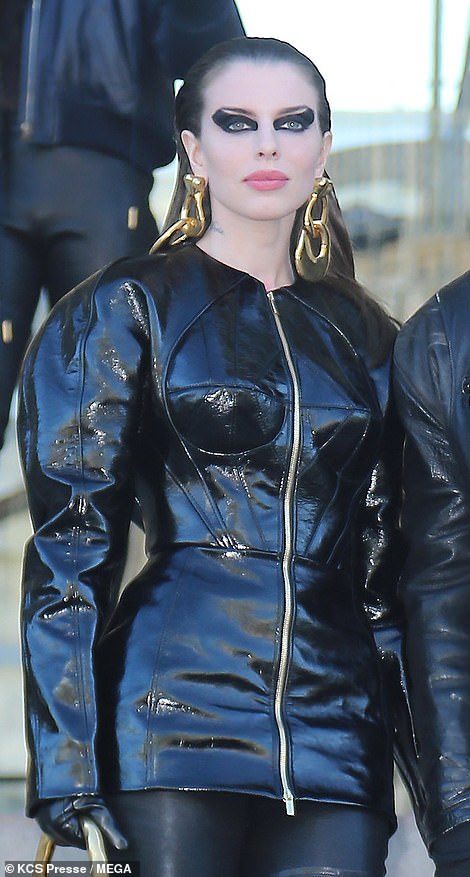 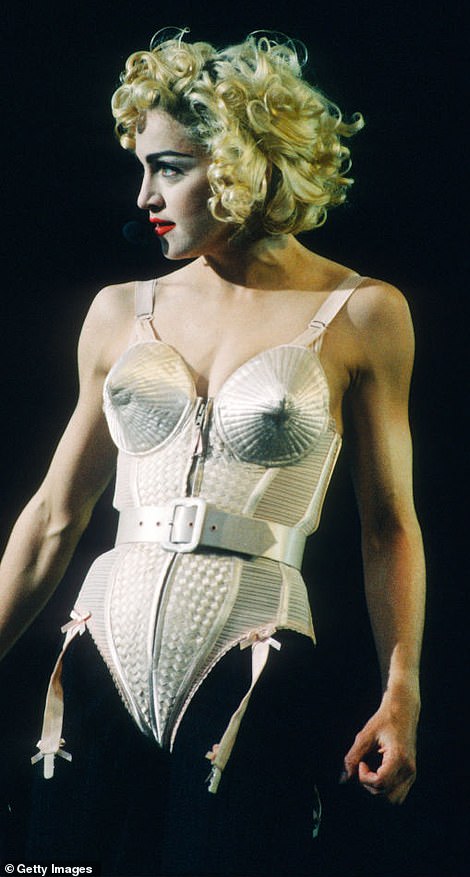 Inspired: Julia emulated the iconic Jean Paul Gaultier cone corset as worn by Madonna on her Who’s That Girl tour 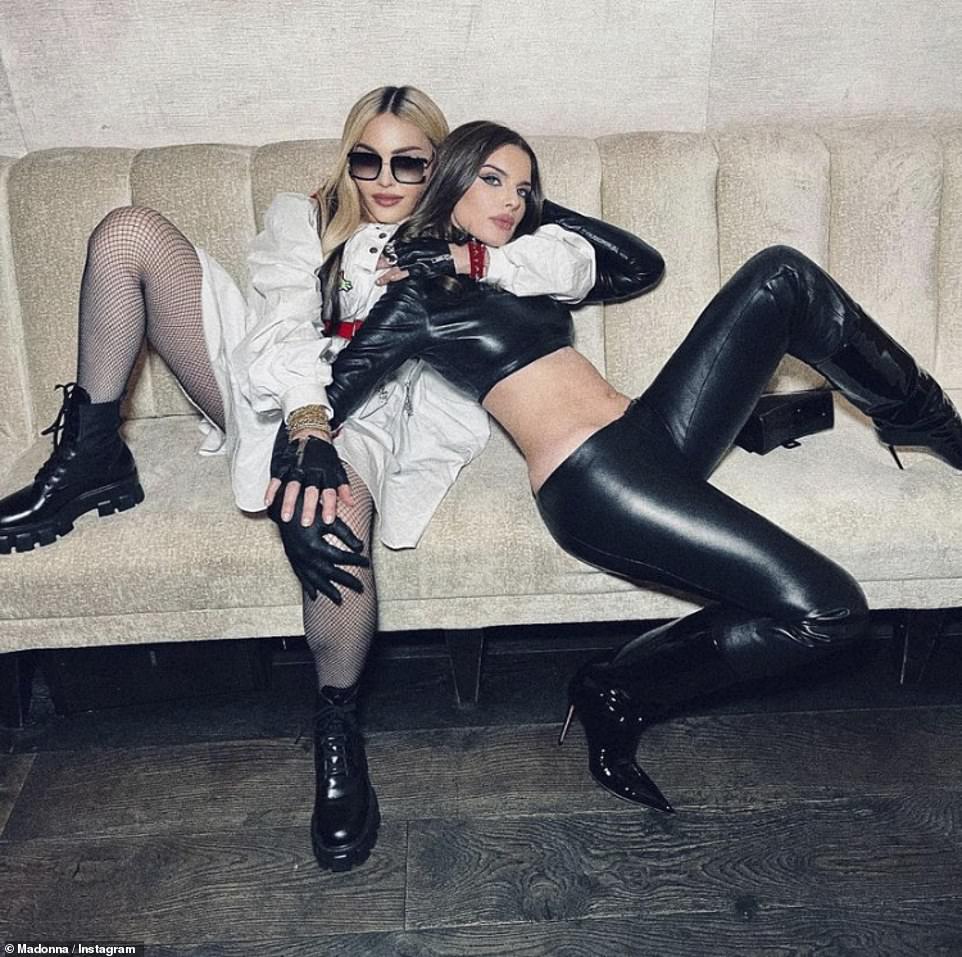 Working together: Madonna and Julia enjoyed a night out together earlier in the month, and now Julia has been taking inspiration from the singer’s iconic looks 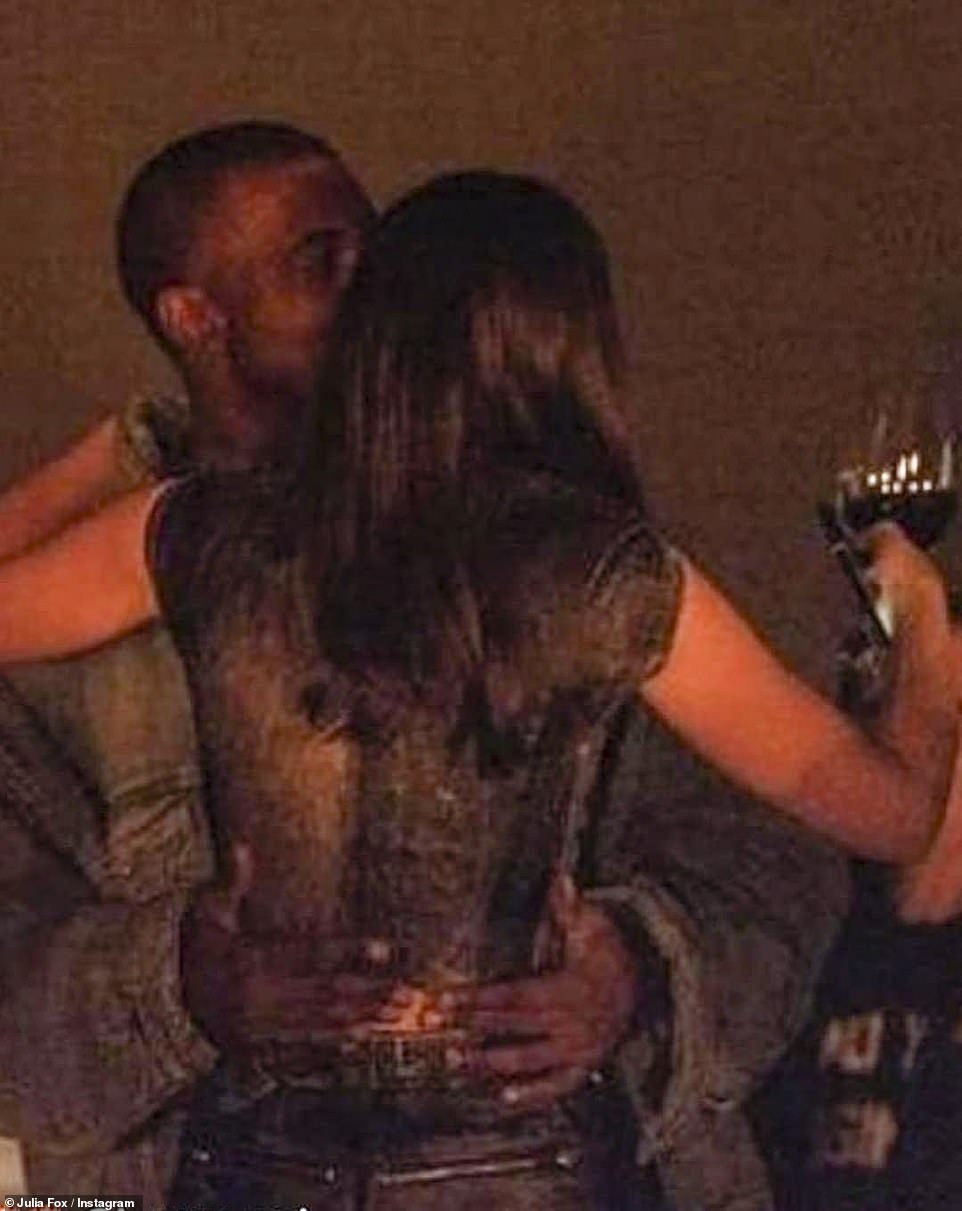 Celebrity dinner: Julia recently shared some of the details behind a recent dinner that she and a few high-profile celebrities attended 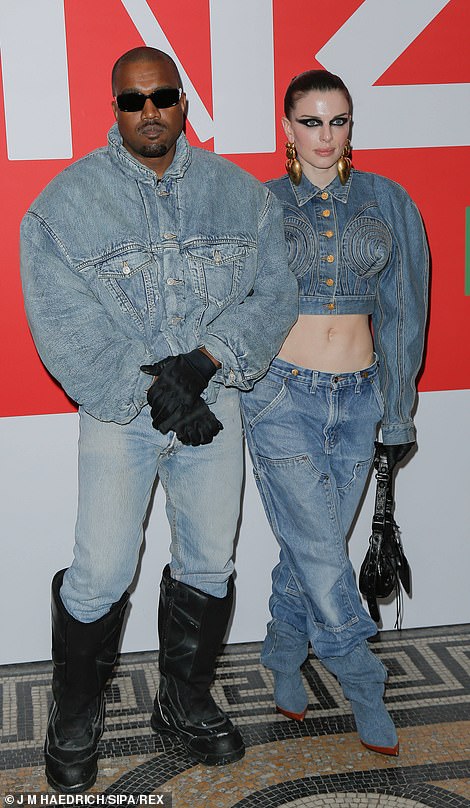 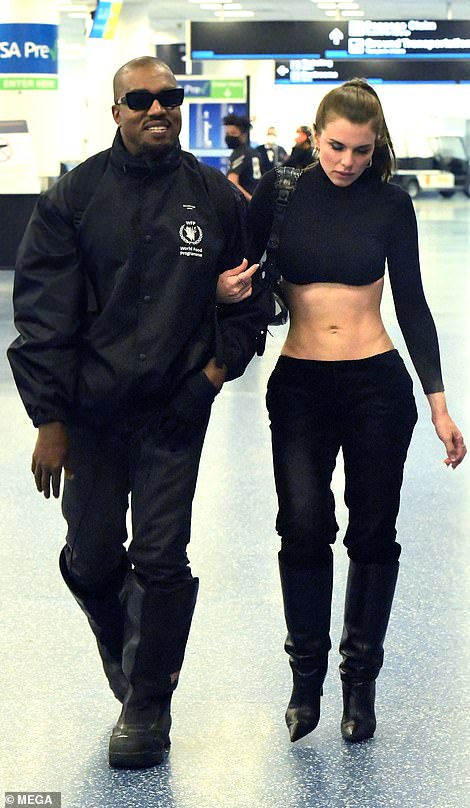 Twinning: Kanye and Julia have been the talk of the week with their matching ensembles (pictured left at the Kenzo show on Sunday and right at Miami International Airport on Saturday)

A clip of the pair showed them sharing a few kisses during an outing that appears to be the same night they partied with Madonna and retired world champion boxer Floyd Mayweather, among others.

‘They all had dinner in the private dining room,’ a source revealed, before adding, ‘They came separately but just ended up having dinner together. Kanye and Julia wouldn’t leave each other’s sides.’

The outing comes after Kanye engaged in some public drama with his estranged wife Kim Kardashian, with whom he shares his four kids.

He gave an interview to Hollywood Unlocked accusing her security of blocking him from entering her home recently.

Striking: Also at the Schiaparelli show was Pixie Lott who wowed in a black blazer adorned with a glittering gold padlock design that she paired with tapered trousers 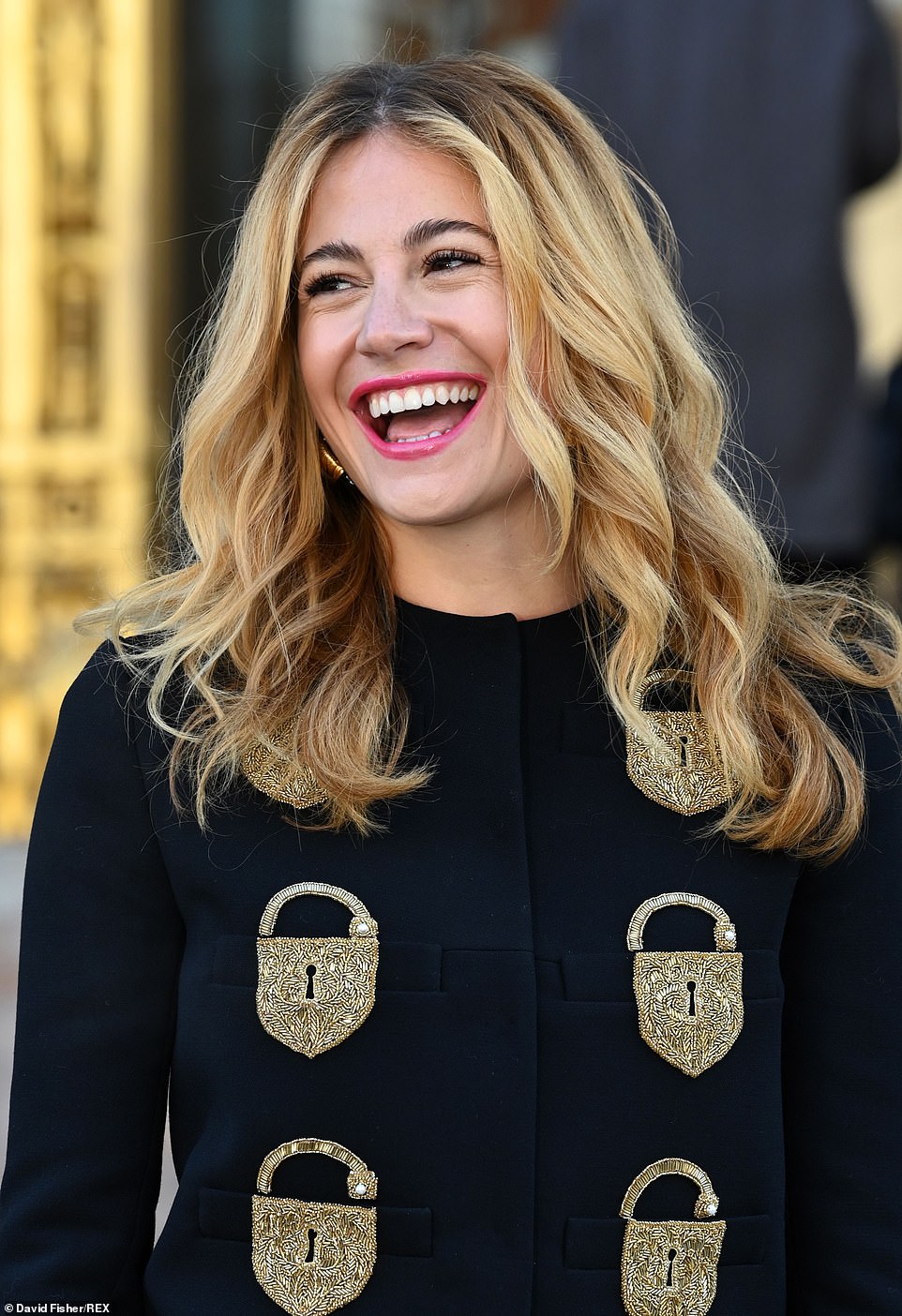 Blonde bombshell: The Mama Do hitmaker wore her glossy golden locks in loose curls and added a pop of pink with her lipstick

A source close to the situation assured DailyMail.com that ‘security didn’t stop him from seeing the kids, picking them up or dropping them off’.

The insider added: ‘He just can no longer walk inside her home without her permission. She has a right to privacy and is trying to set healthy boundaries.’

Kim’s boundaries, according to the source, ‘became necessary because there have been several incidents where her family, friends and staff have been left upset by his recent unannounced visits’.

Golden girl: Laverne Cox wowed in a fitted black coat that she paired with an eye-catching gold fascinator and quirky cut-away heels 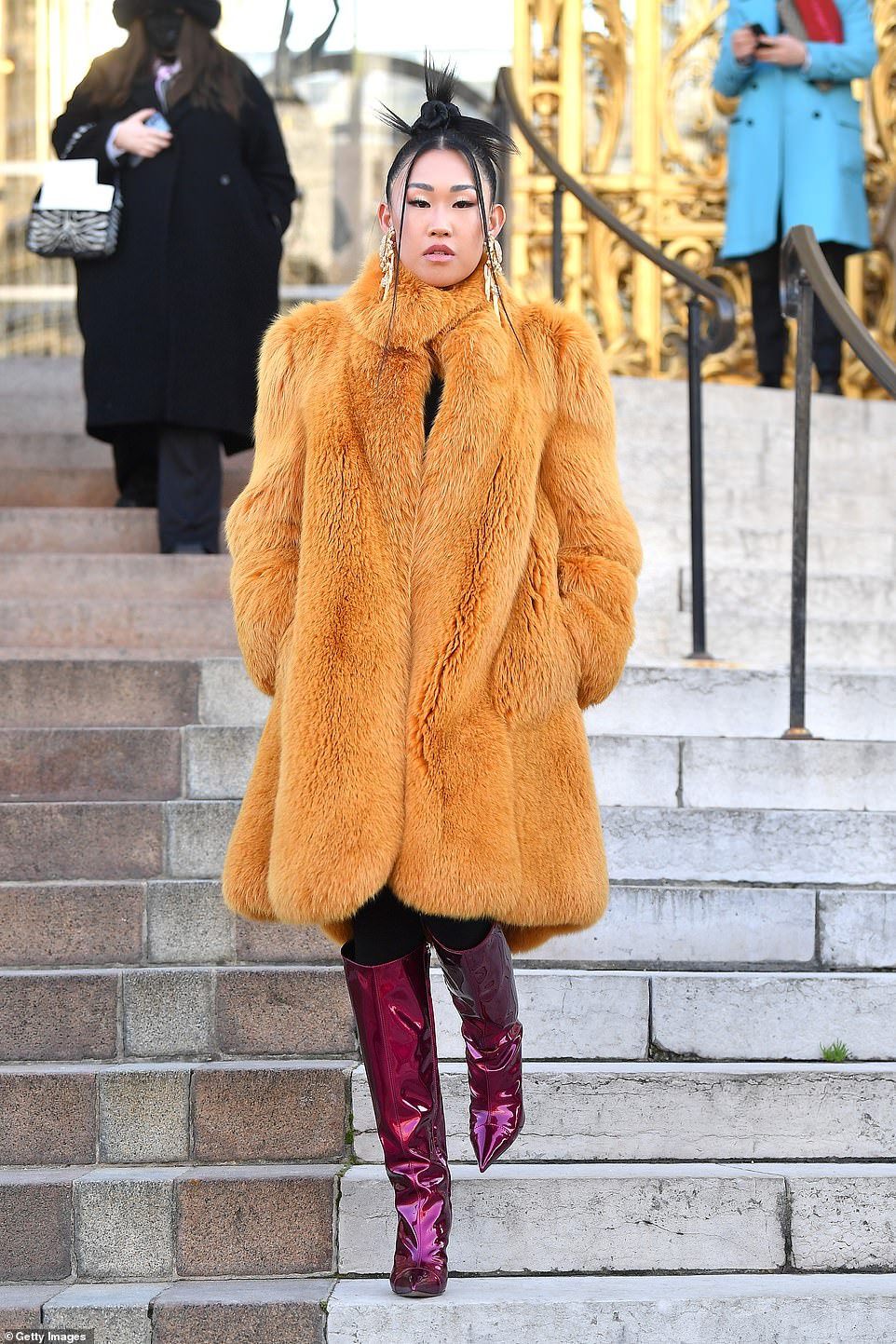 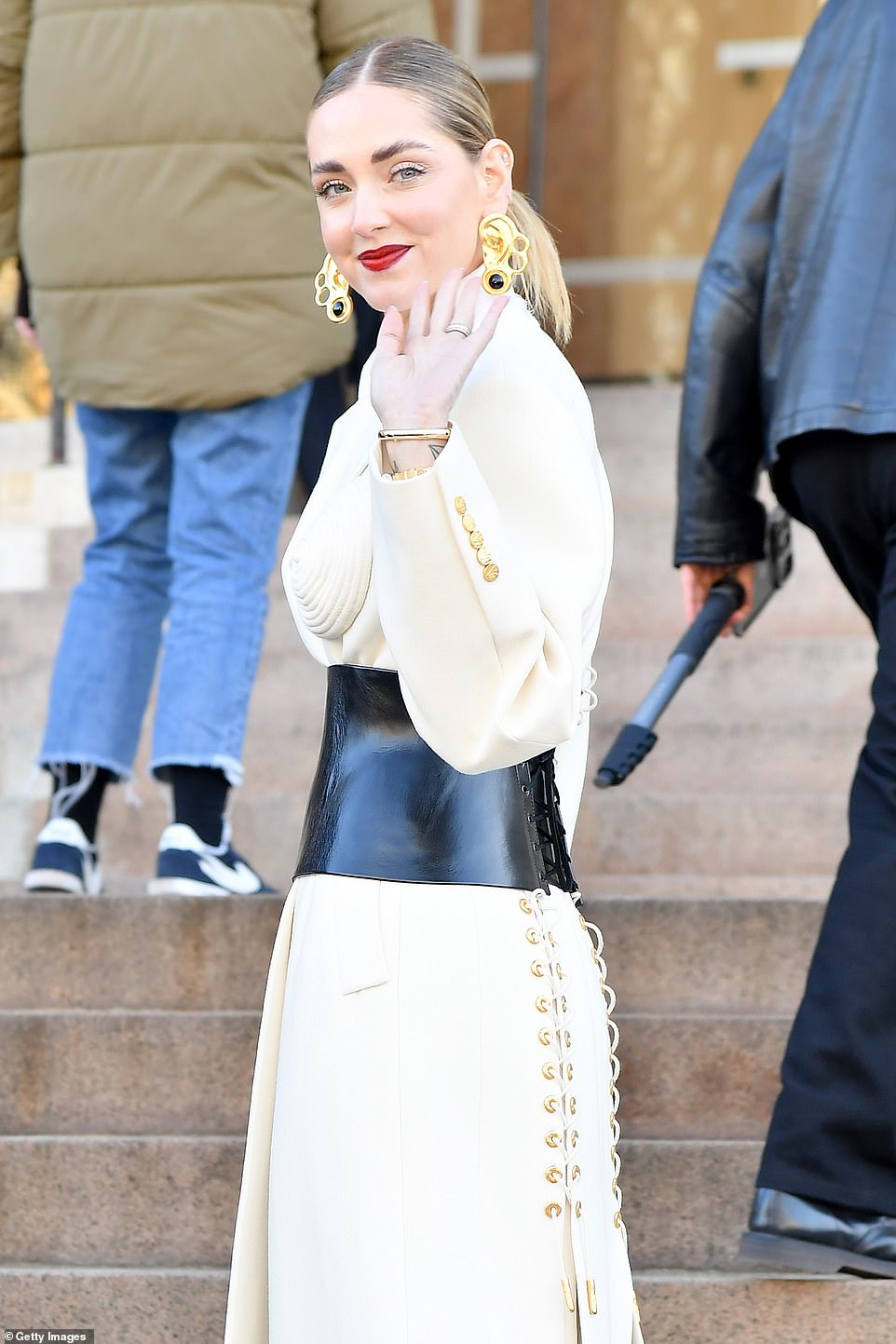 Kanye went viral last weekend by claiming that he would ‘beat Pete Davidson’s a**,’ in a verse from his new single Eazy released in collaboration with The Game.

His song also takes aim at his children: ‘When you give ’em everything, they only want more,’ and adding: ‘Boujee and unruly, y’all need to do some chores.’

The lyric continues: ‘Rich a** kids, this ain’t yo mama house. Climb on your brother’s shoulders, get that Top Ramen out.’

Further, he lambasts Kim’s parenting style, rapping: ‘I got love for the nannies, but real family is better. The cameras watch the kids, y’all stop takin’ the credit.’

Suited and booted: Filmmaker Farida Khelfa wowed in a taupe trouser suit with gold detailing on the blazer, while she kept warm with a black stole and gloves