An elementary school in Kansas closed for three days this week after being struck by a surge of respiratory illnesses among students and staff.

Christ the King Catholic School, a K-8 school of 250 students and 21 teachers in Kansas City, Kansas, closed on Wednesday after more than 50 children and seven staff members reported illness.

Officials plan to disinfect the building during the days off. It is set to reopen on Monday.

It comes amid a nationwide surge of the flu and respiratory syncytial virus (RSV) that has struck young children the hardest.

Pediatric hospitals across the US are reporting that they are at or near capacity as the uptick of cases overwhelms emergency rooms.

The Centers for Disease Control and Prevention (CDC) reported 7,945 new RSV infections during the week that ended on November 5.

This is a massive upward shift from the less than 2,000 cases reported at the start of September.

Just over 1,300 cases of influenza were also reported nationwide that week — up from just a few hundred in August and the highest figure of this flu season so far.

The surge has caused dozens of schools across the country to temporary close due to staffing issues or to prevent further spread of the virus.

Experts had warned that this year’s flu season would be harsher than years past after lockdowns during the pandemic left many people’s immune systems ill-prepared.

These closures for the flu also echo the devastating school policies instituted during the early months of the pandemic. 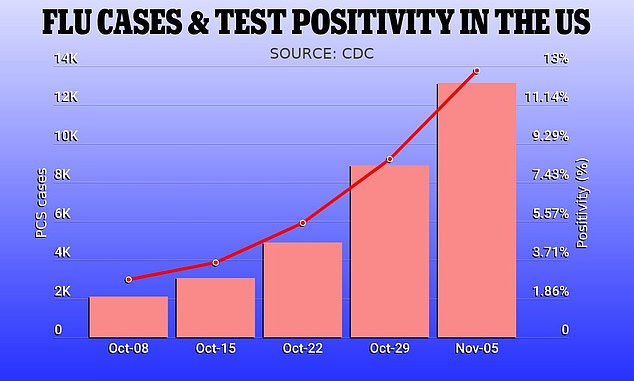 Confirmed flu cases reached 13,806 during the week that ended on November 5, a new high for this season and sharp growth from previous weeks 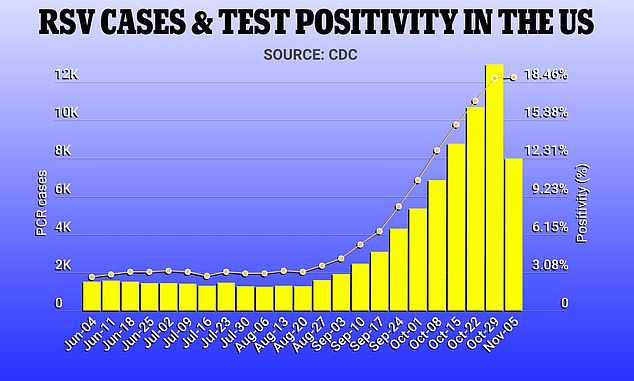 Confirmed RSV cases reached 12,905 during the week that ended on October 29, while positive test rate reached 18.8 per cent the week ending on November 5 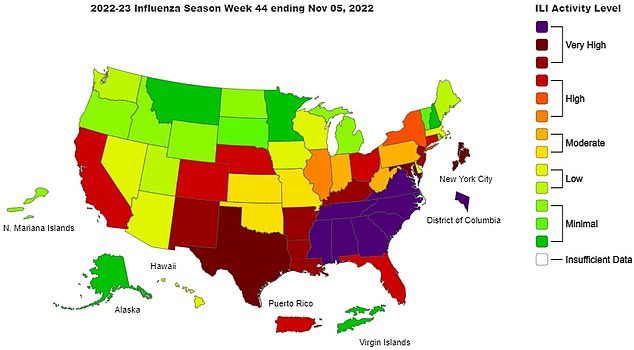 The CDC reports that 21 states are of ‘high’ or ‘very high’ flu activity, and six are suffering moderate activity

‘With the high number of positive Influenza A and RSV cases among our faculty, staff, and students we will be disinfecting the building as well,’ the school wrote on its Facebook page.

Cathy Fithian, principle of the school, also said that staffing shortages played a role in the decision.

‘If you can’t staff your building and have teachers in the classrooms, you just can’t have school,’ she said.

Thirteen schools in Alabama switched to remote learning amid a surging flu outbreak this week, with virus hospitalizations in the state three times higher than normal.

In a move reminiscent of Covid lockdowns, the Marshall County school district said it was suspending in-person teaching for four days.

The closures will ‘mitigate the spread of the virus’, according to the school which said it can’t stay open due to rising teacher absences.

The move will see more than 5,000 elementary and high school students forced to complete their lessons at home rather than in the classroom.

Students will have to log on to the school system from home to access their lesson materials. Some parents have already raised concerns, suggesting their child does not have access to a computer at home.

It comes despite mounting evidence that shutting schools during Covid robbed children of an education and widened inequalities.

Research indicates that the American schoolchildren slipped backwards by about six months in math alone on average, with those in the poorest areas now two-and-a-half years behind.

This is not the first school to have to close due to surging flu cases.

The Brighton School in Baton Rouge, LA –  a special school for dyslexic students – closed on October 25 due to surging respiratory illness cases.

Aquadale Elementary School and South Stanly Middle School, both just outside of Charlotte, North Carolina, closed on October 25 and 26.

In Decatur, Alabama, near the state’s northern border, Austinville Elementary School closed for a week from October 25 to October 31.

Lynchburg-Clay elementary, middle and high schools, in the Cincinnati, Ohio area, all either closed or went into virtual learning on November 4 amid an outbreak of respiratory illnesses.

All eight schools in Union County, Kentucky, closed on November 7 amid an outbreak of the flu.

There are fears that these types of school closures could set children behind, after long-term virtual learning during the early days of the COVID-19 pandemic led to social development issues among US kids.

Studies also show that many fell behind in key disciplines like math and reading.

Health officials have long warned that this year’s flu season would be more brutal than years past.

Common viruses like the flu largely disappeared during the first two years of the COVID-19 pandemic, as masking and social distancing prevented spread.

They are roaring back this year, though, as many do not have the necessary immune protection to fight off the virus.

Some have even warned of a ‘tripledemic’ as the flu, RSV and COVID-19 all usually reach their peak at the end of the year.

Confirmed RSV cases reached a new peak during the week that ended on October 29, with the CDC reporting 12,905 infections.

While weekly figures have since declined, a steadying of test positivity signals the true amount of cases is still rising.

Test positivity is considered a more accurate measure of an outbreak because it accounts for fluctuations in the numbers of tests carried out.

The 18.8 per cent test positivity rate during the week that ended November 5 is the highest of this season so far – slightly beating out the previous week’s mark of 18.7 per cent.

The virus poses a significant threat to young children. The CDC reports that up to 500 children in America die from RSV each year.

In young children, an infection can often cause pneumonia or inflammation of airways in the lungs. These are potentially deadly symptoms.

The flu is surging across America for the first time since Covid hit as well, with the US south being slammed the hardest.

According to the CDC, a cluster of southern states are being hammered by the flu.

Alabama, Georgia, Mississippi, North Carolina, South Carolina, Tennessee and Virginia are all reporting the highest levels of flu activity, according to the CDC.

The US is currently recording 40,835 new infections each day, a nine per cent increase over the past two weeks.

America is suffering 326 daily deaths from the virus as well, a nine per cent fall across 14 days.