Kamala Harris made history Saturday as the first Black woman elected as vice president of the United States, shattering barriers that have kept men – almost all of them white – entrenched at the highest levels of American politics for more than two centuries.

The 56-year-old California senator, also the first person of South Asian descent elected to the vice presidency, represents the multiculturalism that defines America but is largely absent from Washington’s power centers. Her Black identity has allowed her to speak in personal terms in a year of reckoning over police brutality and systemic racism.

As the highest-ranking woman ever elected in American government, her victory gives hope to women who were devastated by Hillary Clinton’s defeat four years ago.

Kamala Harris made history Saturday as the first Black woman elected as vice president of the United States, shattering barriers that have kept men – almost all of them white – entrenched at the highest levels of American politics for more than two centuries 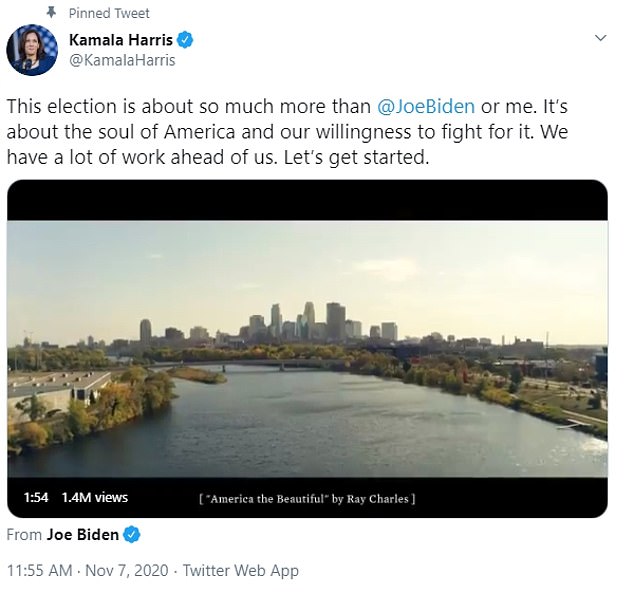 Harris has been a rising star in Democratic politics for much of the last two decades, serving as San Francisco’s district attorney and California’s attorney general before becoming a U.S. senator. After Harris ended her own 2020 Democratic presidential campaign, Joe Biden tapped her as his running mate. They will be sworn in as president and vice president on Jan. 20.

As the election was called for Biden on Saturday, Harris tweeted: ‘This election is about so much more than Joe Biden or me. It’s about the soul of America and our willingness to fight for it.

‘We have a lot of work ahead of us. Let’s get started.’

Biden´s running mate selection carried added significance because he will be the oldest president ever inaugurated, at 78, and hasn´t committed to seeking a second term in 2024.

‘We´re not often taught their stories,’ Harris said in August as she accepted her party’s vice presidential nomination. ‘But as Americans, we all stand on their shoulders.’

That history was on Sara Twyman’s mind recently as she watched Harris campaign in Las Vegas and wore a sweatshirt featuring the senator’s name alongside Chisholm.

‘It´s high time that a woman gets to the highest levels of our government,’ said Twyman, who is 35 and Black.

Despite the excitement surrounding Harris, she and Biden face steep challenges, including deepening racial tensions in the U.S. in the wake of a pandemic that has taken a disproportionate toll on people of color and a series of police killings of Black Americans. Harris’ past work as a prosecutor has prompted skepticism among progressives and young voters who are looking to her to back sweeping institutional change over incremental reforms in policing, drug policy and more.

Jessica Byrd, who leads the Movement for Black Lives´ Electoral Justice Project and The Frontline, a multiracial coalition effort to galvanize voters, said she plans to engage in the rigorous organizing work needed to push Harris and Biden toward more progressive policies.

‘I deeply believe in the power of Black women´s leadership, even when all of our politics don´t align,’ Byrd said. ‘I want us to be committed to the idea that representation is exciting and it´s worthy of celebration and also that we have millions of Black women who deserve a fair shot.’

Harris is the second Black woman elected to the Senate. Her colleague, Sen. Cory Booker, who is also Black, said her very presence makes the institution ‘more accessible to more people’ and suggested she would accomplish the same with the vice presidency.

Harris was born in 1964 to two parents active in the civil rights movement. Shyamala Gopalan, from India, and Donald Harris, from Jamaica, met at the University of California, Berkeley, then a hotbed of 1960s activism. They divorced when Harris and her sister were girls, and Harris was raised by her late mother, whom she considers the most important influence in her life. 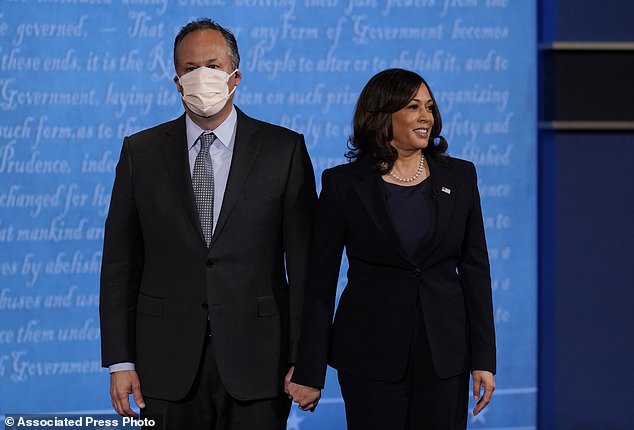 FILE – In this Oct. 7, 2020, file photo, Democratic vice presidential candidate Sen. Kamala Harris, D-Calif., stands with her husband Douglas Emhoff during the vice presidential debate with Vice President Mike Pence at Kingsbury Hall on the campus of the University of Utah in Salt Lake City. Harris made history Saturday, Nov. 7, as the first Black woman elected as vice president of the United States, shattering barriers that have kept men – almost all of them white – entrenched at the highest levels of American politics for more than two centuries.

Kamala is Sanskrit for ‘lotus flower,’ and Harris gave nods to her Indian heritage throughout the campaign, including with a callout to her ‘chitthis,’ a Tamil word for a maternal aunt, in her first speech as Biden´s running mate. When Georgia Sen. David Perdue mocked her name in an October rally, the hashtag #MyNameIs took off on Twitter, with South Asians sharing the meanings behind their names.

The mocking of her name by Republicans, including Trump, was just one of the attacks Harris faced. Trump and his allies sought to brand her as radical and a socialist despite her more centrist record, an effort aimed at making people uncomfortable about the prospect of a Black woman in leadership. She was the target of online disinformation laced with racism and sexism about her qualifications to serve as president.

Congresswoman Pramila Jayapal of Washington said Harris´ power comes not just from her life experience but also from the people she already represents. California is the nation´s most populous and one of its most diverse states; nearly 40% of people are Latino and 15% are Asian. In Congress, Harris and Jayapal have teamed up on bills to ensure legal representation for Muslims targeted by Trump´s 2017 travel ban and to extend rights to domestic workers.

‘That´s the kind of policy that also happens when you have voices like ours at the table,’ said Jayapal, who in 2016 was the first South Asian woman elected to the U.S. House. Harris won election to the Senate that same year.

Harris’ mother raised her daughters with the understanding the world would see them as Black women, Harris has said, and that is how she describes herself today.

She attended Howard University, one of the nation´s historically Black colleges and universities, and pledged Alpha Kappa Alpha, the nation´s first sorority created by and for Black women. She campaigned regularly at HBCUs and tried to address the concerns of young Black men and women eager for strong efforts to dismantle systemic racism. 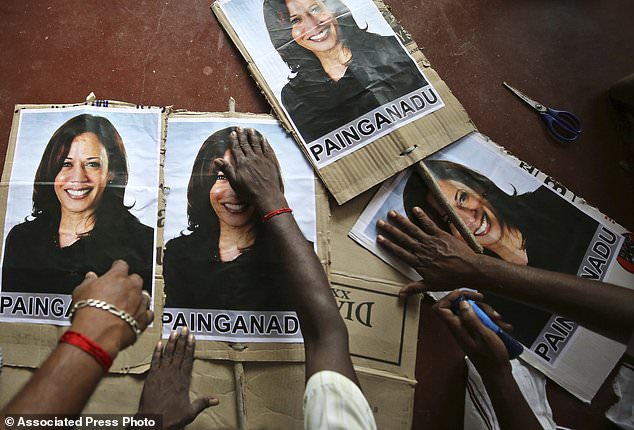 FILE – In this Nov. 6, 2020, file photo, villagers prepare placards featuring U.S. democratic vice presidential candidate Sen. Kamala Harris, as they prepare to celebrate should the Democratic Party win the presidential elections, in Painganadu a neighboring village of Thulasendrapuram, south of Chennai, Tamil Nadu state, India. Harris made history Saturday, Nov. 7, as the first Black woman elected as vice president of the United States, shattering barriers that have kept men – almost all of them white – entrenched at the highest levels of American politics for more than two centuries

Her victory could usher more Black women and people of color into politics.

San Francisco Mayor London Breed, who considers Harris a mentor, views Harris’ success through the lens of her own identity as the granddaughter of a sharecropper.

‘African Americans are not far removed from slavery and the horrors of racism in this country, and we´re still feeling the impacts of that with how we´re treated and what´s happening around this racial uprising,’ she said. Harris’ candidacy ‘instills a lot of pride and a lot of hope and a lot of excitement in what is possible.’

Harris is married to a Jewish man, Doug Emhoff, whose children from a previous marriage call her ‘Momala.’ The excitement about her candidacy extends to women across races.

Friends Sarah Lane and Kelli Hodge, each with three daughters, brought all six girls to a Harris rally in Phoenix in the race’s closing days. ‘This car is full of little girls who dream big. Go Kamala!’ read a sign taped on the car´s trunk.

Lane, a 41-year-old attorney who is of Hispanic and Asian heritage, volunteered for Biden and Harris, her first time ever working for a political campaign. Asked why she brought her daughters, ages 6, 9 and 11, to see Harris, she answered, ‘I want my girls to see what women can do.’