The Department of Justice has released a heavily redacted affidavit setting out the government’s justifications before the August raid on Donald Trump’s Mar-a-Lago resort – including a precise tally of the extent of the classified or secret information that was stored at the private club for more than a year.

DOJ says in the document that 14 out of the 15 boxes retrieved earlier in the year had classified information, with a newly unsealed breakdown revealing the amount of high-level secret information that was kept in a basement storage room and other facilities at the president’s club.

‘In total, Trump had 184 classified documents, 67 confidential, 25 top secret and handwritten notes in boxes returned to the National Archives, according to the document that states the FBI had ‘probable cause to believe evidence of obstruction would be found’ at his Florida home.

The FBI also conducted the search fearing that the release of classified documents could compromise ‘clandestine human sources’.

‘Based on my training and experience, I know that documents classified at these levels typically contain NDI,’ according to the signing agent’s affidavit, using the acronym for National Defense Information. ‘Several of the documents also contained what appears to be FPOTUS ‘s handwritten notes,’ the agent added.

The affidavit describes the classification markings that agents saw after a prolonged letter battle with Trump’s lawyers to gain access to the 15 boxes of material.

Each of those abbreviations references a different type of information that the government requires be shielded in a certain way.

The DOJ said it kept large portions of the documents redacted to protect the identity of civilian witnesses and members of law enforcement, including FBI agents, and fear it would ‘erode trust’ in the government’s investigation.

‘In short, the government has well-founded concerns that steps may be taken to frustrate or otherwise interfere with this investigation if facts in the affidavit were prematurely disclosed,’ the document reads.

The affidavit also states that Trump’s Florida home did not have a secure place to secure the documents, so agents asked him to lock the basement where they had been kept.

Although it is not entirely clear when the documents got there, a line between redacted portions references a CBS Miami article titled ‘Moving Trucks Spotted at Mar-a-Lago,’ dated Jan. 18, 2021.

It mentions a May 6, 2021 request by the National Archives for documents, but it wasn’t until December 2021 that officials were told boxes were found and ready for return.

The document relies on dry bureaucratic language to make the observation that Mar-a-Lago is not a secure designated storage facility. Private members pay thousands to golf and hob nob there, Trump has ducked into weddings and posed for selfies with the bride and groom, and where a Chinese national got arrested sneaking in during Trump’s tenure in office.

The ‘PREMISES are not authorized to store classified information,’ it notes.

All sides have been demanding the release of the affidavit presented to a Florida judge who authorized the search earlier this month.

Trump hoped it would expose the lack of evidence against him. 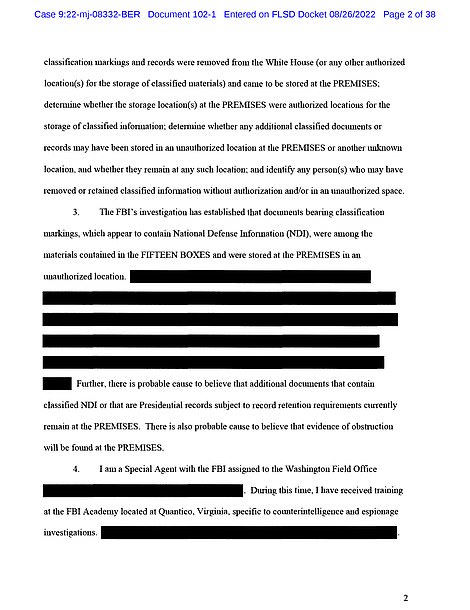 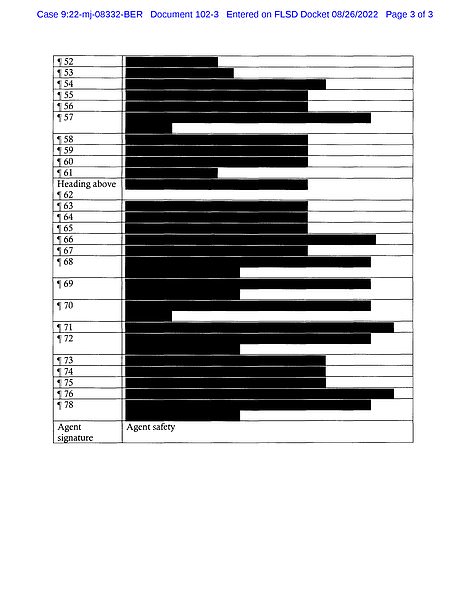 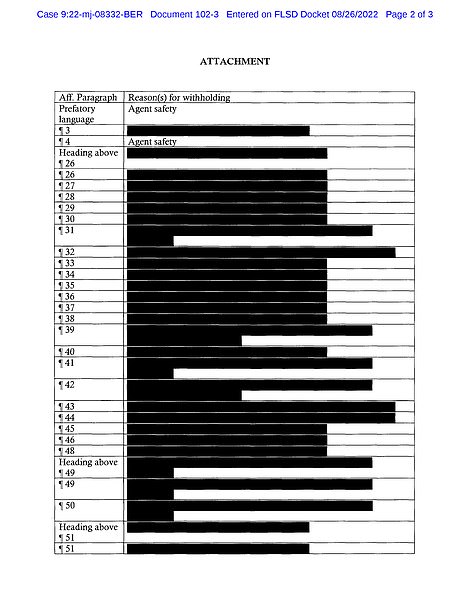 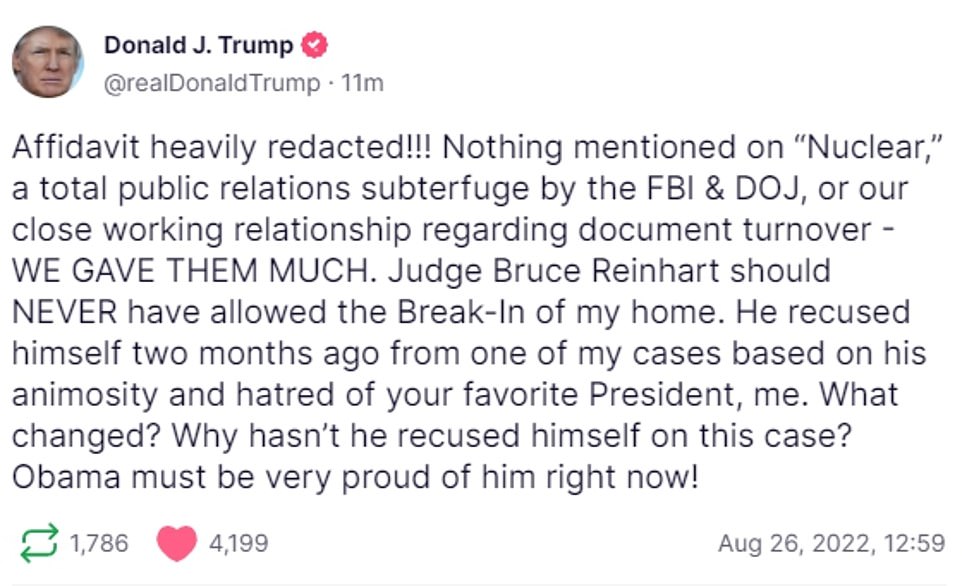 Former President Donald Trump took to Truth Social Friday to note that there was ‘nothing mentioned on “nuclear,”‘ amid other complaints 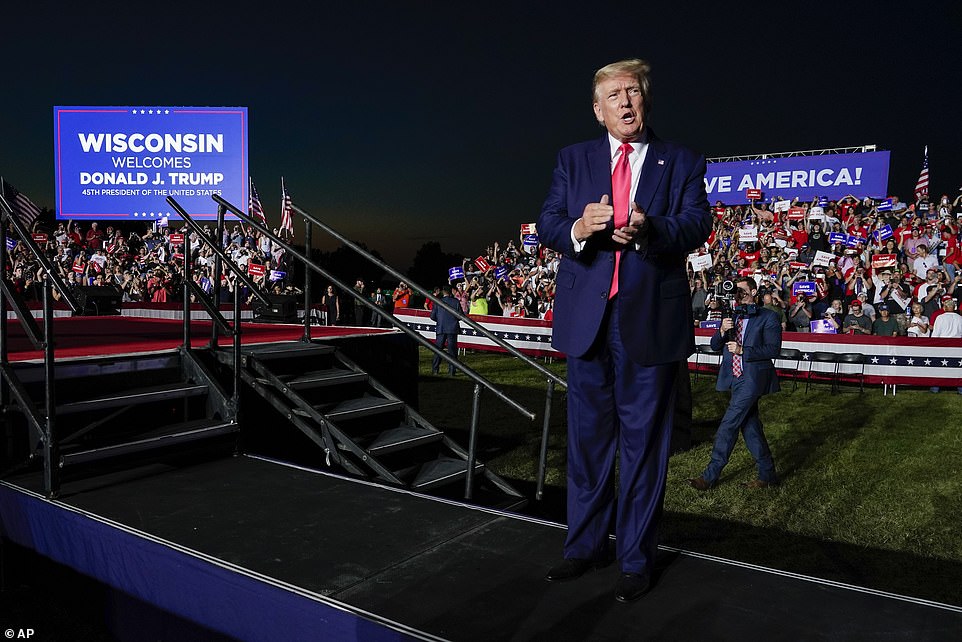 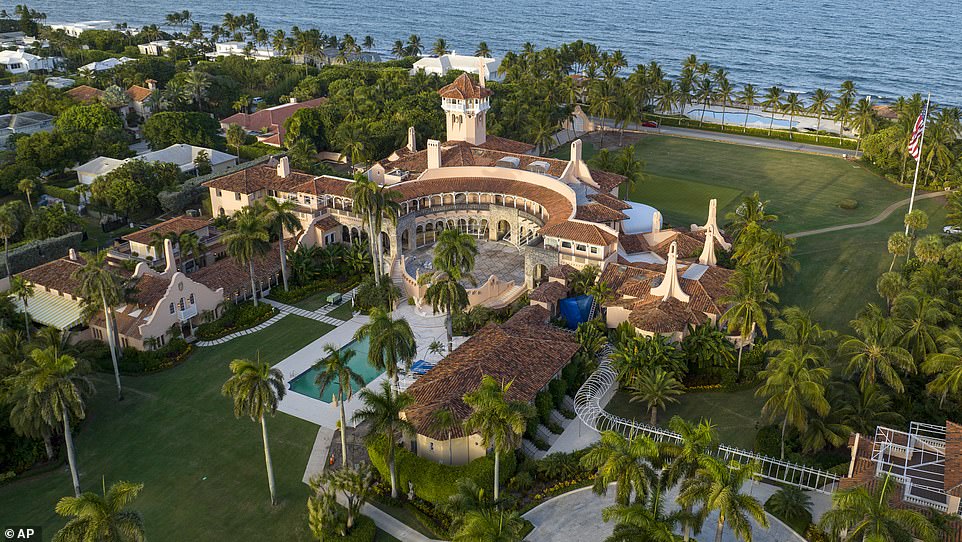 FBI agents arrived at former President Donald Trump Florida home on the morning of Monday August 8. They removed boxes of classified material and other presidential documents

‘Nothing mentioned on “Nuclear,” a total public relations subterfuge by the FBI & DOJ, or our close working relationship regarding document turnover – WE GAVE THEM MUCH.’

The Washington Post reported in the aftermath of the raid that FBI agents were in pursuit of classified documents related to nuclear weapons – a claim that Trump denied.

‘Judge Bruce Reinhart should NEVER have allowed the Break-In of my home. He recused himself two months ago from one of my cases based on his animosity and hatred of your favorite President, me. What changed? Why hasn’t he recused himself on this case? Obama must be very proud of him right now!’ Trump added.

His critics believed it would show how he was suspected of breaking laws governing presidential records and the handling of classified documents.

However, the Justice Department warned it would put agents and informants at risk, and could endanger an ongoing investigation.

President Biden said on Friday it was up to the Justice Department to determine if Trump compromised national security by taking the boxes to his home.

‘We’ll let the Justice Department determine that,’ he said at the White House when questioned by reporters.

Such documents – which include agents setting out key pieces of evidence – routinely remain sealed during pending investigations, making the judge’s decision to reveal portions of it all the more striking.

But in an acknowledgment of the extraordinary public interest in the investigation into a former American president, U.S. Magistrate Judge Bruce Reinhart on Thursday ordered the department to make public a redacted version of the affidavit by noon on Friday.

In his order, Reinhart said the blacked-out portions were sufficiently narrow.

‘I find that the government has met its burden of showing a compelling reason/good cause to seal portions of the affidavit,’ he wrote, adding that blacked out portions were necessary to protect witnesses, agents and parties who had not been charged – as well as the overall strategy and scope of the probe.

Earlier White House Press Secretary Karine Jean-Pierre said emphatically Thursday that ‘no one’ at the White House was briefed on the FBI’s raid this month of Mar-a-Lago that resulted in the removal of classified documents.

Her comment followed President Joe Biden’s own forceful response on the matter – following the publication of letter showing back and forth between the nation’s archivist and Trump representatives that mentioned the White House counsel’s office.

That exchange, from the spring of this year, showed the White House deferring to the archivist on former President Donald Trump’s claims of privilege over the material that the FBI wanted to access, but nevertheless revealed White House knowledge of a spat over materials Trump had returned voluntarily.

She made the comment when asked point-blank by CNN host Don Lemon about ‘who in the White House knew about the investigation?’

‘So, those are two different things, so let me just say that for a second. Look, when it comes to the investigation, the search that we saw recently that you all have reported on, we have been very clear on this. The president was not briefed. No one at the White House was briefed. We were not briefed on the investigation,’ she said. 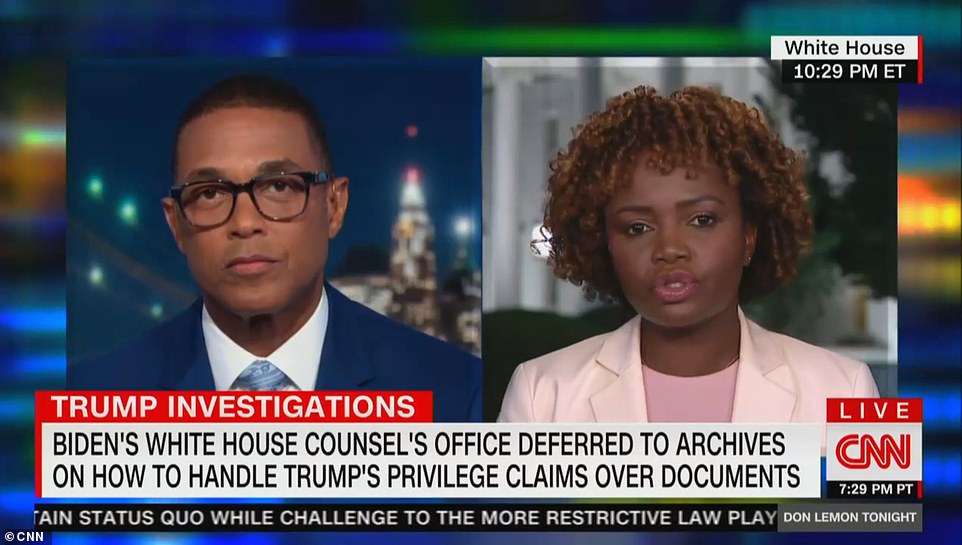 On Wednesday, President Joe Biden told reporters he we never tipped off about the FBI’s raid, which has drawn howls of protest from Republicans and from Trump and his allies.

‘I didn’t have any advanced notice. None. Zero. Not one single bit,’ Biden said, making a zero sign with his hand for emphasis.

She said Biden had promised to ‘restore the independence of the Department of Justice.’

‘We do not comment, we do not interfere, and we do not get briefed,’ she said.

She didn’t directly answer when asked if the White House knew that the documents were at Mar-a-Lago, keeping her comments to the search.

‘What we did is we deferred. We deferred to the Department of Justice,’ she told Lemon, who wanted to know: ‘Who is we?’

‘I’m going to leave the letter, let the letter speak for itself,’ she said.

‘I don’t have specific names or specific – the White House deferred that to the national archivist,’ she said.

She was referencing the decision to defer to the archivist on privilege matters after Trump returned 15 boxes of material from Mar-a-Lago, following months of requests from the government.

A letter by the acting head of the National Archives to Trump lawyer Evan Corcoran from May 2021, details the FBI’s push to review 15 boxes of material after Trump had authorized their return from the private club where he makes his home.

Trump was seeking to make a ‘protective assertion of executive privilege.’

Acting Archivist of the U.S. Debra Steidel Wall wrote that it was the incumbent president who could assert privilege – and also revealed communications with the White House counsel’s office over the matter.

‘The Counsel to the President has informed me that, in light of the particular circumstances presented here, President Biden defers to my determination, in consultation with the Assistant Attorney General for the Office of Legal Counsel,’ she wrote.

The tense exchange comes on a day when a Judge Bruce Reinhart accepted from the Justice Department a redacted version of the affidavit used to justify the search warrant on the former President.

He ordered it to be released Friday afternoon, after media organizations intervened for its release. Prosecutors resisted, saying it could compromise its probe or lead to harassment of witnesses.

The document is expected to be heavily redacted, but observers on all sides are waiting to see what it reveals about what the government has established in its potential Espionage Act and obstruction investigation and what the FBI was looking for.

Trump went on an online rampage on his Truth Social platform, dismissing claims that Biden didn’t know about the raid, without offering evidence that he did.

‘Joe Biden said he knew nothing about the Break-In of Mar-a-Lago or, the greatest political attack in the history of the U.S. Does anybody really believe this???’ Trump wrote wrote.

Daughter-in-law Lara Trump also accused Biden of lying on Thursday morning after the commander-in-chief said he had ‘zero’ advance notice of the FBI’s unannounced search of Mar-a-Lago.

‘I don’t think anyone believes Joe Biden,’ she said on Fox & Friends. ‘We know it’s a lie,’ she said.