They might have quit as working royals more than 18 months ago, but New York rolled out the red carpet for Harry and Meghan yesterday.

With a private sightseeing visit hosted by the city’s mayor and governor, a tour of the 9/11 Memorial while it was closed to the public for them and a meeting with the US ambassador to the UN, the Duke and Duchess of Sussex were treated like royal visitors, even though they are – supposedly – very much private citizens.

It was the couple’s first major public outing since walking away from the British monarchy and moving to California last year.

They are in New York to make a personal appearance at the Global Citizen Live event tomorrow, to push for a more equal Covid-19 vaccine roll-out.

But they have decided to make the most of their visit, packing in several high-profile public events before then. 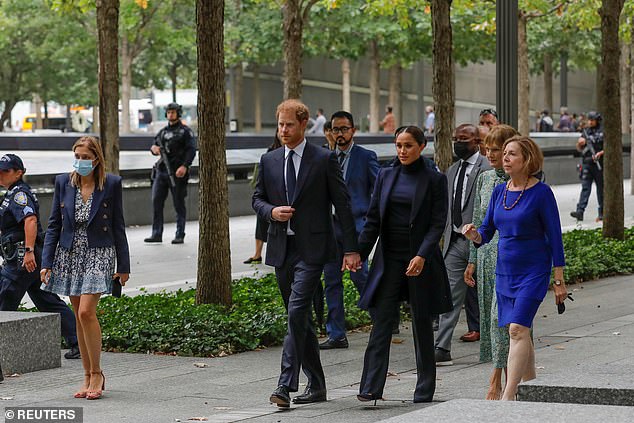 Britain’s Prince Harry and Meghan, Duke and Duchess of Sussex, walk while visiting the 9/11 Memorial in Manhattan

They have brought along a personal photographer to document their trip, LA-based Matt Sayles, who has worked with them before.

Two of his pictures were posted on social media by ambassador Linda Thomas-Greenfield last night with the words: ‘Wonderful meeting with Prince Harry and Meghan, the Duke and Duchess of Sussex. Important discussion of Covid, racial justice, and raising mental health awareness.’

The duke and duchess are staying at the Carlyle Hotel, where a top suite costs upwards of £4,500 a night.

The couple were spotted in the hotel’s exclusive Bemelmans Bar on Wednesday night accompanied by two friends and a large security team.

They were drinking with Meghan’s friends, designer Misha Nonoo and her husband Mike Hess.

Witnesses said the couple, who appear to have left children Archie and Lilibet in California for the three-day trip, sipped cocktails as their ‘hired muscle’ took over tables around them, trying to blend in.

Fellow drinkers said Harry and Meghan had martinis before leaving via the back door around three hours later and apparently heading off for dinner.

There was a phalanx of security including guards who described themselves as working for the Department of Homeland Security, suggesting Harry and Meghan were getting some sort of official US government protection, on top of their own private bodyguards. 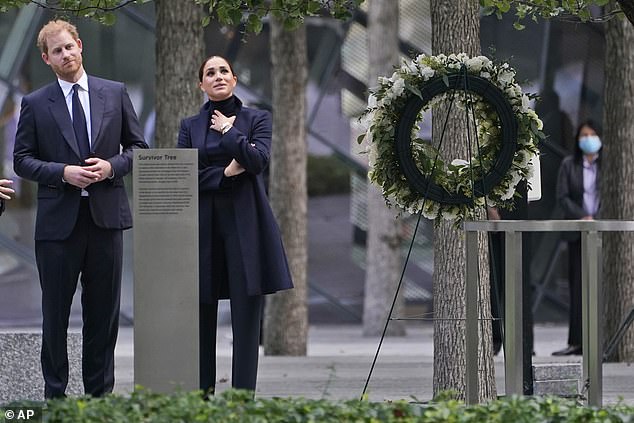 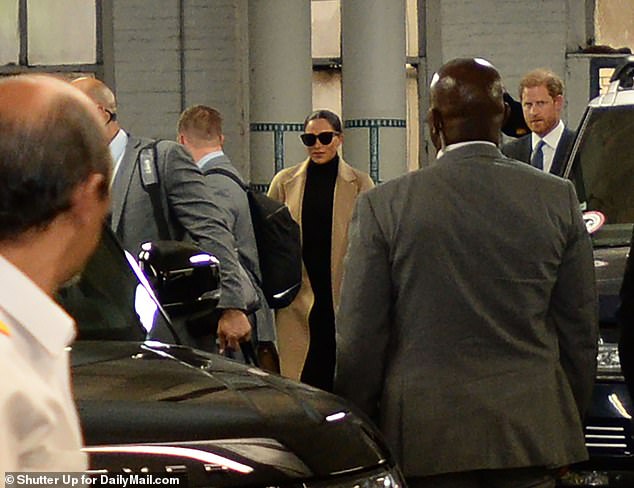 They drove in a fleet of gas-guzzling SUVs with blacked-out windows, accompanied by a car with flashing red and blue lights, and a sign saying ‘police line permit’.

The couple started the day at 8.15am with a visit to the One World Trade Center Observatory.

Walking in with a group of bodyguards, advisers and press officers, they held hands in matching dark outfits – Harry in a navy suit and Meghan in a navy jumper and coat with black trousers and heels.

Both inside and outside the building, there was the air of a state visit, according to some of those working there, with dozens of security officials and NYPD officers standing guard.

When asked how it was to be in New York, Meghan smiled and answered: ‘It’s wonderful to be back.’

The last time she visited was in 2019 when she flew out from London to cheer on close friend Serena Williams at the US Open.

The trip was much commented on given her and Harry’s espousing of green credentials – and it is not clear if they travelled from California on a scheduled flight or a private jet that they have previously used inside the US. 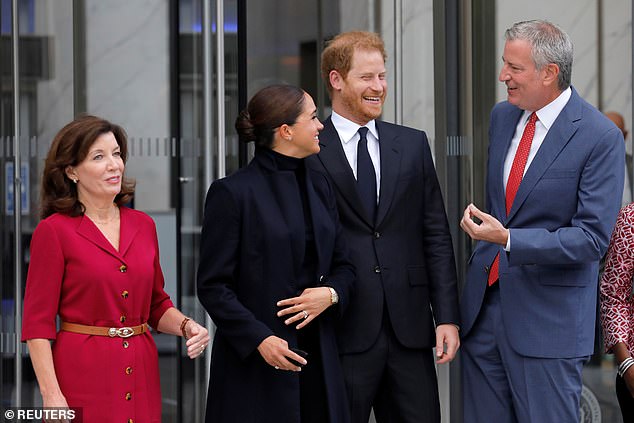 Afterwards they travelled to the nearby 9/11 Memorial, spending half an hour in the museum. It is believed they had a wreath of flowers displayed on their behalf.

But it was a short stop-off, before they drove off again at 12.30pm to the Manhattan penthouse home of the US ambassador to the UN, Mrs Thomas-Greenfield.

There was no explanation from the Sussex’s extensive PR team as to the purpose of these visits.

At a press conference later in the day a reporter asked him why he had time to host ‘the royals’ instead of visiting the crisis-hit Rikers Island jail.

He blustered a bit, but didn’t take the bait.