EXPRESS INFORMER > News & Politics > Just how DO you beat Novak Djokovic at Wimbledon? That’s like asking how you walk on water!

How to beat Novak Djokovic at Wimbledon is a problem even the so-called King of Grass, Roger Federer, could not work out. Djokovic has beaten Federer in all three of their All England finals and goes into Sunday’s match-up against Matteo Berrettini. He hasn’t lost a singles match here since 2016.

The runaway favourite this year pulled out with a third-round injury in 2017 and has been invincible on Centre Court ever since.

To find out how, or if, the top seed just might be beaten, we canvassed the great and the good of the game for some top tennis tips.

But as Sascha Bajin, the man who helped guide Serena Williams and Naomi Osaka to world No.1 status, told me: ‘Oh, man. That’s like, how do you walk on water? That’s a tough one!’

‘Berrettini does have a chance. From the back, I was outplaying Djokovic a good portion of the match. I think Matteo is looking solid from the back. He’s slicing a lot and that’s going to be uncomfortable for Djokovic.

‘I think with the serve that he has, if he can manage to sneak out a break here or there, win a couple tiebreaks, I think it’s going to be really tough for Djokovic to break him, but obviously, he’s such a good returner.

‘It’s going to be tough but there’s always a chance, like I said before my match against Djokovic, and it’s the same for Berrettini.’

‘Berrettini has got to go for everything. He’s serving incredibly well, not only the speed but the power and the accuracy. Likewise with his forehand. I’ve been impressed with his slice backhand as well.

‘The only element of vulnerability for Djokovic is when he feels that the crowd is against him. That frustrates him. That goes back to his desire to be loved as well as the best player that has ever lived. Would I rather be the most popular or best player that ever lived? I certainly would choose the latter.’ 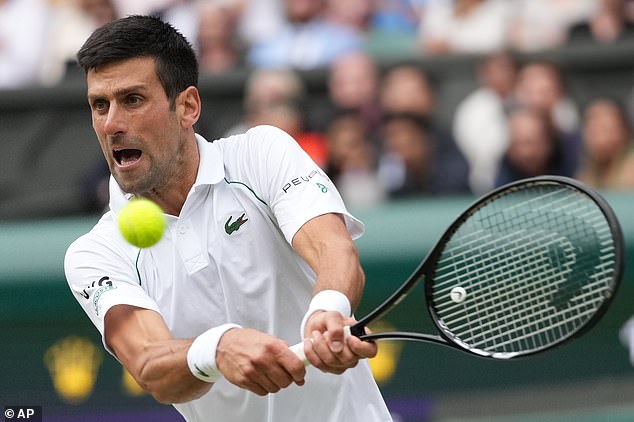 ‘You need to stop him returning serve and Berrettini can serve 135mph regularly on the lines. Then you’ve got to damage Djokovic’s consistency, put him on the run. You can’t play him on his terms.

‘Berrettini’s got the ability to do it on his own terms and that’s what’s exciting. Tactically, he has the game to beat Djokovic. So do a lot of players but whether you can keep it up for five sets is another story. They always said, when the going gets tough, the Italians go shopping. Not in this guy’s case. Berrettini’s a great competitor.’

‘Where to start against a player who has no obvious weakness? The only obvious tactic is to be as aggressive as possible and hope you can sustain that aggression.

‘The thing about playing above yourself in an aggressive way is that it can have the potential to unsettle him as he’ll not always be expecting that level of tennis from every opponent.

‘Putting an element of doubt into his mind and getting the crowd on your side will also be a factor as it seems Djokovic can sometimes look unsettled when he’s not getting the same level of support Roger and Rafa get.’ 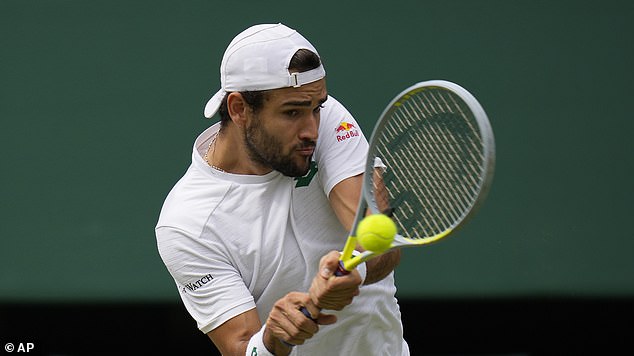 Italy’s Matteo Berrettini, 25, will be playing in his first Grand Slam final on Sunday

‘Berrettini is 6ft 5in and 15 stone — he has two huge weapons. If he hits his spots on the serve he’s going to be OK. And he has to be bold with his forehand. If they get into a neutral rally, Djokovic is going to break his backhand, so he’s got to get a lot of points from five shots or less — bludgeon the point over. He has to slice backhand, like a boxer uses a left-hand jab, to give him time to get on the forehand.’

Has beaten Djokovic in three of their 12 matches

‘It’s going to be tough to beat Djokovic but Berrettini is doing well. He has a lot of confidence and did a great job in Paris. He’s doing well here, too.

‘I think when you play Djokovic, you have to be patient. You have to play long rallies to make him tired. That’s what I did.’

Tim Henman and Pat Cash are part of the BBC’s Wimbledon line up. Watch the men’s Wimbledon Final from 1.05pm Sunday 11 July on BBC One.