Just Eat Takeaway has seen orders fall this year as the loosening of Covid-19 restrictions brought customers back to restaurants.

Following two years of unprecedented expansion, the volume of orders made on the delivery platform declined by 7 per cent to 509.4 million in the six months ending June, against the same period in 2021.

Demand fell in all regions, with the largest drop occurring in North America, its largest market, where orders slumped by 20 million after growing by record levels in the previous year.

Slump: Following two years of unprecedented expansion, the volume of orders made on the Just Eat platform declined by 7 per cent to 509.4 million in the six months ending June

However, the overall value of purchases remained stable at €14.2billion thanks to the size of average transactions increasing due to higher food prices and positive currency fluctuations.

This helped the firm’s total revenues jump by 91 per cent to €2.78billion, as did the its takeover of Chicago-based Grubhub, which it bought just over 12 months ago for £5.75billion.

Because of impairment related to the acquisition of the American delivery business, Just Eat’s total first-half losses soared from €486million last year to nearly €3.5billion this time around.

On an underlying basis, though, the company’s losses improved to €134million, with its North American business nearly breaking even and operations in the British Isles and Northern Europe turning profitable in the second quarter.

The London-listed group expects its adjusted earnings margin to remain negative this year before turning positive in 2023.

Chief executive Jitse Groen said: ‘After a period of exceptional growth, Just Eat Takeaway.com is now two times larger than it was pre-pandemic.

‘Whilst this growth required significant investment, we have continued to focus on executing our strategy to build and operate highly profitable food delivery businesses…Our path to profitability is accelerating.’ 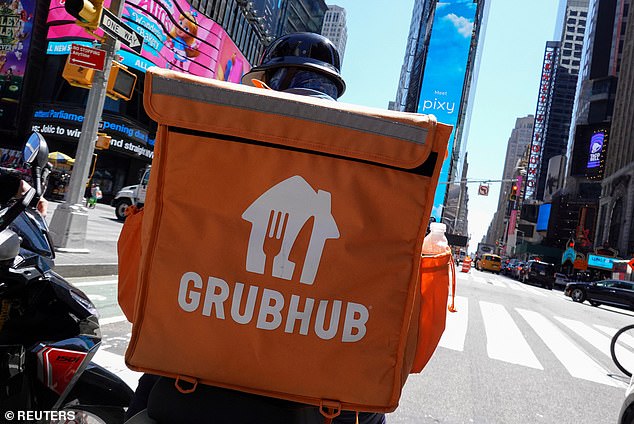 Decline: Some investors are pressuring Just Eat to sell Grubhub to boost its stock price. Just Eat Takeaway.com shares have plummeted by around three-quarters in the past 12 months

Just Eat Takeaway.com shares surged 6 per cent to 1,650.4p in early trading, although their value has plummeted by around three-quarters in the past 12 months.

Some investors have pressured the delivery service to sell Grubhub to boost its stock price, amid calls for the removal its finance boss and numerous other board members at the annual general meeting earlier this year.

Chief financial officer Brent Wissink held onto his post, although before the meeting took place, Just Eat chairman Adrian Nuuhn announced that he was standing down.

But the company said it was continuing to consider a partial or full sale of Grubhub, which struck a partnership with retail giant Amazon last month that allows Amazon Prime users to order food without paying delivery fees.

Keith Bowman, an investment analyst at Interactive Investor, said: ‘Just Eats’ timing in buying Grubhub, and against the backdrop of the Covid crisis, was arguably ill-judged given today’s €3billion impairment, and including adjustments for sector valuation falls.’