Jurgen Klopp has been charged by the Football Association for improper conduct after berating the assistant referee in his side’s 1-0 win over Manchester City.

The Liverpool manager was sent to the stands by Anthony Taylor after being deemed to have acted in an aggressive manner towards Gary Beswick following the officials’ waving play on when Klopp felt Mohamed Salah had been fouled.

The FA’s charge, relating to Klopp’s breaking of the FA Rule E3, opens the prospect of the Liverpool manager having to spend one or more games in the stands.

Charging Klopp on Tuesday afternoon, the FA’s statement read: ‘Jurgen Klopp has been charged with a breach of FA Rule E3 following the Premier League game between Liverpool FC and Manchester City FC on Sunday [16/10/22].

‘It is alleged that the Liverpool FC manager’s behaviour during the 86th minute of this game was improper and he has until Friday [21/10/22] to respond.’

Rule E3 in the FA’s handbook for the 2022-23 season reads as follows: ‘A participant shall at all times act in the best interests of the game and shall not act in any manner which is improper or brings the game into disrepute or use any one, or a combination of, violent conduct, serious foul play, threatening, abusive, indecent or insulting words or behaviour.’

In a feisty and tetchy game, Klopp had previously got too close to the fourth official when complaining about another incident and his shouting at Beswick was adjudged to have overstepped the mark. 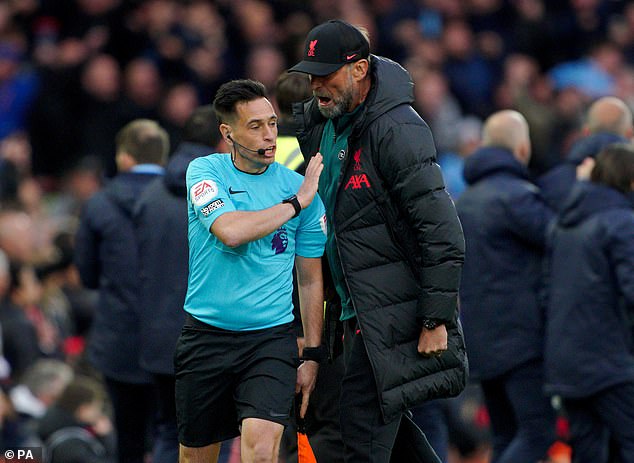 Although it remains unclear exactly what was said by Klopp, the nature of his aggression and how close he got to the assistant appeared to leave the FA little choice but to act.

Despite admitting after the game that he deserved a red card for his conduct, Klopp doubled down on his criticism of the officials saying that they had missed an obvious foul.

He told Sky Sports: ‘In the end, probably deserved, but you cannot have this situation.

‘It is the clearest foul I ever saw in front of the linesman and he is not bothered. It is clear. They just watch the game but we [the managers] are involved.’ 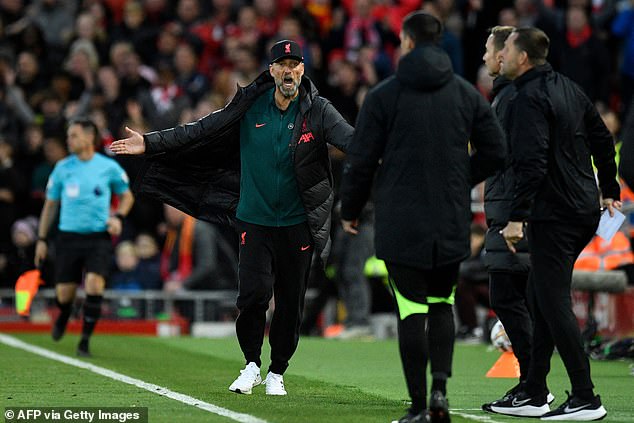 His actions and comments after the fact sparked criticism from those who suggest those at grassroots who extensively abuse – both verbally and occasionally physically – are learning their behaviour from the top level.

Dr Tom Webb, who has research referee abuse, told The Telegraph: ‘”If coaches and players in the Premier League are doing it, then it must be OK”

‘What sort of message does this (Klopp berating the official) send to people watching? It’s images like this that make people think referees are fair game.’