A Kent man has appeared in court charged with the murder of PCSO Julia James.

Callum Wheeler, 21, from Aylesham, was formerly accused of killing the 53-year-old at the hearing.

He appeared at Medway Magistrates Court in person before being remanded back into custody for a hearing at Maidstone Crown Court on Thursday.

Mrs James, a mother of two, went missing while walking her beloved Jack Russell near to her home in Snowdon, Kent, last month.

She was later found dead by members of the public in nearby Akholt Wood on Tuesday, April 27.

Detectives investigating Mrs James’ death say she had suffered head injuries. Her dog, named Toby, was unharmed and remained beside her body.

Officers from the Kent and Essex Serious Crime Directorate arrested Wheeler on Friday. 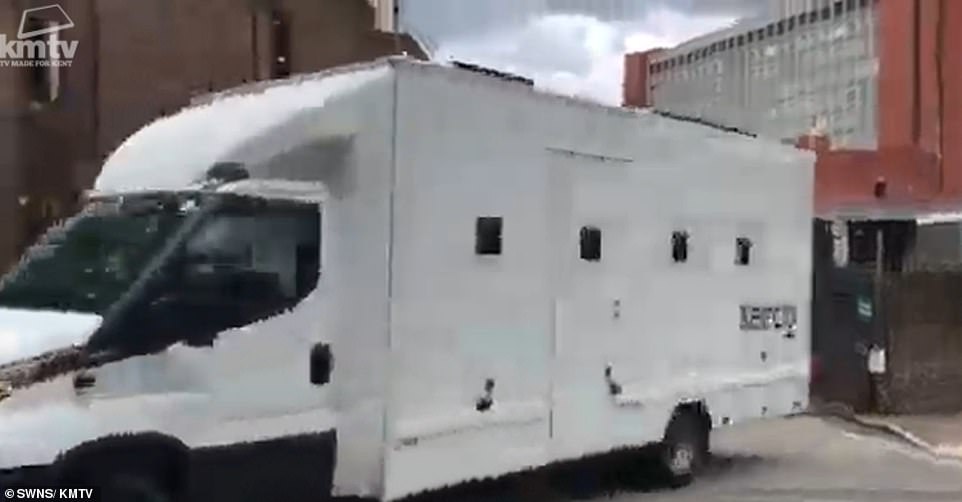 Callum Wheeler, aged 21, from Aylesham, in Kent, is taken from court in a prison van this morning after his hearing 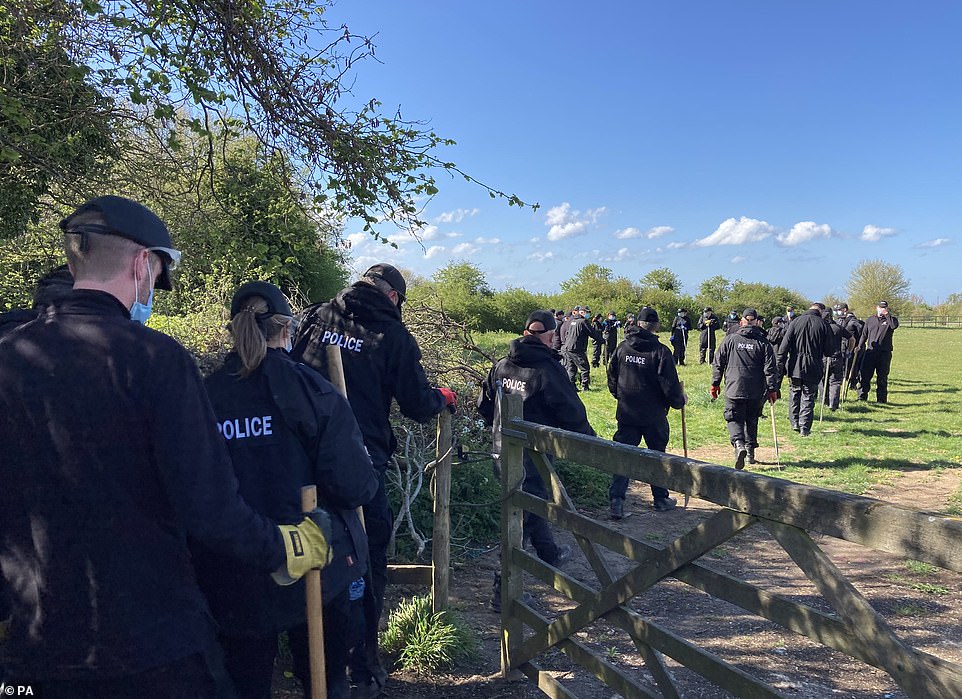 Police officers search a field off Ratling Road in Aylesham, Kent, earlier today as part of the investigation into the death 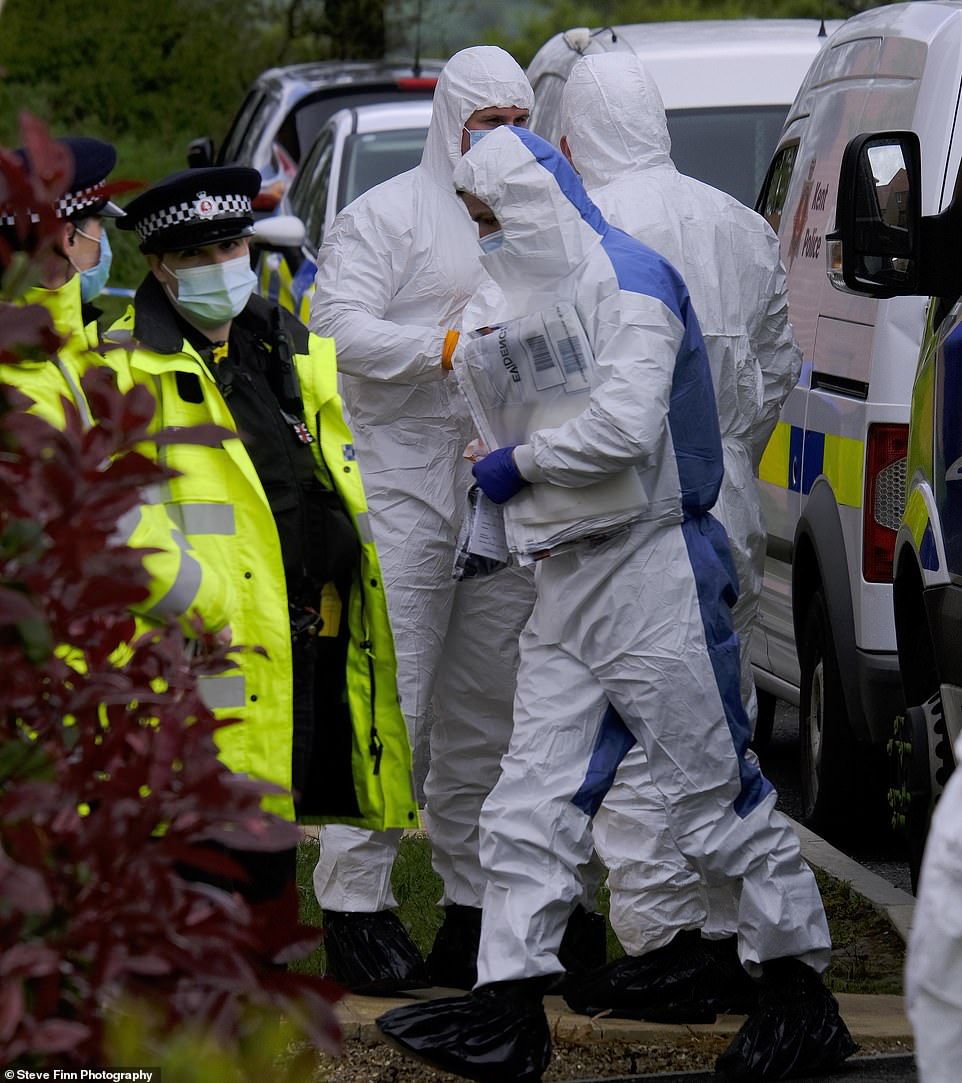 The force had been granted a 36-hour extension, until Monday evening, to continue holding Wheeler in custody.

In a statement, Kent Police said: ‘Detectives investigating the death of Police Community Support Officer Julia James have charged Callum Wheeler, 21, from Aylesham with her murder. 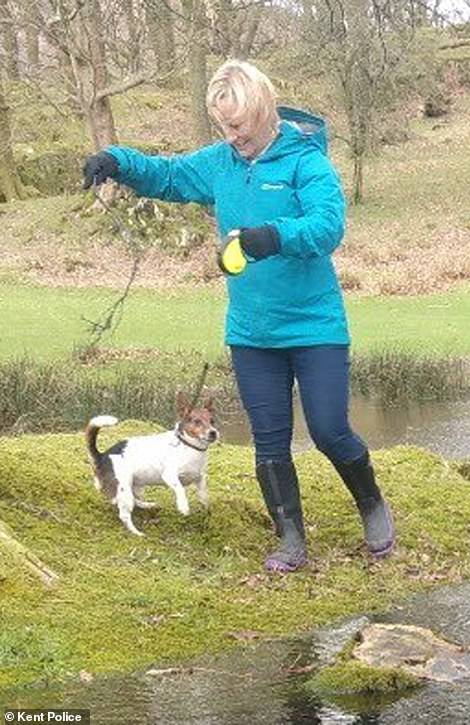 ‘Mr Wheeler remains in custody and is due to appear via video link at Medway Magistrates Court on Tuesday.’

News of a charge comes after the daughter of Mrs James earlier backed calls for a doorstep clap to recognise the ‘hard work and dedication’ of police involved in the case.

Bethan Coles, a serving officer herself, backed an idea put forward by locals who plan to take to their doorsteps for a minute’s applause similar to the clap for our carers campaign during the pandemic.

They plan to hold the tribute at 7pm on tonight to thank the police.

On a Facebook post advertising the idea, Bethan said: ‘This is a lovely way to acknowledge the hard work and dedication of all the officers involved.

‘I am so thankful of everything they have done so far.’

He also used a ‘Help us find #justiceforjulia’ frame around the picture – which Mrs James’ son in law Chase Coles said more than 8,600 have added to help the family’s appeal. 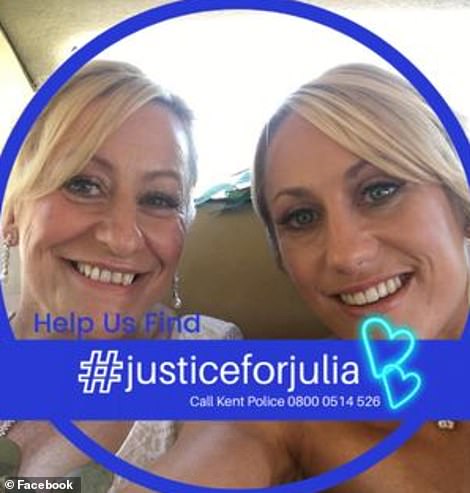 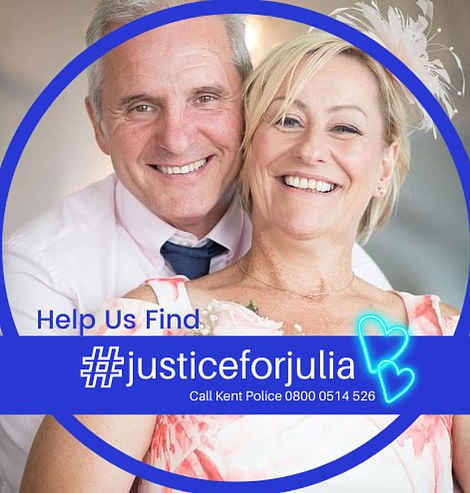 Their chief executive Fran Ellis described ‘kind, caring and generous’ Mrs James as a ‘devoted supporter and advocate for survivors of domestic abuse’ who would ‘go out of her way to help anyone’.

Yesterday, two domestic abuse survivors who Mrs James helped have explained how she gave them the strength and self-worth to break free from their abusive relationships.

One victim said: ‘Julia was one of the most kind and caring women I have ever come across.

‘She genuinely cared about every woman she spoke to and had a way of making you feel so calm and safe around her. 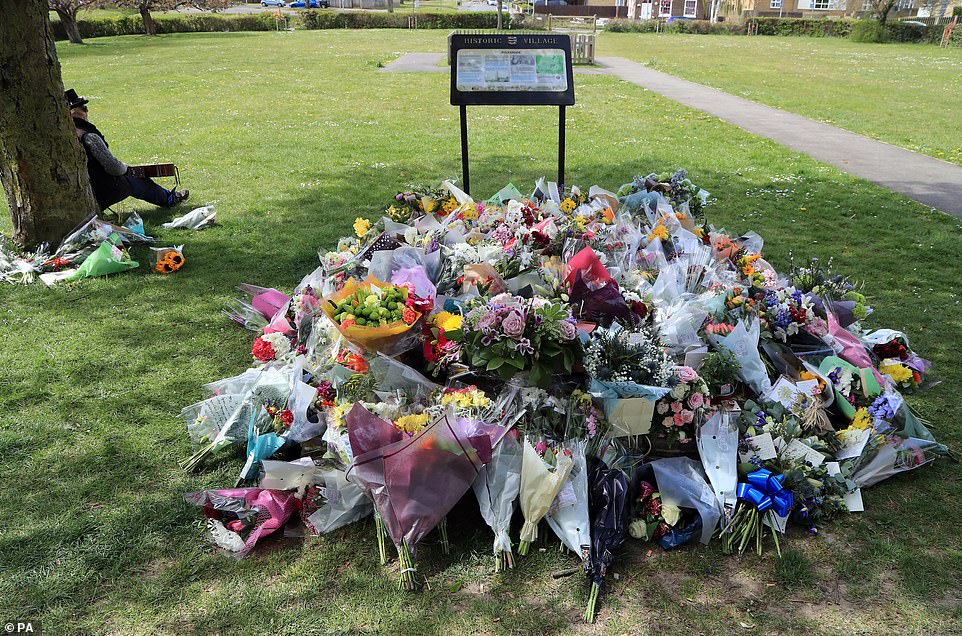 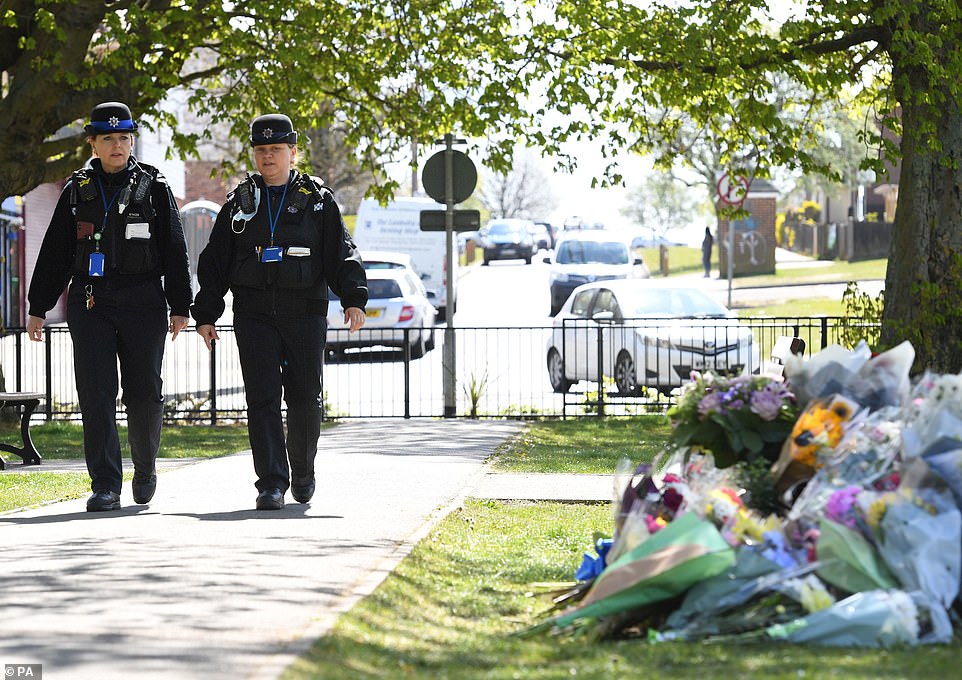 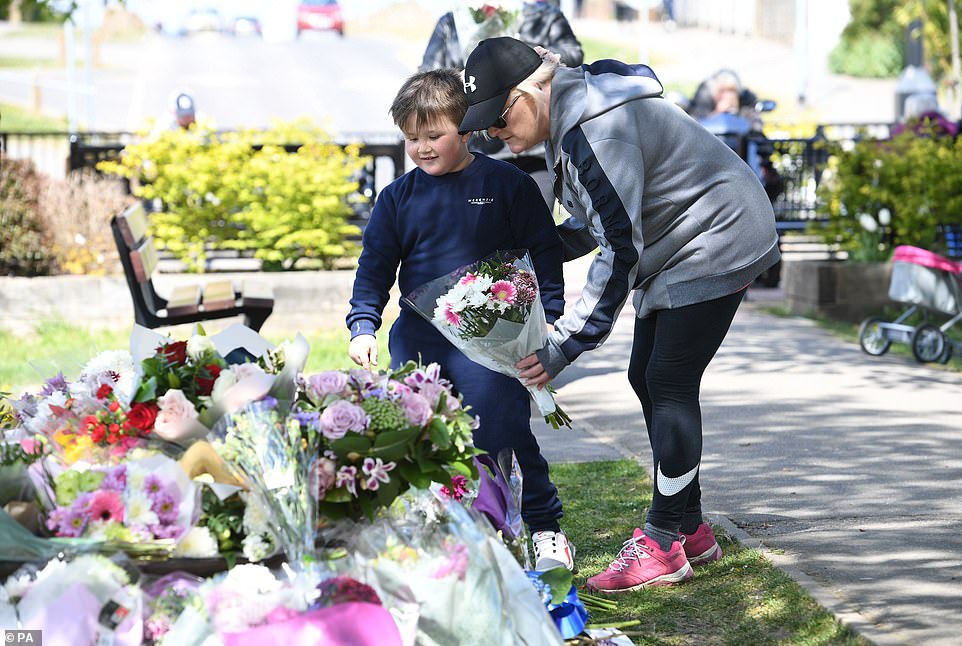 Mourners lay floral tributes in a park in Aylesham village close to the scene in Snowdown, Kent, where the body of PCSO Julia James was found

‘She was truly one of a kind, with a heart of gold, and she spent so much time helping others, more than she realised.

‘When I met Julia I had not spoken about what I had been through before.

‘I had no confidence and felt a part of me was broken. She took the time to listen and understand everything.

‘Not only did she help me heal but she helped me realise my worth and that it was not my fault.

‘I owe Julia so much and will be forever thankful that she came into my life.’

Another victim who Mrs James supported said: ‘When I first left home with my children after a particularly bad altercation with my husband, the police officer who then contacted me suggested I speak with a PSCO named Julia James – just to make sure the children and I were safe. 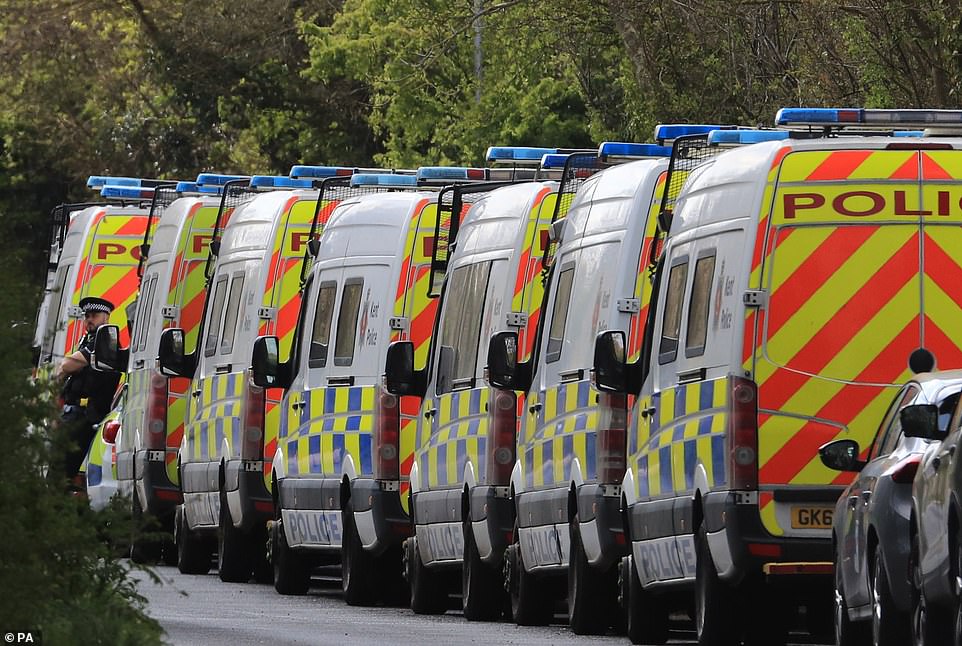 Ms James went missing while walking her beloved Jack Russell Toby near to her home in Snowdon, Kent, last month. She was later found dead by members of the public in nearby Akholt Wood on Tuesday, April 27. Pictured: Police at the scene last month 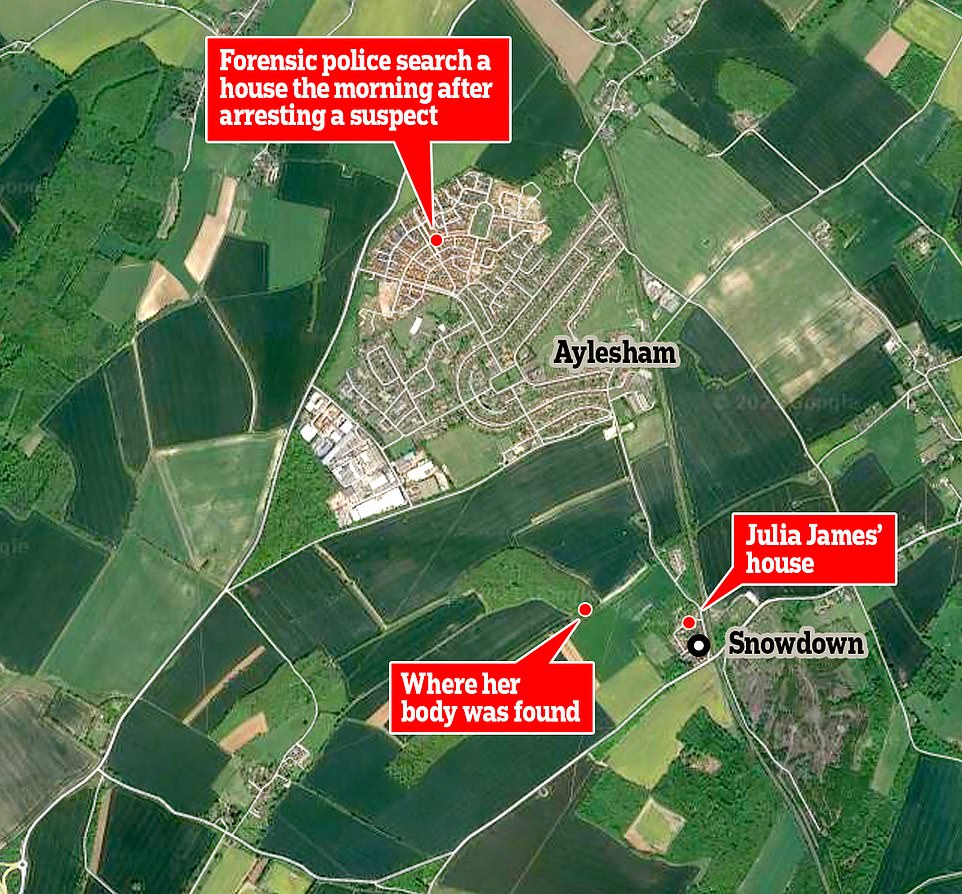 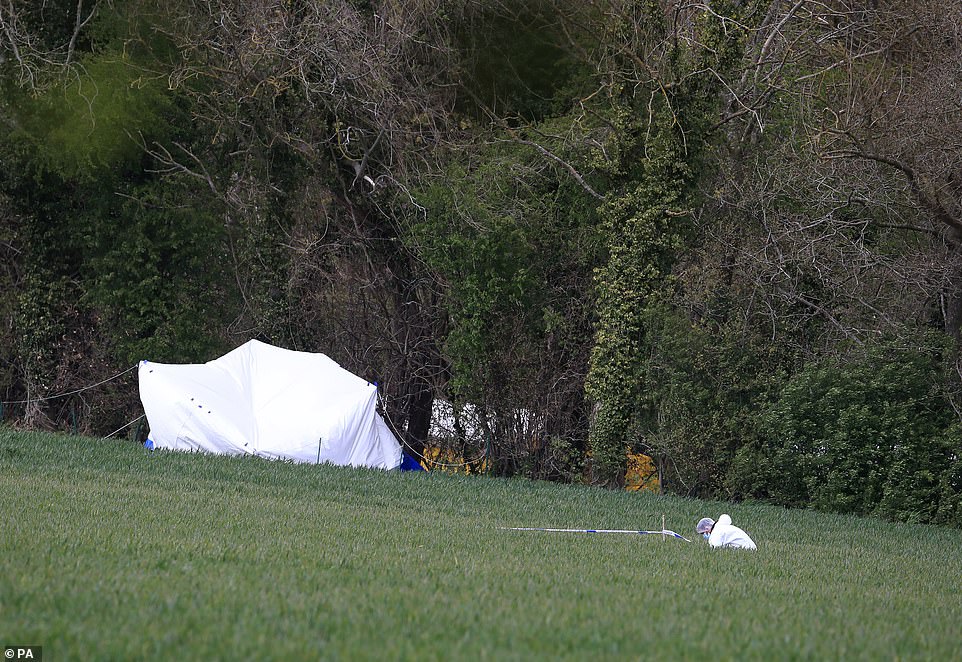 Police forensic officers search of fields close to the hamlet of Snowdown, near Aylesham, following the death of Julia James

‘From the first words Julia spoke, I knew she was someone I could trust.

‘She was a force of nature – calm, kind and reassuring when things were at their worst, and most of all completely focused on making sure that my children and I were safe.

‘I didn’t tell Julia much about my story the first day, and said I intended to go back home when things calmed down – my husband just had a bad temper.

‘Julia kept in touch that first week, calling a number of times and suggesting we go through a confidential questionnaire.

‘The questionnaire was a real eye opener for me – initially I chose not to answer all of the questions, but as Julia explained the meaning of each one to me on the phone, it gradually started to sink in that the way my husband had been treating me and our children over the past few years was not ok.

‘It was serious physical, verbal and emotional abuse. Julia never judged me or my situation, nor did she tell me what to do.’

She added that, in her role as a PCSO, Mrs James would have helped ‘hundreds if not thousands of domestic abuse survivors with stories like mine and even far worse’.