Hunters star Jonno Davies is set to play a younger incarnation of Robbie Williams in an upcoming musical biopic about the singer.

The actor, 29, who has also appeared in series such as Casualty and Holby City, took to Twitter to confirm he’d be playing the iconic singer alongside a star-studded cast that included Steve Pemberton and Alison Steadman in Better Man.

Re-posting an article confirming the film’s cast, Jonno wrote: ‘I’m playing Robbie Williams in his musical biopic Better Man, alongside an incredible cast and the legend himself; all beautifully directed by Michael Gracey. Bloody hell.’ 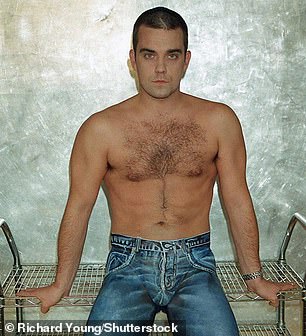 He’s got the part! Hunters star Jonno Davies (left) is set to play a younger incarnation of Robbie Williams (right in 1998) in an upcoming musical biopic about the singer

Better Man, which has already begun filming in Australia, is being directed by Michael Gracey who helmed The Greatest Showman.

Jonno is best known for his role as Alex DeLarge in the stage production of A Clockwork Orange which toured Norway and Singapore.

He went onto revive the role at London’s Parkland Theatre in 2017, before moving to the US for its Broadway debut.

Exciting! Jonno confirmed the news of his casting on social media 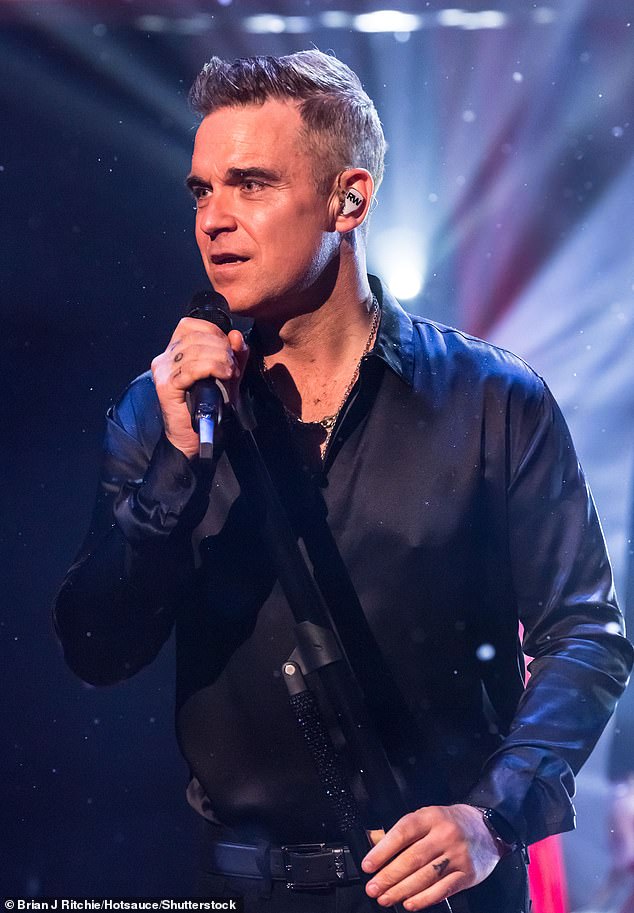 Anticipated: Robbie (pictured in 2020) is set to play himself during the latter years of his career for the biopic, which has already begun filming

Jonno went onto star in the Olivier Award-winning production of Shakespeare in Love at London’s Noel Coward Theatre, and in 2020 starred opposite Al Pacino in the Prime Video series Hunters.

A Better Man will boast a slew of UK stars including Inside No. 9’s Steve, Gaving and Stacey star Alison, Damon Herriman, Kate Mulvany and Anthony Hayes.

It comes after Robbie confirmed that he will also play himself in the film, after producers struggled to cast an actor in the coveted role. 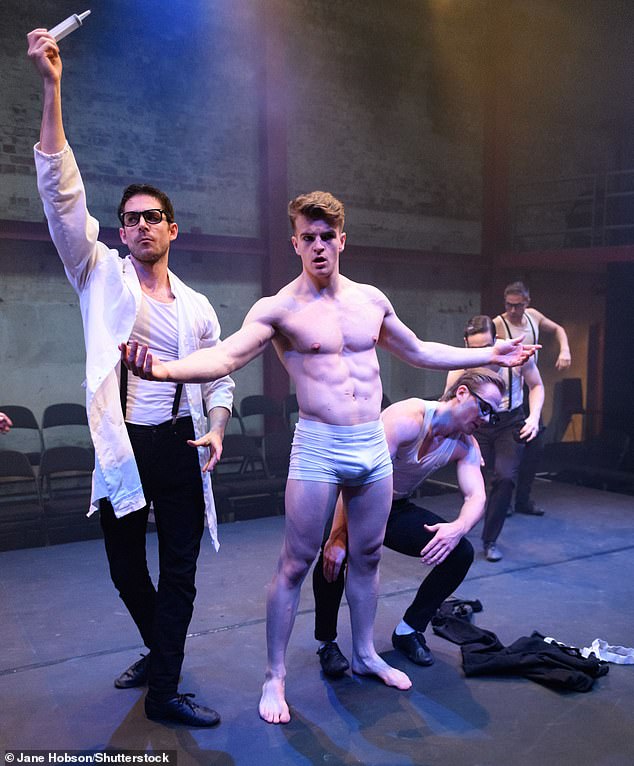 Hunky: Jonno is best known for his role as Alex DeLarge in the stage production of A Clockwork Orange, performing in both the West End and Broadway runs

According to The Sun, he told the crowd at the Rob Laver Arena in Melbourne last week at a gig to celebrate the filming of the biopic: ‘The thing is about films is that it is a wonder anything gets made.

On trying to find the perfect actor to play Robbie, an insider told the Mirror  in March: ‘Michael and Robbie held top-secret auditions to find a star to play the young Robbie recently.

‘They didn’t meet anyone they were confident could pull it off. 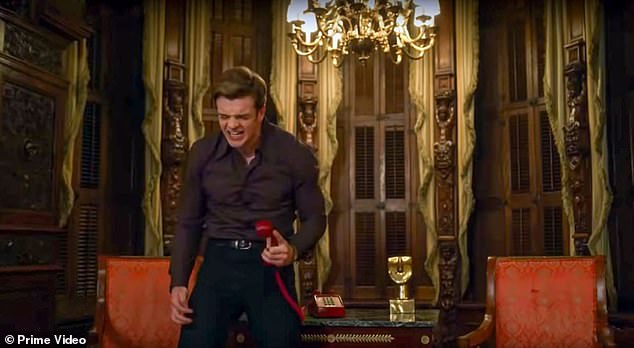 Screen star: In 2020 he starred opposite Al Pacino in the Prime Video series Hunters

‘Robbie is stunned at how difficult the project has been to get made. And now he’s starting to worry it’s never going to make it to the big screen and he’ll look foolish for hyping it up.’

Sources say Hollywood is excited about the movie following the success of other singer’s lives captured on film such as Elton John’s Rocketman and Queen’s Bohemian Rhapsody.

Insiders believe it could help Robbie crack America, after struggling to make it big across the pond – despite success in Europe when he first went solo after leaving Take That.

A source previously told the Mirror: ‘Early indications are that it may really cut through to US audiences, not least as the people in place on it have such pedigree.

‘Movie chiefs think the script – essentially a stirring story about an underdog catapulted to fame – will really resonate with people, even those in America who may not know much about Robbie himself.’ 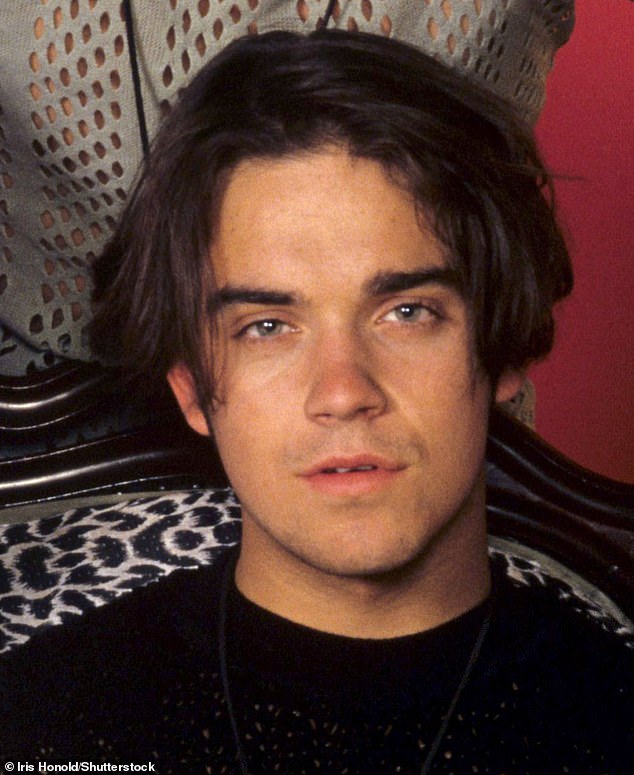 In the works: It comes after Robbie confirmed that he will also play himself in the film, after producers struggled to cast an actor in the coveted role

It was announced in December, producers would begin filming at Docklands Studios in Melbourne in early 2022.

‘To tell Robbie William’s beautiful, distinct story, back home, in my own city, is a dream come true,’ Gracey said in a statement.

‘There is a creative energy that burns across the Melbourne film industry, and I know this movie will thrive here.’

Michael said the film will not be like Rocketman or Bohemian Rhapsody, which were about musical prodigies that the world had to catch up to.

He described Robbie as an ‘everyman’ who has an ‘incredibly relatable story’ about following your dreams.

Robbie found fame as a teenager as a member of Take That and found wider success when he went solo in 1996.

Michael confirmed Robbie’s music will be re-recorded for the film and producers will be looking for a studio to buy the movie at the upcoming European Film Market event. 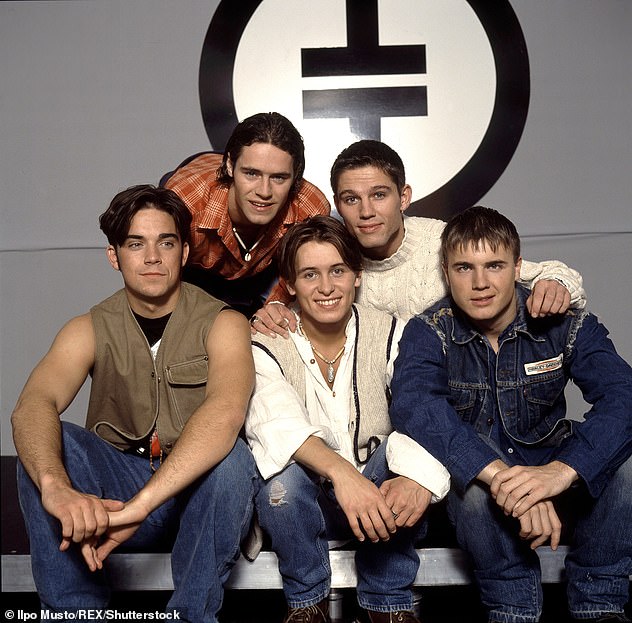 Iconic: Robbie rose to fame with Take That who formed in 1989 and went on to achieve 12 number one singles on the UK Singles Chart along with eight number one album (pictured 1993)