The New Joint Partnership Council that will settle UK-EU trade disputes will be co-chaired by a UK minister and an EU representative.

The mysterious mediation body will be set up on January 1 to act as a point of call for any issues between Britain and EU member states.

A 1,255-page document has now shed some light on the makeup of the body, which will have representatives from both the EU and the UK.

Members of the council will have the power to vote on amendments to the Brexit deal in the future, impose tariffs, make sure the agreement is adhered to and establish a list of individuals to join an arbitration tribunal.

The tribunal will be made up of five experts from the UK, five from the EU and five independent specialists in various fields from outside both jurisdictions. It will rule on matters of disaccord between the EU and Britain.

Its chair will be chosen from the five independent members.

The mediation body will be set up on January 1 to act as a point of call for any issues between Britain and EU member states. Pictured, Boris Johnson speaking to the President of the European Commission Ursula von der Leyen from his desk at Number 10 It is the tribunal that will have the power to agree on imposing tariffs on either the EU or the UK if it is felt one of the parties has failed to follow the terms of the trade deal.

The council itself will sit at least once a year alternately in Brussels and the UK. It will have two co-chairs – one from the UK and one from the EU – and a Secretariat will be responsible for all correspondence between the two parties.

The document reads: ‘The Partnership Council shall be co-chaired by a Member of the European Commission and a representative of the Government of the United Kingdom at ministerial level.

‘It shall meet at the request of the Union or the United Kingdom, and, in any event, at least once a year, and shall set its meeting schedule and its agenda by mutual consent.’

It means there is no longer a role for the European Court of Justice and the UK is effectively cut off from the union.

The document added: ‘Co-chairs may, by mutual consent, invite experts (i.e. non-government officials) to attend meetings of the Partnership Council in order to provide information on a specific subject and only for the parts of the meeting where such specific subjects are discussed.’

The council will also have various subcommittees to manage different aspects of the treaty.

Boris Johnson previously said ‘independent third party arbitration’ would be used if either side felt it was being ‘unfairly undercut’ by the other. 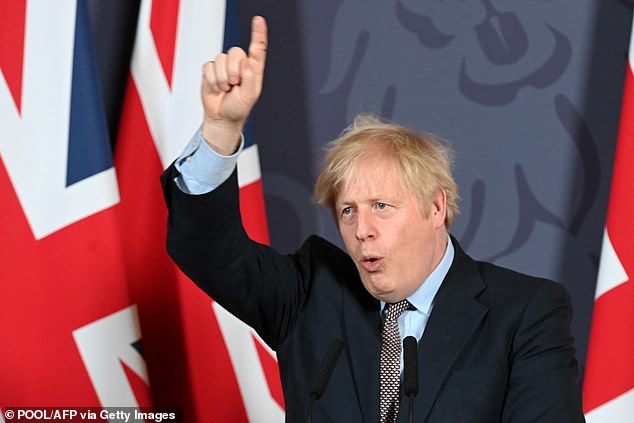 It a signal of the Prime Minister following through on a commitment of the Brexit campaign to remove Britain from the EU’s legal sphere of influence.

Under the deal announced on Christmas Eve there will be zero-tariff, zero-quota access to the EU single market – and Mr Johnson has maintained the ability to diverge from Brussels standards, with no role for the European Court of Justice.

Disputes will be settled by the independent arbitration panel, similar to the structures already in the Withdrawal Agreement and those commonly used in international trade situations.

In a Downing Street press conference this week, Mr Johnson said: ‘In the context of this giant free trade zone that we’re jointly creating the stimulus of regulatory competition will I think benefit us both. 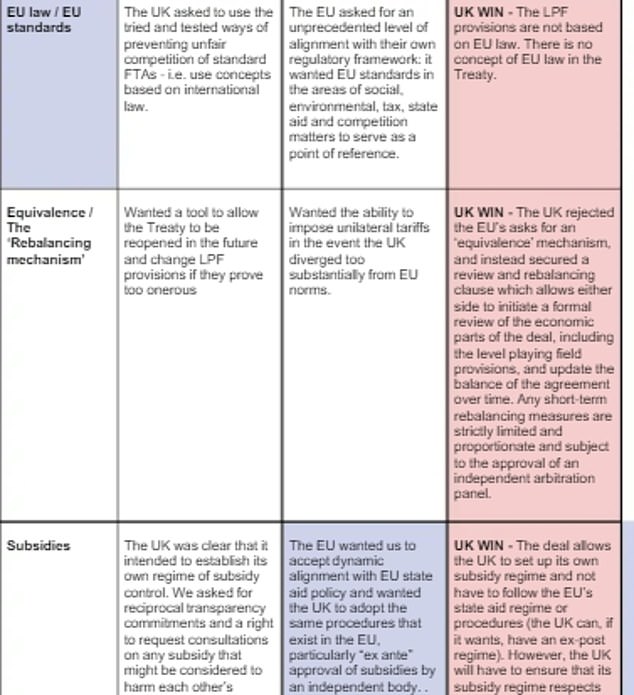 Under the deal announced on Christmas Eve there will be zero-tariff, zero-quota access to the EU single market – and Mr Johnson has maintained the ability to diverge from Brussels standards, with no role for the European Court of Justice

‘The UK rejected the EU’s asks for an ‘equivalence’ mechanism, and instead secured a review and rebalancing clause which allows either side to initiate a formal review of the economic parts of the deal, including the level playing field provisions, and  update the balance of the agreement over time.

‘Any short-term rebalancing measures are strictly limited and proportionate and subject to the approval of an independent arbitration panel.’ 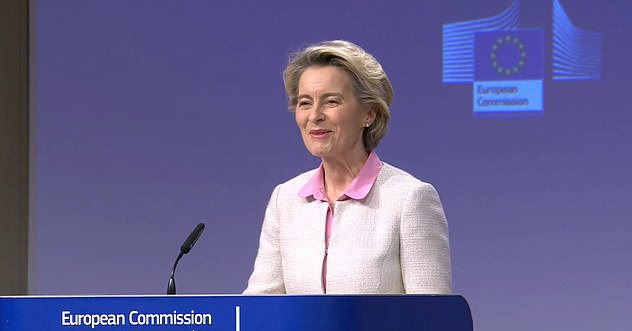 Asked at a Brussels press conference how the EU will make sure the UK will stick to its side of the agreement, Ms Von der Leyen said: ‘We have strong measures that can be taken if one party does not play by the rules’

Asked at a Brussels press conference how the EU will make sure the UK will stick to its side of the agreement, Ms Von der Leyen said: ‘We have strong measures that can be taken if one party does not play by the rules.