If you like walking and the knees don’t give you grief, the Camino de Santiago is right up your street. Think of it as gentle fell walking in the Lake District – but instead of the rain, there is glorious Spanish sunshine on your back.

Also known as the Way of St James, or the Way, this former pilgrim walk will change your life – I promise. You’ll meet people from across the world, see pleasant countryside, lose a pound or three in weight, learn more about yourself (good and bad) and end up at the awe-inspiring Cathedral of Santiago de Compostela in Spain’s north-west region of Galicia.

Some believe the Camino should only be tackled from one of the starting points that take you over the Pyrenees (Saint-Jean-Pied- de-Port, for example). I say fine. If you’ve got time on your side – and like heights – do it.

However, the last leg of the pilgrimage – from Sarria to Santiago – is 71 miles long, fulfilling and still qualifies you for a well-earned certificate at the end. If you like it, you can come back for more.

A step ahead: Jeff Prestridge hiked along the Sarria to Santiago section of the Camino trail. On the way, he stopped in Portomarin (above), to dine on a bargain set menu

It’s the route I took and it’s the Camino option most people choose: old and young, Spaniards and international tourists. They don’t have time for more. And although there are hills, they’re manageable – but hiking poles help.

Many young people do Camino by staying at cheap albergues de peregrinos (pilgrim hostels) that are found everywhere along the route. Youth hostels, to me and you.

My choice, an increasingly popular one, was to use a specialist travel company (Macs Adventure) to book accommodation and arrange for my luggage – one bag only – to be transported each day to the next hotel.

Having used them when I did the UK Coast to Coast walk in 2012, I knew they were good, and they still are. 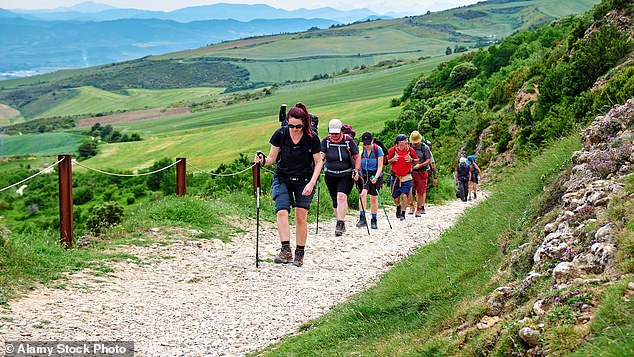 ‘Some believe the Camino should only be tackled from one of the starting points that take you over the Pyrenees,’ says James. Above are pilgrims climbing the mountain range’s Alto del Perdon peak 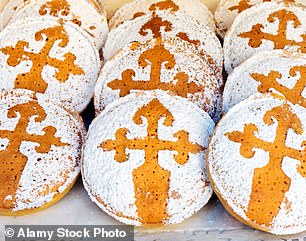 My journey started in Sarria on a Sunday morning, following a night with little sleep – a result of a right ding-dong of a wedding reception on the ground floor that went on until dawn (with firecrackers announcing festivities were over!).

After a recce of Camino the day before, I knew what to look for: yellow arrows and signs in the shape of a scallop’s shell. It didn’t stop me getting lost, with only angry farm dogs preventing me from veering too far off course.

It’s quite difficult, however, to go too wrong because from April to September, the route is busy.

The fauna is green, and the eucalyptus trees are spectacular, soaring spiritually to the heavens. Modern roads have disrupted parts of the pilgrim’s route, but there are underpasses and bridges to negotiate the busiest.

There are churches aplenty – many quite splendid. And cafes galore to gulp down fresh orange juice and top up on Cortado coffee. 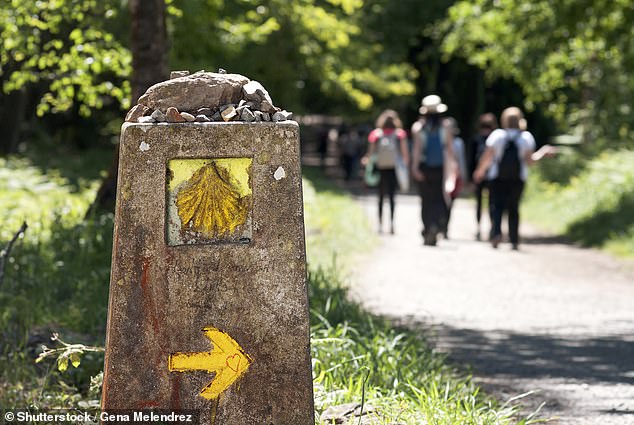 ‘For all the therapeutic countryside and tasty food, it’s fellow Camino “pilgrims” who make this journey special,’ says Jeff 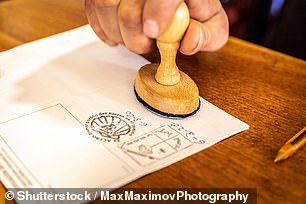 The hotels are good. My favourite was in Palas de Rei, where I stayed in a house owned by three sisters in their 80s.

Guests sat around the breakfast table of a morning and were treated to poached egg on a bed of potato and onion. ‘Camino Egg,’ it’s called. Delicious. I dreamt about it the next night.

Galician food is rustic and cheap. In Portomarin, I spent €11 on a set menu comprising chick peas and tripe (interesting, taking me back to my offal-laden days as a child) and veal chops. For an extra €2, I got bread that threatened my implants, a pineapple tart and a jug of hearty red wine.

If you like chorizo, this is the place to come, although my favourite meal was just outside A Rua. There I had Galician soup, a juicy leg of chicken and St James almond cake – again washed down with a jug of red wine. With a pre-meal beer, it came to €16. True value for money.

But for all the therapeutic countryside and tasty food, it’s fellow Camino ‘pilgrims’ who make this journey special.

Although I spent considerable time walking solo, I met interesting people. For example, a lovely Mexican opera singer, Claudia, who had sung Ave Maria in the Palas de Rei church the previous evening. Her Camino adventure was triggered by her 15-year-old daughter going off on summer camp, giving her an opportunity to have some ‘me’ time after divorce. A spiritual journey for her, like many others. 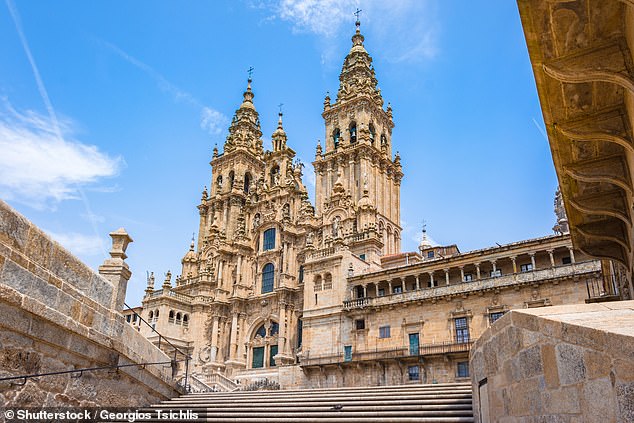 ‘I shed a tear as I first cast my eyes on the cathedral,’ Jeff says of the Cathedral of Santiago de Compostela (above), which marked the end of his hike

Jeff Prestridge was a guest of Macs Adventure (macsadventure.com), which offers an eight-day self-guided Sarria to Santiago itinerary from £625pp on a B&B basis. Flights and transfers extra.

Then there was Mohita, a formidable 39-year-old biotech expert working in Canada. I walked with her for six miles and got her life story: arranged marriage, divorce, business success – but as yet her quest for lasting love has remained unfulfilled.

As we walked, she received videos from young men she had met on Camino. Judging by these, suitors will not be thin on the ground. I left her feeling exhausted and rather old, although amazingly I bumped into her again in Santiago de Compostela.

Was I better for the experience? Yes, I’ve seldom felt happier. I shed a tear as I first cast my eyes on the cathedral three miles away, as I diverted to look at a sculpture of the pilgrims entering the city some one thousand years ago. Tiredness? Emotion? A bit of both.

Although it took a while to get into the cathedral offices to have my Camino ‘passport’ checked (it must be stamped at least twice a day at cafes and churches along the way to prove you’ve done it), I was euphoric. And if I can do it at my senior age, I would put money on it that you can too. Buen Camino.