Fans of the Hollywood star targeted his ex-wife after a judge ruled that Depp was violent during their relationship.

They have bombarded Ms Heard with messages telling her that they wish her dead.

One tweet said: ‘#AmberHeardisAnAbuser you big b**** I hope you burn in hell for everything you’ve done… #JusticeForJohnnyDepp Johnny is an amazing guy that deserves more. AMBER HEARD YOU’RE GONNA PAY FOR THIS!’

Another of the Pirates Of The Caribbean star’s fans, who describe themselves as ‘Depp Heads’, wrote: ‘I hope Amber Heard gets f***ing hit by a bus and dies because what the F***.’ In one particularly callous attack, an online troll wrote about Ms Heard’s later mother Paige Parsons, who died earlier this year: ‘If your mother could see what you do she’d be glad to die.’

Ms Heard, 34, has been inundated with online abuse since she first made her claims about Depp, 57, beating her during their time together.

Those close to the Aquaman actress say that she has struggled to deal with the abuse over the past two years, with one telling The Mail on Sunday: ‘It is just so gross and it has taken its toll in a way you wouldn’t believe.’

In August, Ms Heard filed court papers where she says her ex-husband ‘spearheaded’ a professional trolling campaign against her and allegedly arranged for her to be ‘drowned with online attacks’ during their domestic abuse case at London’s High Court.

She also claimed – in US legal documents, which are part of a counter claim filed in Virginia where Depp is suing her for defamation – that the star and his former lawyer Adam Waldman tried to ‘harass and damage’ her during the three-week libel trial. 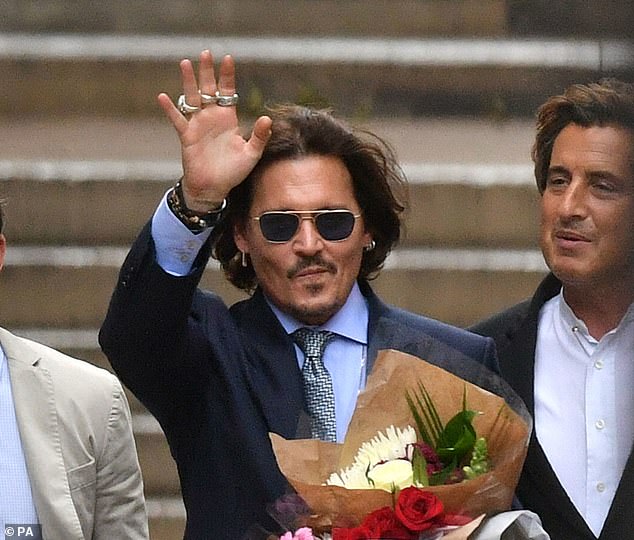 In August, Ms Heard filed court papers where she says her ex-husband ‘spearheaded’ a professional trolling campaign against her and allegedly arranged for her to be ‘drowned with online attacks’ during their domestic abuse case at London’s High Court

Last Monday, judge Mr Justice Nicol ruled that The Sun newspaper’s report that he was violent towards Miss Heard was ‘substantially true’.

And on Friday he was forced to quit his role in Fantastic Beasts 3, a Harry Potter spin-off written by his friend J. K. Rowling.

In a statement, Depp confirmed that he plans to appeal against the ruling.

In You magazine today, Little Mix star Jesy Nelson says trolling has put her off being a mother.

The 29-year-old, who attempted to take her own life in 2013 after attacks on social media, said: ‘It makes me not want to have a kid. Those insecurities that we all have now because of social media – imagine having that embedded in you as a child?’

She said the band never worried about weight until they found fame on The X Factor in 2011 and were hit by online attacks.

Miss Nelson last night pulled out of the finale of BBC show Little Mix The Search due to an unknown illness and will miss hosting MTV’s Europe Music Awards tonight.