Sir Mark told The Times that the accusations made by Amber Heard against Depp were not consistent with the Pirates of the Caribbean star’s ‘character.’

Depp, 57, is awaiting the High Court’s judgment in a libel action against The Sun newspaper for an article which labelled him ‘a wife beater.’

Heard, 34, who met Depp during filming of The Rum Diary in 2011, told the court that her former husband had subjected her to a campaign of abuse.

Depp denies the claims and says his ex-wife was violent towards him.

Sir Mark Rylance and Johnny Depp pose during a photocall to present the movie Waiting for the Barbarians during the 45th Deauville US Film Festival, on September 8, 2019 in Deauville, France

Sir Mark, 60, who is starring alongside Depp in new movie Waiting for the Barbarians, told The Times: ‘My impression of him was a very loving, and very sensitive and very trustworthy person.’

He added that Depp was ‘intensely, intensely, shy.’

‘The accusations that were around at the time we were making the film were of physical violence,’ Rylance told the paper.

‘And he obviously denied this and I found his denial completely believable. It didn’t seem to be part of his character at all.’

Rylance plays a magistrate in an unnamed colonial outpost seeking an easy retirement in the film adaptation of JM Coetzee’s 1980 novel of the same name.

He begins to question where his loyalties truly lie with the arrival of the sinister Colonel Joll, played by Depp. 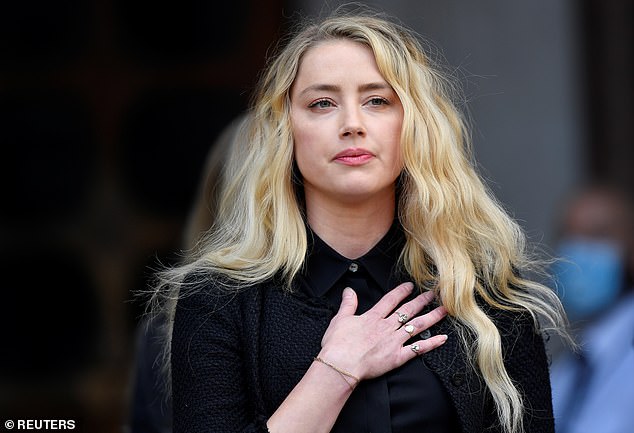 Earlier this week Rylance told the Radio Times: ‘With these stars, you read things, you hear things and I wasn’t sure what it would be like, whether he would be vain, or shattered, or broken by the things that he’s gone through. But it wasn’t like that at all.

‘I’ve never, ever heard him say a bad word about anyone. All his stories are loving and amusing.’

Depp, who gave days of vivid evidence at the High Court in July, is already suing Heard for $50 million in the US over a column that she wrote for the Washington Post in December 2018.

While the article did not mention Depp by name, Heard described herself as ‘a public figure representing domestic abuse’ – which his lawyers argue had the effect of falsely portraying him as violent.