Snooker star John Virgo led the tributes to Willie Thorne at an emotional memorial service held in Spain today as his son revealed he will be buried back in the UK.

More than 80 people packed a community centre to say farewell to the 66-year-old who died last week while undergoing treatment for leukaemia.

Neither his ex-wife and former Miss GB Jill Saxby, who revealed last week that they spoke ‘every day’ before his death, or celebrity friends such as Gary Lineker and Steve Davis could be there due to Covid travel restrictions.

Instead Virgo joined Thorne’s twin sons Tristan and Kieren and daughter Thali at the Cristo Resucitado Ecumenical Centre in Alicante.

Standing next to a large floral tribute spelling out ‘Willie’ and a black and white photograph of the star in his heyday, Virgo fondly remembered their days together on the BBC TV series Pot Black.

He said: ‘When we were doing Pot Black they were looking for a good looking player, and Willie beat me to it. It was Willie who was the good looking one.

Snooker star John Virgo led the tributes to Willie Thorne at an emotional memorial service held in Spain today as his son revealed he will be buried back in the UK. More than 80 people packed a community centre to say farewell to the 66-year-old who died last week while undergoing treatment for leukaemia 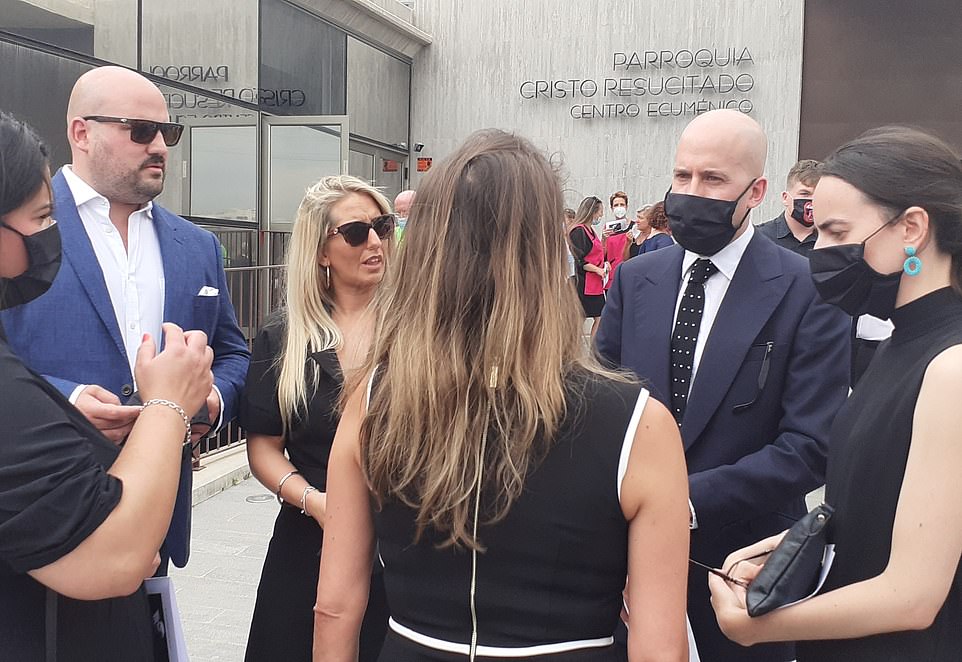 Snooker players Willie Thorne (left) and John Virgo during their first round match at the World Snooker Championship at the Crucible Theatre, Sheffield, April 1983. Thorne won 10-3 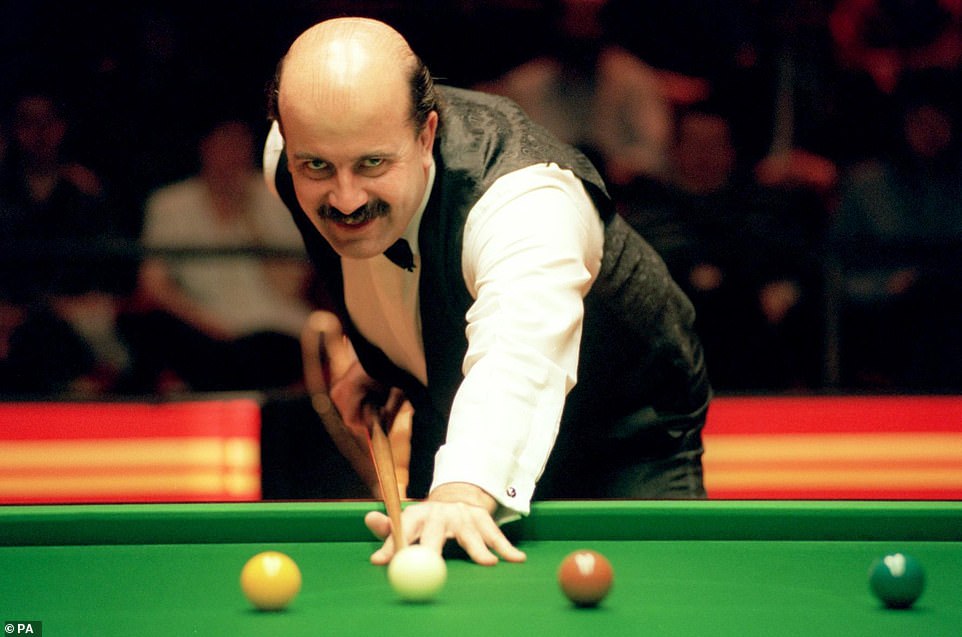 The 66-year-old (pictured in 1994), who announced he was battling leukaemia in March, was taken to hospital with a dangerously low blood pressure

‘Willie will be a great loss to those he has left behind. We will miss his jokes, and he could joke could Willie. Back in the days when we started out as professional in snooker it was different to what it is now.

‘We had plenty of spare time and that lead to betting, gambling. And that made it difficult, but Willie was a soft hearted man. Myself, Jimmy White and Steve Davis have all said to each other that we can’t believe we will never see him again.

‘I cannot believe that I am here today at the church, saying all this. RIP Willie. You will never be forgotten.’

The memorial service was overseen by Pastor Keith Brown, who read a poem for Thorne’s children: ‘When tomorrow comes without me…I know how much you love me and you know how much I love you.

‘Don’t think we are far apart. I am with you in my heart.’

The star retired from competitive snooker in 2001 having been once rated the 7th best in the world which earned him the nickname Mr Maximum (pictured: The memorial service)

His friend Julie O’ Neill, who looked after Thorne during his final three months, sang the song Dancing in the Sky. 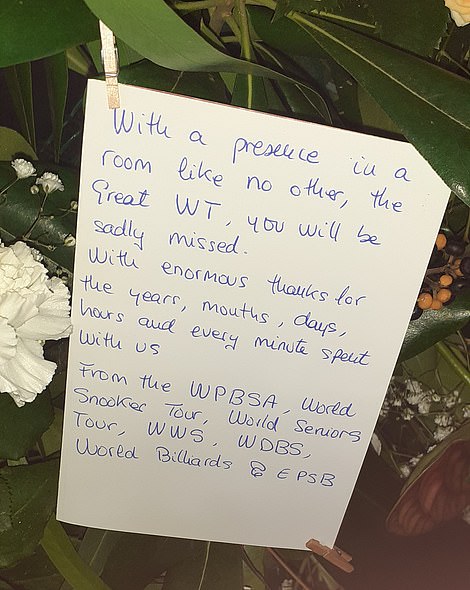 A note left at the memorial for Willie Thorne, who died last week while undergoing treatment for leukaemia

She also read an eulogy and the opera song Nessum Dorma was also played at the opening of the ceremony.

After the service Kieren revealed that his father’s coffin was to be flown back to the UK where he will be buried at a later date.

Thorne, who competed in 2007’s Strictly Come Dancing, moved to Spain last year with a view to staging exhibition matches and passing on his skills on the green baize to young players.

His 24-year marriage to Saxby ended due to his gambling addiction and she moved back to the UK.

Thorne had been diagnosed with leukaemia in March and undergone chemotherapy.

With his money problems widely documented, fans contributed to a GoFundMe page to raise money for carers to look after him including Lineker – best man at Thorne’s first marriage and one of his closest friends – who contributed £1,000 to the fund.

Earlier this month Thorne was rushed to hospital when his blood pressure dropped and was put into an induced coma.

Medics decided to turn off his life support machine after consultation with his family.

The star retired from competitive snooker in 2001 having been once rated the 7th best in the world which earned him the nickname Mr Maximum. 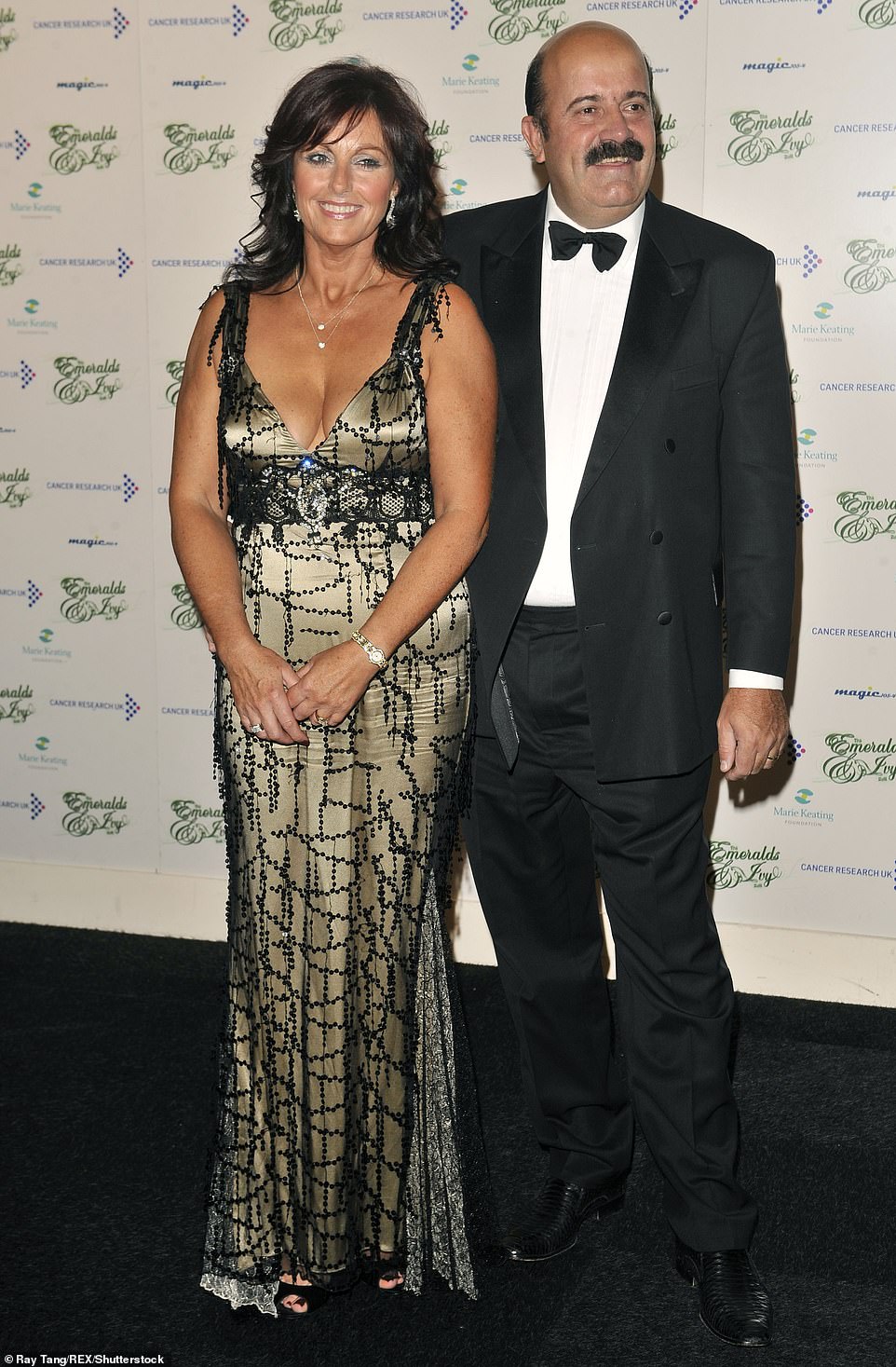 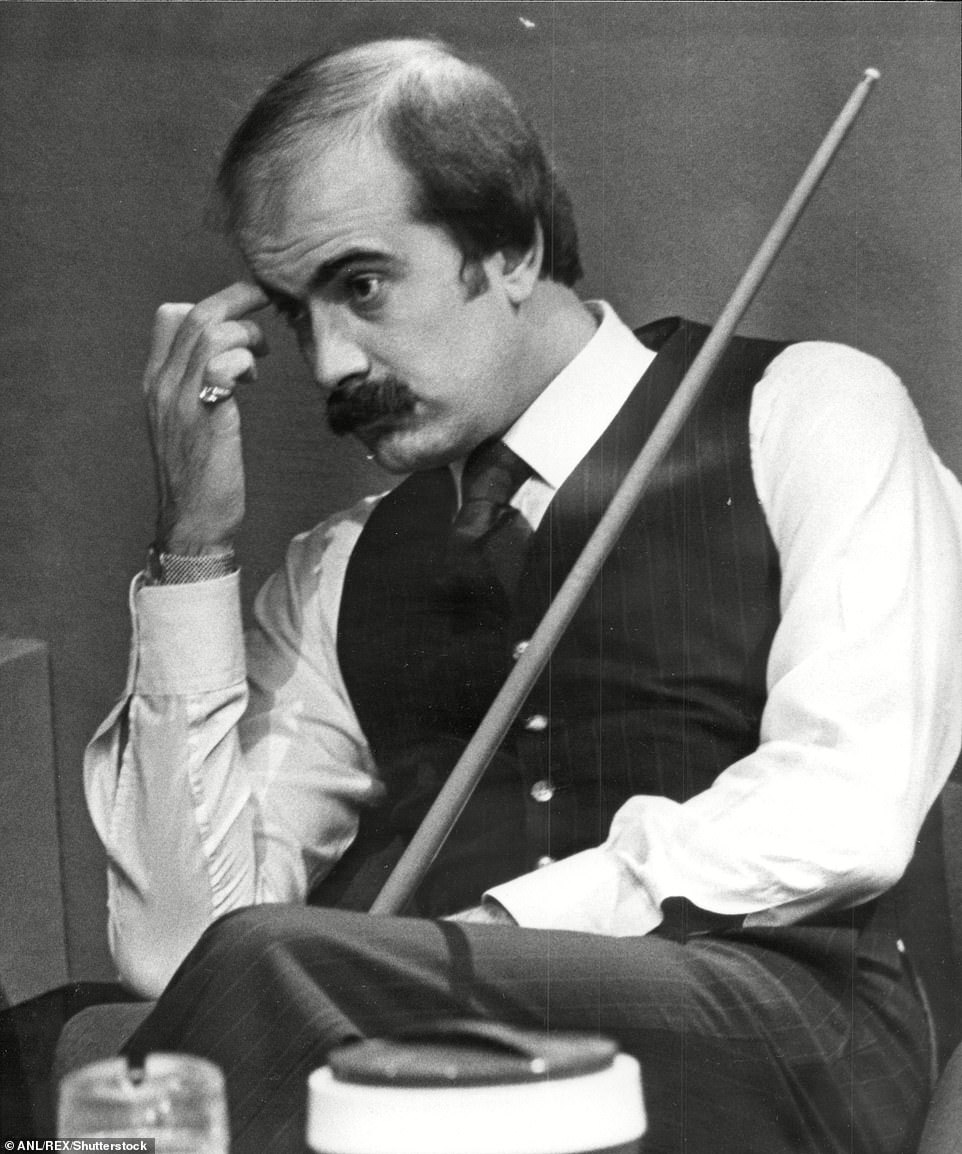 Thorne (pictured when he first got into the game) reached two World Championship quarter-finals and won his only ranking title, the Mercantile Credit Classic, in 1982

His close friend of 30 years British golfer Mark Roe helped contribute to the GoFundMe campaign with part of the money being used to pay for the memorial service.

He said: ‘The GoFundMe was hoped to take the financial pressure off him and to help him get through leukaemia while he was stuck in bed. I did whatever I could do.’

Roe, 57, a former European Tour player, said: ‘Willie, who I called ‘Big Willie’ was a lovely man. I’ve had some great times with him. I always loved my snooker and Willie loved his golf.’

Willie Thorne dies aged 66: How troubled snooker star nicknamed ‘Mr Maximum’ was one of the sport’s most famous names but later struggled with bankruptcy and gambling addiction 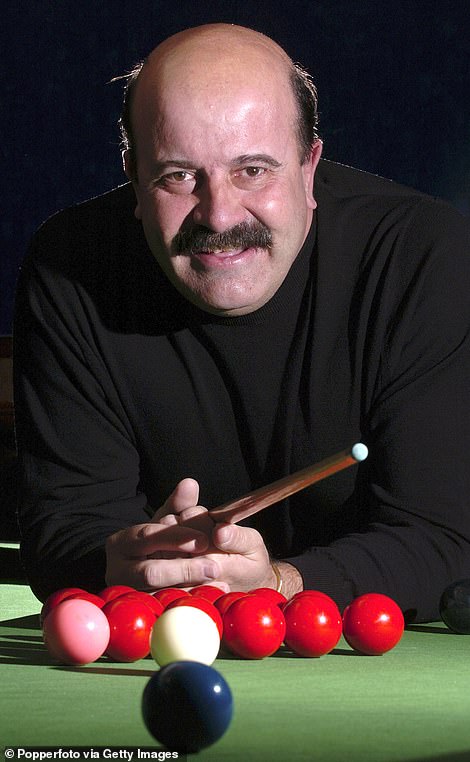 Willie Thorne is pictured at The Belfry in Sutton Coldfield, Birmingham, in 2004

A famous missed blue and a long-standing battle with bankruptcy serve as ill-fitting epitaphs for a snooker player who was a mainstay in the top echelons of the game during its unprecedented peak.

Willie Thorne, who died at the age of 66, was once afforded a place in Chas ‘n’ Dave’s ‘Matchroom Mob’, which hit the charts with the song ‘Snooker Loopy’, lamenting: ‘Old Willie Thorne, his hair’s all gawn…’

Yet alongside Tony Meo, Thorne was one of only two members of the group who failed to clinch one of his sport’s major titles.

He was haunted by his error in the 1985 UK Championship final against Steve Davis, when, leading 13-8 and on the verge of extending his lead to within two of victory, he missed the simplest of blues off its spot.

Writing many years later, Thorne admitted: ‘I went back to my seat and the doubts kicked in straightaway. I was still 13-9 in front, but all I could think about was the way I’d failed in big games in the past.’

Thorne, who was born in Leicester on March 4, 1954, only started playing snooker at the age of 14 but within two years had been crowned national under-16 champion.

Swiftly turning professional, he came to be regarded as one of the sport’s finest break builders, and would go on to become only the third player to secure 100 competitive centuries.

Thorne reached his first of two World Championship quarter-finals in 1982, where he pushed the eventual champion Alex Higgins, and three years later, just three months before his painful loss to Davis, he won his first and only world ranking title, beating Cliff Thorburn to lift the Mercantile Credit Classic.

But Thorne was already struggling with a gambling addiction, and his run to the UK semi-finals in 1987 – where he was crushed 9-2 by Davis – represented the final major success of a generally unfulfilled playing career.

Thorne revealed the extent of his gambling issues in an interview with the Guardian in 2004, recalling an incident in which he placed a bet of £38,000 on John Parrott losing a game, because he had lost his cue.

Thorne was commentating on the game for the BBC, and admitted: ‘I put £38,000 on Parrott to lose because he didn’t have his cue, but he ended up winning the bloody game.

‘I’m having to close the commentary by saying it’s unbelievable, spewing up as I say it.’

Thorne, who worked as a BBC commentator for 30 years, later revealed he lost £1million to gambling in his career. He was declared bankrupt in 2016.

He remained a familiar figure within the sport and competed in the BBC’s Strictly Come Dancing in 2007 with partner Erin Boag, being voted out in 12th place.

A keen Leicester City fan and long-time close friend of Gary Lineker, Thorne announced he was beginning treatment for leukaemia in March 2020.

He died at the age of 66 having being placed into an induced coma in hospital in Spain after suffering respiratory failure.

Lineker was one of the first to pay tribute, describing Thorne as ‘one of life’s great characters’ who had ‘potted his final black much too soon.’