John Lewis could close eight more of its remaining branches, with larger older shops most likely to close for good, it is claimed.

The department store could shut a fifth of its 42 remaining stores, as negotiations with landlords continue and hundreds of jobs are put at risk, The Sunday Times reports.

Any announcement of closures is expected to take place alongside the company’s annual results on March 11.

The news follows the closure of eight John Lewis stores, including John Lewis’ flagship Birmingham store, and the loss of 1,300 jobs in July last year – which was followed by a further 1,500 jobs axed from head office in November.

Prior to the pandemic Sir Charlie Mayfield, the former chairman, found that 20 of its department stores were no longer viable – the company predicts 70 per cent of its sales will be made online by 2025, the Mirror reports.

The John Lewis Partnership, which also owns Waitrose, is trying to save £300million per year in the wake of the virus to secure its long-term future.

The job cuts announced in November represented almost a third of its 5,000 head office staff and will help the firm save £50million a year.

It has already closed one of its two central London offices, and plans to convert excess space on the upper floors of its flagship Oxford Street floor into offices. 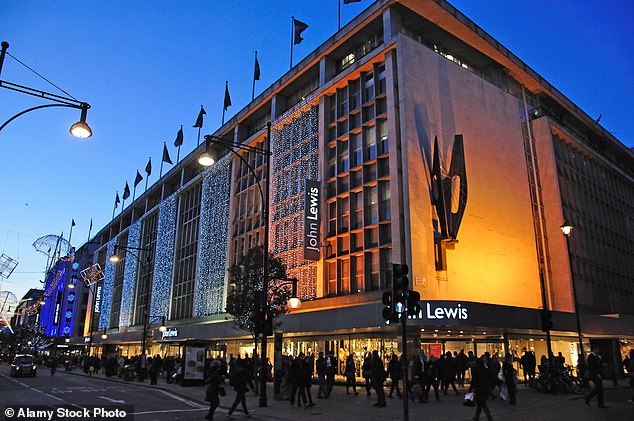 Any announcement of closures is expected to take place alongside the company’s annual results on March 11.  John Lewis department store, Oxford Street, London

Chairman Sharon White said in November: ‘Losing partners is incredibly hard as an employee-owned business. Our partnership plan sets a course to create a thriving and sustainable business for the future. To achieve this we must be agile and able to adapt quickly to the changing needs of our customers.’

Department stores have been hit hardest as shoppers turn to online competitors, especially to buy clothes and electrical items. Retailers are also battling a storm of rising staff costs, rents and business rates.

John Lewis’s ‘never knowingly undersold’ pledge has also come under scrutiny as heavy discounting elsewhere on the high street has forced it to lower prices.

It said fashion, make-up and skincare ranges performed well over the Christmas period.

But sales were dragged down by the home, electricals and home technology markets, which bosses partly blamed on low consumer confidence.