In April 2022, I suffered a horrific incident.

After I’d driven my children home from school, our Mercedes C220 caught fire while on the driveway and caused £20,000 worth of damage to my home.

I claimed on my home insurance with John Lewis, but it will only agree to pay £10,000 for the repairs. I am a single mother and cannot afford to meet the shortfall.

Shortfall: John Lewis only offered to pay £10,000 for repairs after a car fire caused £20,000 worth of damage to a reader’s home

You had just parked your eight-year-old Mercedes in your driveway when your ten-year-old got out of the car and shouted: ‘Mummy, the car’s on fire!’

You rushed indoors to grab a fire extinguisher but unfortunately it was too late. The car fire quickly turned into an inferno and the wind started blowing clouds of acrid smoke onto the front of the house.

The fire brigade arrived after 20 minutes, by which time the car had burned and sunk into the Tarmac driveway.

The fire caused significant damage to your home. The kitchen window was distorted and smashed, and the roof above had damaged felt, guttering and fascias. The garage doors and roof were also warped, which led to leaks.

It was fortunate that the vehicle hadn’t gone up in flames while you were driving along a busy road.

The AA, your motor insurer, paid out the claim for the destroyed car in full.

But you were frustrated by a series of roadblocks when sorting out other elements, not least the claim for damage to your home.

Soon after the incident, on the direction of John Lewis’s insurance underwriter, Royal & Sun Alliance (RSA), you invited Mercedes UK to look at the remains of the car.

You said at first Mercedes was interested, but then RSA decided not to go down this route, and the car maker told you it wasn’t going to fully examine the car after all.

You were disappointed, as you were eager to find out why the motor had burst into flames without warning.

You thought of pursuing Mercedes yourself via legal protection insurance, but found you weren’t covered and could not afford to take such action on your own.

Meanwhile, you ran into problems with the claim for repairs on your home.

RSA subcontracted your case to claims management firm Sedgwick, which, after a visit to inspect the damage to your property, suggested you get two quotes from local builders for the repairs.

This took many weeks, as few firms wanted to do the work.

Sedgwick rejected the quotes, saying they were too high and suggesting £10,000 was nearer the mark, according to its experts. You said you then asked a third builder, who also quoted £20,000, saying it wasn’t unreasonable considering that the work would involve scaffolding, digging up and disposing of the driveway, repairing the roofs and replacing the window.

After four months of getting nowhere, you contacted me. First, I approached Mercedes. Like you, I wanted to know the cause of the car fire. Plus, you were concerned that no warning light appeared on the dashboard before the engine caught fire.

I also had my interest piqued by footage you’d found online showing other C220s that had burst into flames without warning.

Mercedes said that fires can be caused by any number of factors, but since your motor insurer had settled your claim — and had scrapped the wreckage — it could not carry out a full examination.

A Mercedes UK spokesman says: ‘Unfortunately, we were extremely limited in the performance of the examination before the vehicle insurer settled the claim.’

I asked whether there had been other complaints about this particular model going up in flames but it would not comment further. Frustrating as this was, at least AA settled your motor claim relatively quickly.

However, your home insurance claim was stuck in the slow lane, so I asked John Lewis to get its act into gear and investigate why claims staff were refusing to meet your quoted repair costs.

Some weeks passed but eventually the insurer, which sent out an assessor to your home a second time and looked again at the estimates, agreed to settle the claim at £19,000, including VAT and £500 in goodwill payments.

‘This certainly isn’t the level of service we expect for our customers.’

You were pleased with this result — a payout of almost double the original offer.

While you’re disappointed that the mystery of how the car spontaneously combusted will never be solved, you are happy to draw a line under the incident — with your house repairs planned to go ahead this month. 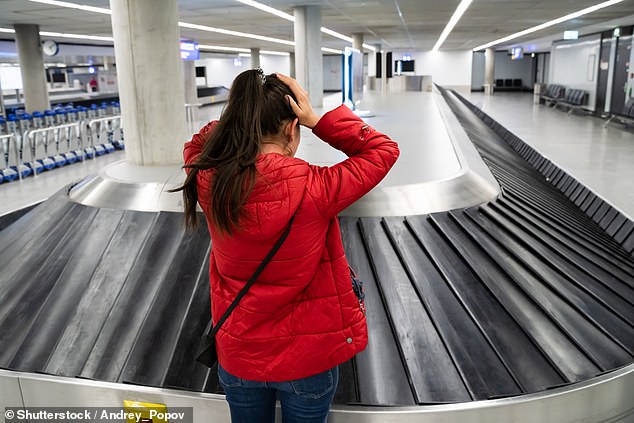 Gone missing: This reader’s wife had her bag go missing on a recent holiday to France

My wife and I flew with Ryanair from Edinburgh to Bordeaux last summer. It was a special trip to celebrate her birthday, with two nights in a chateau.

My wife had bought new clothing and cosmetics for the occasion.

However, her luggage didn’t arrive and we completed missing luggage forms at Bordeaux Airport. On each of the next 13 days we emailed Ryanair customer services for an update and received no reply.

No one could help when we returned to Edinburgh, either. I heard about a storage facility used by the airline’s baggage handlers, Swissport, for missing luggage, near Edinburgh Airport. I went there the next morning.

I found her bag, and one of the people working there said that no one from the airline had come to look for it.

On the trip, my wife bought appropriate replacement clothing, cosmetics and luggage.

She spent just over €900 and had receipts for more than €700 worth of items, with the balance being products bought at local markets, with no receipts.

We sent off the claim with the receipts and images of the items. Ryanair eventually offered us €163 with no explanation, and it has refused to pay more.

No one wants to waste precious holiday time chasing up the lost baggage department of Ryanair.

I certainly wouldn’t relish shopping for a replacement wardrobe when I had important sightseeing and leisure activities to pursue.

This seemed like an open and shut case to me: Ryanair had lost your wife’s luggage and it should pay her back for everything she had bought to replace it up to the limit it imposes.

On its website, Ryanair’s terms and conditions claim that customers can receive compensation of up to around €1,600.

These claims should be resolved within 28 days, but you say it took you more than 50 days to get your paltry offer of reimbursement.

I chased the airline on your behalf. It came back quickly and increased your reimbursement offer to €520.

This was a vast improvement but still fell short of your total claim. I asked it why.

It said it could only reimburse spending for claims where proper VAT receipts were provided — and credit card bills were not accepted.

I am sorry that I could not persuade Ryanair to cough up more, but you told me you were happy to get back three times more than you had previously been offered.

I ordered a football shirt from the website Kitbag to be delivered by Evri.

The delivery driver sent a picture of my parcel wedged into the front door of the building to my flat, leaving it ajar.

My parcel was missing when I came to pick it up an hour later.

At first Evri said this was an issue with Kitbag, but when Money Mail intervened, Evri agreed to organise a replacement kit to be sent to you, as well as a £30 goodwill gesture.

My 95-year-old mother was shielding during the pandemic and was therefore unable to use an M&S gift card she had been given.

We asked M&S to extend the card’s validity but it declined, saying that it needed to be ‘fair to all customers’.

M&S has since sent a gift card to the value of the vouchers your mother accumulated during lockdown as a gesture of goodwill.

In November, PayPal billed me £647.38 for an Airbnb transaction I never made. I’ve spent hours on the phone to PayPal, but it is still hounding me to pay the money.

PayPal investigated and a spokesman says your case has now been resolved.