Thirteen years ago, I went in search of God on Radio 4. It had the biggest response of any programme I’ve ever made, which says something about the nation’s interest in the divine.

It was a simple format: 30-minute conversations between me and the leaders of the three Abrahamic religions.

One was Jonathan Sacks, then the chief rabbi. He asked me what I hoped to get out of our interview.

‘Well,’ I said, ‘it’s simple enough. All you’ve got to do is convert me … turn me into a religious Jew.’

Jonathan laid his hand on my arm and smiled rather forlornly.

‘John,’ he said, ‘I wouldn’t dream of it. You’ve got enough problems already.’

He might have been joking but he had a point — at least as far as religion is concerned. I lost mine in a Welsh mining valley. I was a young man when I watched weeping miners digging through a mountain of coal waste for the bodies of their children, who had been crushed to death when a coal tip crashed on to their school in the village of Aberfan. 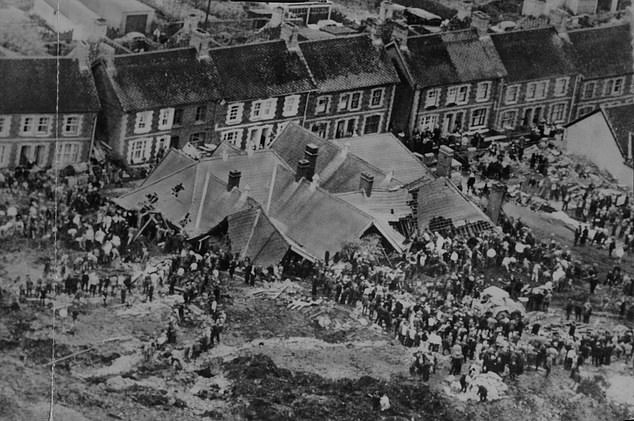 Scenes of devastation at Aberfan, Glamorgan. A mine slag heap slid into the village, killing 116 children and 28 adults

I could not reconcile the Christian belief in a merciful God with the hideous death of innocent children and a lifetime of suffering for their blameless parents. I still can’t.

But even if my faith had survived that tragedy, my belief in the Church and its leaders would have buckled over the years.

When Harold Macmillan was prime minister 60 years ago, he was attacked for some dubious behaviour by a government minister and was heard to say: ‘If you want morality, dear boy, go and ask the bishops!’ It is inconceivable that we might hear that today.

Only hours after the untimely death of Lord Sacks was announced, the Independent Inquiry into Child Sexual Abuse announced its devastating findings on the Roman Catholic Church in England.

It said the Church had been prioritising the protection of its own reputation over the need to expose priests who had been involved in abuse.

They singled out the head of the Church, Cardinal Vincent Nichols, for failing to show leadership and lacking compassion for the victims of abuse. Many of those victims have called for him to resign. He said that he offered to resign but it was declined by the Pope. Clearly, a cardinal is accountable to his boss rather than to his flock. 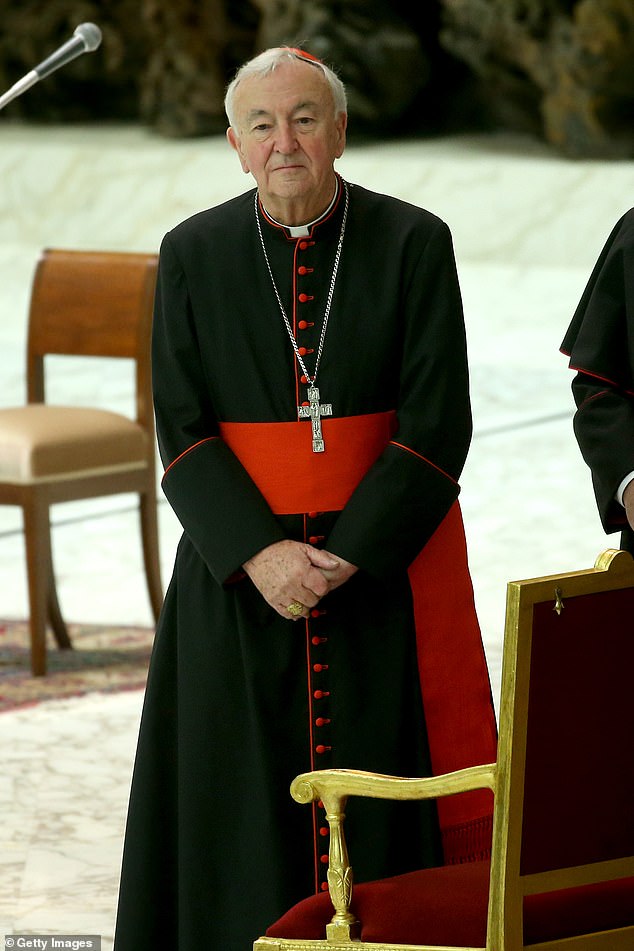 They singled out the head of the Church, Cardinal Vincent Nichols, for failing to show leadership and lacking compassion for the victims of abuse. Many of those victims have called for him to resign. He said that he offered to resign but it was declined by the Pope. Clearly, a cardinal is accountable to his boss rather than to his flock

It is hard to think of anything more morally heinous than the sexual abuse of children and it is to religious institutions that we once looked for moral guidance. So where should we look now?

But maybe that’s the wrong question. Perhaps we have no need for religious guidance in this secular age.

After all, science does not allow for spirituality or mysticism. How many of us credited God when we heard this week that we may be witnessing the beginning of the end of our long Covid nightmare? We praised the scientists who developed the vaccine. And rightly so.

Yet, moral questions still need addressing. Simply knowing how things work, which is the limit of what modern materialist secularism offers, is not enough.

Sacks defines those questions as ‘how to live, how to construct a social order, how to enhance human dignity, honour human life, and indeed protect life as a whole’. Science, he said, takes things apart to see how they work. Religion puts things together to see what they mean.

Yet, even at that level, our church leaders have been failing us. The Anglican Church may not have earned the same degree of opprobrium as the Catholic Church, but as the established church of this country it has certain responsibilities.

It is failing to deliver its first, which is the spiritual health of this country. The nation has stopped going to church on Sunday mornings. Of course, bums on seats are not the only measure, but when the figures drop relentlessly year on year — it’s hovering around 700,000 as I write — the message is pretty clear. The number of baptisms, marriages and funerals in church has dropped even more sharply. It’s true that we still attend in fairly large numbers on Christmas Day and Easter — but that suggests it’s the festive aspect that appeals rather than any religious significance.

The church’s response is that millions ‘encounter’ the church in their daily lives from food banks to night shelters and lunch clubs. And that would be fine, except that it seems to miss the point of going to church: to worship God and, presumably, to seek moral guidance.

The Archbishop of Canterbury Justin Welby has said that at the centre of Christmas is Jesus ‘who brings joy, healing, hope and love, whatever situation you are in’. I would respectfully warn His Grace to be careful where he makes that claim. 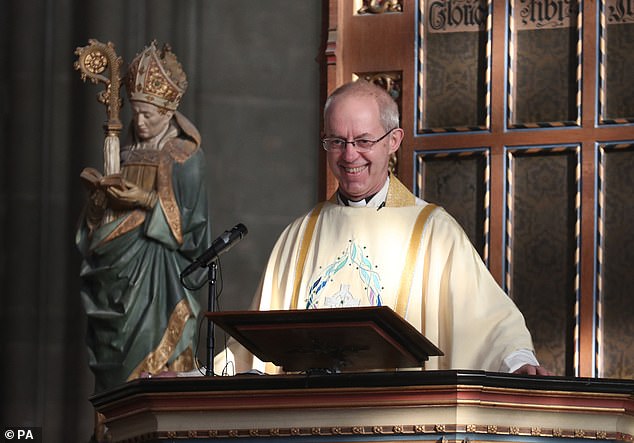 The Archbishop of Canterbury Justin Welby (pictured) has said that at the centre of Christmas is Jesus ‘who brings joy, healing, hope and love, whatever situation you are in’. I would respectfully warn His Grace to be careful where he makes that claim

Try telling that to the old people in our nursing homes who have forgotten what ‘hope and love’ even means. Many will die this Christmas in fear and alone because of the vicious regulations that mean they have not been able to hold the hands of their loved ones, let alone have a reassuring hug. They have been treated worse than an animal in a zoo or a prisoner in a jail.

As Kate Lee of the Alzheimer’s Society put it: ‘People die of loneliness, of lack of love, of losing the things that mattered most to them.’

This is an utter disgrace. It shames us as a nation. This newspaper was right to launch a campaign to change the inhuman rules. But it should not have been left to a newspaper. If ever there was a cause that should have been led by the Church this is surely it.

Justin Welby is quick enough to don his bishop’s regalia in all its finery or join the latest political campaign, but why isn’t he out there demanding that this obscenity be brought to an end?

On Monday, the House of Bishops solemnly announced that it was embarking on a formal ‘decision-making’ process on its attitude to sex, sexuality, marriage and gender, with the possibility that this would lead to its ending its opposition to same-sex marriage. What in the name of God is a ‘formal decision-making process’ and who cares what the bishops think of same-sex marriage anyway? We, the people, have already decided.

Perhaps Welby fears for his dignity. If so, he might reflect that Jesus had no worries on that score when he overturned the money changers’ tables in the temple.

I am not a theological scholar, but let me suggest what he might do if he really wants to reconnect his dwindling church with a sceptical nation. He should march up to one of those prison-like homes in full formal fig with a protective arm around a daughter who has not seen her mother for nine months, bang on the door with his staff and demand she be allowed in to hold her beloved mum’s hand.

I can guarantee he would lead every paper and news programme in the land and the nation would respond with two words: ‘Thank God!’ And the Government might actually take action. Like sacking the time-serving officials who listen only to each other and prioritise excuses over action.

But, of course, it won’t happen.

So if not religion, where should we look for moral leadership in the wider debate? It must be someone capable of inspiring the nation.

Someone who speaks for young as well as old, and places the vulnerable above the powerful.

Someone who believes that waste and pollution are sins that must be vanquished.

Someone who knows our first and greatest moral duty is to protect our planet from global warming and preserve the natural world in all its wonder for our children and their children. Someone like Sir David Attenborough.

I have a feeling that Jonathan Sacks might have agreed.