There has been much criticism this week of the trailer for a new Hollywood horror movie, Songbird. It’s one of the first to be made in LA since quarantine and its theme is a virus in the near future that mutates and infects people’s brains. Subtle, eh? There is indeed a powerful film to be made and it needs no fictitious sensationalising. It is what is happening in the real world right now — viewed from the future, perhaps, by a chap called Tim.

The newspaper’s morning conference was about to begin. Tim, the news editor, sighed and looked up from his computer screen. In the old days he would have seen a newsroom packed with colleagues bashing their phones or keyboards or chatting to each other about the morning’s big story.

But all he saw through his window was his youngest child playing in the garden. The two older kids were still in bed. He sighed again. They should have been at school or university and he should have been in his office.

Then he checked the date and his journalist’s antennae twitched. It was March 22, 2024. Tomorrow it would be four years to the day since normal day-to-day life in Britain had effectively come to an end.

Pictured: A still from the movie ‘Songbird’, Hollywood’s first Covid-based blockbuster, of which here has been much criticism this week after the trailer was released

Every news editor loves a really big anniversary but, Tim thought, this was not an easy story to write. The country had changed beyond recognition, but how to assess those changes?

In the early stages of the pandemic the country was terrified. Many were getting sick and some were dying. Admittedly, mostly old people, and often from the wrong treatment. Getting put on a ventilator was often not a cure: it was a death sentence. The doctors simply did not know enough about the virus.

But we’d trusted them and the scientists. We’d trusted our political leaders too. So when they had told us it was our job to ‘protect’ the NHS, we’d responded by clapping like mad and banging frying pans every Thursday evening.

So that, thought Tim, would be an important part of his paper’s coverage of the anniversary. Covid had brought the nation together. It had, briefly, been a good feeling. How different those distant days of 2020 had been.

The sun had shone and working from home had its advantages. Nobody missed commuting on overcrowded trains or sitting in traffic jams.

Millions, unable to work as a result of lockdown, were getting a decent income from the furlough schemes and the Chancellor had even given us a free pizza. A bit odd when the Government was telling us to lose weight and stay away from restaurants, but still . . .

But the nation’s mood had turned darker as the days grew shorter and confidence in our leaders evaporated.

One minute Boris Johnson was telling us that a second lockdown would be the height of absurdity. The next he was imposing one.

One minute the self-satisfied scientists were terrifying us with predictions of 4,000 deaths a day. The next even Theresa May was savaging ‘dodgy data’ that was ‘wrong before it was even used’.

She’d made the killer point that the figures were ‘being chosen to support the policy, rather than the policy being based on the figures’.She was hardly alone in her scepticism. We had reached the stage where we no longer knew who to trust or what to believe.

What we did know was that Johnson was great at producing soundbites. He’d boasted of a ‘world-beating’ testing scheme and promised a ‘moonshot’ plan with a target of 10 million tests a day, even though he was advised against it.

The reality was a hugely expensive but botched scheme unable even to contact vast numbers of people who might have been carrying the virus without knowing it. 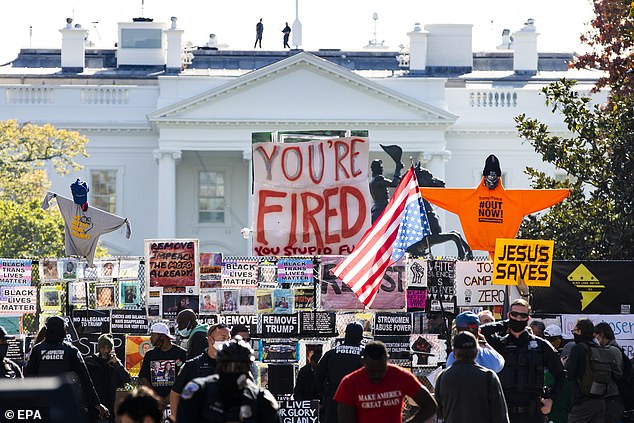 Pictured: A sign reads, ‘You’re Fired’, with the White House seen behind, as people react to election results indicating Joe Biden is on the cusp of the US Presidency, at Black Lives Matter Plaza in Washington, DC, 06 November 2020

By the end of 2020, people were taking his rhetoric with a hefty pinch of salt. We’d also had our fill of restrictions that were so complicated and contradictory even Cabinet ministers couldn’t understand them. Few bothered heeding them any more.

When Tim had taken his dog for a walk last evening, he had stopped to watch some youngsters kicking a ball around even though it wasn’t allowed. Good for them, he thought, they need the exercise so sod the rules! He wasn’t alone in that.

But he grew uneasy when he spotted a neighbour whispering into his phone. One of the growing number of snitchers perhaps? You could never tell these days.

People were joking about Big Brother watching us. Maybe only half joking. Covid cameras, once used to montior traffic, were now trained on the pavements for breaches of social distancing rules.

He was even more worried about the latest Westminster rumours. Could it really be true that Dominic Cummings was telling Johnson he should postpone the General Election which was only months away?

Surely, he thought, even his most loyal MPs would never agree to that. Then again, there was no such thing as a safe Tory seat these days. Just look at the state of the nation’s finances. 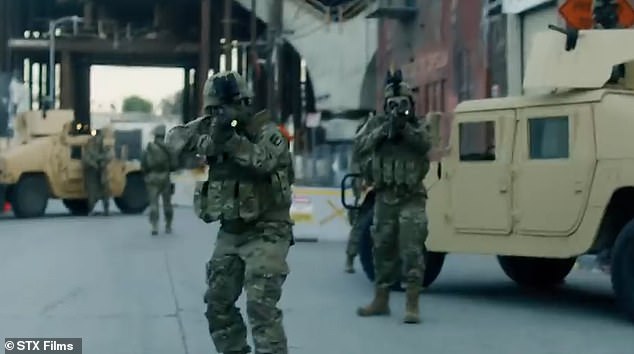 Soldiers pictured in the up-coming movie ‘Songbird’. It’s one of the first to be made in LA since quarantine and its theme is a virus in the near future that mutates and infects people’s brains

Tim recalled the Bank of England pumping yet another £150 billion into the economy at the start of the second lockdown and forecasting unemployment would double in six months. But all his contacts in the City told him it would get much worse. They had been proved right.

Big businesses including M&S and John Lewis had begun by laying off workers in the thousands. Now they were struggling to survive at all. Many small firms who had just about coped through the first lockdown had been forced to put up the shutters for good.

Business was worn down and also deeply suspicious. Everyone knew the Government was borrowing more than any in the country’s history. A ‘trillion’ was no longer unimaginable. Maybe soon we’d need a ‘gazillion’.

The furlough scheme, once used as a safety net, had morphed into a basic national income that had proved too politically risky to withdraw.

But why was the Government refusing to come clean on the worst-case scenario? Even the UK Statistics Authority accused it of excessive secrecy. What did it have to hide?

The crippled economy was sapping the nation’s spirits — especially those of young people. 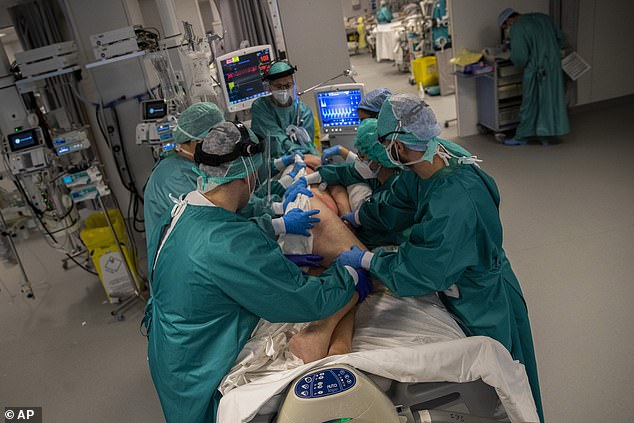 Tim had always been a little sceptical of youngsters moaning about being ‘stressed out’, but there was growing evidence that many really were struggling with mental health problems. His friend’s oldest daughter had tried to kill herself — the latest in a growing national crisis.

For once, Boris Johnson had not been overstating when he’d warned, long ago, that a second lockdown would have ‘disastrous consequences’. Too true, thought Tim. If only he’d heeded his own advice.

Clearly, the virus would have spread more rapidly without it, but many were left paying a terrible price for ‘protecting’ the NHS.

As the second lockdown had begun, new research had shown more than 3.3 million over-50s had had operations or treatment cancelled during the first — often with fatal consequences. Yet still their deaths were not being given comparable weight to the weekly Covid figures.

By the time Christmas 2020 came round, Johnson had promised no more national lockdowns, but regional restrictions were to become routine.

City centres had been hollowed out. Some pubs, cinemas and theatres had survived, but a night out was a pretty joyless experience, even where it was allowed.

The one thriving section of the economy was the surveillance industry. Marshals were everywhere. The promise that they would have no powers of enforcement had not lasted long.

Tim was puzzled. Why had the country consented to all this? True, the virus was still out there but nothing like as virulent. Vaccines had helped stem the spread, but new variants — like the Danish mink outbreak of November 2020 — meant herd immunity remained as elusive as ever.

Surely we could learn to live with it, just as we had with seasonal flu outbreaks, and so many other health threats.

Surely it couldn’t be that our leading politicians and scientists confused the nation’s interests with their own reputations.

Or could it? Tim looked back at his screen and joined the daily conference just as the Foreign Editor logged in to announce the likely result of the U.S. Election, brought forward by six months because of heightened civil unrest.

Donald Trump — once the sore loser who had claimed the 2020 vote was a fraud — was on the cusp of victory.