Read the bombshell texts a top female public servant sent about John Barilaro being appointed to a $500,000 ‘dream job’ in New York

Explosive text messages reveal the reactions of public servants to John Barilaro’s appointment to a plum US trade role as news filtered through to the government. 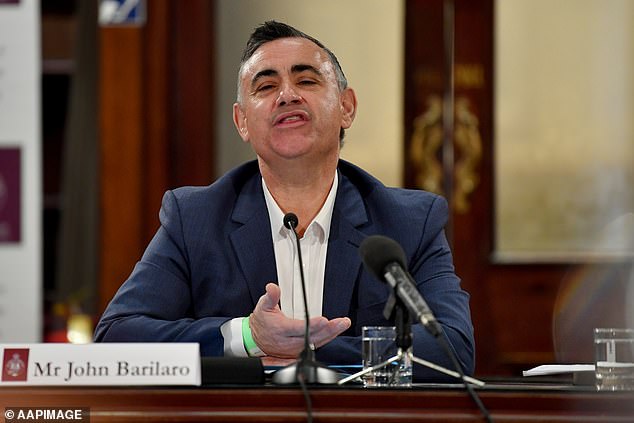 Former NSW Deputy Premier John Barilaro was appointed to the $500,000-a-year job in New York City – and now says he is a ‘victim’ of a political inquiry

Ms Brown texted back: ‘We should talk it through once I’ve pulled everything together. Technically it was my decision.’ 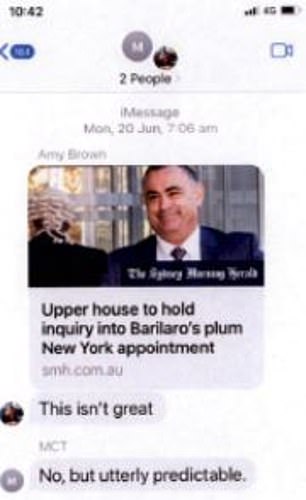 The texts, ordered as part of the upper house probe into Mr Barilaro’s hiring, were published on Tuesday night.

Ms Brown has maintained it was her decision to appoint Mr Barilaro during her appearance at three upper house inquires.

However, she conceded she was somewhat influenced as the government sought to convert the roles to ministerial appointments.

In May, the month before Mr Barilaro’s hiring was announced, Ms Brown texted Mr Coutts-Trotter to let him know she had the green light from Premier Dominic Perrottet to proceed with the contract.

‘I’ve been told that premier and DP (Deputy Premier Paul Toole) are comfortable with the appointment of Barilaro … and requested to get on with formalising the arrangements (which I’ll do).’

Ms Brown previously told the inquiry she approached Mr Coutts-Trotter to discuss the appointment and told him she was nervous about it.

‘He didn’t say what he was going to do necessarily,’ Ms Brown told the inquiry last Wednesday, noting she also did not receive a substantial answer. 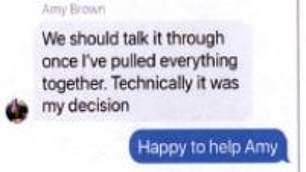 Mr Coutts-Trotter was charged with running a separate inquiry into the hiring process by the premier, which is in fact being conducted by former public service commissioner Graeme Head to ensure confidence in the process.

Mr Head is being paid $73,500 for running the inquiry, not including costs he will be reimbursed for.

‘Any aggro from anyone?’ Mr Clark asked on the day of the announcement.

‘A little but it has settled,’ Ms Hull replied, with a blushing smile emoji.

‘Not sure who told Yoni. Probably Barra (Mr Barilaro) himself,’ Ms Hull replied, with the eye roll emoji.

The pair appear to be discussing a June 16 column by News Corp journalist Yoni Bashan, which reported Mr Barilaro was ‘on the move’, having resigned from his job at Coronation Property.

The report pipped the government’s release by a day.

Mr Barilaro was told he was the successful candidate by Investment NSW managing director Kylie Bell on May 23.

‘Texting to say congrats and we’re thrilled you are our STIC for Americas,’ Ms Bell said.