By Adriana Diaz For Dailymail.Com

Podcaster Joe Rogan welcomed Amanda Knox on the latest episode of The Joe Rogan Experience, where he insisted that Donald Trump will try to run for President again and ‘probably win.’

Knox spoke about her famous wrongful conviction when she was accused of murdering her roommate in Italy. She was convicted in 2007 and acquitted by the Italian Supreme Court in 2015.

She began speaking about Italy’s former Prime Minister Silvio Berlusconi, who she described as ‘the Donald Trump of Italy’ and served as Prime Minister of Italy from 1994 to 2011.

Knox mentioned the ‘ridiculously long time’ that Berlusconi was in power when Rogan commented ‘that’s probably what Trump wanted too.’

Rogan’s reply lead Knox to ask if Trump is going to try to make another bid for the Oval Office. Trump and some of his associates have mentioned another run but the twice-impeached President has not made an official commitment. 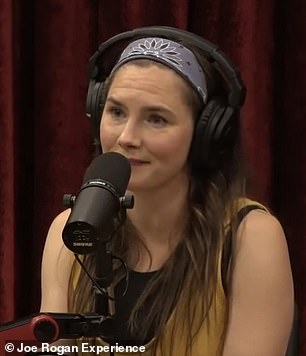 Knox agreed that Biden doesn’t seem to have a good shot at another win, calling Biden ‘not very inspiring.’

‘They’ve done a terrible job. The Democrats f*cked up royally by making that guy the President.’

His comments prompted Knox to ask if he thinks that the Democratic party would allow someone else like Vice President Kamala Harris to run instead. But Rogan quickly insisted that ‘she would lose just as badly.’

‘She’s the most hated Vice President according to polls. The least liked, I should say, Vice President in 50 years,’ Rogan claimed not citing which polls he is referring to.

Knox agreed that she ‘wasn’t very excited about her given her history with wrongful convictions.’

In April, Trump said that he is ‘100%’ considering running for President in 2024 and said he could tap Florida Governor Ron DeSantis as his running mate this time around.

Trump was asked about his 2024 presidential run last week by his former press secretary Sean Spicer but refused to give an official comment.

‘I will probably not comment on that, but I will tell you I think you will be very happy Sean,’ he said. ‘I think you and a lot of other people that love our country are going to be very happy.’