Joe Biden said Thursday in Kenosha, Wisconsin that he was able to talk to Jacob Blake, the black man shot by a white officer in the city, by phone as he gathered with family members at Milwaukee’s General Mitchell International Airport.

‘I had the opportunity to spend some time with Jacob on the phone. He’s out of ICU. We spoke for about 15 minutes,’ Biden said at the Grace Lutheren Church in Kenosha. ‘He talked about how nothing was going to defeat him. Whether he walked again or not, he was not going to give up.’

Biden and his wife Jill made a two-city trip to Wisconsin, a key swing state, first stopping in Milwaukee for a meeting with Blake’s family members and then motorcading to Kenosha for a conversation with community stakeholders.

The state’s Democratic Gov. Tony Evers said Thursday that he didn’t want Biden, nor President Donald Trump who visited Kenosha Tuesday, to make the trips during the current unrest. But ‘candidates can make their decisions’ and ‘it is what it is,’ Evers said, according to the Associated Press.

In Milwaukee, reporters were kept outside the hour-long meeting, but the campaign said the Democratic nominee and his wife met with Jacob Blake’s father, Jacob Blake Sr., his sisters Letetra Widman and Zietha Blake, his brother Myron Jackson, and lawyers Patrick Salvi Sr. and B’Ivory LaMarr.

His mother Julia Jackson and attorney Ben Crump joined the meeting by phone.

Crump put out a statement about the meeting, as Biden was revealing his phone conversation also included Blake, who was shot seven times in the back by police with three of his children in his car. He’s likely paralyzed from the waist down.

Joe Biden met with community leaders Thursday at the Grace Lutheren Church in Kenosha, Wisconsin, after talking to shooting victim Jacob Blake by phone during a Milwaukee meeting with family members 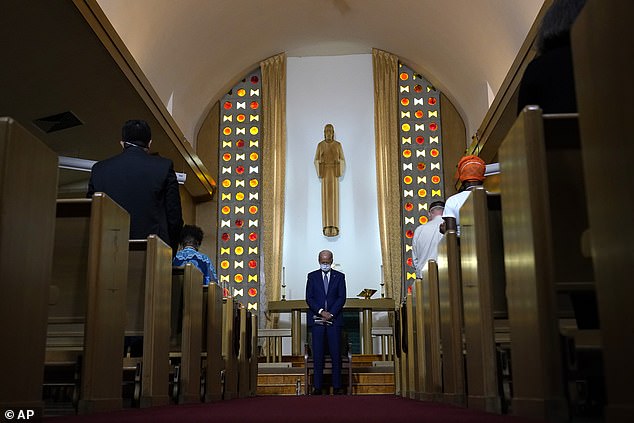 Joe Biden bows his head in prayer at the Grace Lutheran Church in Kenosha, Wisconsin where he held a listening session with community leaders Thursday, two days after President Donald Trump visited the city 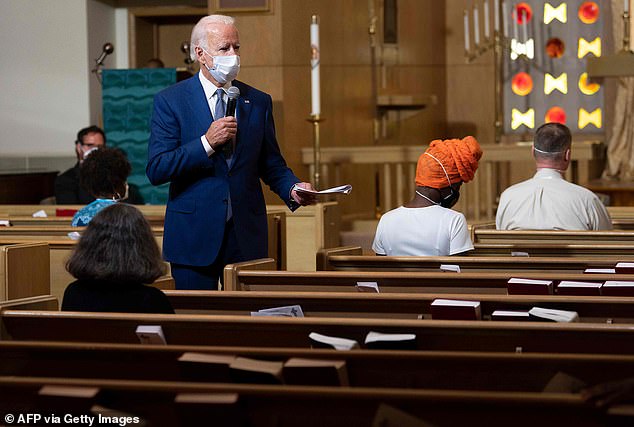 Joe Biden addresses community members in Kenosha, Wisconsin on Thursday after speaking with shooting victim Jacob Blake and meeting with some of Blake’s family members in Milwaukee 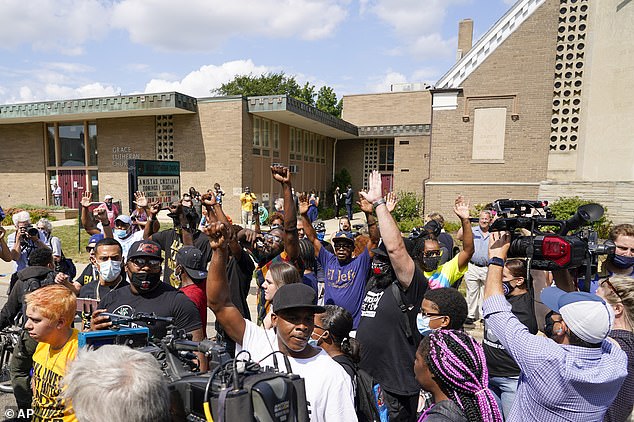 ‘The family was grateful for the meeting and was very impressed that the Bidens were so engaged and willing to really listenl,’ Crump reported.

Crump and Biden both talked about how Blake’s mother, Julia Jackson, led the group in prayer.

Biden explained that his wife, Jill, had asked to say a prayer and it was led by Jackson. ‘I’m praying for Jacob and I´m praying for the policeman as well. I´m praying that things change,’ Jakcson said, according to the former vice president.

‘They talked about changing the disparate treatment of minorities in police interactions, the impact of selecting Kamala Harris as a Black woman as his running mate, and Vice President Biden’s plans for change,’ Crump continued.

On Biden’s conversation with the shooting victim Crump said, ‘Jacob Jr. shared about the pain he is enduring, and the vice president commiserated.’

‘It was very obvious that Vice President Biden cared as he extended to Jacob Jr. a sense of humanity, treating him as a person worthy of consideration and prayer,’ Crump said.

At the community event, Biden had two rounds of community members speak about what they were seeing on the ground and then spoke to them.

‘I’m giving you too much, I can see you’re about to stand up,’ Biden said at one point. At another point when he got too wonky, he used the unfortunate expression, ‘Not going to lay it out for you, I won’t now because they’ll shoot me.’

Earlier, Biden shook hands with aide Brian McPartlin as he got off the private plane he took to the state, considered a no-no in the coronavirus era.

At the church one participant, a Kenosha shopkeeper named Barb DeBerge, talked about the devasation the business community has seen in the wake of several nights of riots and unrest following Blake’s shooting.

‘We have never seen anything as devastating as what has gone on in our community. We are very fortunate because they didn’t start our building on fire,’ she told the ex-vice president.

She said that while her store, DeBerge Framing & Gallery had its windows broken and was looted, a good samaritan saved it from catching fire.

‘I look at the buildings in our community that are gone and I just, I don’t think, I don’t think grieved as much as I feel I should,’ she said.

Biden, again, condemned the fires, looting and riots that have taken hold in several American cities, including Kenosha.

‘Protesting is protesting, my buddy John Lewis used to say. But none of it justifies looting, burning or anything else. So regardless how angry you are, if you loot or you burn, you should be held ccountable as someone who does anything else. Period,’ Biden said.

Trump has continued to push a false narrative that Biden hasn’t denounced rioters, nor brought up law enforcement, which he has.

Biden was able to sprinkle criticism of Trump through the community event.

He brought up Lewis, who passed away on July 17, again as he urged Americans to vote.

‘As John said, the only answer is to vote,’ Biden said.

Biden’s Wisconsin visit comes two days after Trump visited Kenosha to tour wreckage from the riots that broke out in the aftermath of the police shooting of Blake. 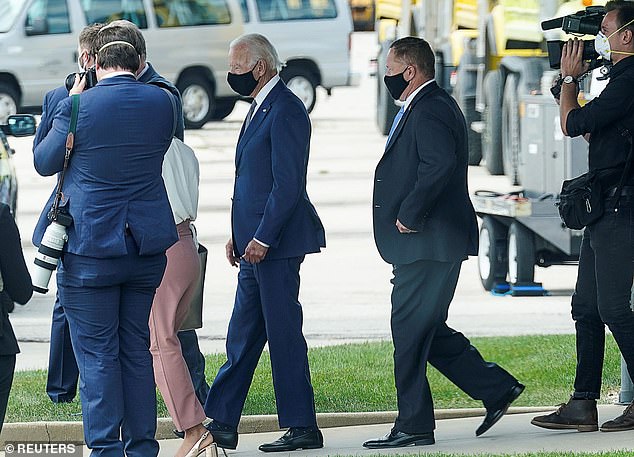 Democratic nominee Joe Biden is captured leaving a meeting with Jacob Blake’s family at a Milwaukee airport building on Thursday. Press was kept out of the meeting, but the campaign said Blake’s father, two sisters, brother and two lawyers joined Biden and his wife, Jill 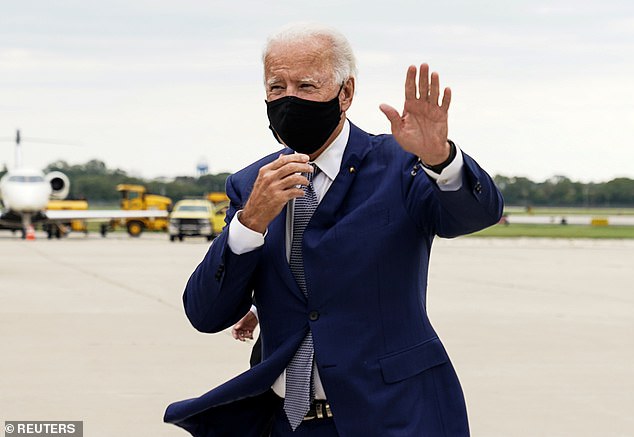 Democratic nominee Joe Biden met with Jacob Blake’s family as soon as he landed in Milwaukee, Wisconsin on Thursday. He’ll then travel to Kenosha, where Blake was shot and wounded by police, to meet with community members 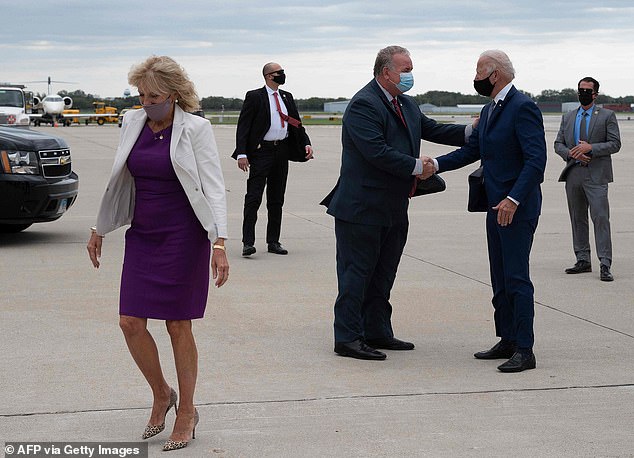 OOPS: Joe Biden slipped up and gave his aide Brian McPartlin a handshake as he disembarked from the private plane he and Jill Biden (left) took from Delaware to Milwauke, Wisconsin, where he’s meeting with Jacob Blake’s family at an airport building 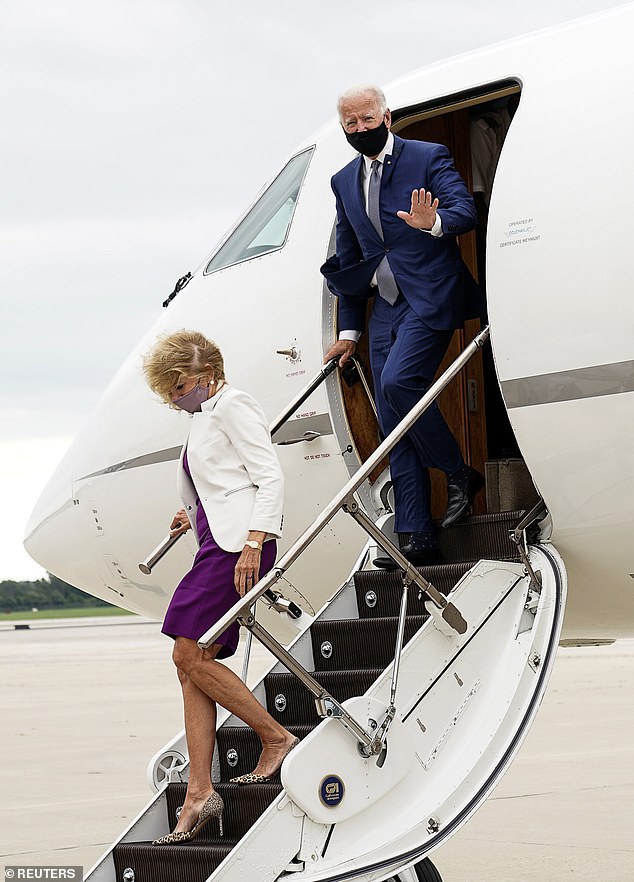 Jill (left) and Joe Biden (right) met with family members of Jacob Blake, the Kenosha, Wisconsin man who was shot by police, as soon as they landed in Wisconsin on Thursday 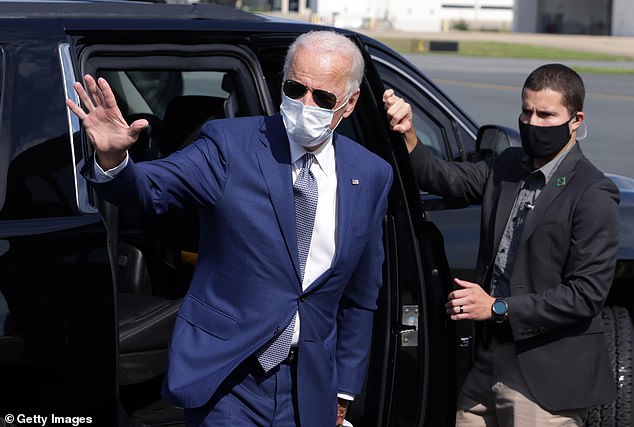 Joe Biden waves to reporters as he arrives at the New Castle, Delaware airport en route to Kenosha, Wisconsin where he plans to meet with Jacob Blake’s family members and take part in a community event 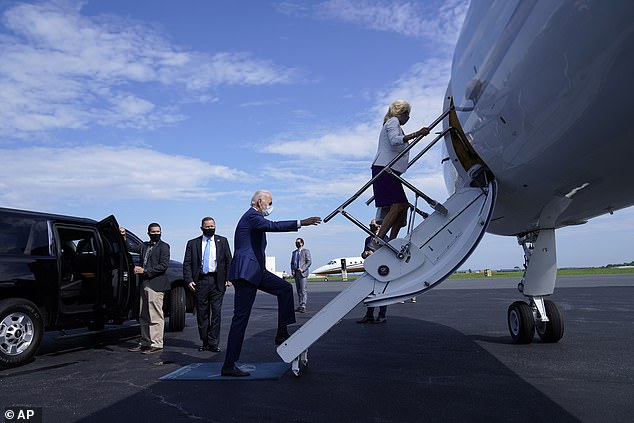 Joe Biden (left) is accompanied by his wife, Jill Biden (right), as they board their flight to Kenosha, Wisconsin on Thursday. The Bidens’ trip to the Wisconsin city comes two days after President Donald Trump traveled there 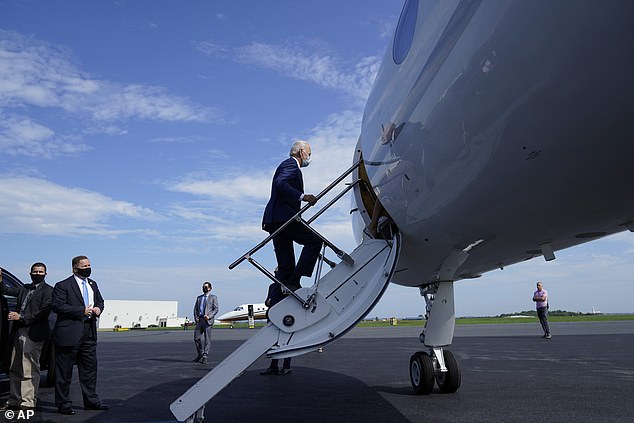 Joe Biden has said he intends to try to ‘heal’ the community and bring people together during his trip to Kenosha, Wisconsin, which has seen protests and violent outbursts in the aftermath of last month’s police shooting of Jacob Blake, a black man who remains hospitalized 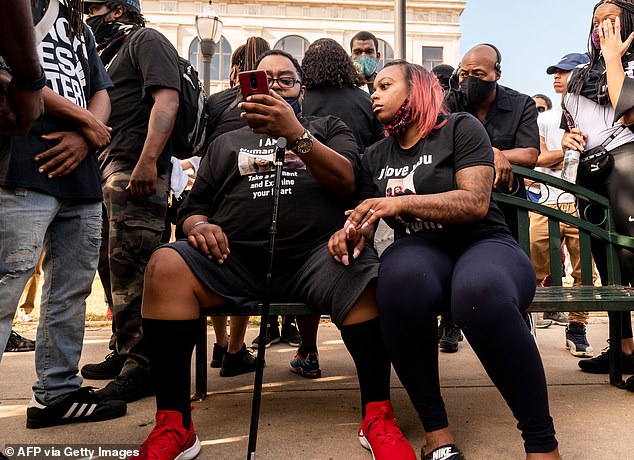 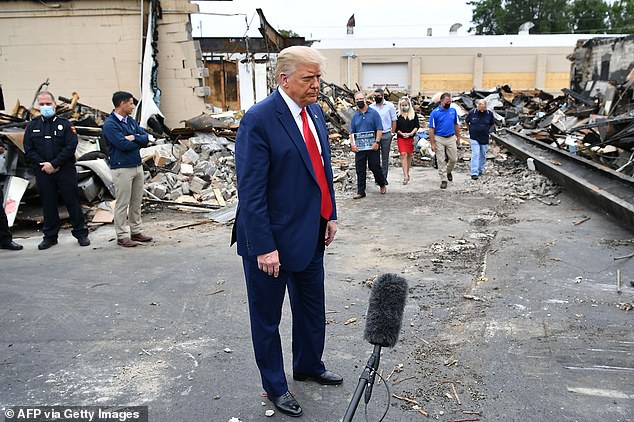 President Donald Trump visited Kenosha on Tuesday after Democratic leaders told him not to come. He toured wreckage from the riots that broke out after Blake’s shooting and held a roundtable event with law enforcement and other community leaders

Trump did not meet with members of Blake’s family, nor did he say Blake’s name during his remarks.

On the ground in Kenosha, the president dismissed the idea that most of the Black Lives Matter demonstrations that occurred after the Memorial Day death of George Floyd – and more recently the shooting of Blake – have been peaceful.

State and local officials, including Wisconsin Gov. Tony Evers, a Democrat, and Kenosha’s Mayor John Antaramian, also a Democrat, said they didn’t want Trump to come, but the president insisted.

Biden was asked Wednesday during a Q&A with reporters what made his trip to the area any different.

‘I have spoken to all the leaders up there,’ the former vice president said, adding that he had been working with Evers’ staff, but had yet to speak one-on-on with the state’s governor. ‘There have been overwhelming requests that I do come.’

‘We’ve got to heal, we’ve got to put things together, bring people together and so my purpose in going will be to do just that,’ Biden continued. ‘Be a positive influence on what’s going on, talk about what needs to be done and try to see if there’s a beginning of a mechanism to bring folks together.’

He said he had received advice from House and Senate members, who he said encouraged him to make the trek.

‘And I’m not going to do anything other than meetings with community leaders as well as business people and other folks in law enforcement and start to talk about what has been done,’ Biden said.

The campaign has not publicly confirmed that he’s meeting with the Blake family.

‘I’m not going to tell Kenosha what they have to do,’ Biden also said.

Biden’s trip to Wisconsin marks the first time a Democratic presidential candidate has gone to the state since the 2012 cycle.

Hillary Clinton notably skipped campaigning in Wisconsin, only to lose the state to Trump, helping him earn his Electoral College victory in 2016.

The Democratic National Convention was supposed to take place in the state – and while some delegates did gather in Milwaukee – Biden and his running mate Kamala Harris gave their nomination speeches from Wilmington, Delaware instead, due to the ongoing coronavirus pandemic.

Trump and the Republicans have gone after Biden for his reluctance to travel.

On Wednesday, as the president was heading to North Carolina – another key swing state – he started referring to Biden as ‘Joe Hiden,” as the ex-veep spent most of the early months of the pandemic campaigning from his Wilmington basement.

This week Biden took on a more robust campaign schedule, traveling to Pittsburgh Monday to deliver a speech.

The campaign called an early ‘lid’ Tuesday – meaning the candidate would not be leaving his residence, which again garnered criticism from Republicans.

On Wednesday, Biden delivered remarks on reopening schools and then took questions from reporters, the first time he devoted real time to a press Q&A in weeks.

On Friday, Biden will deliver remarks on the economy to reporters back in Wilmington.