EXPRESS INFORMER > News & Politics > Joe Biden gets COVID-19 vaccine, urges Americans to get it as soon as it’s available

U.S. president-elect Joe Biden received his first dose of the Pfizer-BioNTech COVID-19 vaccine live on television Monday at a hospital in Newark, Del., in an effort to boost confidence in its safety ahead of its wide distribution in the new year.

Biden has said he would make the fight against COVID-19, which has killed more than 315,000 Americans and infected more than 17.5 million, his top priority when he takes office on Jan. 20. At age 78, he is in the high-risk group for the highly contagious respiratory disease.

His black long-sleeved shirt rolled up, Biden received the injection from Tabe Masa, nurse practitioner and head of employee health services at Christiana Hospital in Newark, Del., in front of reporters.

After getting the shot of the Pfizer-BioNTech vaccine, Biden praised medical professionals as “heroes.”

“I’m doing this to demonstrate that people should be prepared when it’s available to take the vaccine. There’s nothing to worry about,” Biden said.

His wife, Jill Biden, who got the injection earlier in the day, stood by.

WATCH | Biden gets the shot and tells Americans they should do the same: 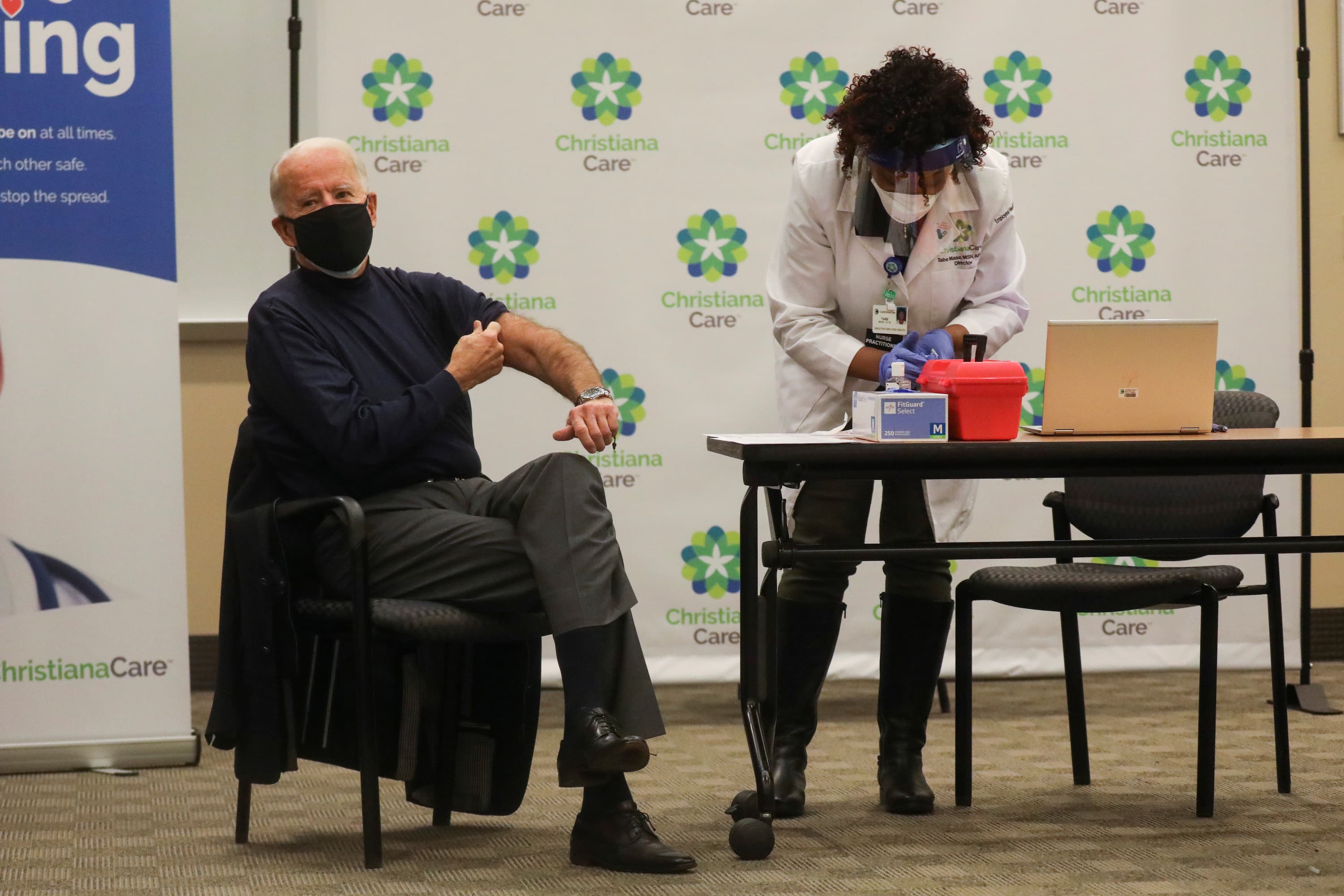 U.S. president-elect Joe Biden says he got the shot to demonstrate that people should take the vaccine themselves when it is available. “There’s nothing to worry about,” he said. 3:34

But Biden also noted that the vaccine would take time to roll out and that people should listen to medical experts and avoid travelling during the holidays.

Vice-president-elect Kamala Harris is expected to get the vaccine next week.

Republican President Donald Trump has frequently played down the severity of the pandemic and overseen a response many health experts say was disorganized, cavalier and sometimes ignored the science behind disease transmission.

Efforts to limit the economic fallout on Americans from the pandemic were boosted on Sunday when congressional leaders agreed on a $900-billion US package to provide the first new aid to citizens in months, with votes likely on Monday.

Biden on Monday named additional members to his National Economic Council, rounding out his economic policy-making team with people his transition office said would help lift Americans out of the economic crisis.

Joelle Gamble will be special assistant to the president for economic policy.

“This is no time to build back the way things were before, this is the moment to build a new American economy that works for all,” Biden said in the statement.

Biden had already named Brian Deese, who helped lead Obama’s efforts to bail out the automotive industry after the 2008 financial crisis and negotiate the Paris climate agreement, to lead the council, which co-ordinates the country’s economic policy-making.

Much of the fate of Biden’s White House agenda will hinge on the outcome of a pair of Senate runoff elections in Georgia on Jan. 5 that will determine which party controls the upper chamber of the U.S. Congress.

Harris travelled on Monday to Columbus, Ga., to campaign on behalf of Jon Ossoff and Raphael Warnock, the Democratic candidates locked in tight races with incumbent Republicans.

Trump was briefly hospitalized in October with COVID-19, and many of his advisers and White House staff have also contracted the illness.

The outgoing president, making unsubstantiated claims of widespread electoral fraud, has focused on trying to overturn his election loss in recent weeks, even as daily COVID-19 deaths soared. His campaign’s latest long-shot effort was another petition to the U.S. Supreme Court on Sunday that legal experts predict will fail.