Anthony Albanese’s ‘secret weapon’ has revealed the moment she knew she knew was in love when she got the harrowing new he’d been in a serious car crash.

Australians got to see another side of the Prime Minister on Sunday night as ‘Albo’ gave television cameras unprecedented access of his life, including his new home, The Lodge in Canberra, and behind the scenes of his recent trip to Europe.

Mr Albanese’s partner Jodie Haydon broke her silence in her first television interview where she candidly spilled the beans on her two year relationship with the Prime Minister and the lasting impression French President Emmanuel Macron and his wife  left on her during a recent meeting.

The financial advisor had been dating the then Opposition Leader for barely a year when his car was wiped out by a Range Rover driven by a P-plater metres away from his home in Sydney’s inner-west in January 2021.

Mr Albanese was rushed to hospital with extensive injuries.

‘When I got to the accident and I saw the car before I saw Anthony, and I remember thinking at the time, ‘this can’t end well’,’ Ms Haydon told 7 News Spotlight

‘And that overwhelming sense of ‘what if I lose him?’ And I knew then that, yeah, I love him. And I love him deeply.’

Jodie Haydon. the partner of Anthony Albanese has embraced her role as Australia’s ‘unofficial’ lady

Mr Albanese also opened up on the crash.

He was also shown his partner’s recollection of the accident.

‘She is an amazing woman,’ he responded.

When asked if it was love, he replied: ‘Yes.’

Ms Haydon has embraced her new role as Australia’s unofficial First Lady and accompanied Mr Albanese on his recent trip to Europe, where she struck an instant connection with Brigitte Macron, the French president’s wife.

The pair first met in Madrid while their partners attended the NATO Summit before meeting again in Paris several days later.

‘I was fortunate enough to have met a couple of days earlier when we were in Madrid and from the moment I met her, she was so warm and friendly and took my hand and said so nice to meet you. Straight away I felt comfortable with her,’ Ms Haydon said

‘It is very French. Anthony doesn’t do that, I might have to have a word to him about it! They were both wonderful,’ Ms Haydon laughed. 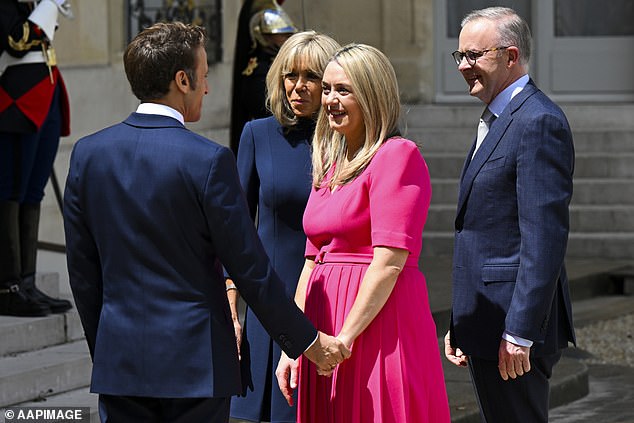 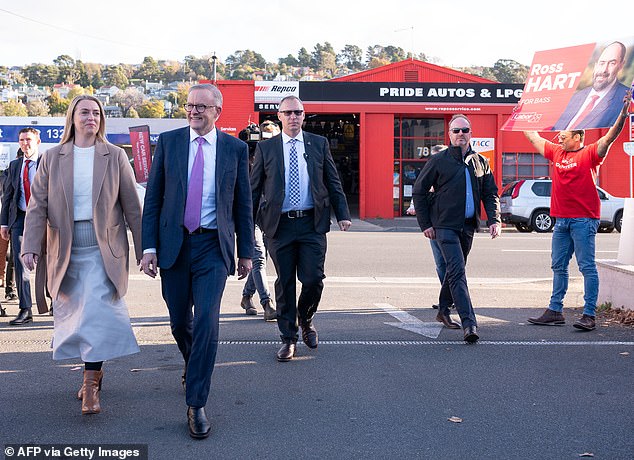 Ms Haydon hopes Australia sees the qualities in their new leader that she sees in him.

‘I guess I can say that and get that sense of comfort to everybody because when I met him, yet he was a politician and I hope he would be the person I had seen in newspapers and television, and he is.’

‘Everyone else should know about him, Anthony has overwhelming compassion and that was something I was attracted to, but compassion and kindness. Behind closed doors, is a really spectral partner. He respects me being independent, but also he is kind and thoughtful. 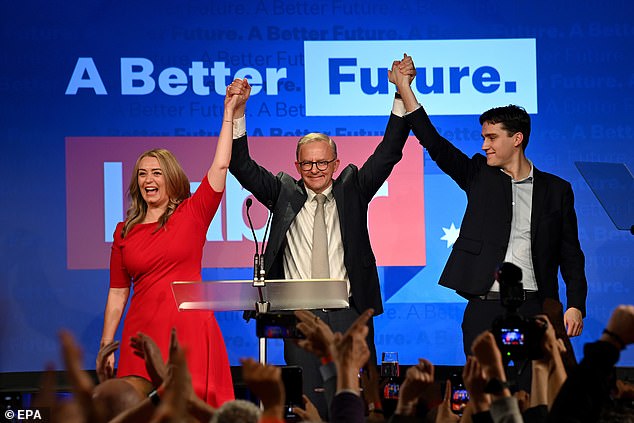 Ms Haydon also revealed while she got emotional after farewelling Mr Albanese in Paris for his top secret visit to Ukraine.

She was left so upset she had to be comforted by nearby staffers, describing the whole ordeal as ‘overwhelming’.

‘That was really hard. I’d been doing so well all day in preparation for him going,’ she told 7Spotlight.

‘I think it was the moment that we got down into the foyer and the team was lined up to say goodbye to him.

‘And there were some hugs and some embraces, and we get outside and the car’s waiting, and suddenly it hits me, he’s going to a war zone.’

Mr Albanese also showed inside The Lodge and at Kirribilli, where his predecessor Scott Morrison left him a letter.

He is the first unmarried prime minister to call The Lodge home since the departure of Julia Gillard in 2013.

He recently made the move from his Marrickville home in Sydney’s inner-west and has been joined by his beloved cavoodle Toto.

Ms Haydon is unlikely to make the move to Canberra, having just taken a job as a women’s officer at the NSW Public Service Association based in Sydney.

Ms Haydon is expected to continue living in Sydney in the inner-west suburb of Stanmore.

Some light has only recently been shed on the PM’s lover’s political views.

Daily Mail Australia revealed LinkedIn posts where Ms Haydon freely airs her  opinions on why the date of Australia Day should be changed, pay rises for teachers and supporting asylum seekers. She has since deleted that profile.

Social media gives only a small insight into Ms Haydon – with her colleagues at work sharing a picture of a ‘young Albo’ poster she left in her office, prior to her absence – seemingly to keep an eye on them.

‘I had to make sure you didn’t miss me too much so popped a friend up for you to chat to!’ she joked. 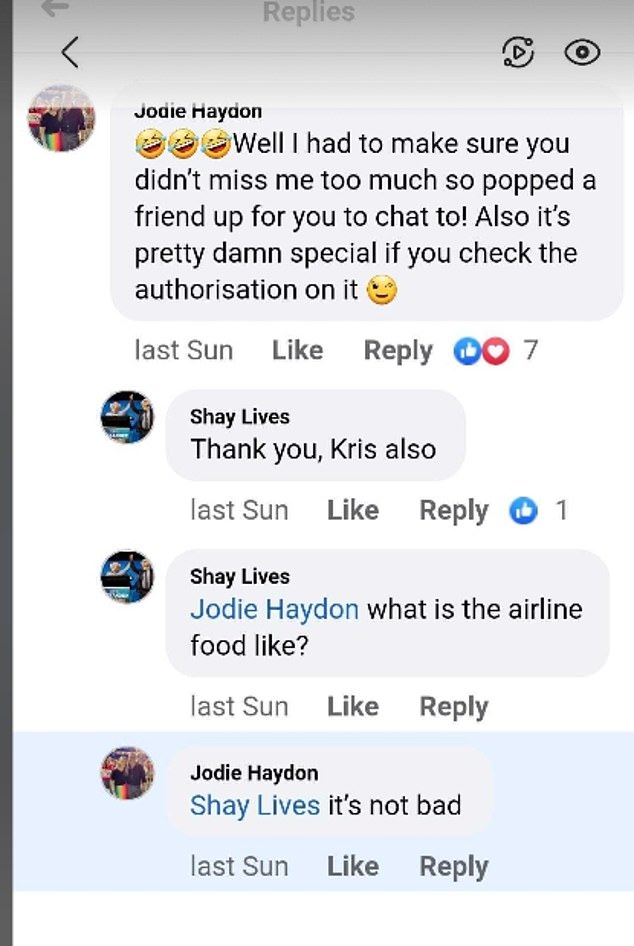 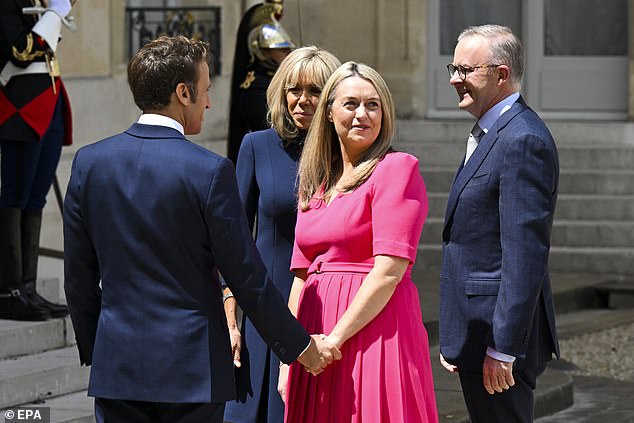 Despite her growing profile, she recently declared she wants to avoid making political commentary as the Prime Minister’s partner.

‘My job will be to focus on my day job and allow Anthony to focus on his,’ she recently told News Corp.

Ms Haydon began dating Mr Albanese in 2020, a year after his wife of 19 years, former state education minister Carmel Tebbutt walked out on him .

A few months later, the the Opposition leader was speaking at a conference in Melbourne when he asked crowd if there were any fellow South Sydney NRL fans present.

Finance worker Ms Haydon, who lived in his Grayndler electorate, shouted: ‘Up the Rabbitohs’.

He later introduced himself and  arranged to meet up for a drink in their hometown.

‘We had what I thought would just be a drink at Young Henrys in Newtown, and we got on really well. That’s how it started,’ he told the Women’s Weekly earlier this year. 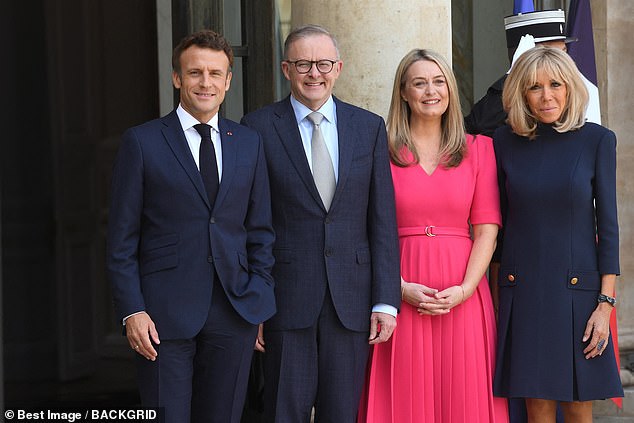