The Jockey Club’s group chief executive stepped down after making comments about the Black Lives Matter movement and sharing a meme about Britain’s Got Talent singer Susan Boyle, sources said.

Delia Bushell, 48, tendered her resignation on Sunday after independent barrister Jack Mitchell found evidence to support a number of the allegations of misconduct against her – including bullying, racist comments and sharing offensive materials.

A complaint was lodged by group sales and marketing director Tom Manners.

It was found to be ‘untenable’ for the former BT Sport and Sky executive to stay in her role, the 270-year-old organisation’s board said.

It has now emerged that Bushell allegedly cited US activist Candace Owens who said George Floyd was a criminal.

White police officer Derek Chauvin knelt on Floyd’s neck for eight minutes until he passed out and later died. His death sparked outrage in the US which quickly spread worldwide. 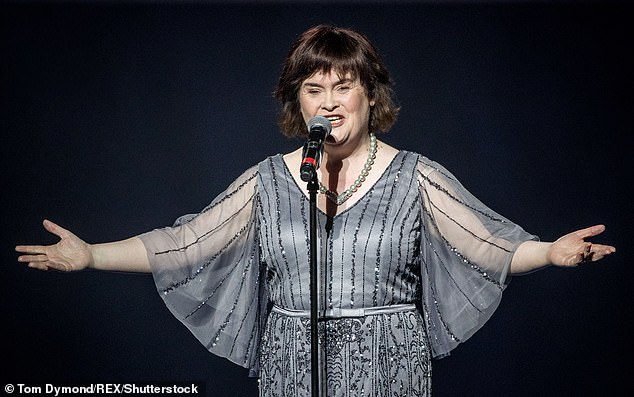 During a conversation about memes – which was also a one-off incident – Bushell is believed to have told colleagues that she was sent an inappropriate image about Susan Boyle (pictured), which she said she would share with the others

Bushell is understood to have cited the right-wing commentator during a discussion between The Jockey Club’s senior executives about how to respond to the world-wide outrage, The Times reports.

She wanted to signal the organisation’s support for the BLM movement by writing to all employees, the source suggested.

But one executive remarked that making real change would be a more suitable option – as writing could be deemed ‘virtue signaling’.

Bushell – who has been dubbed a supporter of diversity – mentioned Owens after claiming there had been many different responses to Floyd’s killing.

In a video called ‘I DO NOT support George Floyd and I refuse to see him as a martyr’, Owens said: ‘You would be hard pressed to find a Jewish person who has spent five stints in prison, who commits a crime and dies while committing a crime and that the Jewish people demand justice for.’

During a conversation about memes – which was also a one-off incident – Bushell is believed to have told colleagues that she was sent an inappropriate image about Susan Boyle, which she said she would share with the others.

Bushell – who was one of 19 witnesses who interviewed as part of the review – claimed she was herself subject to ‘unmerited, dishonourable, bullying behaviour’ and accused the organisation of a ‘deeply unpleasant stitch-up’ in a resignation letter.

The claims are believed to have been disputed when they arose, the paper reports.

Bushell has also faced allegations that she spoke to witnesses – asking them to testify – before barrister Mr Mitchell contacted them himself, unaware that this could be considered tampering. 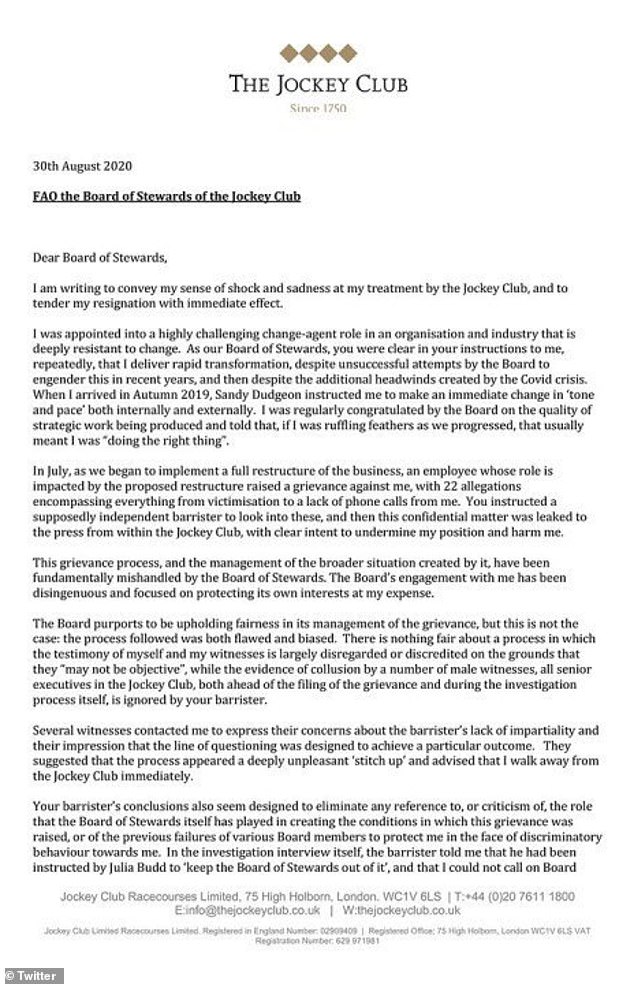 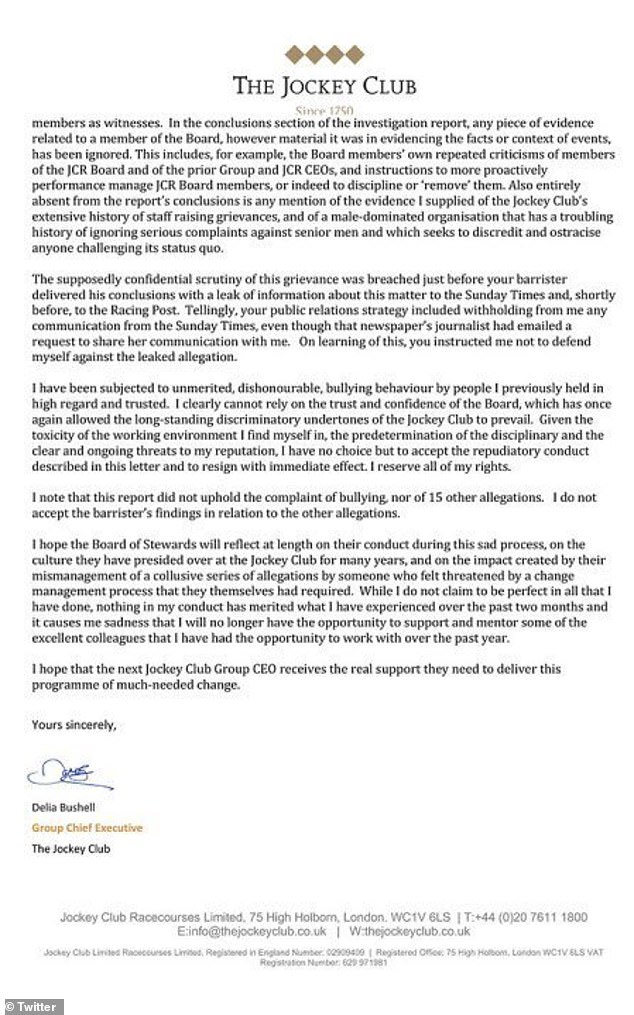 The former BT Sport and Sky executive – who was one of 19 witnesses who interviewed as part of the review – claimed she was herself subject to ‘unmerited, dishonourable, bullying behaviour’ and accused the organisation of a ‘deeply unpleasant stitch-up’ in a resignation letter

In her resignation letter, Bushell said the jockey club has not paid attention to ‘serious complaints against senior men’.

She said the review was not completed in a fair way and believes her testimony – and that of her witnesses – was ‘largely disregarded or discredited’.

The Jockey Club said its barrister was impartial and the inquiry was independent.

Bushell was one of the most powerful figures in British race horsing after she took over the organisation less than one year ago.

The Jockey Club, which owns a number of high profile horseracing tracks including Aintree, Cheltenham, Epsom and Newmarket, said an independent barrister had submitted a detailed report to a sub-committee of the board last week.

That sub-committee, which includes Tory peer Dido Harding – who is in charge of the NHS Test and Trace system – decided there was a basis for disciplinary action against Ms Bushell including on the grounds of gross misconduct.

In a statement, the Jockey Club said: ‘The Board of The Jockey Club announces today that Delia Bushell is to stand down as Group Chief Executive with immediate effect.

‘This follows the completion of an independent review into a wide range of allegations about her conduct, which the Board concluded made it untenable for her to continue in the role. 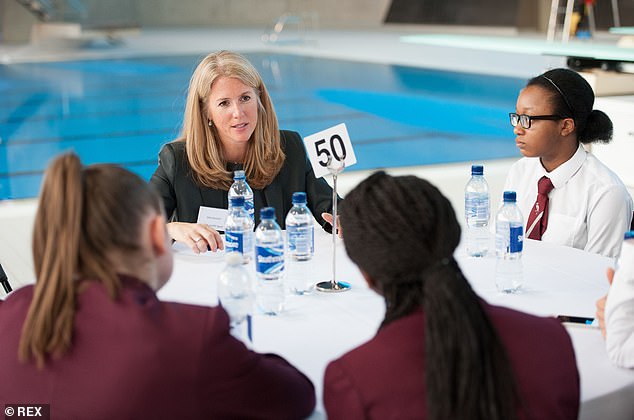 Bushell tendered her resignation after an independent barrister found she had a case to answer for gross misconduct – allegations she claims are not true. Above, Bushell pictured at an Inspiring Women in Sport event

‘As part of this review, an independent barrister interviewed 19 witnesses including Delia. He submitted a detailed report to a sub-committee of the Board comprising Dido Harding, Julia Budd and Justin Dowley on Sunday 23rd August in which he concluded that there was evidence to support a number of the allegations of misconduct including bullying behaviour towards colleagues, inappropriate racist comments and sharing offensive materials.

‘The sub-committee of the Board agreed with his conclusion and decided that there was a basis for disciplinary action against Delia including on the grounds of gross misconduct. This recommendation was accepted by the full Board of The Jockey Club.’

Nevin Truesdale has been appointed as acting group chief executive, the club said.

Bushell is also a non-executive director of the England and Wales Cricket Board and sits on the advisory board of the Telegraph Media Group.

She has previously made it clear that she wanted to modernise the Jockey Club, by bringing a more commercial edge to the racing body, diversifying revenue streams and cutting costs.

Speaking about the club in March, she said: ‘Because it has been so large and so successful for so long, it probably felt that it hasn’t needed to draw a broader and more diverse audience.’

The Jockey Club owns 15 racecourses, including Aintree, which hosts the Grand National, and Epsom Downs, home of the Derby.

The body expects to lose £75m in turnover due to Covid-19.

Bushell and Manners declined to comment to the Times.