Luxury British car-maker Jaguar Land Rover is set for another jobs boost as its Indian owners yesterday announced a doubling of investment to £1.5billion a year to fund a range of new models – both at home and abroad.

The extra cash injection and prospect of thousands of new jobs comes as the firm is set to announce Jaguar and Land Rover production in booming China. It already builds Land Rovers in India.

Tata said it had now selected a Chinese joint venture partner for manufacturing its luxury vehicles in China and that an official announcement will be made ‘very soon’.

Magazine: Autocar has uncovered a secret ‘baby’ Jaguar project. It yesterday emerged that Jaguar Land Rover is set for another jobs boost as its Indian owners announced a doubling of investment to £1.5billion a year to fund a range of new models

Chinese sources said in December that Jaguar Land Rover had ‘agreed in principle’ to develop a luxury car with China’s Chery Automobile.

But bosses in India stressed that UK production and investment will also increase.

This is understood to include a top secret new ‘baby’ saloon car costing around £22,000 to take on Audi’s popular A3 hatchback which could be launched within three years.

Jaguar Land Rover’s Indian parent company Tata Motors said on Tuesday it will double investments in its Jaguar and Land Rover models to £1.5billion a year.

‘Going forward, we will double that. Jaguar Land Rover spending will be in the order of £1.5billion each year.’

Mr Ramakrishnan told reporters that the increase would apply in the current fiscal year ending in March.

Jaguar Land Rover contributed 95 per cent of Tata Motors profits in the quarter to the end of December, with a profit margin of 20 per cent – three times the profitability seen at Tata’s domestic business.

Hilton Holloway, of leading motoring magazine Autocar, said of the secret ‘baby’ Jaguar project: ‘According to sources in India the new model is thought to be about 4.5metres long.

‘There will be a number of variations on the mainstay four-door saloon, including a coupe and possibly a small roadster.’ 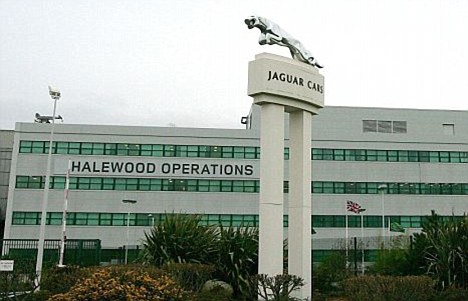 Jaguar’s Halewood factory on Merseyside is also tipped for expansion with investment of up to £100million to double the size of the plant and the create up to 1,500 new jobs

In November, Jaguar Land Rover announced 1,000 new jobs to accelerate its export-led expansion plans. This will help deliver 40 significant new models and variants over the next five years under a multi-billion pound investment in new vehicles.

The new British jobs will be created at the firm’s Land Rover plant in Solihull, West Midlands – one of its three factories – and represents a 25 per cent increase in the plant’s workforce.

The firm’s Halewood factory on Merseyside is also tipped for expansion with investment of up to £100million to double the size of the plant and the create up to 1,500 new jobs.

It already builds the compact new Range Rover Evoque, which has won a clutch of awards with Victoria Beckham designing the interior for a special edition ‘VB’ version.

A top secret new generation Range Rover is set to go into production at Solihull this Autumn. Heavily disguised prototypes of the luxury 4X4 in black and white zebra stripes were spotted on test in and around the Queen’s Balmoral estate in Scotland in November.

Jaguar Land Rover is also on a product roll with a new two-seater Jaguar sports car – codenamed C-X16 but already dubbed the E-Type for the 21st century to go on sale next year – as well as two new prototype versions of its iconic Defender for production in 2015.

In May last year it unveiled a £1million petrol-electric hybrid British supercar codenamed C-X7 and the most expensive and ‘greenest’ Jaguar in its history.

Prime Minister David Cameron and a number of Cabinet ministers are already chauffeured in the new flagship XJ saloon.

The luxury car-maker – which employs some 21,000 workers in the Midlands and Merseyside – said it will build a £355million engine plant in Wolverhampton that will potentially create thousands of jobs.

The company reported pre-tax profits of £1.1billion in the year to March 31 last year, up from £14.6million the previous year. Revenues increased 51per cent to £9.9billion.

The results represented a turnaround on two years earlier when the company slumped to a loss as the car market collapsed amid the global economic meltdown.

Tata’s super-rich boss Ratan Tata retires on his 75th birthday in December, to be succeeded by 43-year-old Cyrus Mistry.

Jaguar Land Rover is also to build the next generation of its iconic back-to-basics Defender off-roader in India from 2015 – and may even export Indian-built Defender off-roaders back to the UK in kit form, to be assembled here by British workers.

Land Rover already builds some of its Freelander model in India – exported in kit form for final assembly – in Pune.