An upcoming series about the life of legendary comedian Joan Rivers is no longer moving forward.

The Comeback Girl, which would have starred WandaVision actress Kathryn Hahn, was scuttled because the producers had not secured Rivers’ life rights, Variety reported on Tuesday.

The series also was the subject of controversy earlier this month after comedian Sarah Silverman slammed the production for ‘Jewface’ casting by using Catholic actress Hahn, who is not Jewish.

Canceled: The Comeback Girl, a biopic series about the late Joan Rivers starring Kathryn Hahn, is no longer moving forward, Variety reported on Tuesday; Rivers seen in 2012 in NYC

Rivers’ daughter Melissa Rivers, 53, currently controls her mother’s life rights, but she didn’t give the series permission to use any of the comic’s material.

The series could have theoretically gone forward as an unauthorized adaptation of her life, but it would have been prevented from using any of the comic’s standup material or her writings.

The risky approach would have also opened the production up to possible legal challenges from Melissa or her mother’s estate.

The series, which was first announced by Variety in September, was set to take place during a tumultuous point in Rivers’ career, following the cancellation of her short-lived late night talk show and the suicide of her husband Edgar Rosenberg, who was also her producer.

The Comeback Girl was expected to show the comedian rising from the ashes like a Phoenix to become the iconic entertainer she was known as in her final decades. 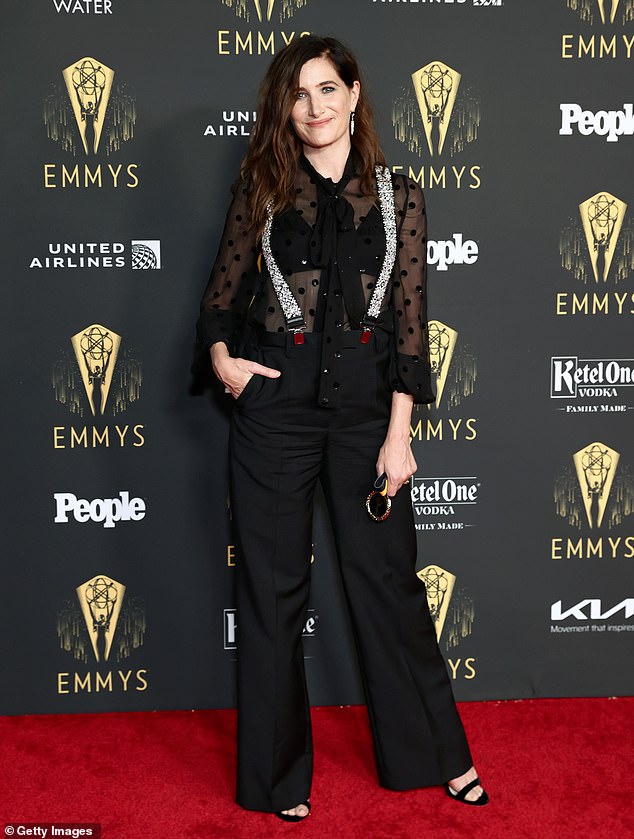 Dead in the water: Hahn, 48, was set to play Rivers in the late 1980s, but the production failed to secure Rivers’ life rights from her daughter Melissa Rivers, 53; seen September 17 in LA

It’s not clear yet if Melissa has plans for her own projects about her mother’s life, and a spokesperson for her didn’t have anything to announce.

Shortly after the project was announced, Sarah Silverman took issue with the casting of Hahn, who is Catholic, to play Rivers, a Jew.

She saw the casting as fitting into a pattern in which non-Jewish women got roles playing famous Jewish figures.

‘There’s this long tradition of non-Jews playing Jews, and not just playing people who happen to be Jewish but people whose Jewishness is their whole being,’ she said during an episode of The Sarah Silverman Podcast from earlier this month.

‘One could argue, for instance, that a Gentile [a non-Jew] playing Joan Rivers correctly would be doing what is actually called “Jewface,”‘ she continued.

She defined ‘Jewface’ — inspired by the term ‘Blackface’ — as ‘when a non-Jew portrays a Jew with the Jewishness front and center, often with makeup or changing of features, big fake nose, all the New York–y or Yiddish-y inflection.’ 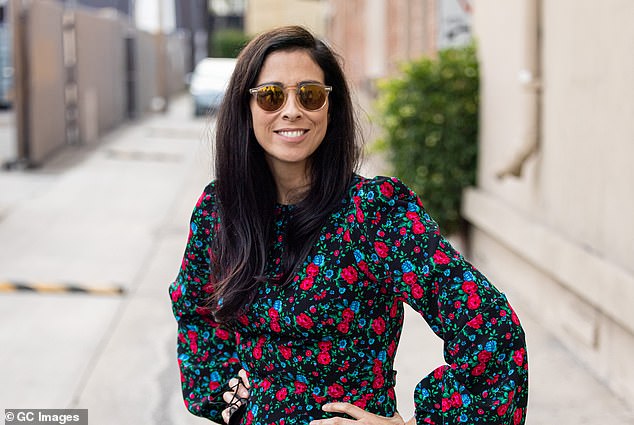 Controversy: After the show was announced, comedian Sarah Silverman blasted the production for casting a non-Jew (Hahn) in the role, which she said fell into a pattern she called ‘Jewface’; seen in August in LA

She pondered why the representation of Jewish women seemed to be less important than representing other races, ethnicities and cultures.

Silverman also claimed there was a pernicious pattern in which any Jewish woman who is ‘courageous or deserves love … is never played by a Jew.’

She noted several high-profile non-Jewish actresses who have played Jews in recent years, including Felicity Jones, who starred as the late Supreme Court Justice Ruther Bader Ginsburg in 2018’s On The Basis Of Sex, and Rachel Brosnahan, who stars as the fictional title character in The Marvelous Mrs. Maisel. 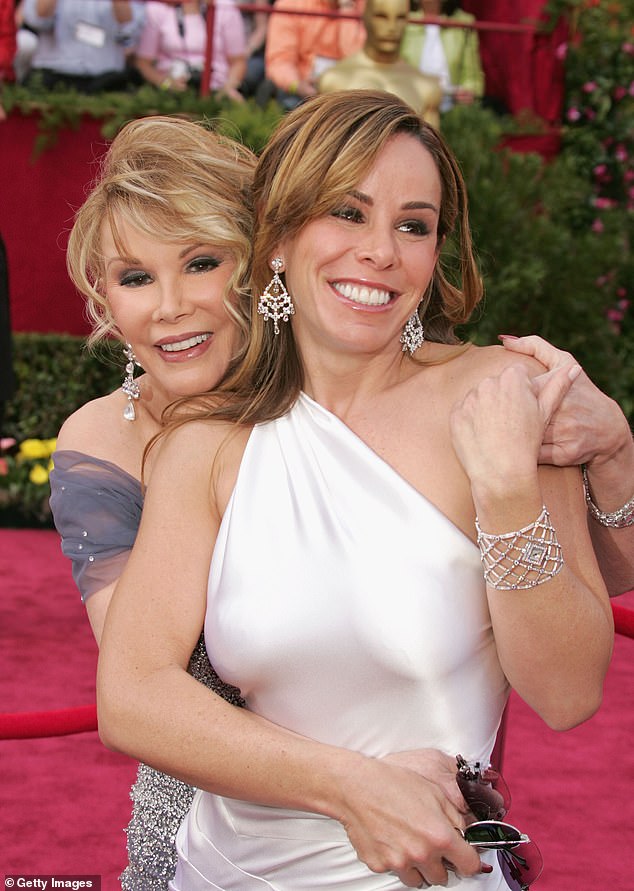 Tragic death: Rivers died in September 2014 at 81 after she stopped breathing during a minor throat procedure. She died days later from brain damage caused by a lack of oxygen; seen with Melissa in 2005 in Hollywood

Rivers’ storied career ended with her death in September of 2014 at age 81.

She had gone under the knife for a minor procedure on her vocal cords on August 28, but during the surgery she stopped breathing for a substantial period.

Doctors were later able to resuscitate her and transferred Rivers to a hospital, where she was placed in a medically induced coma.

She died on September 4, and the medical examiner determined her death was due to brain damage caused by the extended lack of oxygen.

Melissa, her only child, shared the sad news in a statement: ‘It is with great sadness that I announce the death of my mother, Joan Rivers.

‘She passed peacefully at 1:17pm surrounded by family and close friends. My son and I would like to thank the doctors, nurses, and staff of Mount Sinai Hospital for the amazing care they provided for my mother.

‘Cooper and I have found ourselves humbled by the outpouring of love, support, and prayers we have received from around the world. They have been heard and appreciated.’

‘My mother’s greatest joy in life was to make people laugh. Although that is difficult to do right now, I know her final wish would be that we return to laughing soon.’ 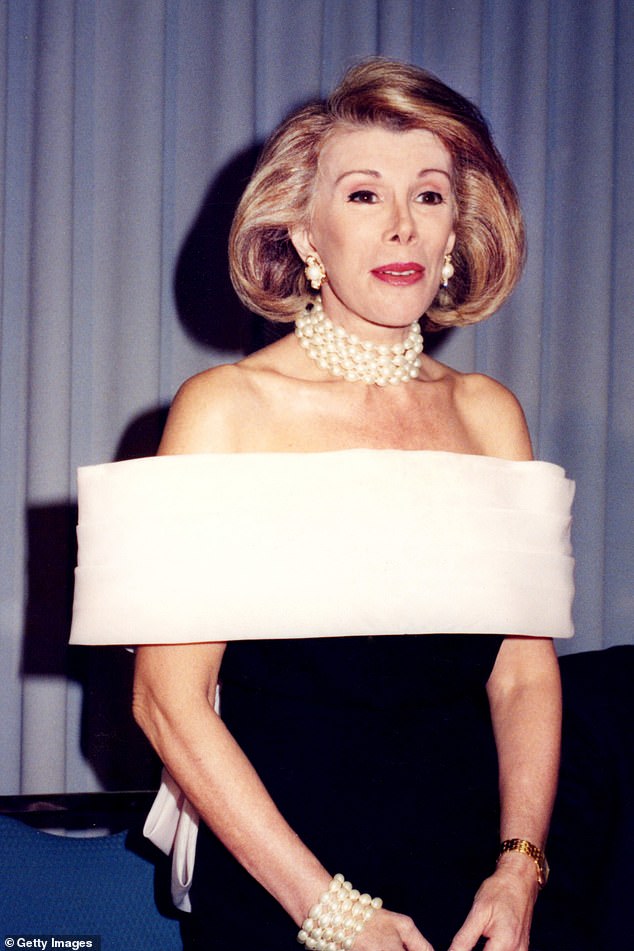 Rise and fall: Rivers became a standup sensation and a regular guest on The Tonight Show in the mid-’60s, but her career plummeted after a failed late-night show in the late 1980s; seen in 1991 in Ft. Lauderdale, Florida

Federal investigators later determined that the clinic had made several significant mistakes during the procedure, including failing to address Rivers’ plummeting blood pressure and possibly giving her the wrong dose of anesthetic.

Melissa Rivers sued the clinic and the doctors who did the surgery for malpractice, eventually receiving a settlement and an admission of responsibility.

Rivers’ career took off in the mid-1960s, when she emerged as a potent standup and a popular guest star on The Tonight Show for years to come.

She became the only woman with her own late-night talk show in the 1980s, but Johnny Carson banned her from The Tonight Show in response, and she and her husband were fired from the series less than a year after it went on the air.

Rosenberg died by suicide on August 14, 1987, just three months after he and his wife were fired.

It’s unclear if the sensitive nature of the time period covered in The Comeback Girl, the period shortly after Rosenberg’s death, might have affected the producer’s ability to get the rights to Rivers’ life from her daughter. 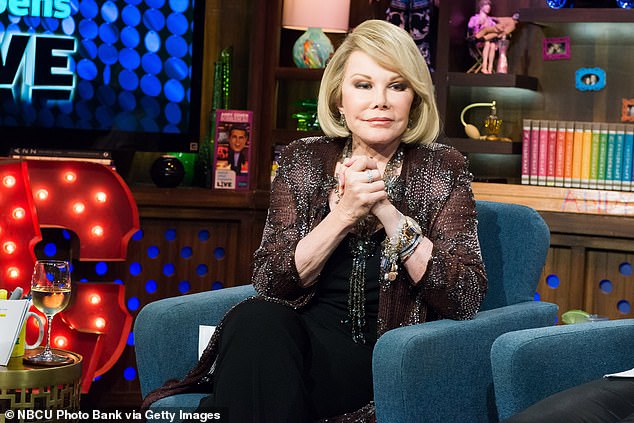 Rising again: River’s husband Edgar Rosenberg, who was her producer, killed himself just months after they were fired in 1987. Joan later rose to prominence again as a legendary stage performer