Joan Laporta has revealed that he only found out about Ronald Koeman’s plan to read a prepared statement in his Wednesday press conference ‘at the last minute’ – and admitted that his patience is running thin.

An under-pressure Koeman refused to answer any reporters’ questions in the pre-match media briefing, instead choosing to read a three-minute statement where he asked for ‘support in these difficult times’.

The Dutchman’s job has been the subject of much speculation following Barcelona’s slow start to the season. They were soundly beaten 3-0 at home by Bayern Munich in the Champions League before only managing a draw against Granada at the Nou Camp, leaving the Catalan side eighth in LaLiga.

It has seen Koeman face difficult questions regarding his future at the club in recent weeks, leaving him to take extrodinary action on Wednesday.

And while Laporta says he respects Koeman’s way of handling the situation, the Barca chief says he only found out about the desperate move shortly before.

‘We found out at the last minute that he wanted to make a statement and, well, he’s obliged to attend press conferences and he’s free to respond or speak as he wishes,’ Laporta told Sport.

‘We respect the coach’s decision, but we and the captains found out a bit before.’ 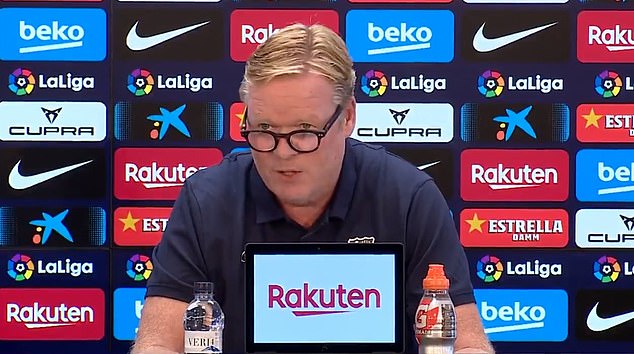 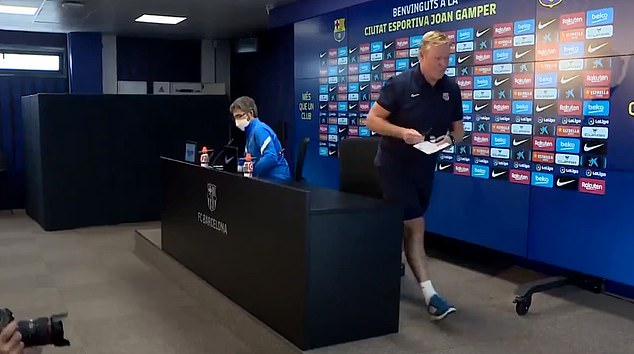 After finishing reading from his sheet of paper, Koeman left without taking media questions

When asked if his patience was limited, Laporta simply responded: ‘Yes, of course.’

‘Well, we’re in a difficult moment and I think that we should have a lot of serenity and wait for a good result tomorrow against Cadiz, because that’s what interests us, situations which you overcome with results,’ Laporta insisted.

‘We will move forward and keep fighting. We’ll get the ball on the ground, what’s important is that tomorrow we play well.’

Wednesday represented another strange chapter in Barcelona’s recent history and one that could have ramifications for Koeman’s already rocky relationship with the board. 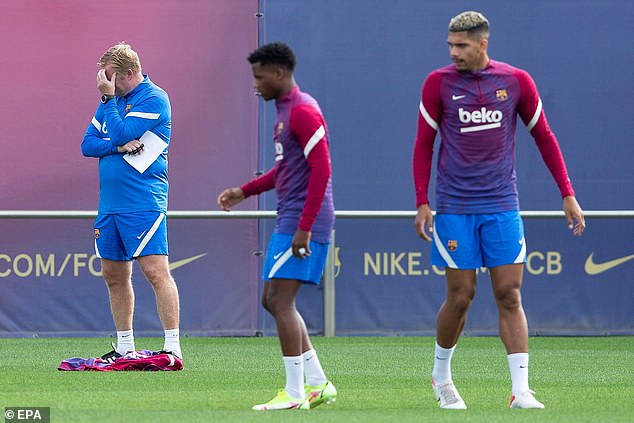 Koeman was appointed by the club’s previous president Josep Maria Bartomeu last summer but the re-election of Joan Laporta in March was always likely to prompt a change of direction at the Nou Camp.

His relationship with Laporta has become more strained after he criticised the president in an interview with Dutch media, saying he “says too much”.

Laporta has released two videos in the past week on social media addressing fans on the team’s predicament and also asking for them to be patient while the club deals with its colossal debt, which led to Lionel Messi leaving this summer to join Paris Saint-Germain.