Harry Potter author JK Rowling has revealed she was not snubbed at a recent reunion show over her controversial views on transgender people, but instead declined the invitation.

The reunion, Return To Hogwarts, was released on January 1, but did not feature the author behind the series apart from in old archive footage.

The author’s appearance on the 20-year anniversary show was widely speculated about in the wake of scandal over her statements about women’s and transgender people’s rights, which were branded ‘transphobic’ – but no statement from the author clarified the matter.

She has historically spoken out about cancel culture amid claims she has been ‘cancelled’ by younger generations – but her new interview today shows that was not the case here – she simply ‘didn’t want to be a part of it’.

Speaking with Graham Norton on Virgin Radio, the 57-year-old said today: ‘I was asked to be on that and I decided I didn’t want to be a part of it.

‘It was about the films not the books, quite rightly. That was what the anniversary was about.

She clarified that she wasn’t advised against making an appearance, explaining that it was her own decision, following fan speculation around her absence.

The reunion, Return To Hogwarts, was released on January 1, but did not feature the author behind the series apart from in old archive footage (pictured) 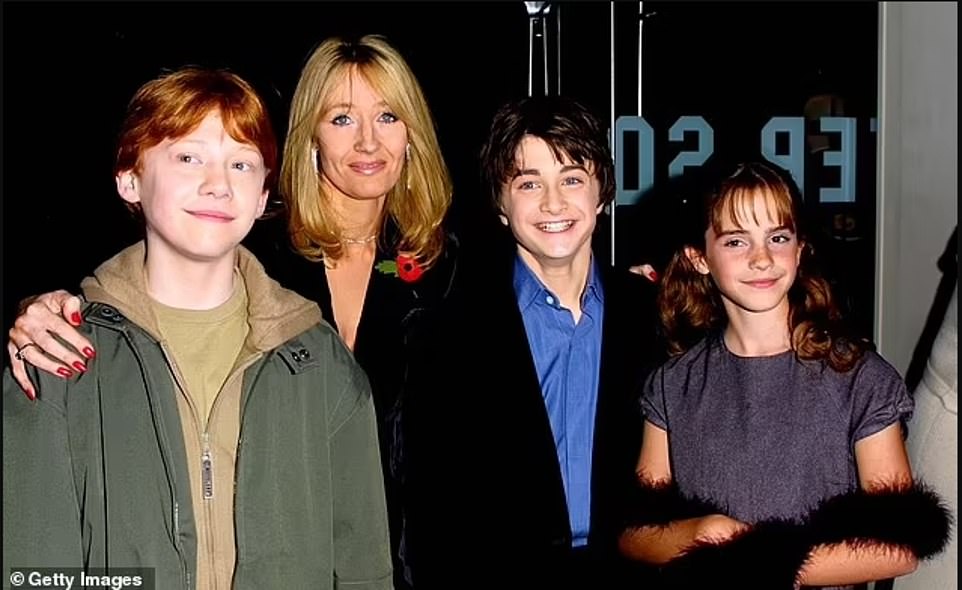 Pictured: JK Rowling with young stars from Harry Potter. The only footage of the author speaking herself as opposed to being discussed was a segment from a 2019 interview

On speculation she had been snubbed for the reunion show

It was wonderful what happened with Potter – but it was quite overwhelming at times. Crime fans… Like their sleep (laughs)

There are more echoes than I realised. I should make it really clear that after some of the things that have happened to me over the last year that this is not depicting… I had written the book before certain things happened to me online. I said to my husband I think everyones going to see this as a response to what happened to me but it genuinely wasnt. The first draft of the book was finished at the point certain things happened. I’m being very mysterious, I’m just talking about online threats and so on.

On going out and being recognised

I was once in a shop in London with my son, he was a bit younger then and we took a wrong turn in the toy department and I ended up in the Harry Potter mechanise, and I was trapped. Because there was a big group of American young people behind me and a tonne of people in front andi dragged David behind a bookshelf and said “we’ll just wait here for a moment”. My son said how much money would you want for me to not shout “she’s here!”

I can go out and about but I don’t hang about Harry Potter mechanise stores which would be a little bit self destructive I think.

On speaking to the Harry Potter cast

I have… yes, I do. Some more than others but that was always the case. Some I knew better than others.

On how to de-escalate trolling online

I think on one level I’m not sure I can. I’m not sure any individual can. I try to behave online as I would like others to behave. I wouldn’t ever want to..I’ve never threatened anyone. I wouldn’t anyone to go to their houses or anything like that. Social media can be a lot of fun and I do like the pub argument aspect of it. That can be a fun thing to do, but there’s no doubt that social media is a gift for people that want to behave.

I did actually take a whole year of Twitter or quite a long time and then when covid happened… I actually didn’t go back on for the pub brawl stuff, I went back on because i wanted to do the The Ickabog – a children’s book for those who don’t know – and I wanted to put it out for free and twitter was a really good….so I went back on for the intention of doing The Ickabog and I sort of have a love hate relationship with it now. I can happily go for afew days without getting into a pub brawl.

On links to the new book, The Ink Black Heart

Because the last book – Troubled Blood – was a cold case and it was very very traditional and I wanted to do something very different, and go into a completely different world of now. And it was a fun way to explore it because Strike is older, and not the type of person to ever be on Twitter or ever have any interest really in being on Twitter. He’s in a world he’s not really familiar with.

On Tom Burke and Holliday Grainger

They are fantastic people – two of the nicest people, most unpretentious and yet gifted actors you’re ever going to meet.

An archive shot during the reunion showed the author at a signing for the first book, while Robbie Coltrane, who played Hagrid, also lauded JK for helping people establish a love of books again during the rise of Potter mania.

The only footage of the author speaking herself as opposed to being discussed is a segment from a 2019 interview which is repeatedly serialised.

In the interview she is seen discussing the uphill struggle to find an actor to play Harry when casting the first movie, Harry Potter And The Sorcerer’s Stone.

Since the last Harry Potter film was released its author has become a deeply divisive figure.

Most recently she hit headlines after posting about a ‘death threat’ she received in the wake of the violent attack on author Salman Rushdie.

The day of the attack, she wrote on Twitter: ‘Horrifying news. Feeling very sick right now. Let him be ok’.

An Islamic extremist then appeared to threaten Ms Rowling, writing: ‘you are next’.

She said she reported the threat to Twitter, before posting a screenshot of the response, commenting: ‘These are your guidelines, right? “Violence: You may not threaten violence against an individual or a group of people. We also prohibit the glorification of violence… “Terrorism/violent extremism: You may not threaten or promote terrorism”…’

In an apparent bid to get Aziz booted off Twitter, Rowling later posted: ‘@TwitterSupport any chance of some support?’.

In her Virgin Radio interview, Graham Norton asked Ms Rowling about how she felt online trolling could be de-escalated.

‘I try to behave online as I would like others to behave. I wouldn’t ever want to… I’ve never threatened anyone,’ the author said.

She explained that while she loves the ‘pub brawl’ atmosphere of Twitter, she now has a ‘love hate relationship’ with the platform after she took a year off from using it.

‘Social media can be a lot of fun and I do like the pub argument aspect of it. That can be a fun thing to do, but there’s no doubt that social media is a gift for people that want to behave.’

The author has also often tweeted critically about the use of inclusive language and spaces, most memorably retweeting a post which referred to ‘people who menstruate’ and adding: ‘I’m sure there used to be a word for those people. Someone help me out. Wumben? Wimpund? Woomud?’

Transgender activists say Ms Rowling’s stances are discriminatory and fail to recognise the difficulties that transgender and non-binary people face, but some feminists argue it is vital to retain single-sex spaces to protect vulnerable women.

Ms Rowling has also received backlash from claims she made in a bid to defend herself in 2020, including the claim that only people who are ‘privileged or lucky enough never to have come up against male violence’ support inclusive spaces.

She said: ‘I stand alongside the brave women and men, gay, straight and trans, who’re standing up for freedom of speech and thought, and for the rights and safety of some of the most vulnerable in our society: young gay kids, fragile teenagers, and women who’re reliant on and wish to retain their single sex spaces.

‘Polls show those women are in the vast majority, and exclude only those privileged or lucky enough never to have come up against male violence or sexual assault, and who’ve never troubled to educate themselves on how prevalent it is.’

Asked if she still speaks to cast members, she added: ‘I have…yes, I do. Some more than others but that was always the case. Some I knew better than others.’

Rowling, who was promoting her new novel The Ink Black Heart by her pen name Robert Galbraith, also spoke of the difficulty of going out in public and being recognised. 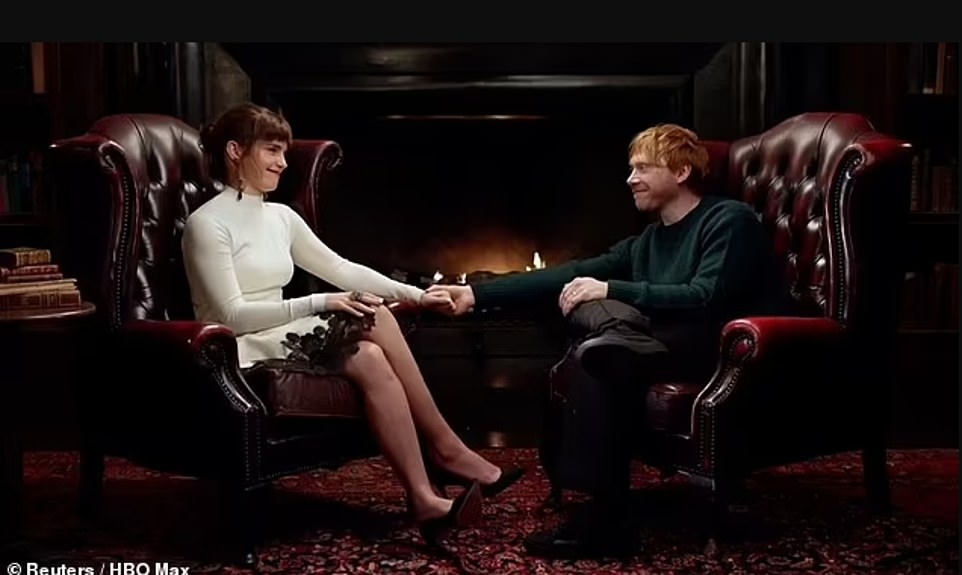 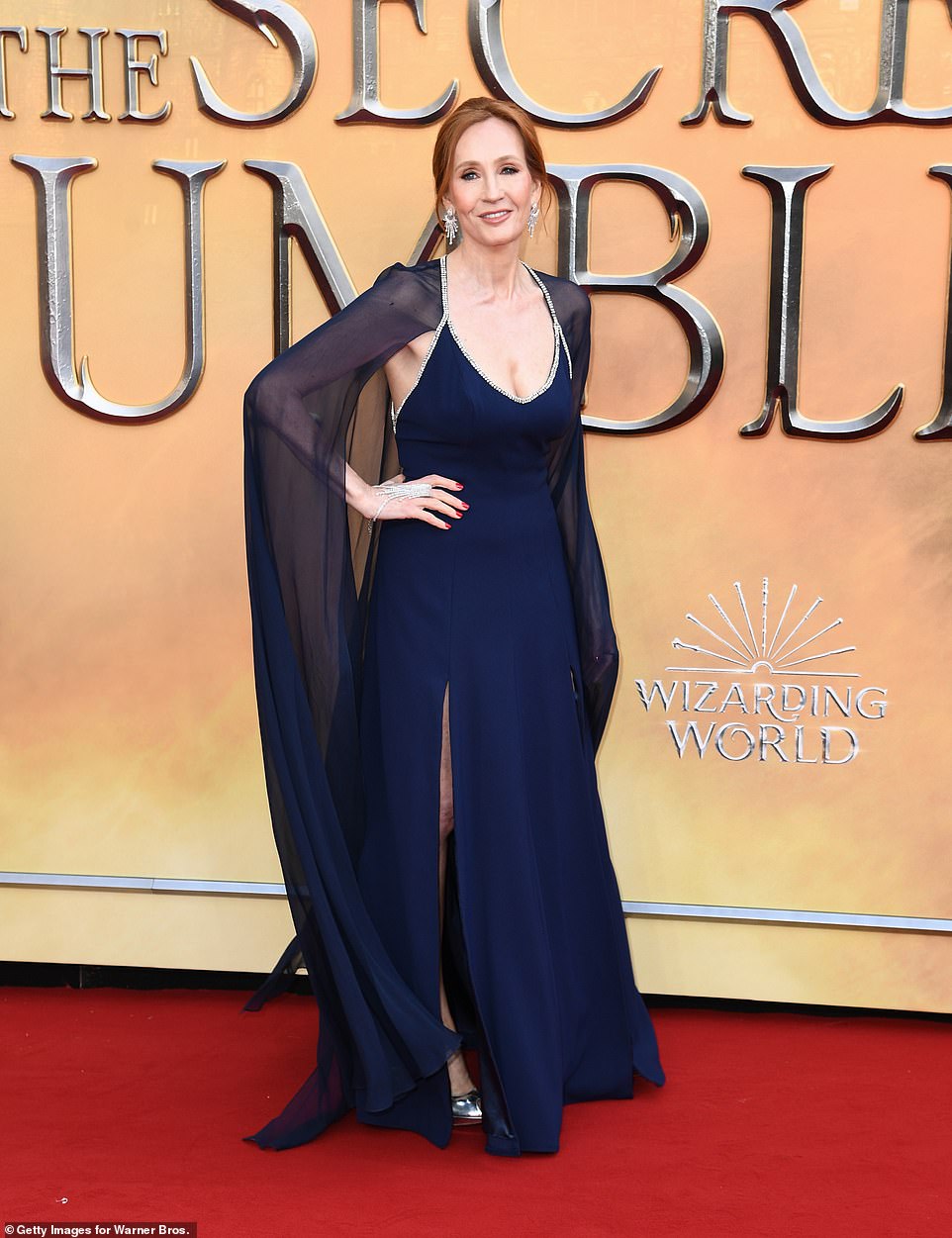 JK Rowling attends the Fantastic Beasts: The Secrets of Dumbledore world premiere at The Royal Festival Hall on March 29, 2022