Erin Molan has given an emotional farewell to her ‘hero’ father Jim at a moving funeral service for the senator, attended by high-profile politicians and military dignitaries.

Mourners arrived at the ANZAC Memorial Chapel of St Paul, in Canberra, on Wednesday morning.

The Liberal senator and former Army major general was diagnosed with prostate cancer in early 2021.

He died peacefully in the arms of his family on Monday January 16 at the age of 72.

Addressing the packed out service, Sky News presenter Erin hailed her father’s devotion to his family, remembering him as ‘a dad we idolized, we were inspired by, and who was our hero.’

In a brief moment of levity, she recalled the moment the former major general was diagnosed with prostate cancer. 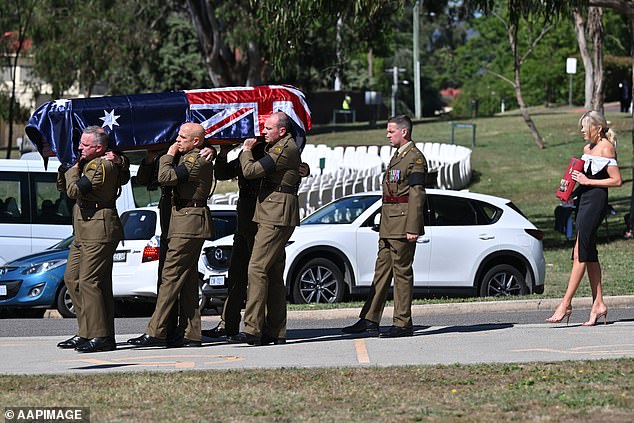 Erin Molan walks behind her father’s casket on Wednesday. Senator Molan died at the age of 72 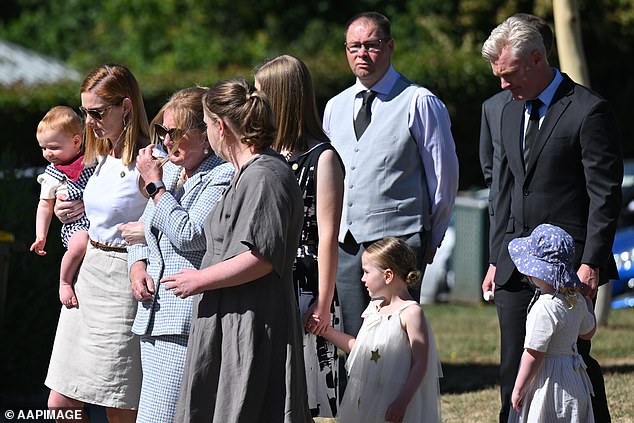 ‘We all rushed to hospital,’ she told the crowd.

‘I was on the couch, heaving and stoic and the rest (of Senator Molan’s children) were all being stoic.

‘After a while, my brother Mick came over, put his arm around me and said: ”Erin, I just want you to know, none of us think you’re trying to make this about you”.’

Senator Molan’s coffin was carried in through a military honours as bagpipes played Amazing Grace, and was followed by his family, who were seen wiping away tears as they approached the chapel.

Erin, led the group, dressed in black and carrying her father’s military medals. 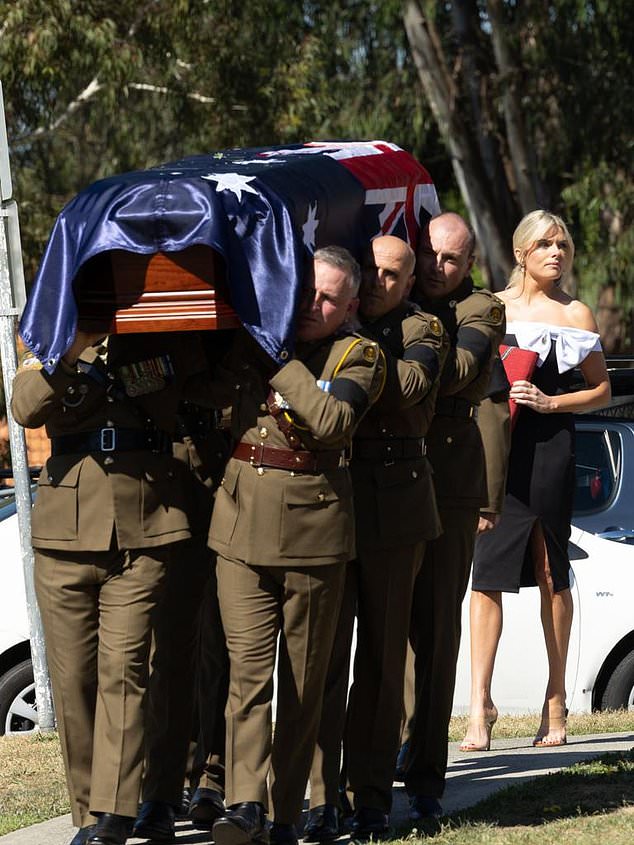 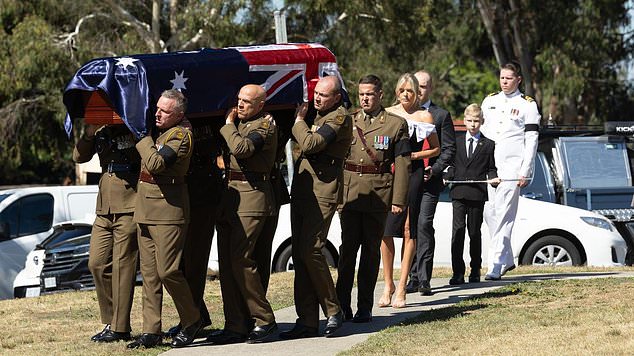 A requiem mass will be held in celebration of the life of Senator Jim Molan. Picture: NCA NewsWire / Gary Ramage 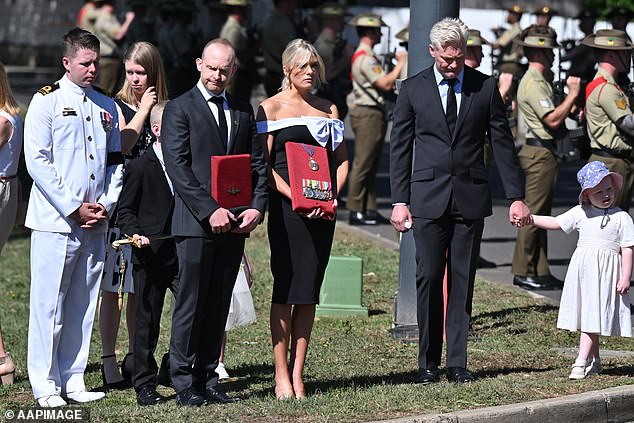 Once inside, the Senator’s coffin was guarded by a catafalque party – a guard that stands watch over the casket.

Speaking ahead of the funeral, deputy opposition leader Sussan Ley said she would miss her ‘dear friend’.

‘I have some wonderful recollections of Jim and his love for regional New South Wales,’ she said.

‘He just jumped in a car and he drove wherever he needed to, and there are long miles across the patch.

‘So he was a soldier. He was a senator. He was a servicemen to his country in so many ways, most recently in the federal parliament.

‘I will miss him as a dear friend and a dear colleague and I’m honoured to be here.’ 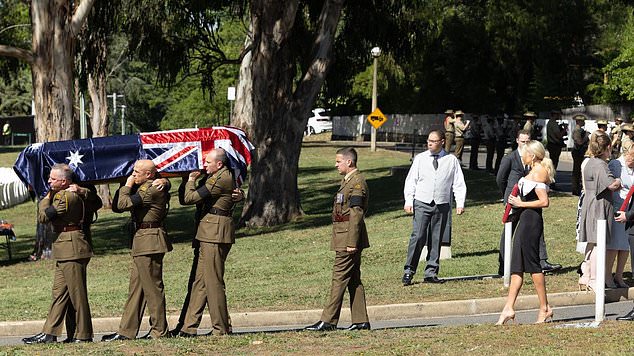 Erin led her family as they walked behind her father’s casket. Picture: NCA NewsWire / Gary Ramage 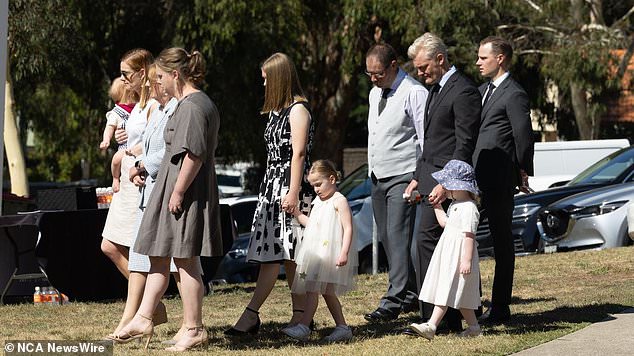 Loved ones of Senator Molan are seen at his funeral service in Canberra on Wednesday. Picture: NCA NewsWire / Gary Ramage

In a notice announcing his funeral, Senator Molan’s family urged donation to charity in his memory, in lieu of flowers.

Following his death, his loved ones said the loss was ‘immeasurable’.

‘He was many things – a soldier, a pilot, an author, a volunteer firefighter, and a senator,’ the statement read.

‘Most of all, he was an adored husband, father, grandfather and brother.

‘Our loss is immeasurable, but we are comforted in our memories of a full life courageously lived, devoted to family and in service of the country he loved.’ 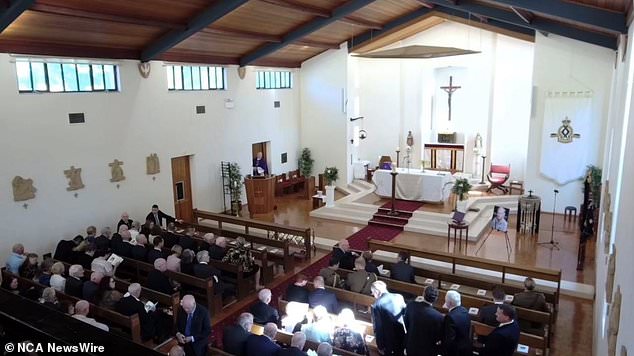 The chapel was packed for the funeral service on Wednesday. Picture: Supplied via NCA NewsWire

In his tribute to the senator, Liberal leader Peter Dutton said the nation has lost a ‘true patriot’.

‘Whether you knew Jim or met him for the first time, he drew you in immediately with his warm and captivating quality,’ Mr Dutton said.

‘In turn, you always had Jim’s undivided attention. He always displayed generosity to the views of others, even those with whom he disagreed.’

Senator Molan is survived by his wife Anne, four children and five grandchildren.

Prior to entering politics, the Senator’s military career spanned 40 years and has been credited as one of the architects of Operation Sovereign Borders – a hard line military-led policy to deter asylum seekers arriving by boat.

He entered parliament in 2017 after Fiona Nash was disqualified over her dual citizenship.

In 2019, he was relegated to the unwinnable fourth position on the Liberal Senate ticket but was later appointed to the casual vacancy caused by the departure of Arthur Sinodinos.

He was re-elected to the Senate at the 2022 federal election.