The White House physician updated the public on the First Lady’s condition on Wednesday, announcing that the executive branch’s medical team had removed a small lesion above her right eye that turned out to be basal cell carcinoma.

Dr. Kevin O’Connor, Physician to the President, said that in all cases, ‘All cancerous tissue was successfully removed.

‘As anticipated, the First Lady is experiencing some facial swelling and bruising, but is in good spirits and is feeling well.’

The news of her procedure comes just a couple of years after Dr Biden underwent ‘a common medical procedure’ at George Washington University Hospital though the purpose for the procedure was not disclosed by the White House.

Dr. Kevin O’Connor, Physician to the President, said the First Lady had three separate excisions: one above her right eye, one on her left eyelid, and another on her chest

Dr Jill Biden, 71, went to Walter Reed Military Medical Center on Wednesday to a cancerous skin leasion abover her right eye removed. She will undergo a Mohs procedure, which successfully excises skin cancers in 99 per cent of cases

Dr Biden and her husband the president arrived at the hospital on Wednesday morning at around 8am. The White House issued the status update on Wednesday afternoon.

Mohs surgery is performed in an outpatient setting and typically takes a few hours. Dr Biden was able to remain awake for the surgery, which requires just local anesthesia to numb the area.

The objective of a Mohs procedure is to excise as much cancerous skin tissue as possible while also doing as little damage to the surrounding healthy tissue as possible. It’s a gradual process and layers of skin are removed in steps.

First, the surgeon uses a scalpel to remove the surface level cancerous skin tissue with the understanding that there might be more cancerous tissue beneath the surface. Skin cancer is like an ice berg. The bulk of it is usually hidden under the surface.

The surgeon maps out where on the body the cancerous tissue was extracted, takes that tissue sample to the lab, dyes it, and cuts it into sections. Specialized technicians place those tissue samples on slides to be investigated under the microscope. 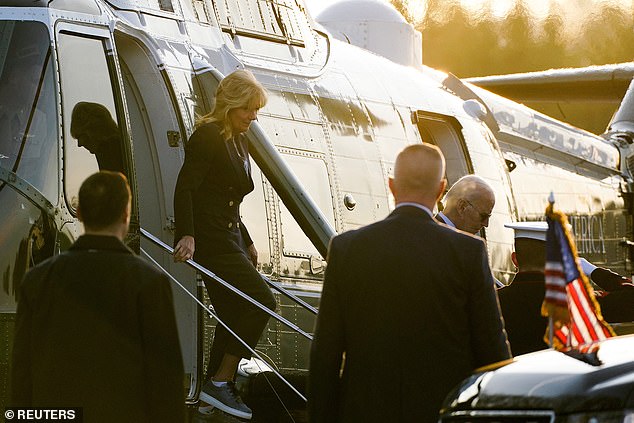 Dr Biden and her husband Joe arrived at Walter Reed at approximately 8am on Wednesday. The procedure is straightforward and relatively quick. The White House will issue an update on Dr Biden’s condition later on Wednesday 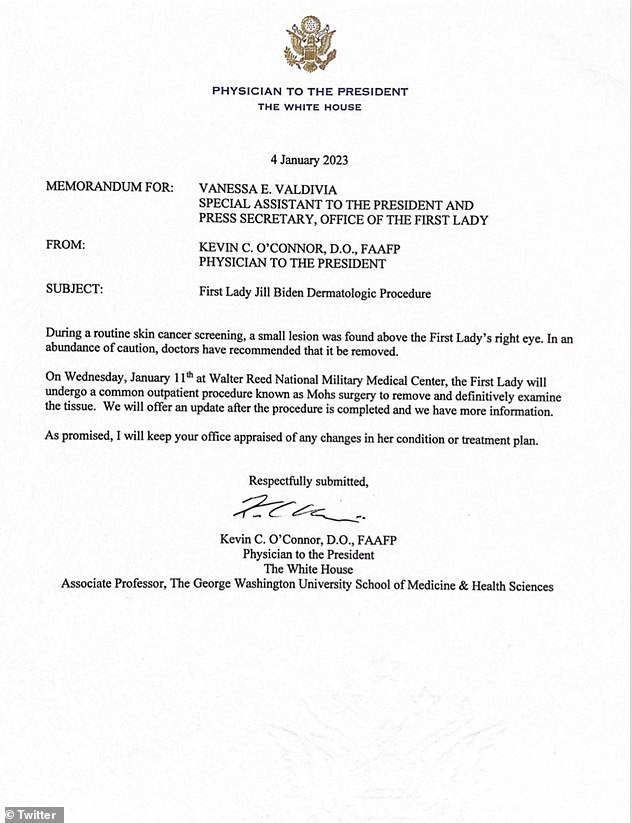 The doctor painstakingly examines the edges of each section of tissue for evidence of remaining cancer. If the surgeon finds cancer cells under the microscope, their location is marked on the map.

The process is repeated until the doctor can find no evidence of cancer in the sampled tissue.

Some wounds will be big enough to require sutures to close. They typically heal within a couple of weeks. Smaller wounds can heal by themselves in about a month.

Typically people are able to leave between two and six hours after the outpatient surgery, though the timing depends on the size of the area effected.

The procedure is extremely common. Mohs surgery is performed on over 876,000 tumors per year in the United States.

Basal cell carcinoma, meanwhile, is the most common form of skin cancer and the most frequently occurring form of all cancers. An estimated 3.6 million cases are diagnosed each year in the U.S. alone.

The rising rates of skin cancer are likely due to better detection and diagnosis capabilities as well as increased exposure to ultraviolet light, more time spent on outdoor activities, changes in clothing style, increased longevity, ozone depletion, genetics and in some cases, immune suppression.