Send in the clowns! Children dress as cowboys, pandas, and even Donald Trump in colourful fancy-dress show as they celebrate the ancient festival of Purim in London

The streets of north London were awash with colour today as hundreds of Jewish children dressed up in celebration of the festival of Purim.

Little police officers, Beefeaters, bears, Dobby the House Elf and a Boris Johnson skipped through Stamford Hill as they honoured the centuries-old tradition.

Typically, the event would see parades through the streets but the Covid pandemic meant this year’s festivities were a pared-down, socially distanced affair.

Dating back some 2,500 years, the ancient festival commemorates the survival of the Jewish people who had been marked for death in ancient Persia.

It celebrates the courage of Esther, Queen of Persia, who stopped a genocide of her people after the king of Persia’s adviser hatched a plan to murder all Jewish people.

These youngsters pulled out all the stops as they donned clown wigs, make up and fluorescent tights to mark the festival today 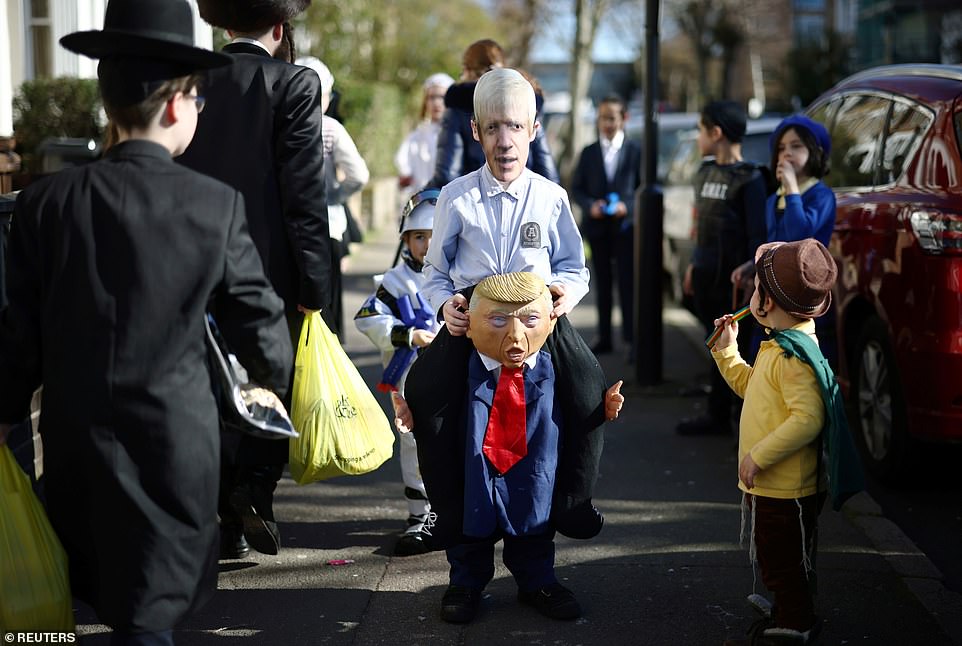 They look familiar: One child donned this rather unsettling costume in the likeness of PM Boris Johnson and former President Donald Trump 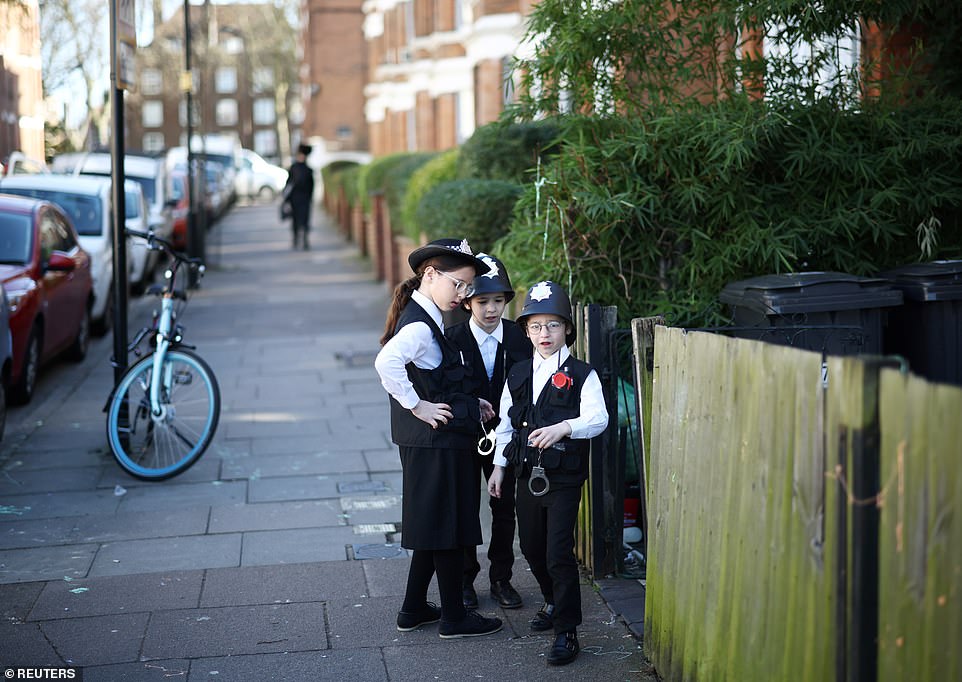 Allo’ Allo’ Allo’! These three youngsters looked ready to patrol the streets of London in their police get-ups 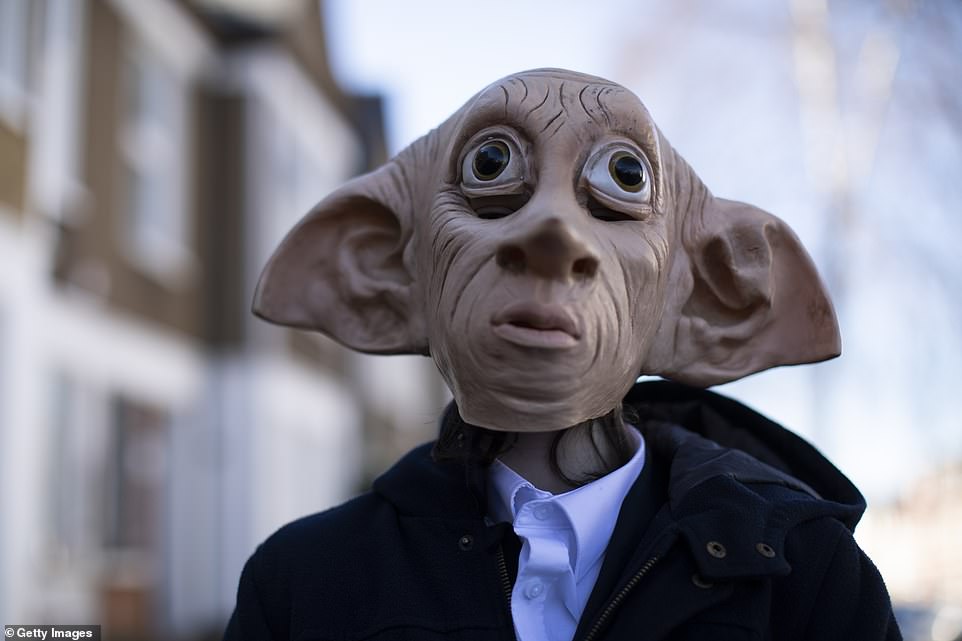 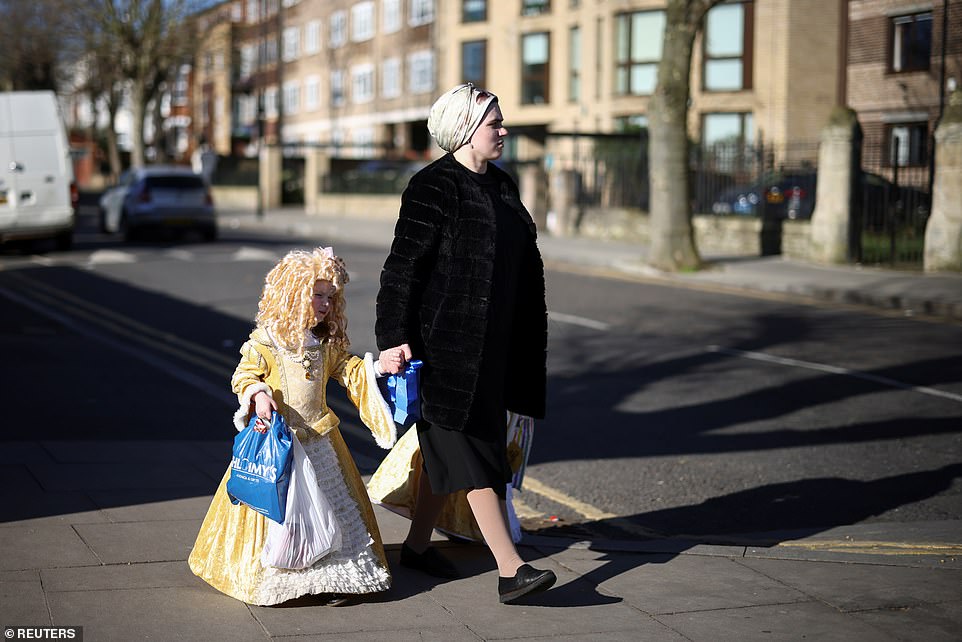 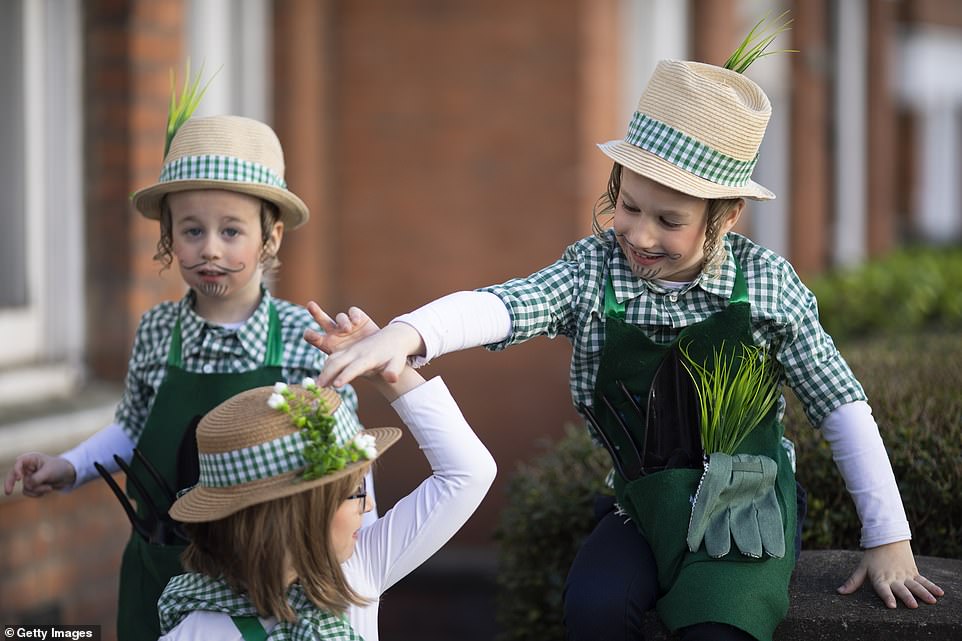 Siblings and friends wore matching dress for the day in London. Purim commemorates the defeat of Haman, the advisor to the Persian king, and his plot to massacre the Jewish people 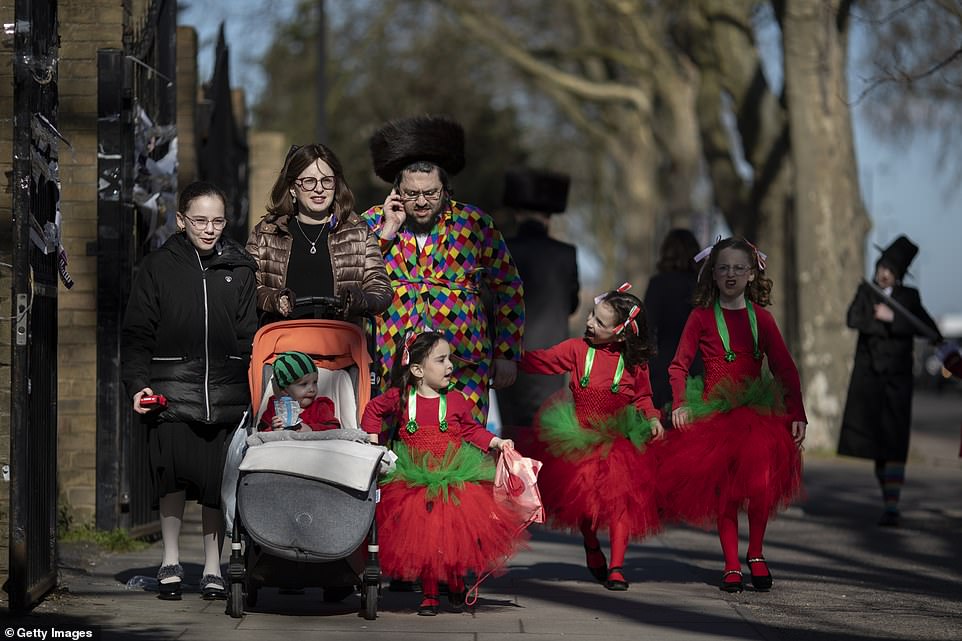 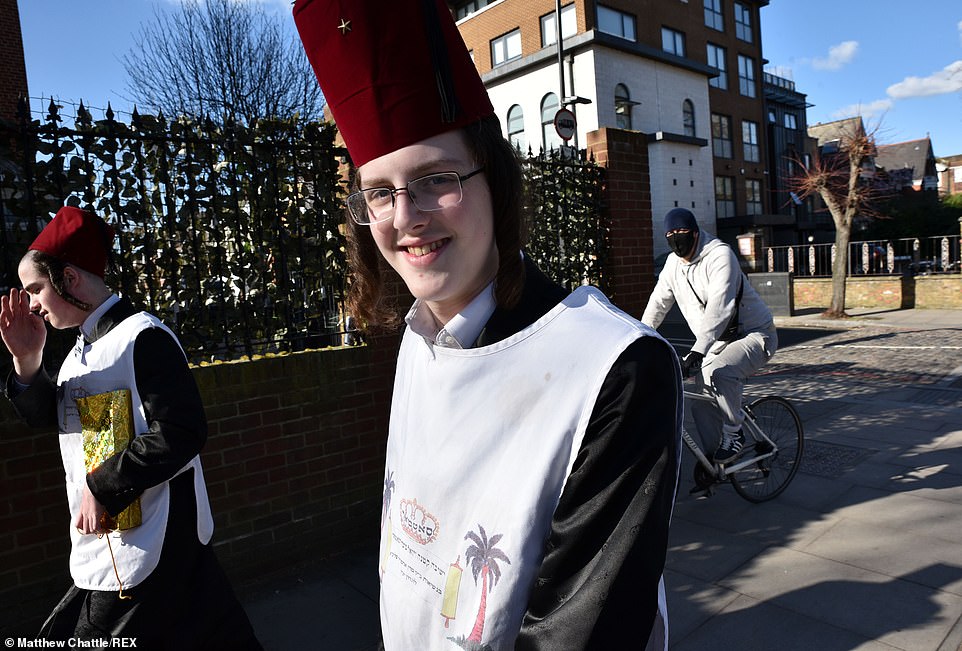 Dating back some 2,500 years, the ancient festival commemorates the survival of the Jewish people who had been marked for death in ancient Persia 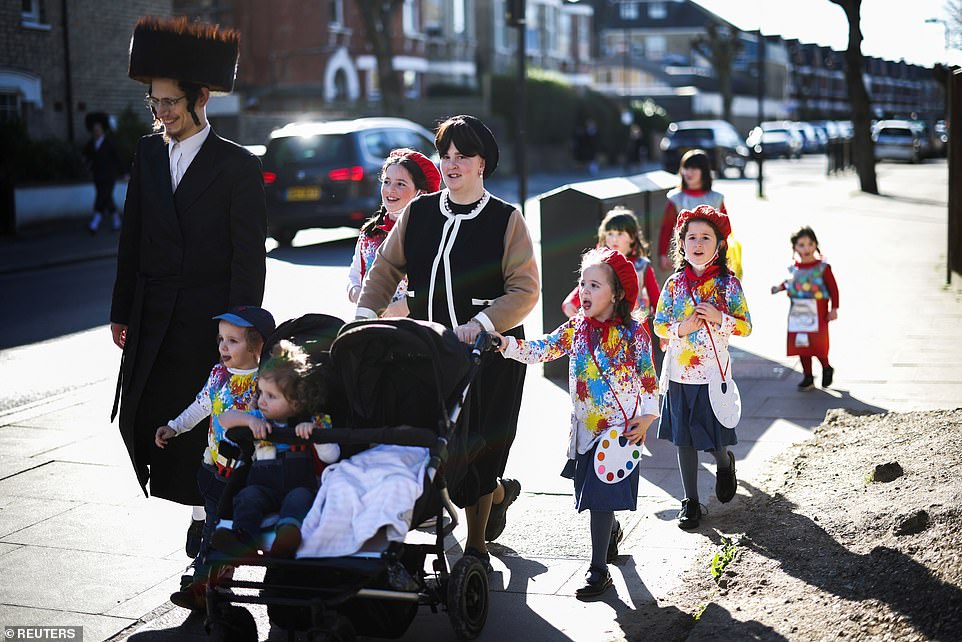 In Israel, even adults go to work wearing costumes and dress up to go to the synagogue.

The festival is celebrated on the 14th of the Hebrew month Adar. Jewish communities celebrate by listening to the Book of Esther which tells the story of a Hebrew woman in Persia, Esther, who becomes queen of Persia and thwarts a genocide of her people.

Esther told Jews to celebrate the special day and now, people march in parades across the world wearing costumes in honour of Esther, who masqueraded as a non-Jew to unveil the plot.

The story forms the core of the Jewish festival of Purim, during which it is read aloud twice; once in the evening and again the following morning.

The evening before Purim, Jewish people do not typically eat or drink, but during the festival they enjoy a lavish feast with wine.

Drunkenness is usually discouraged by Jewish law but it is considered a mitzvah – religious duty – to drink alcohol on Purim.

According to the tale, Haman’s ears were cut off as a part of his punishment. The cookies eaten on Purim, Humentaschen, translate to ‘ears of Haman’. 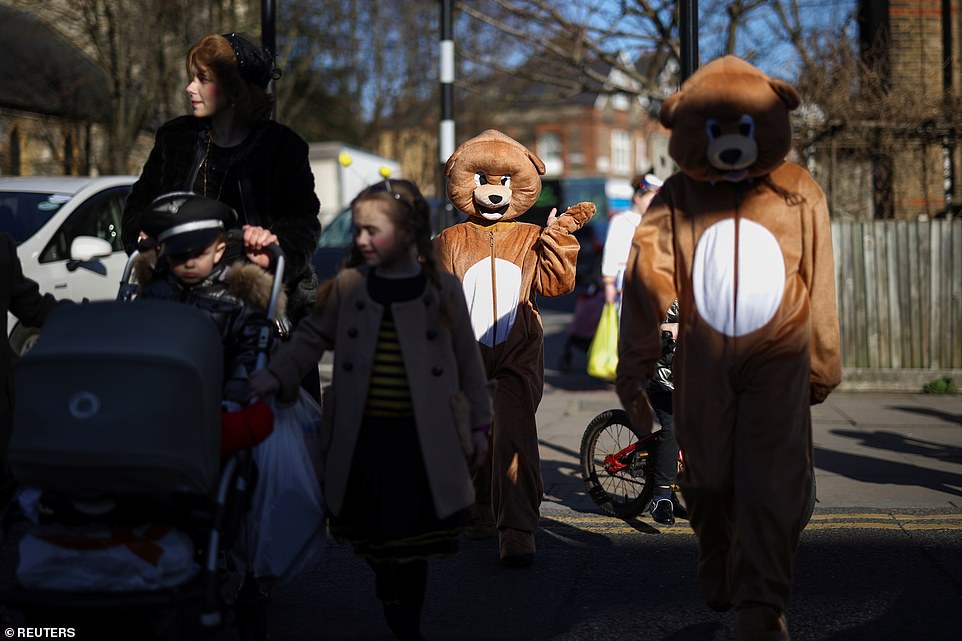 Costumes are worn on Purim in honour of Esther, who masqueraded as a non-Jew and dressed up as a queen to unveil the plot against her people

THE MEANING BEHIND THE STORY OF PURIM

The Jewish holiday Purim commemorates the salvation of the Jewish people in the ancient Persian Empire from a plot intended to wipe them out.

The story, which is recorded in the Biblical Book of Esther, tells the tale of how an advisor to King Ahasuerus named Haman planned to kill all the Jews, only for his wicked plot to be thwarted by the king’s wife Esther and her adoptive father Mordecai.

Haman had selected a day on which he would annihilate the entire Jewish population and had sent out a decree bearing the King’s seal, ordering that every Jewish man, woman and child be killed.

But Esther – who had been chosen as Ahasuerus’s wife by taking part in a beauty contest and concealing the fact she was Jewish – later convinced the King to send out a new decree allowing the Jews to rise up and defend themselves – thus saving their lives.

The story is read out in synagogues while children traditionally get dressed up as Esther, or the King.

In the synagogue they are given football rattles and noisemakers to drown out Haman’s name. 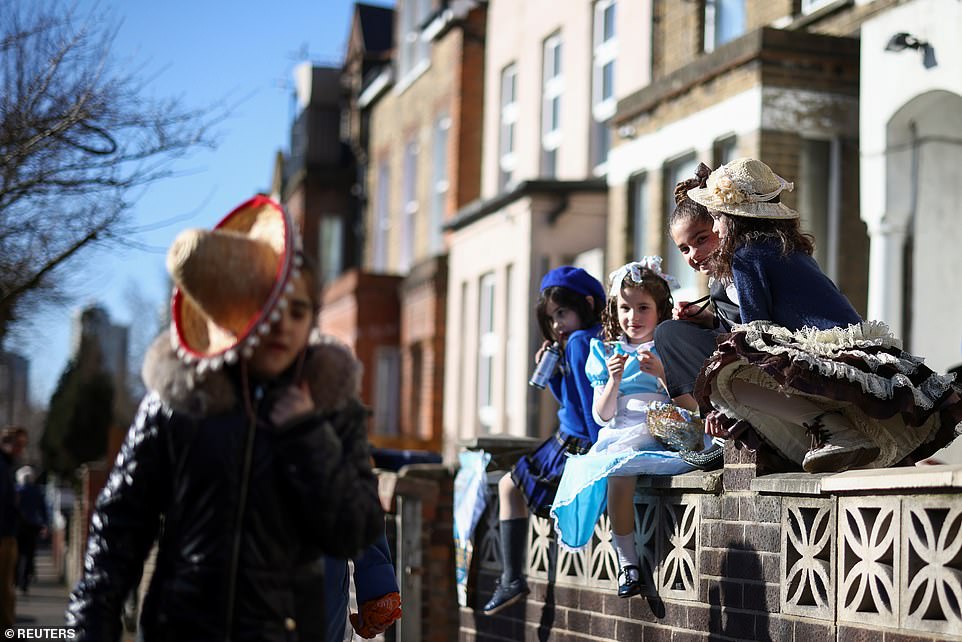 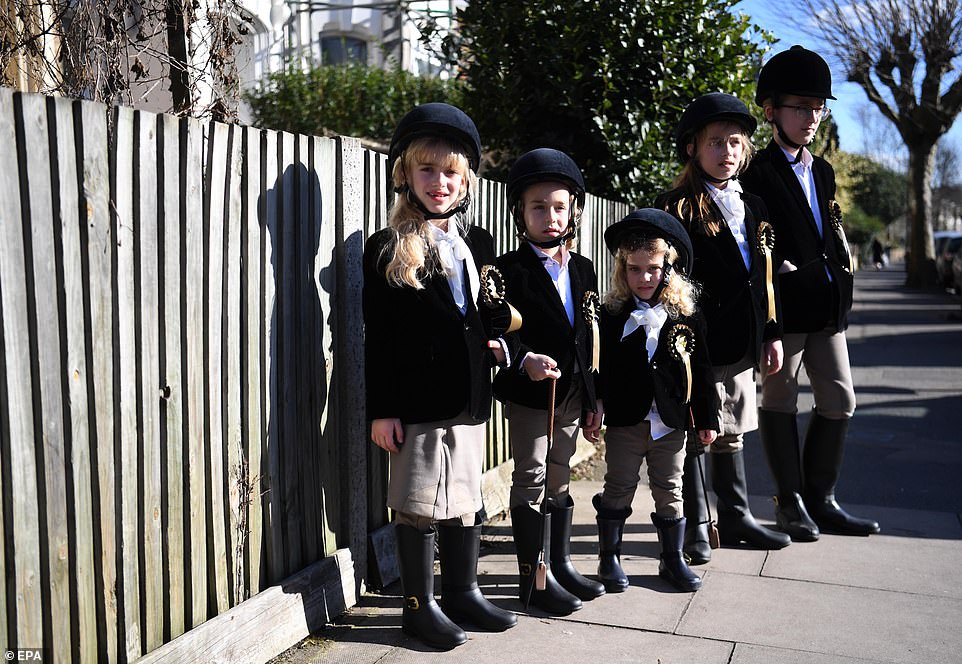 Inspired by dressage and showjumping, these youngsters donned matching jodhpurs, boots and hats for the event 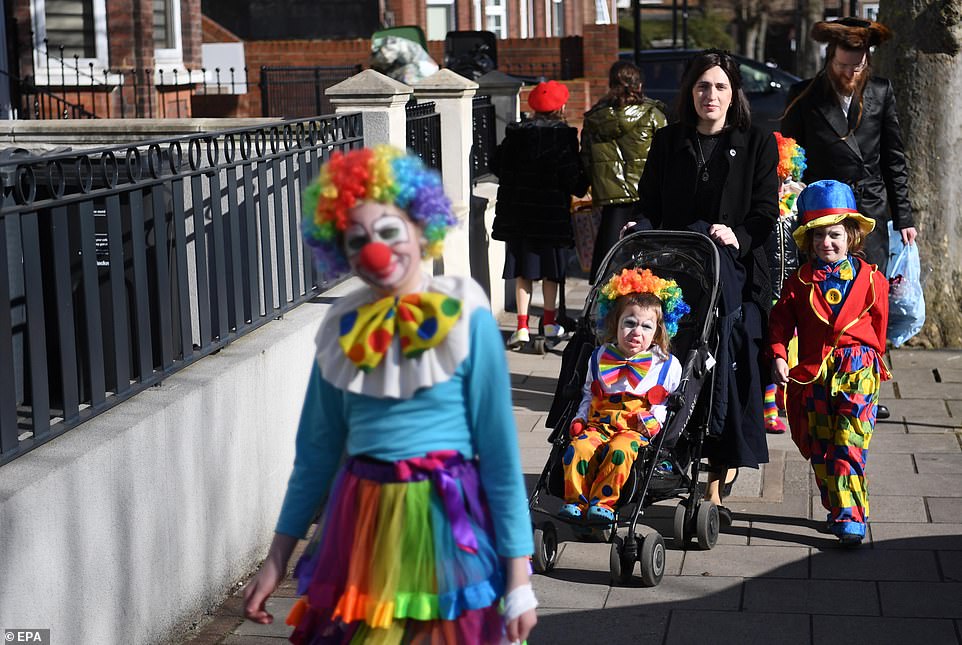