Married At First Sight star Jessika Power is the latest celebrity to go public about being diagnosed with ADHD (attention-deficit/hyperactivity disorder).

Speaking to The Wash, the 30-year-old revealed she was diagnosed with the disorder in her early twenties.

She said she was ‘given prescription medication’ to manage her symptoms but ‘it dulled who I am’.

The reality star explained she can’t take the medication because the change in her personality would be bad for her brand.

‘Now I’m a brand, I guess, and I found that if I’m dulling the hyper Jess, who says what’s on her mind, people aren’t interested,’ she said.

‘They want the fun, bubbly-all-the-time Jess, but when I was on medication I was spaced out [and] quiet,’ she added.

The blonde bombshell has become one of Australia’s biggest reality stars since shooting to fame on Married At First Sight in 2019. 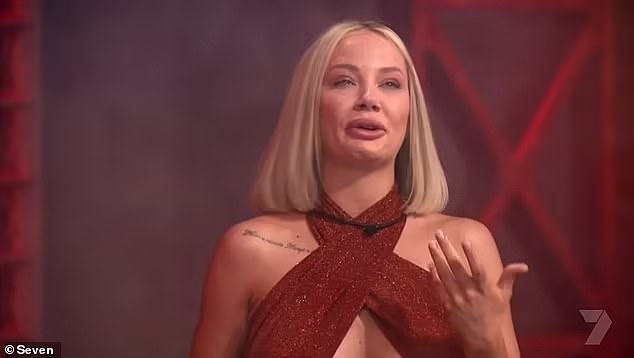 The reality star explained she can’t take the medication because the change in her personality would be bad for her brand. (Pictured on Big Brother VIP)

She appeared alongside Caitlyn Jenner on Channel Seven’s Big Brother VIP last year, before starring on Celebs Go Dating in the UK.

Jess is now a huge OnlyFans star, making upwards of $100,000 per month selling X-rated photos and videos of herself to subscribers.

In an emotional Instagram post, the 40-year-old said she’d been diagnosed with both ADHD and OCD (obsessive-compulsive disorder) by a specialist psychiatrist. 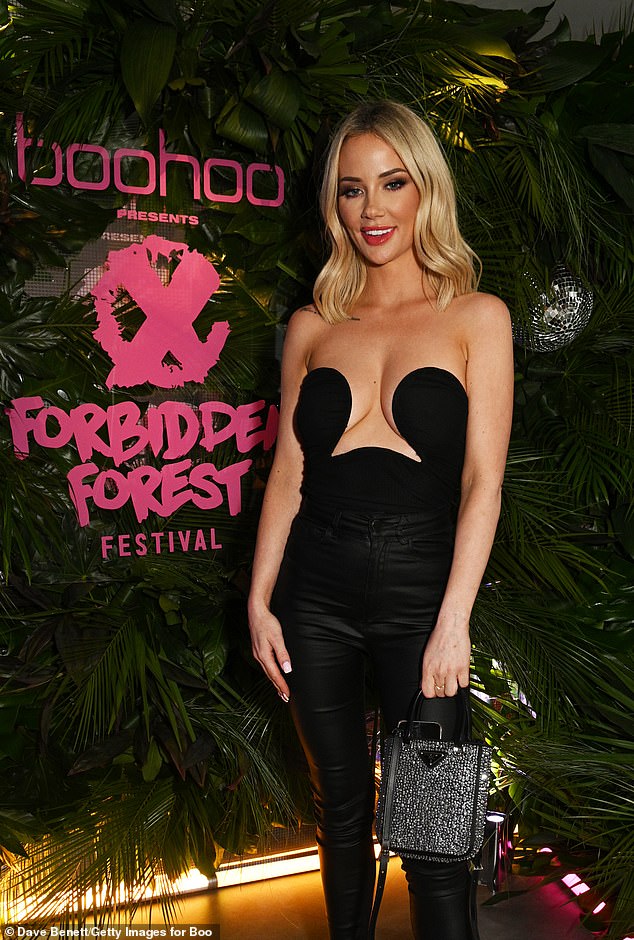 The blonde bombshell has become one of Australia’s biggest reality stars since shooting to fame on Married At First Sight in 2019, appearing on Big Brother VIP and Celebs Go Dating

‘I feel all the typical things people report feeling when a huge puzzle piece finally falls into place,’ she explained to her 214,000 followers.

‘Relief at finally understanding how and why my brain works the way it does; sadness for all the times I berated myself for being incapable, “stupid” and unreliable; and optimistic about a future that may not include quite so much confusion and anxiety,’ she continued.

The best-selling author went on to say she was proud of herself for her many achievements in life while being neurodivergent.

‘I also feel a strong sense of pride. I’m proud that I’ve managed to achieve the things I have despite the whirlwind that lives perpetually in my head. I’ve no doubt many of the things I’ve done have been BECAUSE of that whirlwind,’ she wrote.

‘I’m proud of the little girl who persisted when she was called overly sensitive, dramatic and capable of great things if she just “applied herself”.’ 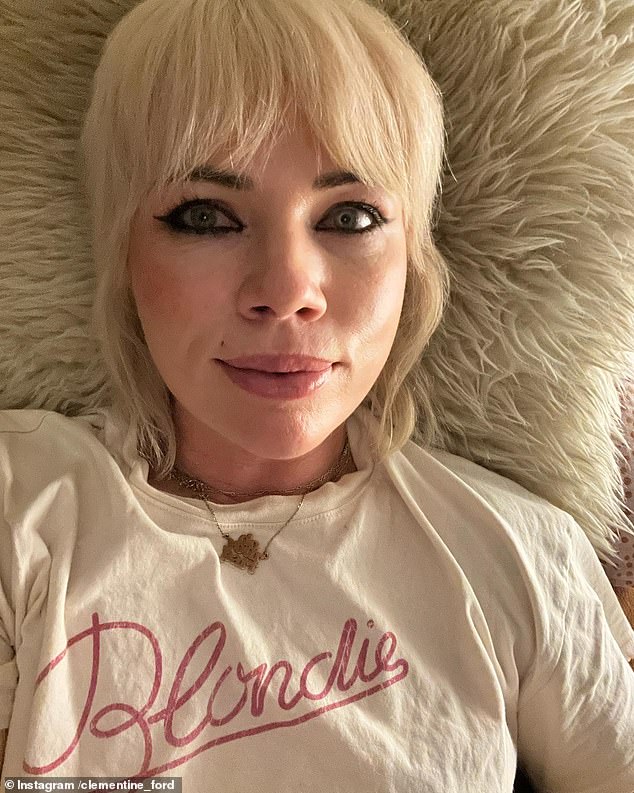 Clementine also explained the diagnosis made her understand more about her own behaviour throughout her life.

‘I have an explanation now for why I get super fixated on things (and conversely, why I never open bills), why I can be dogmatic in my approach to certain issues (working on that) and why I sometimes make impulsive choices that prove unwise after the fact,’ she said.

‘Many of the best people I know have ADHD! Artists, writers, musicians, activists, single mums – we contribute an amazing vibrancy to the world. We are cool b****es with beautiful brains, never forget it.’ 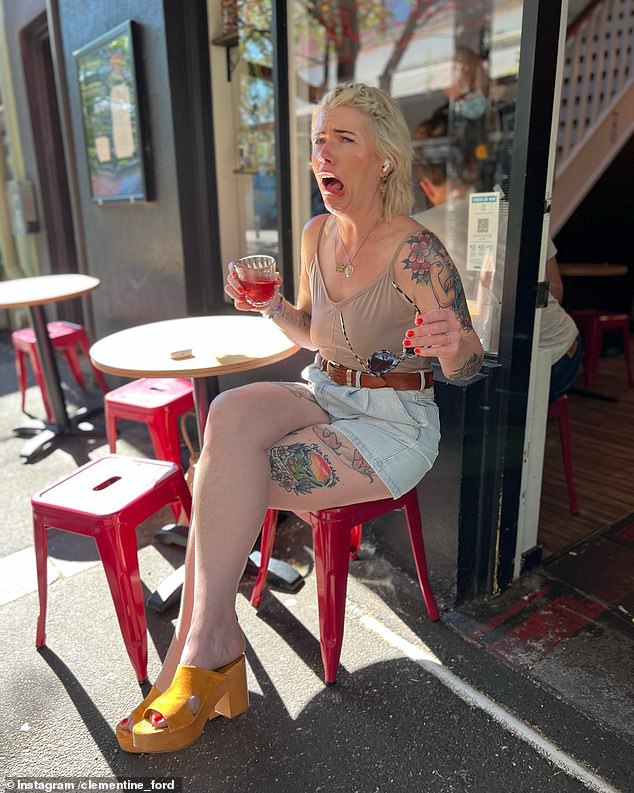 Clementine’s diagnosis follows a string of other stars who have bravely come forward to share their own experiences with neurodivergency in recent months.

‘I legitimately thought ADHD was for troublesome primary school boys. But nope, it’s me to a tee,’ she said. 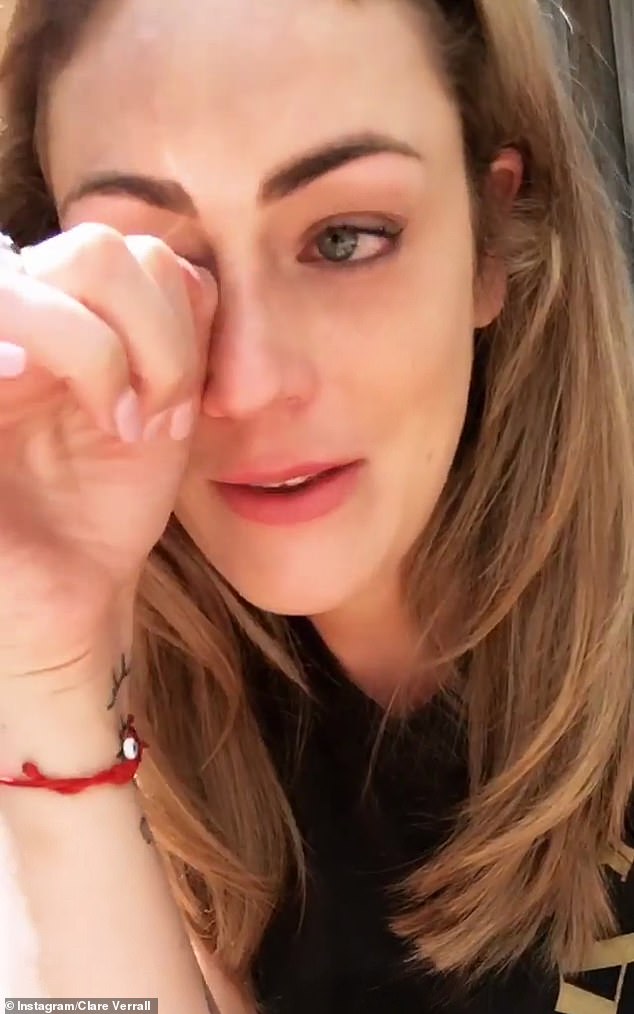 Abbie confirmed her diagnosis on her Hit Network radio show last month, saying she’d been looking for an explanation for her symptoms for 18 months.

The Bachelor in Paradise alum also said she was disappointed the process was so ‘inaccessible’ to many, after going to great lengths to get an appointment with a psychiatrist, which eventually cost her ‘around $700’. 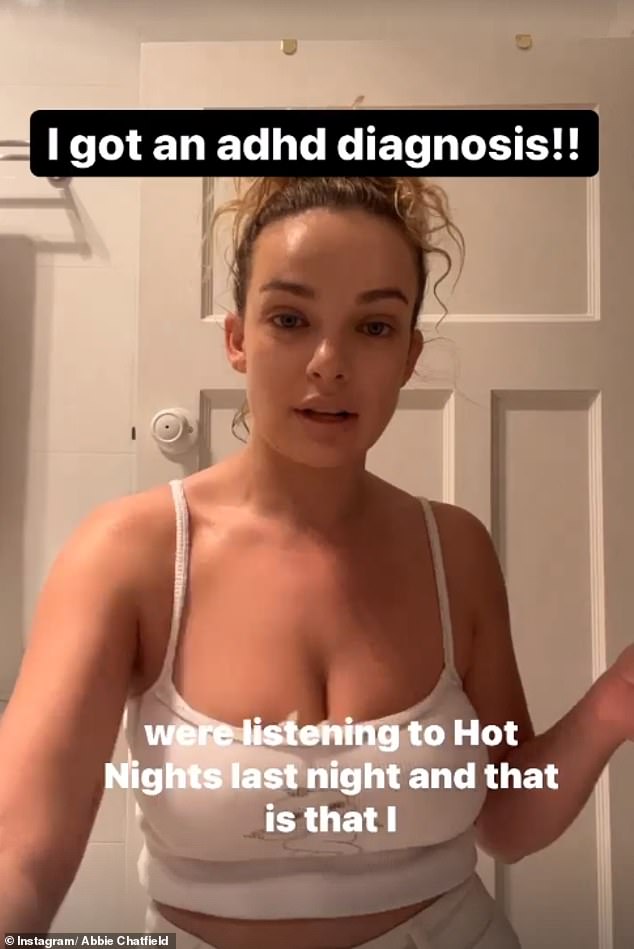 Abbie Chatfield (pictured) confirmed her ADHD diagnosis on her radio show last month, saying she’d been looking for an explanation for her symptoms for 18 months

‘I’m very happy to say, she got a diagnosis,’ Abbie told her co-host Rohan Edwards.

‘Now I am going to go on medication, the psychiatrist said that I can listen to podcasts, and there’s lots of different coping mechanisms that I can research.’

ADHD is a mental health condition with symptoms that include trouble focusing, hyperactivity and impulsive behaviour.

The adult condition is treated similarly to that of childhood ADHD, with medication and counselling, according to the Mayo Clinic. 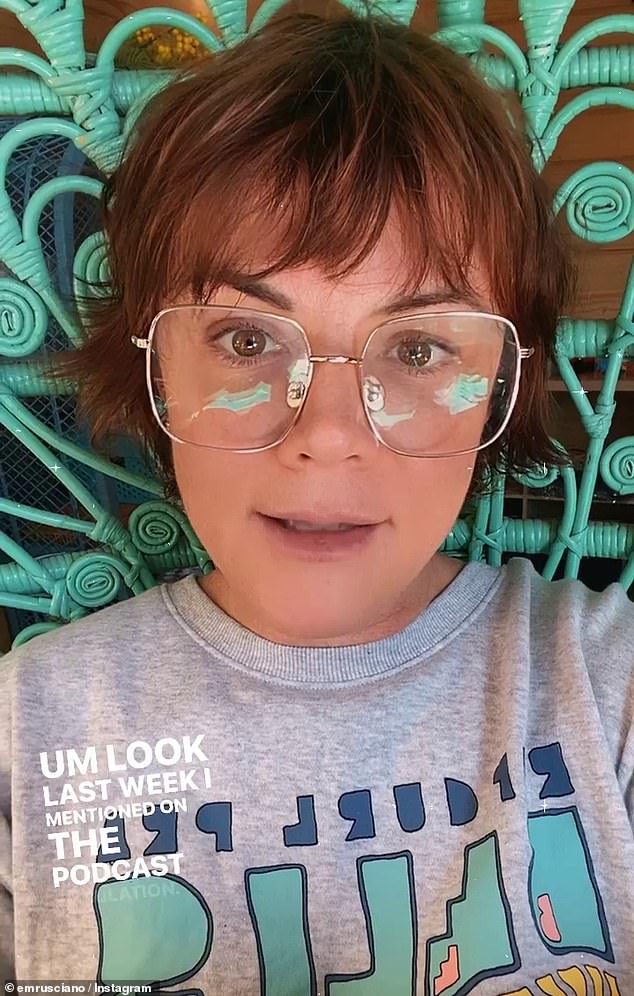 ‘My whole anxiety is feeling that I’m always behind on something – you know, like on holiday, and you think you’ve forgotten something very important? That’s my feeling at all times,’ Abbie said.

In an Instagram video explaining her symptoms, Abbie said she was ‘unable to sleep a lot’ because of her constant flow of thoughts, and often forgets where things are. She also goes through periods of ‘hyperactivity’.

Speaking about the process of getting an appointment, Abbie revealed she’d paid her personal assistant to spend an entire day finding her one. 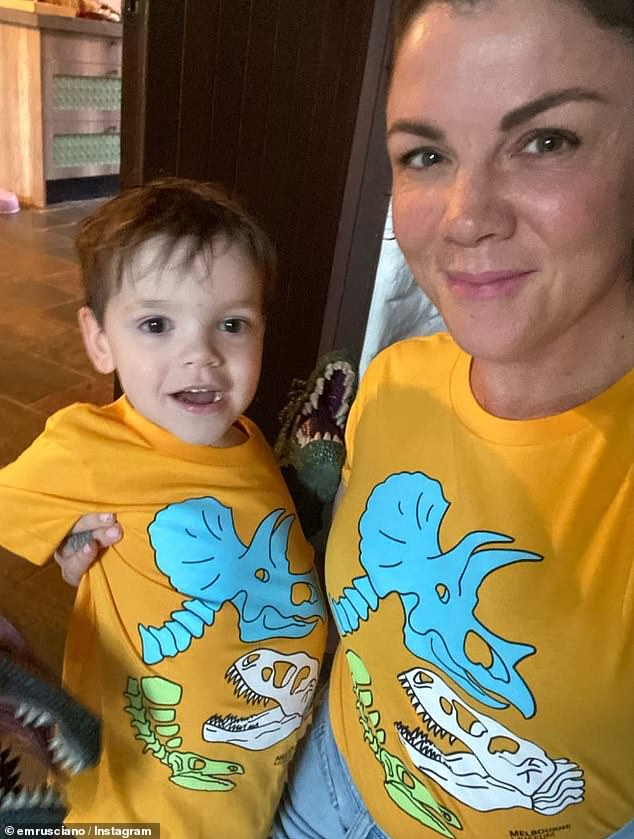 Em’s son Elio (pictured) also has autism, and her daughter Odette has ADHD

Fellow podcaster Em Rusciano shared her ADHD diagnosis recently. She is also on the autism spectrum.

Her three-year-old son Elio has been diagnosed with autism, too.

‘I’m really focused on making sure that he gets to be all that he is, I understand what it’s like to move through life with our brain, and I don’t want it to be anything like it has been for me, for him,’ she said on Instagram.

Last year, Em revealed her 14-year-old daughter Odette had been diagnosed with ADHD as well. 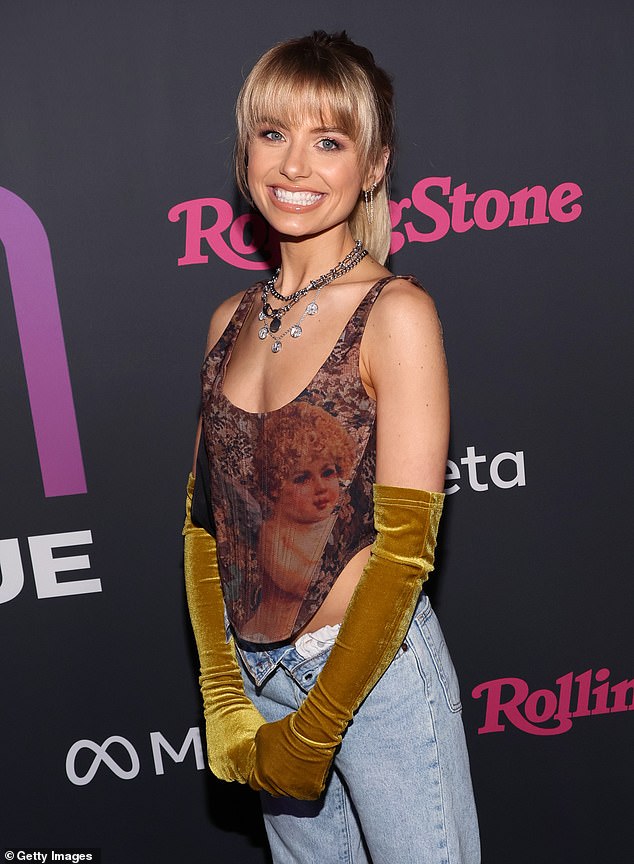 In February, American Bachelor star Demi Burnett (pictured) announced she had been diagnosed with autism

Outside of Australia, a growing number of celebrities have also come out about their battles with autism and ADHD.

In February, American Bachelor star Demi Burnett announced she had been diagnosed with autism.

She now has her own podcast where she discusses her journey as an autistic adult and speaks to other neurodivergent celebrities.

In the UK, model and TV personality Christine McGuinness shared her autism diagnosis last year after her three children were diagnosed.

Symptoms typically appear at an early age and become more noticeable as a child grows. These can also include:

Most cases are diagnosed between six and 12 years old. Adults can also suffer, but there is less research into this.

ADHD’s exact cause is unclear but is thought to involve genetic mutations that affect a person’s brain function and structure.

Premature babies and those with epilepsy or brain damage are more at risk.

There is no cure.

A combination of medication and therapy is usually recommended to relieve symptoms and make day-to-day life easier.